Wednesday, November 26th, Addis Ababa - The plan this day was to catch a flight to Mek'ele in the northern highlands of Ethiopia. As luck would have it, this was not to be.

We had a nice breakfast in the Dessie Hotel's restaurant. On the television, as had been the case on all the televisions in the airports the day before, are scenes of burning cars in the United States -- the Ferguson verdict had just come out. It reminded me of how misleading the news can be, just like an alarming number of people in the States seem to think ebola is all over Africa because of what they see on the news , to see the news in Africa you could easy get the impression that the entirety of the United States was filled with burning cars and riots at the time.

Around noon we checked out of the hotel, and loaded our stuff into the hotel's car. They had courtesy survice to and from the airport, which was nice because it was way across town. In this case, they obligingly agreed even to take us on our planned adventure of visiting the Ethiopian Airlines office downtown and then meeting some friends of mine for lunch before continuing on to the airport. All for no charge!

Driving through the city of Addis one definitely gets the impression of a lesser level of development than Nairobi. I was told that Addis is trying to set itself up as a regional capitol for all of Africa, and they do have the African Union headquarters (a distinctive tall clean modern building not far from our hotel), but Nairobi is going to give them tough competition. Traffic's certainly better than Nairobi -- there can still be traffic on the main thoroughfares in the city but everywhere outside of Addis there seemed to be a downright sparce number of vehicles on the road. I'm told cars are outrageously expensive, even compared to developed countries, due to both the cost of importing them and a tax on them somewhere in the range of 100%. One might get the false impression the roads in the capitol are all dirt, but that's just because they seem to perpetually have about an inch of mud over the asphalt. The whole city seemed like a giant construction yard, with seemingly every fifth lot being under construction. Another fifth of all lots seemed to be a bank for some reason. I guess the government is trying to heavily encourage investment by mandating a large number of physical banking locations, which seems to be a heavy handed and misguided development strategy sadly typical of the government.
One interesting thing I saw more than once at these construction sites -- women, wearing hard hats, caked in dried mud, operating cement mixers and other construction equipment .. wearing dresses. 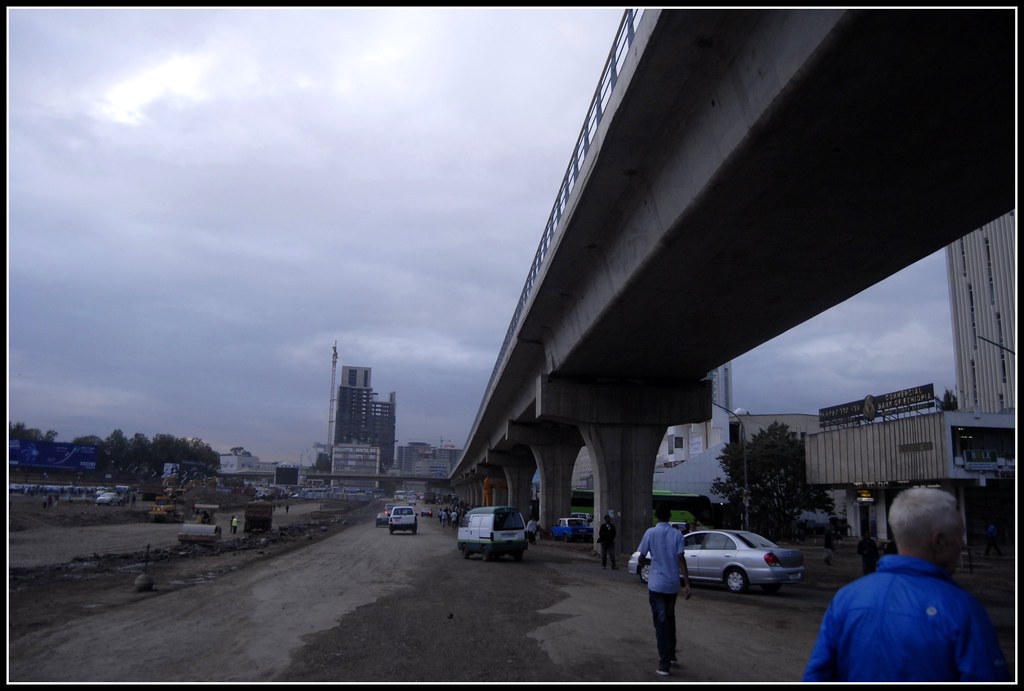 The Ethiopian Airlines office downtown turned out to be very crowded and busy. We took a number and it took about twenty minutes before it came up. We'd reserved our flight to Mek'ele through a travel agent friend of our friend Simon way back in Moshi, so we anticipated this just being a matter of paying for the ticket and physically receiving it. As it turns out flights for the next day would cost half as much (around $150 round trip vs $300), I forget if this was higher than what we'd been told back in Moshi or if the next day was just cheaper than we'd been aware of. While we were at it we booked the rest of our Ethiopian flights -- I'd be leaving Mek'ele earlier than Doug to fly to Bahir Dar, spending one full day there, and then returning to Addis, and then to Nairobi one day earlier than Doug. While our flights home from Nairobi were both on the 7th of December, mine was 20 minutes after midnight on that date (ie really the night of the 6th) and his was the evening of the 7th, and he'd decided he hated Nairobi and didn't want to spend one more minute there than he needed to. It took us about forty minutes to make these plans, and they only had one chair for the two of us, and I had to lean over the counter to hear the agent, so it was all kind of tedious. Also, these plans would of course later change. But my flights came out to less than $200, which was nice.

Next we proceeded to meet my friend by the piassa. When I'd been in Ethiopia in 2012 my friend my interpreter in Nigeria (Dayo) had put me in contact with a girl (Etfwork) he for some reason knew in Ethiopia, but we'd never managed to meet. Still though we'd been facebook friends ever since, which, you know, makes us practically related. When you meet up with an Ethiopian girl, it seems they invariably show up with a friend. Usuaully they don't warn you ahead of time but on this occasion she advised me she was bringing her sister Rahel, which was great because I'd have Doug with me as well.
The Piasso area seemed a little more of an upscale shopping area than the rest of town, not that the road wasn't still covered in mud, but fashionably dressed girls with glittery purses were strolling about. My phone plan didn't work in Ethiopia so we had to depend on a time set hours before and a general location "by the cinema by the piassa." We had our driver drop us off and then find somewhere nearby to hang out while we went looking for the girls. I wasn't sure exactly how we were to get ahold of him again either as we disappeared into the crowd. I was really worried we'd never find them but a few minutes later a girl was hailing us through the crowd, it was Eftwork! A few minutes later her sister joined us and we all sat down in a cafe for a quick cup of coffee.
Both girls, as it happens, were gorgeous. Eftwork very extroverted, with an explosion of curly brown hair; Rahel was much more introverted, her black glossy hair fell in cascades over jangly gold earrings, and she was very quiet, especially at first. She had recently graduated from Bahir Dar University, and also earned a lot of points with me when I asked what her favorite movie was and she said she prefers to read. Their family was originally from Eritrea, but when war broke out between Ethiopia and Eritrea in the 90s they were permanently separated from that country.

A quick word about Ethiopian names, Rahel seems to be the most common girls name, with Samrawit a close second in my highly informal polling. Among the guys it seems to be Daniel and Girmay. Haven't met any other Etfworks. An occasionally-encountered girls name I think is pretty cool is Tsion.

From there we went to buy a new piece of luggage for me, since my tiny piece of luggage could no longer hold all the sweet loot I'd accumulated (I just had a little 5kg sports bag). Bought a bigger piece of wheeled luggage from a roadside vendor as it began to drizzle (had been dreary all day). Then we returned to our hotel to check back in, since we were no longer leaving that day. Our driver seemed a bit miffed that we weren't going to the airport as planned, and I felt a bit like we'd accidentally taken advantage of the hotel's free airport shuttle to just go around town, but we tipped the driver very well and this more than satisfied him. Had lunch at the hotel restaurant: 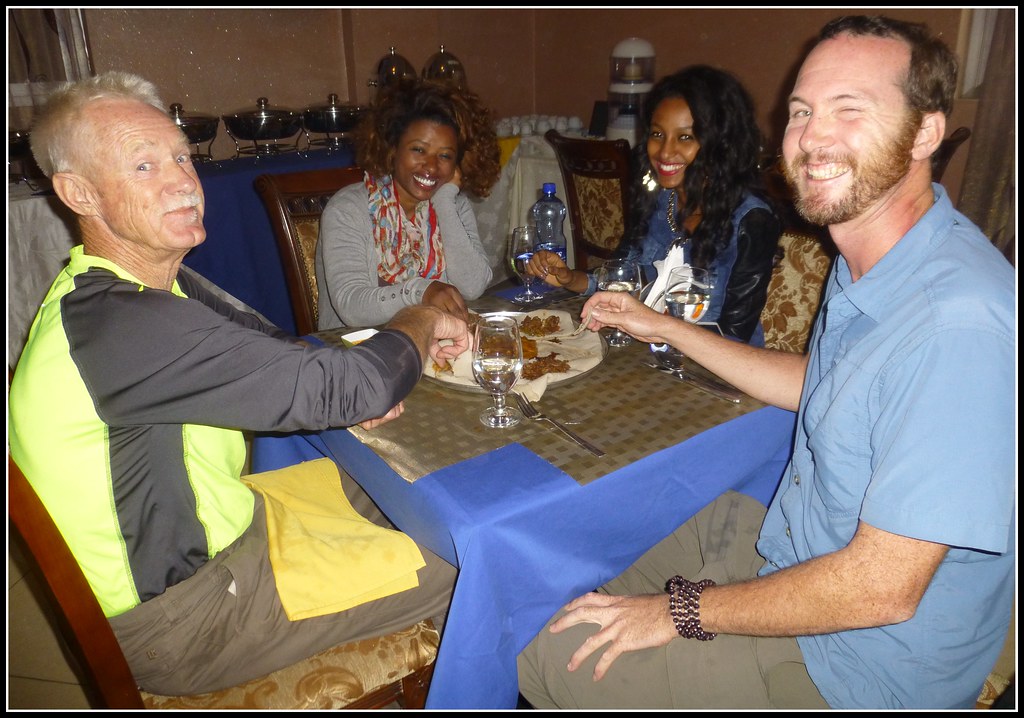 We then took a taxi back downtown and the girls showed us around. One sight that left a particularly strong impression was the "Red Terror Museum." In the early eighties the monarchy under Emperor Haile Salassie was overthrown by a communist regime called the Derg (which just sounds evil in my opinion), and it was, predictably, tyrannical and oppressive. The Red Terror museum had many exhibits pertaining to this, among other things a room with shelves and shelves and shelves of human skulls recovered from a mass grave. That was.. very sobering. The docent was a very dignified and well spoken man in maybe his forties, but completely bald. He told us how he was arrested when he was 15 for no reason, and spent the next eight years being tortured and in captivity. Specifically I remember he said they pulled his toenails out. Even when he was finally released, he didn't know what to do, he'd spent his formative years in the depths of a dungeon and he was still watched and persecuted by the government, had no friends, no family left, people were afraid to help him because they knew the government was watching him. In particular he seemed to get a bit emotional when he talked about how the leaders of that cruel regime had had their sentences pardoned and lived free to this day.

I've always studiously avoided being out in an African city after dark but as the sky darkened the girls seemed unworried, and I figured if they felt safe I probably shouldn't worry. Doug wanted to visit an Ethiopian church so we went to the one right downtown. Ethiopian churches aren't mainly buildings, like most churches, so much as an enclosure with a building in the middle -- the priest preaches from the porch of the building to congregants around it. The enclosure if full of trees. So even in the city, the enclosure of the church is a refuge of shady trees. In this case it was some sort of holiday, so from the moment we entered the enclosure gate there were crowds of people with candles. A long walkway led up a slope to the church grounds, and htis was lined by people with candles. When we reached the top there was a small ocean of candles, no light but the thousands of candles. A very gentle rain was falling in slow fat drops, just enough to seem mystical. It was beautiful.

After this, Doug went back to the hotel, not being much of a night owl. Leaving me alone with two gorgeous Ethiopian girls, that devil! ::shakes fist!::
We took a local taxi bus -- mini-busses that go around set routes and are packed with people, to the Bole neighborhood near the airport to a traditional dance hall. I was kind of expecting it to be all touristy but nearly everyone else there was local. Apparently its a Thing, and the locals actually go to these things, wherein traditional dancers perform on a stage while the audience sits around tables eating traditional food (which they also eat every day so I guess its just "food" to them), and every now and then the dancers come down and dance with people in the audience or even kidnap them on to the stage. Amusement is had by all. Here's a super short clip of one of the dances:

As for traditional food I specifically ordered a plate with some of the raw beef dish on it. When I'd tried raw beef during my first visit I hadn't been able to enjoy it because I was sure I was about to die of some horrible disease. I afterwards googled it and found that there's actually no significant health risk to eating raw beef, so I wanted to give it another try now that I was fortified with this knowledge. Also drank tej, the traditional Ethopian mead (a mead with hops). Altogether had a thoroughly lovely time. The girls flagged down a taxi for me and negotiated a good rate to my hotel (always really helps to have a local friend negotiate your taxi fare, since they'll know what's an outlandish rate while you might not), and I returned to the hotel after a thoroughly delightful first day in Ethiopia. 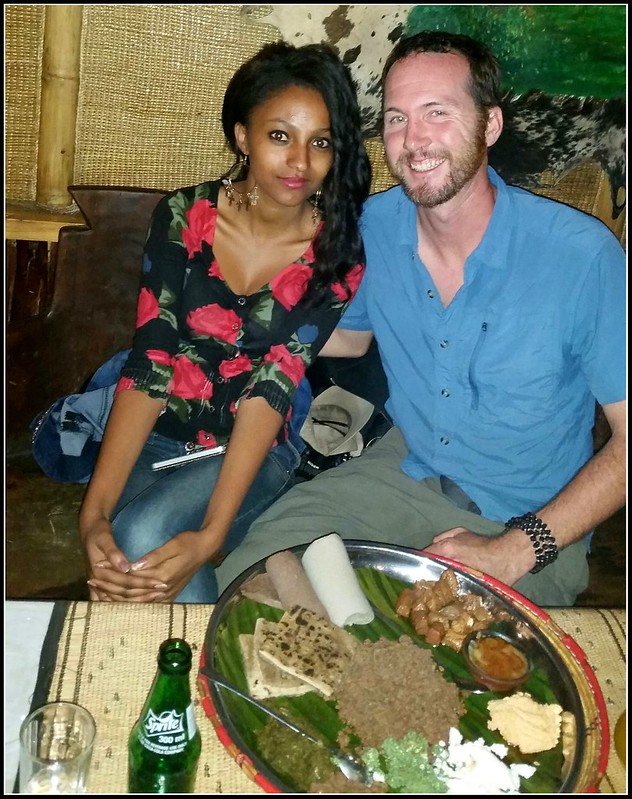