Thursday, November 27th, Mek'ele - Approaching the airport, it looked like we were landing in the midst of a rugged and dry desert, but on exiting the small aircraft we were met with a refreshing cool breeze. The Sky was clear and blue, the air was dry. The plane had been unusually full of squalling babies.
My friend Daniel picked us up in a landrover emblazoned with "Comel Enterprises." I had met him last time as he runs the Comel ("computers and electronics") honey processing plant.

From the airport the road curves around a low hill, surrounded by dry plains filled with teff fields and then descends into a valley in which the city of Mek'ele suddenly appears before you. You descend down a road that curves down into the valley as if you're coming down the banked curve of a waterslide, deftly passing carts piled with goods and pulled by donkeys. At the bottom you find yourself in a city with broad clean streets and you notice that not only are the roads cobbled, but the buildings are also all made of roughly hewn stone. There's very little vehicle traffic on the streets, though during my first visit we had to wait for a camel caravan to pass on the way in. Altogether Mek'ele was a nice relief from the traffic and crowds of Nairobi and Addis, and the dreariness and mud of the latter. 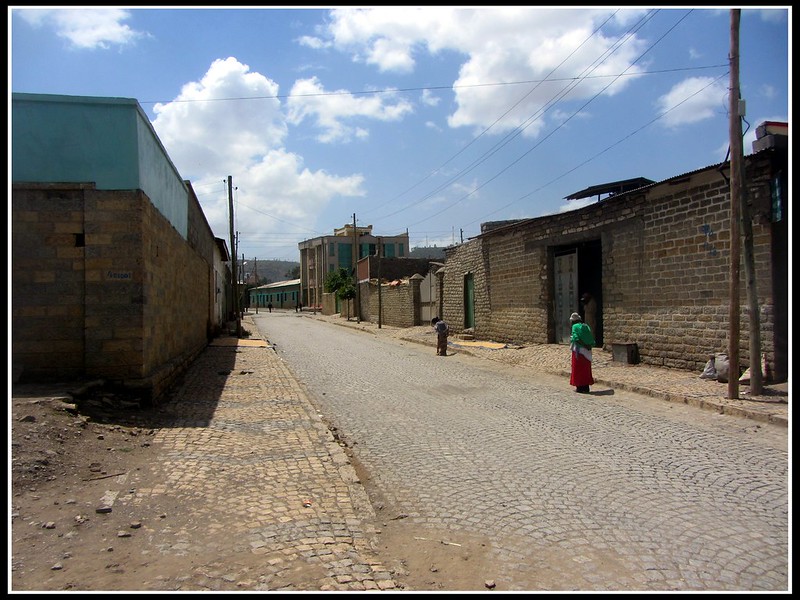 We had more shenanigans than usual trying to decide on a hotel.
Daniel first took us to the Axum Hotel where I'd stayed before, we went straight to the "new building," which I'd stayed in before, but, despite recent renovations, it looked if anything dingier than I remembered. We weren't feeling terribly impressed so we asked Daniel to take us to this new hotel he'd recommended called "the Planet."
The Planet turned out to be a a new ten story hotel tower, modern to the point of having no personality. It lost a lot of points with me for having a metal detector and x-ray machine at the entrance one has to go through every time one enters or leaves, god I hate those things. Also, despite being in an area I guess the city planners are trying to develop (its across from a huge empty lot where a stadium is to be built), it was about half a mile from the main downtown area, whereas at the Axum Hotel one could walk outside and be in the middle of it. I also noted that Axum had a nice garden one can sit in whereas this one just had concrete.
Doug was itching for something less swanky, so he wanted to check out another hotel he had stayed in in one of his previous visits to town (his wife is from Mek'ele so he'd been in town several times). Daniel obligingly took us down to a hotel right downtown, in an ordinary looking building (that is to say, somewhat shabby). It was full of locals, no computers at the front desk but a big binder to sort out bookings. They showed us dingy room with small hard looking beds. While it wasn't terribly impressive in my opinion, I didn't care much, Doug seemed to like it, and it was $30/night vs the $75 of the Planet.
"Okay," I said, "but they need to either put a seat on the toilet or give us a room that has a toilet seat"
We explained this to the front desk and they seemed not to understand what the problem was but finally it seemed to get through and they gave us a different room's key and the porter showed us up to this other room ... which also had no seat on the toilet. We tried to explain the need to have something to sit on on the toilet to the porter and two maids that were there but they seemed to genuinely not understand. So we threw up our hands and thew in our lot with the Planet Hotel. 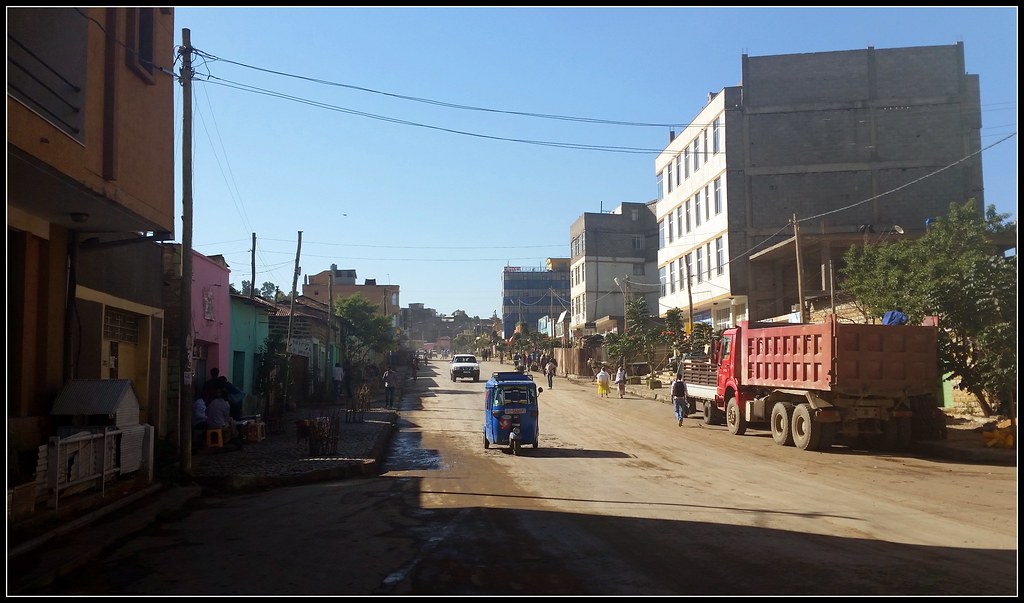 Hotel finally sorted out we visited the Comel office downtown and then went for lunch at a nice little place called "Beefman" right downtown, run by a friend of Daniel's who had spent time in the US. it was a nice chic looking place with tables in am open air courtyard and modern art on the walls. it wouldn't be out of place in the cool part of town in the US, except our table had a wobble they couldn't fix. Felt like a break from Ethiopian food, so I had the curry pasta, because who's ever seen curry pasta on a menu before? I mean it makes perfect sense, why not, but I've never seen it before. Despite Italy's failure to colonize Ethiopia there is a noticeable availability of pasta in the country. And piazzas in the center of cities.

Daniel informed us that this weekend he was driving with his family to Axum for some kind of holiday/festival and that we were welcome to come. I couldn't believe our luck! Do I want to go on a roadtrip across the Ethiopian countryside with a local family to a traditional local event?? Does the Pope shit in the woods?? Count me in!!!


This day was Thanksgiving back home in the States, which I feel obligated to observe in some form or another. In the cane fields of Australia I had gone to the one "nice" restaurant in town and ordered chicken parmesano because it was the closet thing to turkey, and followed it with a tot of Wild Turkey whiskey. I'd forgotten to look for chicken on the menu at dinner, but I decided to at least continue the Wild Turkey tradition and went down to the hotel bar before bed. They didn't even have wild turkey so I really stretched the interpretation of Thanksgiving tradition and drank Jack Daniels alone in a hotel bar while contemplating on the significance of Thanksgiving.