Last Time on Emo-Snal! -- I'm sure you've forgotten by now but I'd just embarked on a roadtrip in Ethiopia with the family of a friend!

Saturday, November 29th, Adwa - Woke up to the sound of construction. I don't remember if it was power tools or just people hitting things with sledge hammers, but it was within the small building of the hotel, and it was loud. the entire second floor was still under construction. I tried to ignore it for awhile. I had no idea what time it was because the one plug I'd been able to plug my phone into was at the other end of the room. The one window om the room was semi-opaque and looked out into the hallway so the light coming in was indeterminate. After lying there trying to ignore the construction noises for awhile I emerged thinking I was probably late to arise. As it turns out I couldn't find anyone from our group about. So I poked around the premises, went to the second floor which was under construction and boring, then stepped over a really feeble barrier to ascend the stairs to the third floor, which presently served as a roof.

While I was up there I saw various members of the Gebremeskel family come walking up from somewhere and hailed them, they were cheerfully like "Wtf why are you on the roof?" and Daniel came up to survey the view with me. His son (ten-ish, recall) would have come too but Daniel forbade him, as it was manifestly unsafe.

Soon we were all up and ready for breakfast, so we all piled back into the van and drove across town (again, not a great distance), to a hotel where we were going to have breakfast ... but it turned out they didn't have any eggs, which would have been a problem for the several of us who wanted omelettes (Injera based Ethiopian food is very interesting but I like to start the day with something that's not going to baffle my stomach). So we walked a short way across a bridge to another eatery which was better stocked. It was a nice sunny day, as usual the streets were broad and had nearly no automobile traffic. Mostly pedestrians were out, with the occasional horse-drawn cart. In fact, conveniently, this is when and where the above picture was taken. As well as this picture of the Gebremeskel family from last entry, which I'm sure you completely have forgotten about ;)

We had our breakfast and then visited a grandmotherly character -- I think Daniel's wife's mom? I really shouldn't be three months behind writing this, or take more detailed notes hey? She also lived in Adwa, down a narrow street. She was very excited to see the family because the visit was a surprise. Her place was reached through a little wooden door in a wall leading to a narrow sort of courtyard, which had some other doors leading off it but one of them led to her living-room / bed-room. There was a stone bench against one wall on which most of us sat. I noted that the ceiling was strangely high. Various things were hung on the walls as decorations, and there was a tv in one corner.
After spending an hour or two visiting there, during which coffee was made (the traditional way, of course, ground and roasted on the spot) and consumed, it was time to visit more relatives. We all proceeded to the house of another Gebremeskel aunt or uncle, whereupon we were fed all over again. This consisted of a few one room buildings in a small pleasant enclosure, which also included a nice area under a thatched awning where people could sit outside, an old fashioned water pump, and the sort of large haystack which is a must for any village life scene in a medieval movie. Nod clambered up on this haystack and was told to get down by his dad. The kids enjoyed frolicking with their cousins, as kids do. Presently Doug taught the kids how to play a game kind of like hacky-sack out in the road outside the enclosure (don't worry, there was absolutely zero vehicle traffic, it was more like a broad dirt walkway). Soon other neighboring children joined in.
Doug and I went walking with Daniel to the local market to see what the honey prices and availability was. The market looked like a desperately impoverished swap meet -- where people couldn't afford tables or canopies and set their wares up on mats on the ground with no shelter from the sun. There were warehouse buildings which seemed to have been set up for the market, and I guess looking at the pictures their doors were open but they looked dark and uninviting and certainly didn't look busy. We asked a few shopkeepers (in actual shops along the edges) who told us there was very little honey this season and they had none before we found a guy that had some. He didn't want to sell us a small amount though, insisting on either selling us a whole three gallon pale of it or not, which we had no use for that much honey and couldn't reach an agreement. 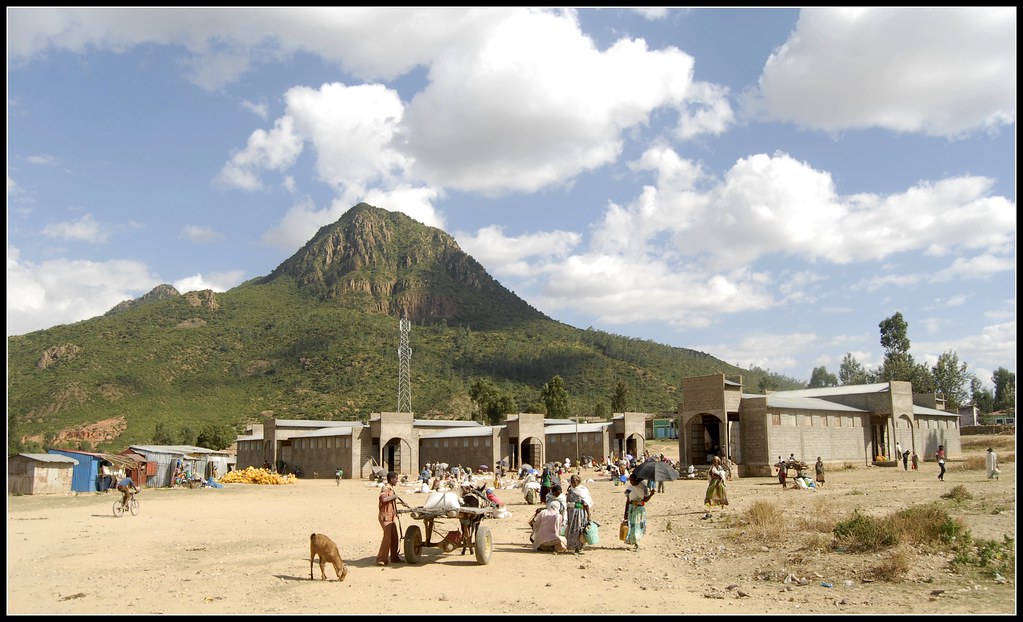 Onward to Axum!
Finally we all set off in the van for our final destination, Axum! As I'm sure you recall, Axum was to be the site of an important religious festival the following day. It's twenty kilometers from Adwa to Axum and all along we passed pilgrims who were making the journey by foot. It's a bit long for a day's jaunt, esp for the many people who seemed elderly or slightly infirm, but at least it was pleasant, through gently rolling hills with green fields on either side.

We found Axum itself choked with throngs of white-clad pilgrims. We were able to find a place to park on a sidestreet and joined the throngs. The pilgrims traditionally wrap themselves in a white cloak and the throngs were nearly all thus garbed. We got on a main street that led straight to the church of St Marie, and there must have been thousands of pilgrims! There were also ancient standing stones -- stelae -- on the hillside just off the road, thousands of years old, belonging to former empires. The "Queen of Sheba" of the bible was Ethiopian, Sheba being an empire spanning Ethiopia and Yemen. Any Ethiopian can tell you that Makeda, the Queen of Sheba, tricked King Solomon and took the Ark of the Covenant from him (leaving him a replica whereas he was going to give her a replica), and said Ark has remained in Axum ever since. In the mean time Axum was the centre of an Axumite Emptire of it's own from 100-940 AD (using the Ark to turn people into screaming ghosts??). Now the Ark resides in a special chapel next to the Church of St Marie in an enclosure into which no one is allowed admittance except for one monk who guards it and never ever ever leaves. When said monk is about to die he chooses a successor to continue his lonely vigil.
Soo I didn't see the ark, but I was THIS close guys!
Also located near the church are the three giant stelae and many very big ones: 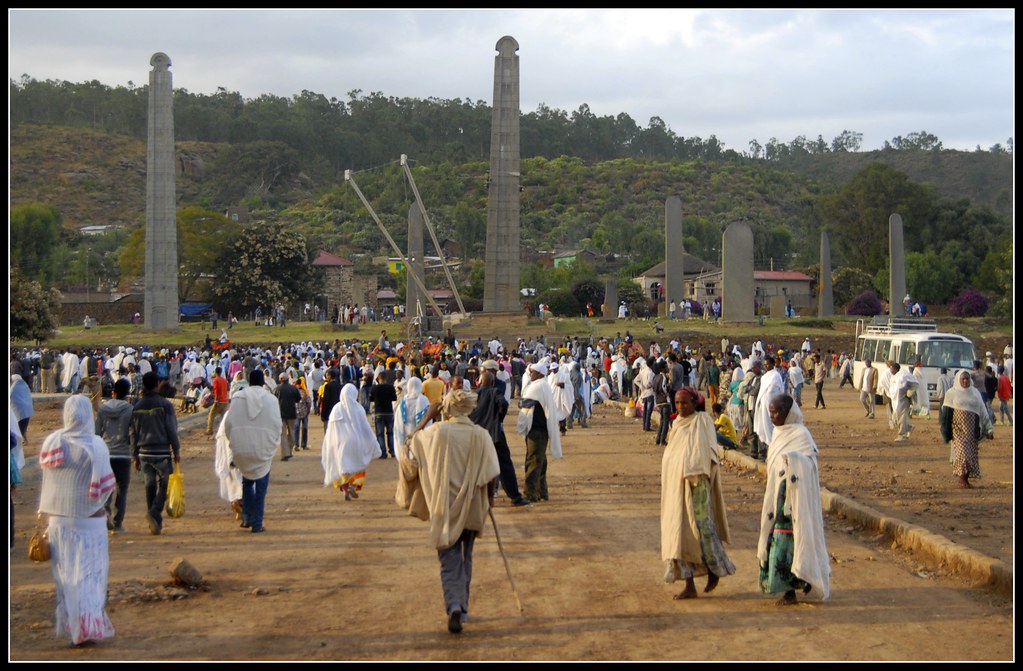 We walked around the church enclosure, which was already pretty crowded with pilgrims circumambulating it, but we made a circumabulation ourselves and headed back to the car. The ceremony itself was set to start at 3am that night. The sun was just setting as we headed back to the car. Daniel informed us that some people stay up all night, even staying out drinking (which seemed strangely sacrilegious to me but hey), and that would be kind of a giant party in town tonight, asking me (jokingly, I think?) if I wanted to stay in town but I declined.
We returned to Adwa and had dinner at yet another restaurant. This one was cozy, and neither still-under-contruction nor the sort of sterile-elegance the place we'd had dinner the night before was. Despite having to get up extremely early we still took our time, the adults sitting around talking and having a few beers, while the kids darted about in the dark just outside. When we finally headed to the hotel for the night we headed not to the uncompleted one we'd spent the previous night in but the nice one we'd had dinner at the night before. I think we got to bed around midnight, in time to get about three hours of sleep. 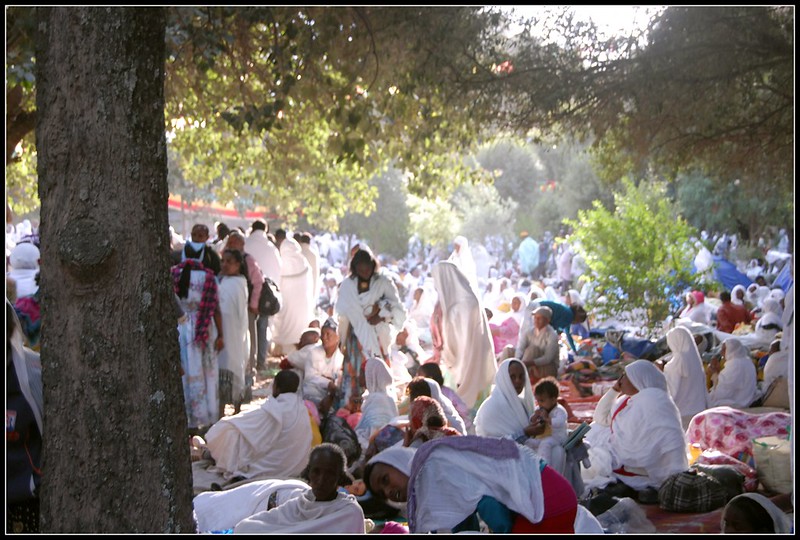 Pilgrims in the church yard, already staked out for hte next morning's ceremony.

Next Episode: The Festival of St Marie!