Okay, since this this has been shared on my facebook wall at least twenty times, including three times in the last 24 hours or so, I'm just going to write one thorough post about it to point to in the future.

The above is the "Flow Hive," a hive design patented in 1947 which didn't take off then but some Aussies are having another go at it with better plastic parts than were available then, and have raised a preposterous $9.8 million on crowdfunding site indiegogo, setting all sorts of records.


Is / Will this product be successful?
Yes it has made it's inventors preposterously rich. That's the idea, right?


Should I get this product
No


Will this product be good for beekeeping
I believe it will have a negative effect on the health of bees.


What it does:
Instead of manually removing whole frames of honey (after driving the bees off with either a fume board here in the US, or sweeping them off with a bee brush of blowing them off with a leaf blower in jolly old chemical free Australia), the hive owner can turn a sort of key that will make the honey flow out of the frames and out a tap without removing them from the hive.


What it doesn't do (but people seem to think it does)
It doesn't eliminate the need to open the hive approximately 26 other times throughout the year (ie once every two weeks or so) to make an inspection. Inspections are necessary to control diseases and make sure the bees are healthy (and do any of a number of things if they're not). Consider that bees in the wild have a 60% chance of not surviving the winter. I've heard countless flow hive enthusiasts chortle gleefully about how this makes beekeeping "so much easier!" and they won't have to open up the beehive at all. This is not true.

Also in the promo video they make traditional honey frame removal look way more tedious than it is and make a point that "bees get crushed." Let me tell you, what do you think would happen to any bees that happened to be in the cells of that flow hive frame when the key is turned. Yep. Crushed. Sure you can see the end of it through that fancy port-hole, that's not gonna tell you much about what's going on in the middle. 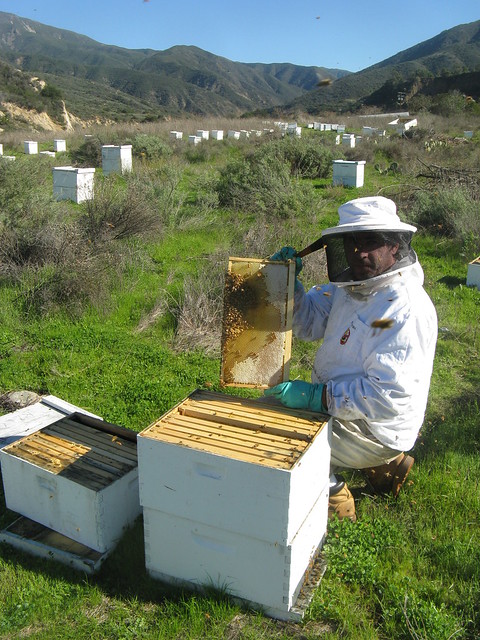 Now see this picture, if you looked at just the right side of that frame you might thing it was full. You'd be very wrong.


A Product Not Quite Right For Anyone
The promo video sure does make it look fantastic, but for whom?
Hobbyist beekeepers usually have more than enough time to take the frames out, carefully brushing off the bees with a bees brush, and this activity is often the most rewarding activity of their beekeeping year and an important moment of beekeeper-bee connection. So I really wouldn't recommend they grossly overpay for a hive that touts they'll have to do less of a hobby they presumably got into because they wanted to work with bees.
Commercial beekeepers probably could use a way to magically tap all their hives with less work. If you could flip a switch and start draining 1,000 hives that would be a glorious thing... but at $300 for a box that would normally be about $60, it's far far far too expensive to be anywhere near a cost effective option. 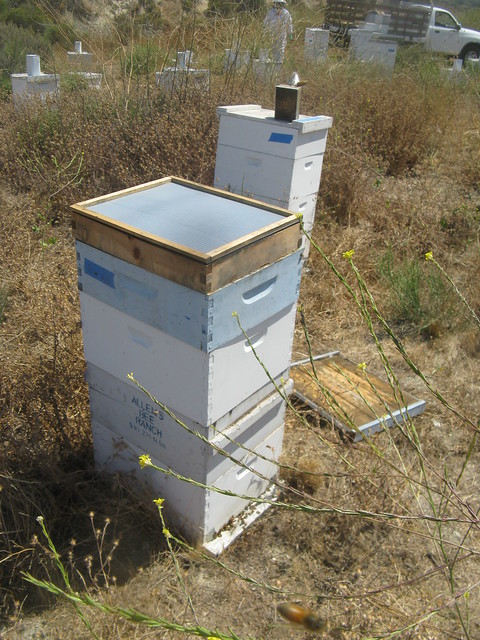 Traditional honey harvesting: place fume board (board with butyric acid on it, an organic material that while it smells so awful the bees evacuate the upper boxes containing the honey, it quickly dissipates with no effect on the honey or the bees), wait about 15 minutes (during which you generally just keep busy putting fume boards on other hives or removing earlier honey supers), and then you remove the entire honey super (box). It's really not a big deal.


Why It's Bad For Bees: A Generation of Bee Havers
As I mentioned above, a lot of the people interested in getting a Flow Hive appear to be people brand new to beekeeping who are enticed by how "easy" it makes beekeeping seem (I also answer the phone for the Orange County Beekeepers Association so I get a lot of calls about it). I absolutely applaud people wanting to get into beekeeping and I'm sure some of these people will go on to be successful and responsible beekeepers. BUT I strongly suspect many will get a flow hive, dump bees in it, and expect to have to do nothing other than turn the tap whenever they fancy some honey. These unmaintained hives will be more than honey taps, they'll be varroa mite taps, nosema taps (a bee gut bacteria), and ::shudder:: foulbrood taps (an extremely destructive and contagious bee disease). They'll have unmanageable africanized bees in their hive and not care because they never work them, until one day the bees work their neighbor, and the city bans beekeeping.
Inexperienced bee-havers turning their honey taps willy nilly will also harvest "unripe honey." Bees put nectar in their cells and gradually turn it into honey by evaporating water and the working of enzymes they put into it. When the conversion process is complete they put a wax cap over the cell and beekeepers only harvest capped honey. Even looking in the Fancy Portal on the side of the hive you can't tell what condition cells are on the other side of the frame. So people are going to turn their tap and get nectar and cells full of water and the aforementioned crushed bees that were in the cells at the time, and that stuff isn't going to taste quite right, and, worse, can go bad (whereas honey cannot). Would you think it was a bright idea to put a tap in a wine barrel and take from it randomly before it was done fermenting? Hey maybe I should market the revolutionary Flow Barrel! 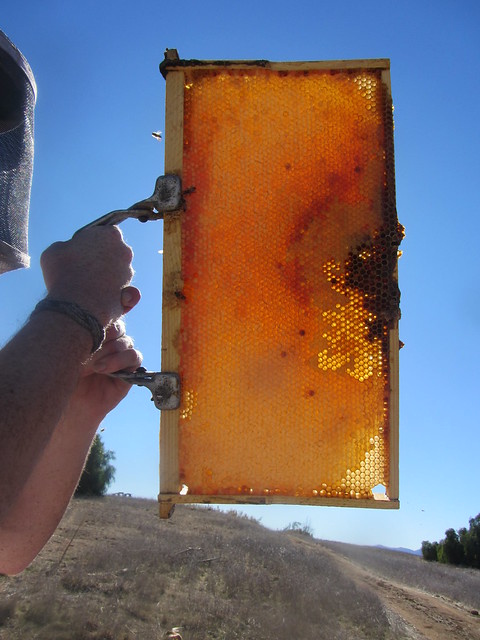 Pictured: frame full of honey being held up to the light

I do admire the spirit of innovation of the (re)inventors, and all the interest it has generated in hobbyist beekeeping. While as you may have gathered I don't think it's a practical product, I don't think the people behind it set out to scam anyone or anything nefarious like that. It's not quite as practical as their promotional materials make it out to be and a lot of people are getting the wrong impression about how revolutionary it may or may not be. I'm concerned I'm soon going to have to deal with a generation of "bee havers." Anyway, that's my two cents for anyone asking my opinion on the subject!