Continuing this story after much delay... 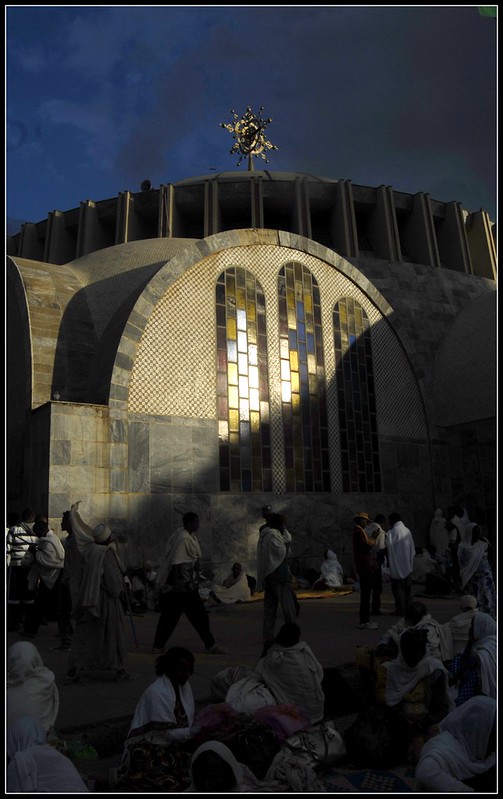 Sunday, November 30th - Woke up at 3am in a bare white-walled hotel room in the small town of Adwa, Ethiopia. I'd been vaguely aware of the sound of people awake outside "all night" (ie the three hours since I'd gone to bed). Which might imply I slept badly or didn't sleep, but I have the unique superpower to hear things at night and be momentarily awoken, without my sleep being disturbed.
After about twenty minutes we were all up, Doug and I and the Gebremeskal family, and we piled into the family van to drive the short distance to Axum. Although it was the middle of the night there were indeed people milling about and on the road walking to Axum (twenty kilometers). Predictably the crowds got more numerous the closer we got to Axum, until we arrived in that town, where it appeared everyone was awake. We found parking surprisingly easily on a side street (see also, few automobiles in Ethiopia) and walked down the main road towards the church and giant stelae. As mentioned previously, Axum is the site of the chapel containing the Ark of the Covenant ... and I'd been falsely informed that they trot it out once a year at this festival, so I was eagerly looking forward to accomplishing one of my life goals (finding the Holy Grail is of course another). 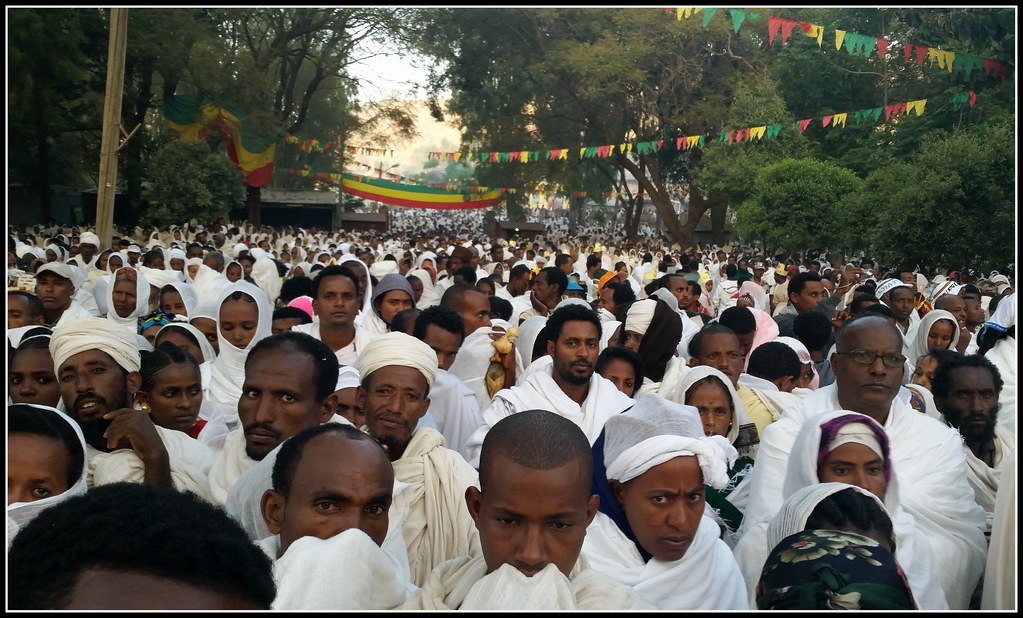 We managed to squeeze in with the crowd into the enclosure around the church. Since there was a thick current of people making a slow circumambulation of the church it was possible to get in the crowd and flow with it. Just about any person who could speak English took the opportunity to warn Doug and I against pick pockets in this crowd in which one was constantly getting pressed against by other people. I had my hands in my pockets but couldn't protect my jacket pockets, though they had nothing of value in them. Still I kind of expected the papers that were in them to be pickpocketed and when I finally escaped from the crush around this church containing the Ark of the Covenant completely unscathed I regarded it as clear proof I am the pure of heart ... notwithstanding what anyone may say to the contrary :D
Doug caught someone trying to reach their hand right into his pocket. Grabbed the hand and looked the guy straight in the eye. Then let him go. We both wondered how is it that people can enter the church compound, presumably with the intention to take part in the holy ceremonies, and then try to commit such a crime right there within the church.
Anyway keep it mind it was still about 4am when we were here in this crowd. Some priests at a table were selling traditional long beeswax candles, made by dipping a strand of wool over and over again in wax. Many people were holding these lit candles, creating a starry array of candle lights in the dark around the church.

After we got some candles we found a place to edge out of the current of moving people for awhile. It didn't seem like much was happening other than waiting for something. Daniel told Doug and I to go ahead and go forward, and if we got separated to meet at the car at 10am. So we stepped back into the current, let it carry us forward, but the crush got greater up there, there was even a moment or two where I thought about those news stories abotu "100 people crushed at religious pilgrimage in India" and was slightly concerned for my safety. Doug and I decided to jump streams into the outbound current. By now we could see the church steps (one doesn't generally go in an Ethiopian Orthodox church, it all takes place around it), and it appeared people were ceremoniously throwing leaves around or sometihng. There were these leaves they'd throw on the ground which when trod upon made a pleasant smell.

Once the current swept us out of the church compound suddenly there was much more elbow room, it was still what one would call crowded (and still pre-dawn), but you no longer had people pressed against you from all sides. Doug and I made our way down to the giant stelae and set next to the ancient stone wall there for awhile crowd watching:

I kind of wish I hadn't cut out the video right there, that young fellow actually spoke pretty good english and we had an interesting little conversation with him.
We saw a few other ferringi -- white people -- about, usually huddled together in a group following closely behind their guide and darting furtive glances about like they were surrounded by wild animals.

Finally we noticed the crowd seemed to be gravitating towards the area in front of the stelae again so we went that way and tried to get a peek at the center of the crowd. I couldn't see much myself so I held up my camera and took a picture over everyone's heads to see what was going on and discovered two lines of yellow-clad priests with canes doing a kind of dance where the two lines danced towards eachother and back again:

I was really excited that any minute now they were going to break out the Ark, but then they finished that dance and proceeded in a sort of parade away past the church.

It was only a short while later that it was time to meet back up with the Gebremeskel family down by where the car had parked. We met them there, had breakfast at a cafe, and then we all proceeded back to Adwa. Back in Adwa there was another round of family visits including lunch again, which once again I tried to insist I was far too full but they stuffed me anyway.
Roadtrip from there back to Mek'ele was nice, with many gorgeous views of the Ethiopian landscape, including a sort of mini grand canyon we went up the side of. Watched the sun set from a mountain pass, and the rest was through the dark of night on in to Mek'ele. (:

( All Pictures From This Day )