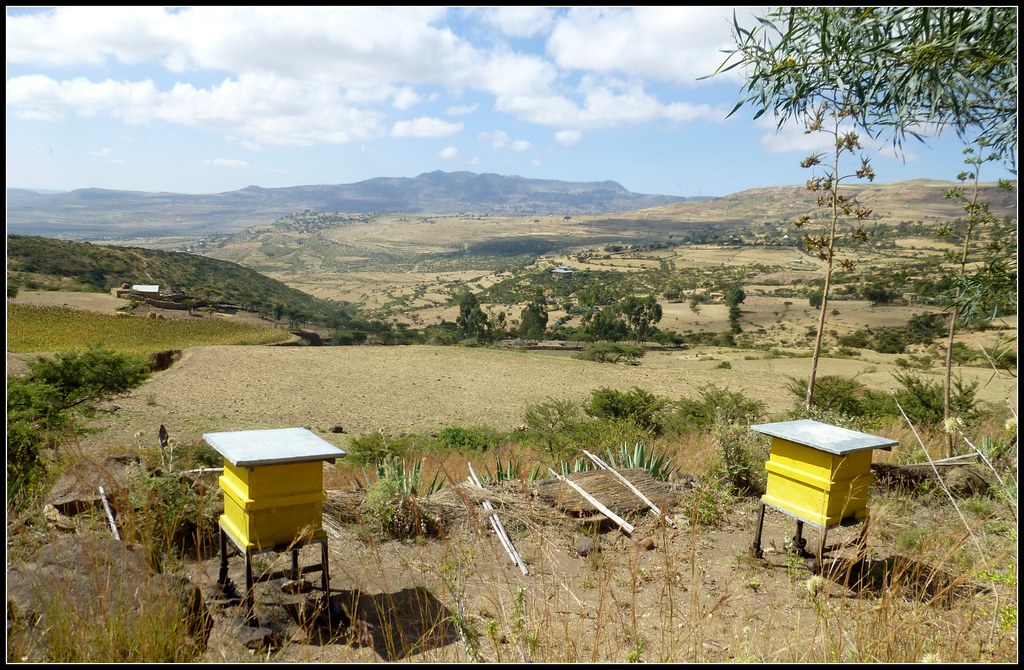 OH I forgot one more iteration in the hotel shenanigans:

Sunday, November 30th - Returning from the roadtrip we actually checked into another hotel we hadn't tried yet. I thought it was perfectly fine but Doug walked into his room and thought he smelled bug spray and vetoed the place. We stayed there that night but he couldn't wait to get out the next morning. So by now we'd visited four hotels in town and I don't think we'd even spent that many nights there.

Tuesday, December 2nd (2014) - Finally, FINALLY, we got to visit some beehives. On these travels often our hosts are recommending all these fun and interesting things we could do, and visiting rock churches you have to climb a rope to get to does sound absolutely fascinating, but I'm always just itching to get on with inspecting some beehives. I would like to see these rock churches some time though. Guess I'll have to go back ;)

Doug and I started the morning walking the short two blocks from our hotel to the Comel HQ office building, where we got in the blue Comel van and the driver drove us to the bee yard which was about an hour down the road we had taken on our way to Axum ... so we curved out of town past the giant concrete factory and up out of the valley and over hill and vale till we got to the apiary site off a dirt road a short way off the main road, on a steep slope. Upon arrival we found the van to be overheating, I think we determined the pump wasn't working properly or some such. Thus you can see the hood up in the background of the picture of this fellow that happened by at that point: 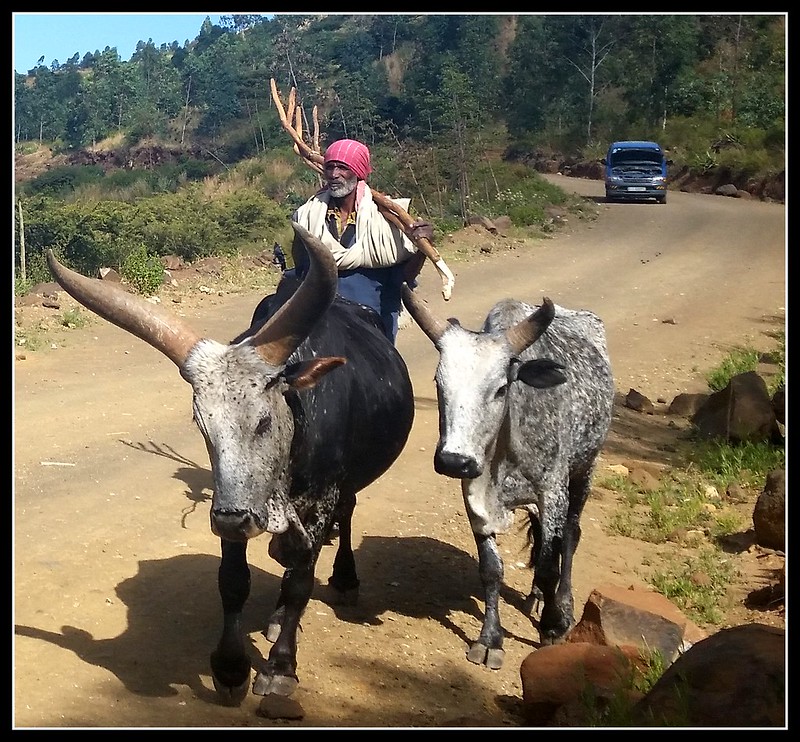 Danial has about maybe fifty hives on this hillside, and a beekeeper and security guy (who looked pretty nice and non threatening) who both also live on site in tiny little shacks. Can you imagine it being cost effective to have two full time staffmembers living on your 50 hive apiary?! I worry if it's cost effective to spend six minutes per hive every two weeks of my own time! 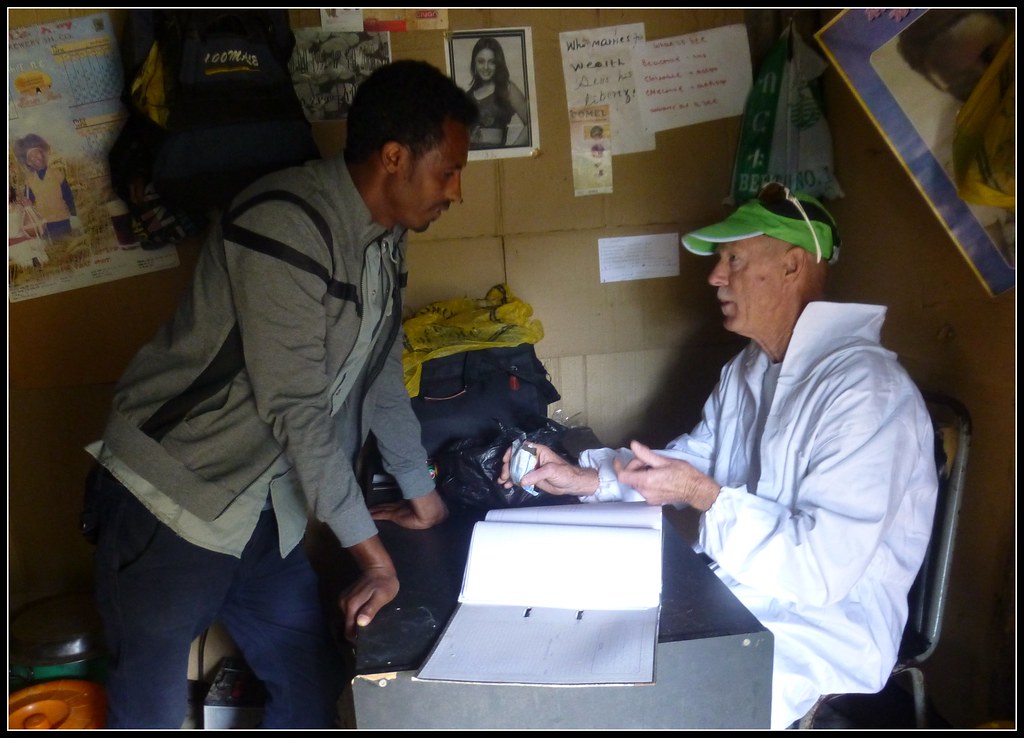 Pictured above, Doug is sitting at the beekeeper's desk and looking through his notes. They're pretty comprehensive! And he kept telling us he needed more training but he seemed to have a pretty thorough knowledge of all the basics.

After that we suited up to look in the beehives. Not to imply Doug is anything but a fount of foresight, but I did take note as we were suiting up htat he was wearing low-ankle shoes with thin black socks, ie the protective suit would leave some of his ankles exposed and bees like to sting black. I prefer to wear high ankle combat boots to have a thorough overlap between my bee suit and the boots. Additionally he declined the offered gloves, saying something like "I'm a beekeeper I don't need gloves." I'm not one to go around making religious pronouncements but I thought to myself "that's the sin of pride, right there," and stuffed a pair of gloves in my back pockets. I usually work without gloves but I never don't have them at hand, you've got to be prepared for whatever might happen. In this case, we didn't know these bees. 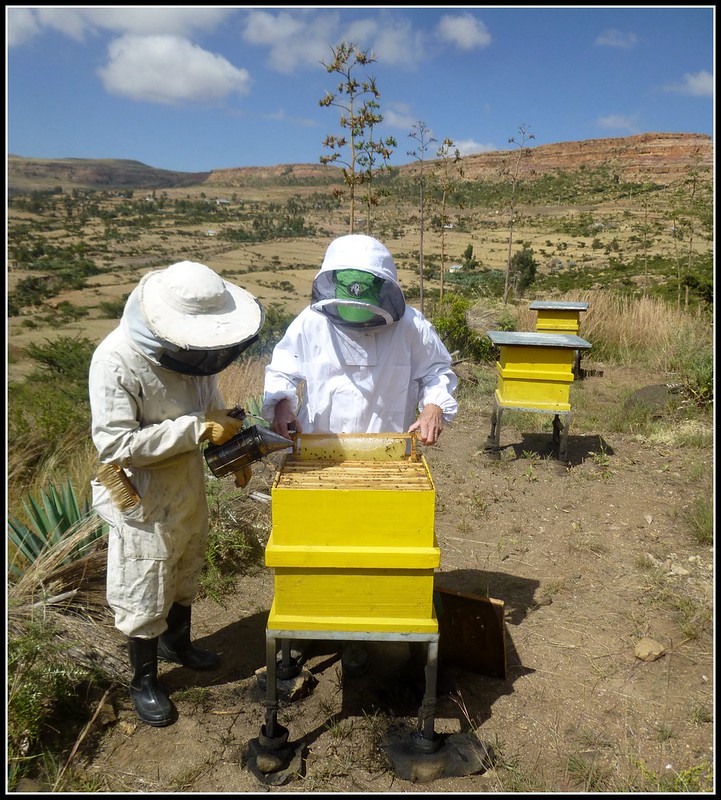 We went through a number of beehives, mostly Doug going through them with the beekeeper while I took pictures. Everything seemed pretty good with them, though they seemed fairly overdue for harvesting. Especially since Daniel had been saying there hadn't been any honey that year I thought it seemed very odd that there were all these hives sitting there with honey to harvest.
I was taking pictures without gloves on, but presently, after we'd gone through maybe 15 hives already, I decided the bees were getting a bit too sting-y and put my gloves on. Doug made it through another hive and then asked me if I wanted to go through one, which I readily agreed to do. While I was doing this Doug was forced to retreat by the stinging bees, and after that we called it a day.
I've noticed that getting stung a lot tends to make people kind of snap-ish and petulant, and I'm blaming that for the fact that then Doug told the beekeeper that _I_ had pulled frames out too roughly and caused the stinging! I found being held up as an example of bad-beekeeping to be rather alarming and embarrassing but I'm not one to argue and already suspected he was just bad tempered from stings so I just sucked it up and didn't say anything. As it is, you'll recall the bees were already stinging so much I had put my gloves on already before I touched the hive, something that I don't do unless bees are stinging me faster than I can take the stingers out. Anyway, I think he may have even apologized later on and said there was nothing wrong with the way I pulled the frames out. 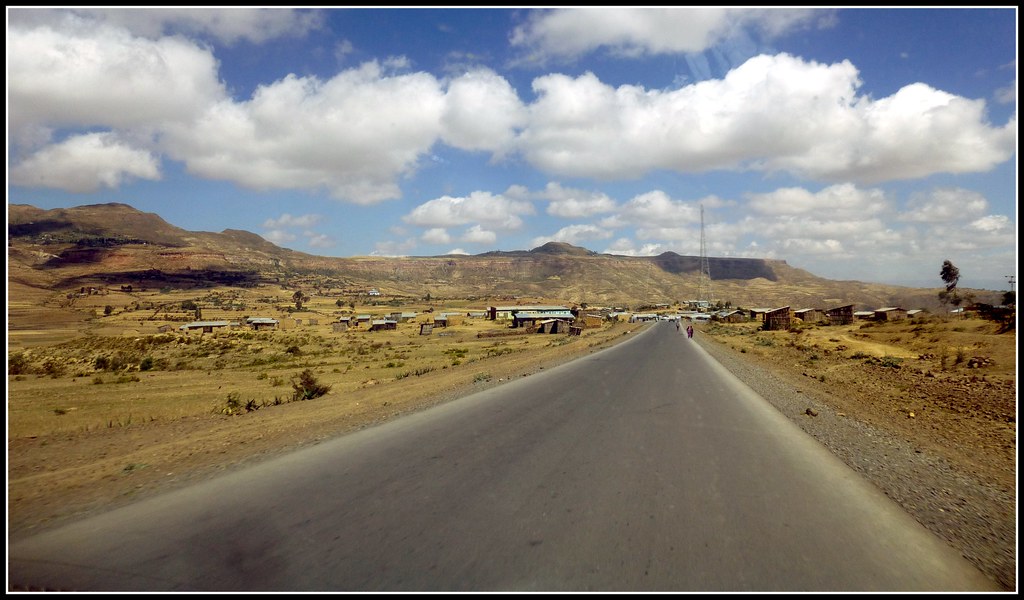 Anyway then we headed back into town. Pictured above, a village we drove through. Doug had received many stings in the ankles so when we got back he just wanted to sleep the rest of the afternoon (I've noticed myself, getting a lot of stings really tires one out), I tried getting wifi at the hotel but it was out. I went to the Beefman restaurant again for lunch and tried to get wifi there but also no luck. Since my phone company has no agreement in Ethiopia my communication with anyone local or international depended on internet based messaging services I tried a cafe that usually had it but no luck there. One doesn't really think of the internet as a flimsy thing but it seems all of the city of Mek'elle has one tenuous connection to the internet, and when it goes out, every internet provider in the whole city is all out at once. I had an afternoon open and my usual partner-in-crime was out, so I tried to get ahold of the girls from the day before. Somehow I got in contact with Dagm during a brief window of internet and she readily agreed to meet but the internet went down before we could work out the details. I was getting frustrated and started walking down the street and really came close to not calling her but decided to actually deal with whatever gouging rates I'd get and make a quick call, and I'm glad I did because it turned out she was waiting for me at my hotel! So we met up and she was with a friend of hers (Ethiopian girls ALWAYS travel in twos), and we wandered around town and looked at the view from the mall building, which was actually a pretty interesting piece of architecture -- sort of four four-story buildings linked by walkways. It's in the middle of the market section of town. From there I took this picture which has several noteworthy things in it: 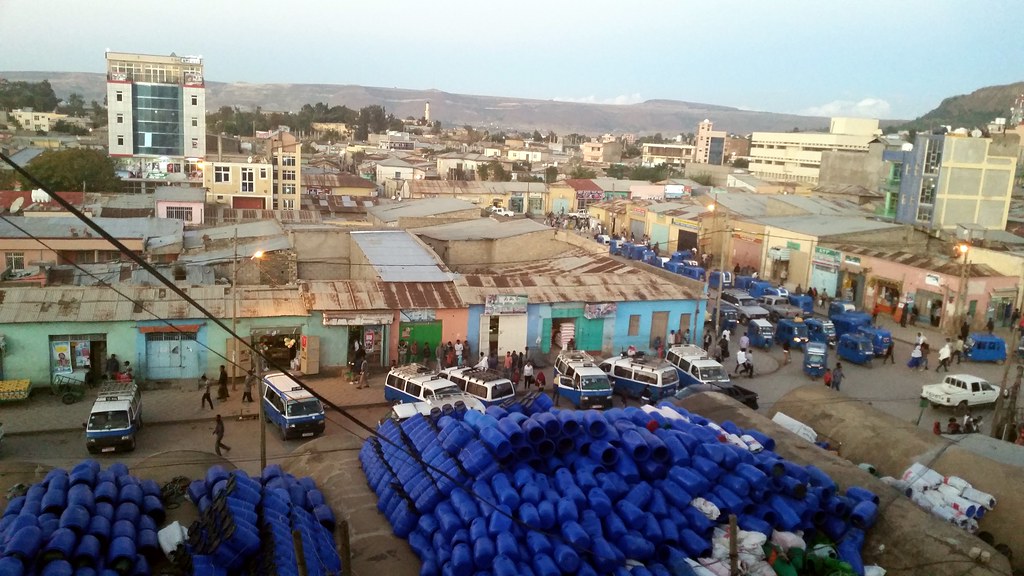 Firstly you can see the curved roofs of the market stall buildings in the bottom of hte picture, you know, just about buried under all those blue barrels that are for sale. Then you see all the blue and white mini-buses which are local fixed-route taxis (as they are in many places in the world I tihnk?) and then in the other street you can see a veritable armada of the three-wheeled bujujes, which serve as more all-over-the-place taxis and are the most numerous vehicles on the road.
Speaking of transportation, if I ever move to Ethiopia (which something I have more than half a mind to do), I really want to get a horse and use it as my actual around-town transportation.

Now this is the point where I realized I needed to go back and insert that bit about the other hotel at the beginning of this entry... because I liked it there, so I took the two girls there for dinner. We all had a nice fancy dinner with wine and the total came out to like $13. Then we all took bujujes home. The end. 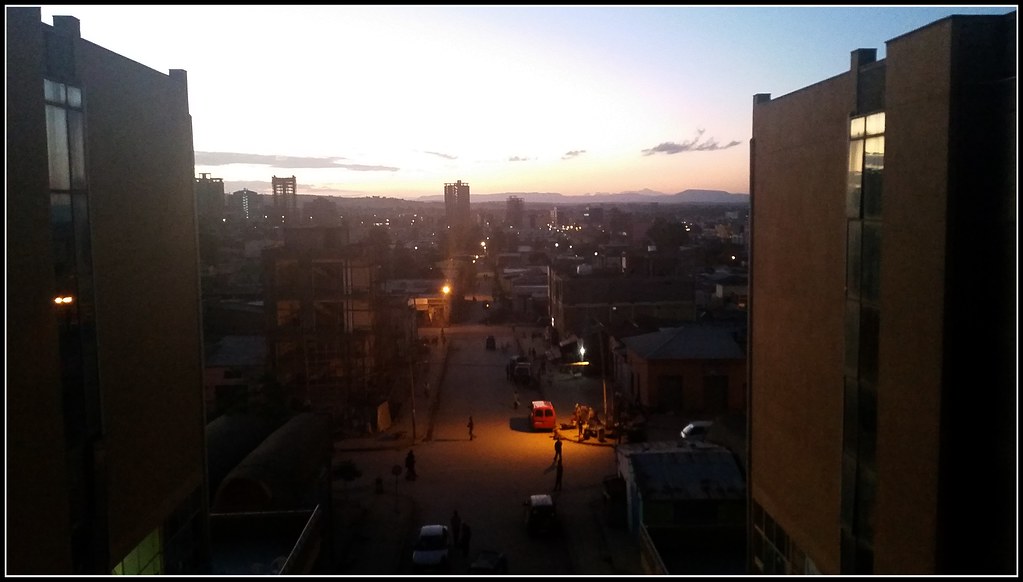 evening from the mall building
See also this picture