About Addis With A Girl Named Addis 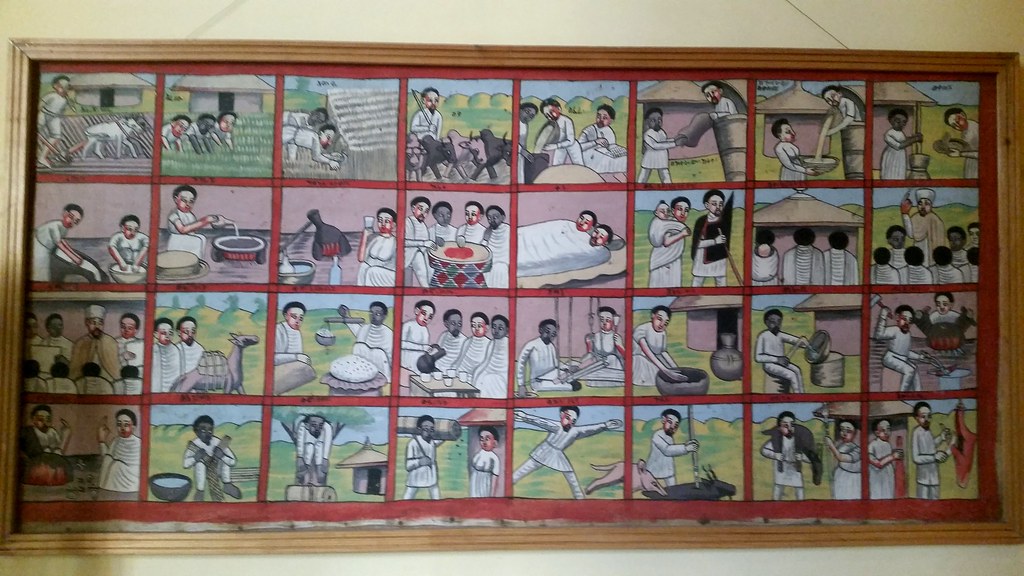 Saturday, December 6th 2014 - My last day in Ethiopia of this trip -- I had a flight to Nairobi in the afternoon (let's say 3pm?). In the mean time I wanted to visit the Ethnological Museum, and it so happened that Addis, (one of) the cute front desk girl(s) at the Dessie hotel had the day off after working the overnight shift and volunteered to go about with me. So around 7am I got up and went down for breakfast just as she was getting off her shift. To avoid getting in trouble for undue fraternization with guests she walked down the street and I caught up with her down there, all secret like. I think it later became a non-secret so I don't think this will get her in trouble. And while I'm on the subject I just gotta say I love the whole staff of the Dessie hotel from the manager to the doorman, they were all so sincerely friendly -- the next day in Nairobi I posted on facebook that I missed the whole staff. So if you're ever in Addis Ababa...

First Addis and I walked around the area for awhile. The African Union (AU) headquarters was near there so we walked over there. I think I wanted to check something online but I didn't have a data plan in Ethiopia so I needed to find wi-fi. And just outside the AU building there were a number of youths on their phones using the AU wifi. Addis asked them what the password was and they told me it was "we are all African!" or something like that. Very fitting for the AU, though I'm not sure I qualified to say the magic password ;D Anyway, so step one, not even 8am and I was hacking into international organization's networks! [note to CIA: "hacked" is a bit hyperbole I just used their wifi to check my email please don't drone strike me! hides under desk for twenty minutes] 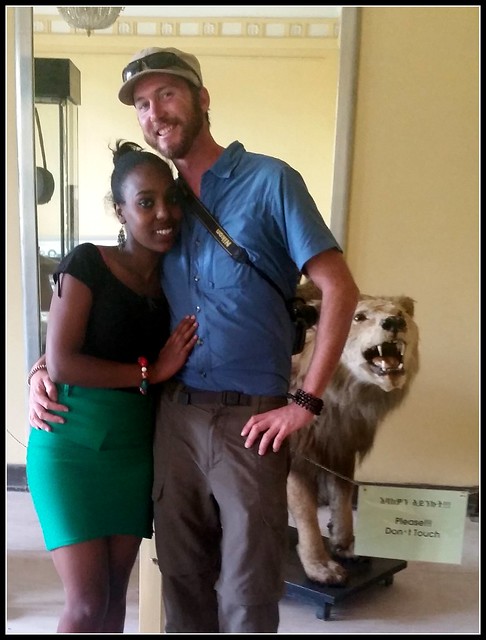 From there we got a taxi to the ethnological museum. The museum is housed in one of Haile Selassie's palaces and is in the middle of the main Addis Ababa University campus, surrounded by beautiful gardens. Reviews online had pretty much unanimously said Ethnological Museum was much better than the National Museum and it didn't disappoint!
There were a great many cultural artifacts and displays with everything from information and artifacts from the monarchy to displays about tribal customs related to marriage and agriculture and everything in between. There was a room dedicated to traditiponal musical instruments, with many examples. And art of course. We were also able to see Haile Selassie's bathroom. Exciting!
Interesting fact, so Haile Selassie was the last emperor of Ethiopia, I think possibly the last actual de fact emperor on Earth (I think Japan has one with no power at all? Haile Salassie was in fact the head of state), and was a fairly enlightened one at that (National Geographic 1965: "[Ethiopia is] nominally a constitutional monarchy; in fact it is a benevolent autocracy."), though there were certainly some gripes about the feudal system. His title of Ras Tafari basically means Duke (Ras) of the house of Tafari, his position before he was Negusa Negast (King of Kings (Negus = king), ie emperor) and gives rise to the "rastafarian" movement because they worship him as a god. Anyway Haile Selassie, Ethiopian history and Ethiopian royal titles (dejazmach = count) are all fascinating so if you want to read more I suggest you just go to his wikipedia page (:
In 1975 the communist regime known as The Derg overthrew the monarchy and Haile Salassie died in prison, officially from medical complications, but his doctor denies there were any medical complications...
Also, I think he looks a great deal like modern comedian and actor Steve Carell: 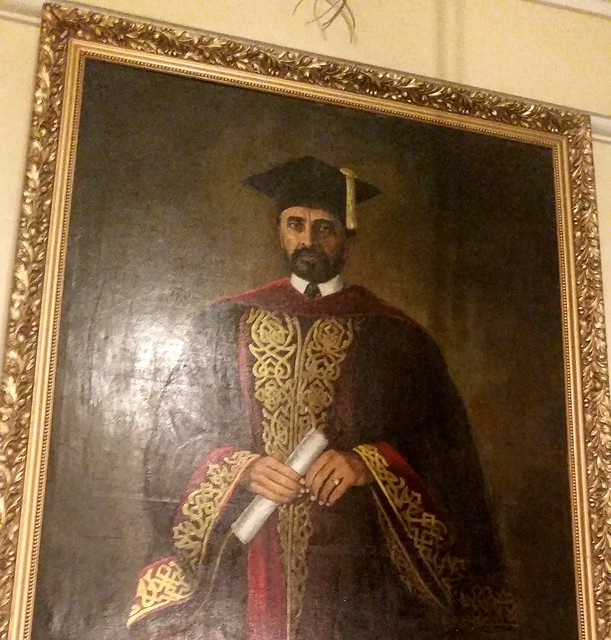 As dressed in his capacity as university president.

Anyway the museum was great as museums go. So in summary, I recommend you (a) visit Ethiopia; (b) stay in the Dessie Hotel; (c) eat at the Jewel of India restaurant in Addis even though yes that's a different country's food; and (d) go to the Ethnological Museum. 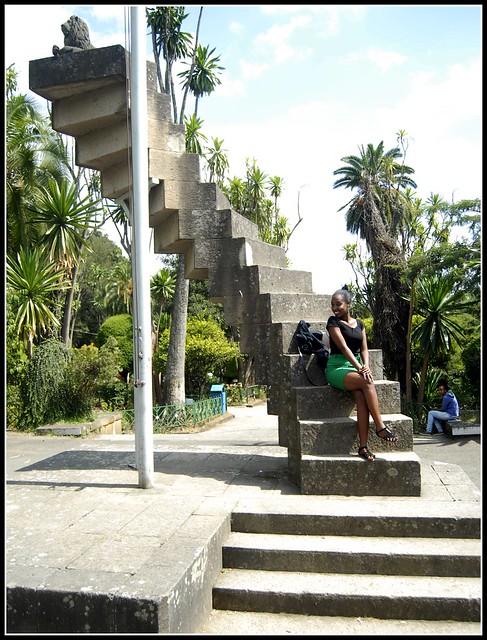 During the Italian occupation of Ethiopia during the 30s the Italians built this staircase with one step for every year of Musolini's power. The Ethiopians then topped it with a triumphant Lion of Judah, a symbol of Ethiopia, to be snarky. (:

From there Addis and I went to a restaurant in another hotel for Italian food, which was very good. And then it was off to the airport!


Nairobi
In Nairobi I discovered that my Kenyan visa had been voided by visiting Ethiopia. There followed several hours of airport hell where I couldn't get through passport control, I couldn't get a new visa because I didn't have money, and the one ATM that was there wasn't working. The passport control officers (sitting in their office with their feet on the desks cavalierly) kept telling me I needed to talk to customer service and the customer service girl (young, attractive, "librarian glasses," sitting at her desk texting) kept telling me no it was the responsibilty of the passport control officers to get me through.
Finally I was able to convince the customer service girl to come with me to the passport control office and argue with them in person, which she did. As a result of that she walked with me through passport control to visit an ATM there, all the while explaining that it's really not her job and that she wasn't trying to inconvenience ME she was just trying to force passport control to do their job.
Finally getting through there I found the driver from the hotel (Kahama, where I'd stayed before, not the best but I couldnt' find anything that looked likely to be better), who had practically given up on me ever coming out.
Checked in to the hotel and a later went out with my friend Grace to a nightclub in Nairobi. This was another fun cultural experience, though it wasn't much different from a nightclub in the states, I'd imagine, but it was kind of novel being the only foreigner in this happening local place late at night.


Sunday, December 7th 2014
Last day in Africa of this 40 day trip! On my first day over a month prior I remember just trying to get my bearings in Nairobi and plan out how to see some major tourist sites. On this last day I woke up trying to figure out how I could manage to see as many of my friends on this last day as possible!
Went to lunch at a pizza place with my friend Wairimu (graduate student specializing in supply chains, which I think is real neat), and then met with my friend Claire at the Thorn Tree Cafe. THE Thorn Tree Cafe. If you happen to be a Lonely Planet type person you'll recognize the name of the Lonely Planet Forums is "the Thorn Tree" -- it's named after this cafe.

And then that evening I caught a flight to Zurich! A few hours layover in the Zurich airport, during which I had occasion to use the compass I'd been carrying around the whole trip for the first time. And I was off back to California!


And here's an outtake: 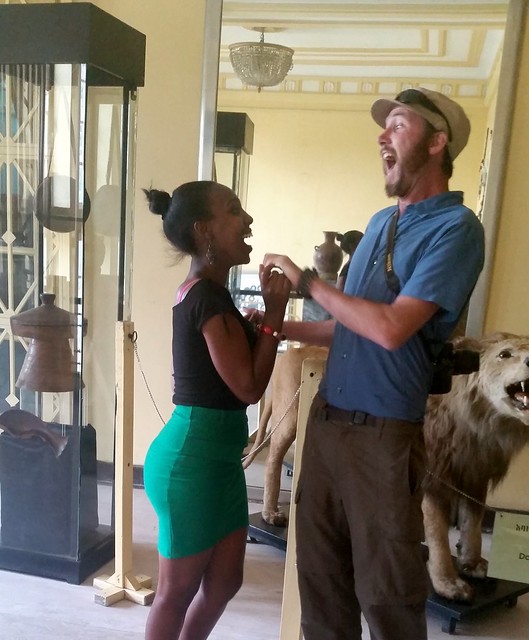 I apologize for the off-center-ness, when someone else takes the picture what can you do