I was rather taken by surprise. I had just walked around the corner from the hostel I'd just checked into in Copenhagen, and a woman dressed fairly nondescriptly in a puffy black jacket had said "excuse me" in a politely insistent manner as if she were about to ask me for directions.
I was at a loss for a second mainly because my immediate reaction to any kind of solicitation I want to have nothing to do with is often to respond "jag prata inte engelska" -- "I don't speak English," but this reaction was immediately tripped up by the simultaneous realization that I was in Denmark and there were pretty good odds she could speak Swedish and/or would be well aware that pretty much anyone who can speak Swedish can speak English. So I was left sort of stammering "uh, no thank you!"

I was on a sort of lightning tour of Europe -- 24 hours in Copenhagen, 24 hours in Amsterdam, about four days near Frankfurt, and about two and a half days in Sweden. The occasion was a good friend's wedding near Frankfurt. I had found a wicked good deal on Norwegian Airlines -- $560 round trip between Los Angeles and Copenhagen!
Norwegian is definitely a budget airline. $60 if you want an in-flight meal! If I'm paying $60 for a meal it better be filet mignon and accompanied by candles and a string quartet! Not something microwaved and plastic-wrapped! So I spent a very hungry flight. The couple next to me had booked themselves food service, which led to some awkwardness because the woman clearly felt bad that I wasn't eating and kept glancing over at me while I studiously tried to look busy reading my book -- trying not to make them feel guilty or worse be given food by them and feel like some kind of freeloading lout.
"You're not hungry?" She finally asked.
"I didn't want to pay $60 for the meal" I said, feeling cheap.
"It was??" she turned to her husband in surprise. Now I felt guilty for making them call into question their purchasing decisions. No end of awkwardness over this situation basically. 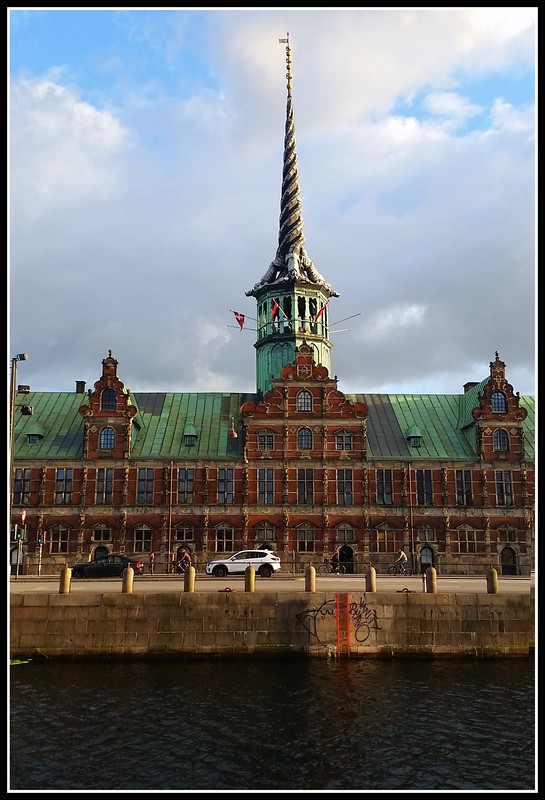 It was very easy to catch the comfortable little train from the airport to the downtown station (about 20 minutes) and then my hostel ($37 a night) was right across from the train station. It was nice, smallish, on the more comfortable side of hostels I've been in (bunks weren't just freestanding but each set in its own nook with walls fore and aft, a solid shelf under the mattress, and a curtain to pull across the open side for privacy. After checking in and leaving my bags there I set out to see the town.
And as mentioned immediately encountered a prostitute. Who didn't even look like a crack-whore. Welcome to Europe! As it was after 5pm I figured the museums would all be closed so just started walking downtown. It was rather brisk, I'm glad I brought my peacoat. I walked through nice cobbled pedestrian-only streets downtown in a canyon of tall old European buildings. I stopped to read the menu on the "Modern American Restaurant!" and a waiter tried to beckon me in, I just laughed merrily.
I found my way to Christiania, an anarchic district of Copenhagen I had heard about where laws aren't enforced. I had always pictured it as a thriving flea-market of things being sold tax-free, maybe illegally copied DVDs, suspension of alcohol and drug laws, and probably where the prostitutes would be (rather than around the corner from my hostel). I was fairly disappointed though, all I found there was a sort of rastifarian village. The walls were covered in colourful graffiti, red, yellow and green flags fluttered by the dozens in the cold wind, images of Bob Marley an Che Guevara woven on hemp tapestries festooned the shops. The smell of marijuana wafted thickly on the air. I didn't see anything other than crude rastifarian knick-knacks for sale. You're given freedom and this is what you do? I continued on my way. 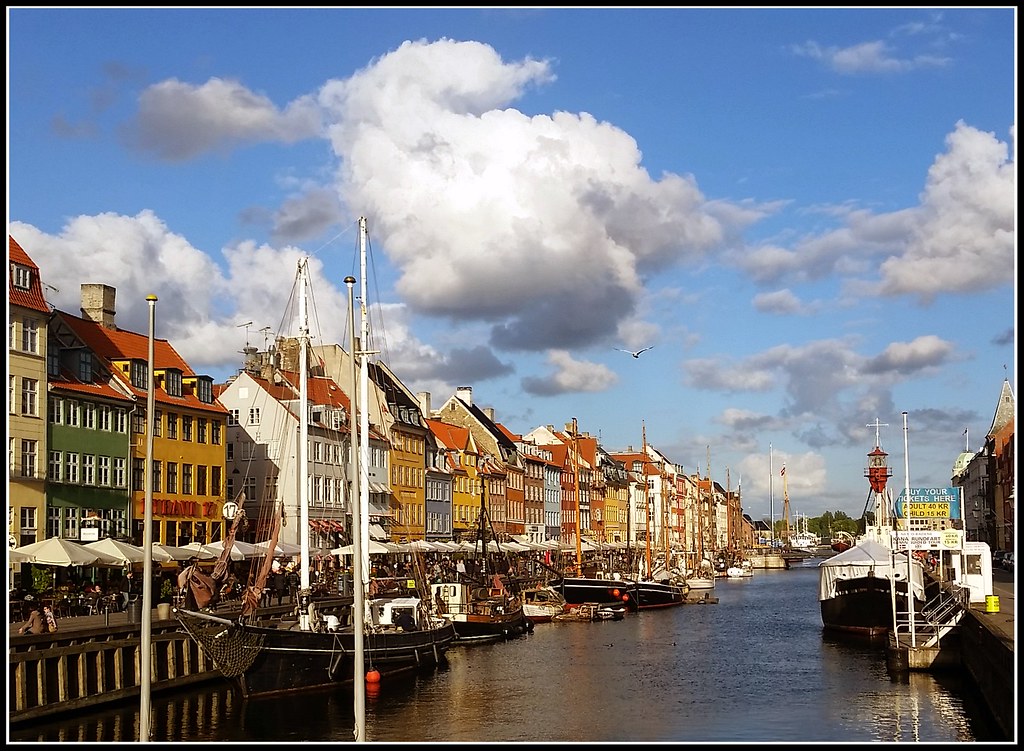 Next I trotted to Nyhavn (new harbour), it had looked cute in some pictures I saw. It was a canal with lots of wooden sailboats moored up all along it's sides, and a continuous row of little restaurant cafes lining the parallel road. I stopped here and had coffee under a heat-lamp.
By now my feet were killing me. For the wedding we were told to wear grey chuck taylors (converse) and yellow socks. Rather than bring multiple pairs of shoes I decided to ONLY bring the chucks I had bought for the occasion. As it turns out converse have a pretty thin flat sole, and doing extensive walking on un-broken-in converse was just a terrible idea.
I returned to the hostel and chatted with other people there most of the evening. One funny thing I learned from an Indian fellow currently attending the university at Lund, Sweden, was that "Lund" apparently means "penis" in his native punjabi, so he was very embarrassed to tell people back home where he went to school... 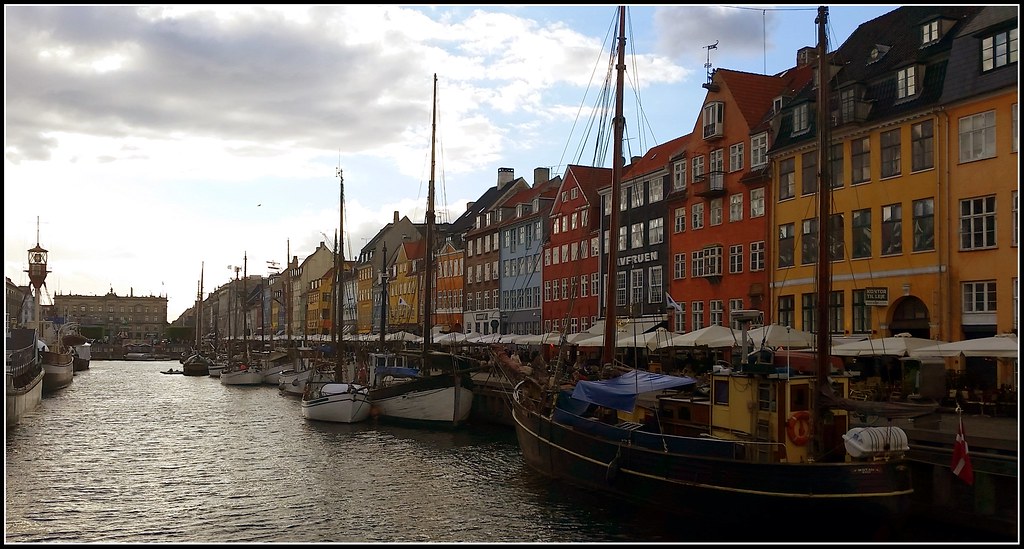 Nyhavn again, I really wish I'd had better lighting.

Wednesday, May 27th - got up as soon as the hostel breakfast became available at 8am. From my experience the "continental breakfast" you get on the actual continent in question (Europe) is incomparably better than the crappy "continental breakfast" you get in the US, which usually consists of a few tiny bran muffins, caustic cheap fake orange juice and nescafe. The hostel had good coffee, freshly baked bread (tasted like it might have been soda bread?), fresh jams and butters and cheeses, ham and salami, and fresh tasting orange juice.
While I was eating it was amusing to watch on facebook as various reports came in from the other attendees of the bachelor party which would be that evening in Amsterdam. Some people were just arriving in Europe, one couple was driving from Paris, the best man apparently was ALREADY having to jump off the train to puke somewhere near Frankfurt. An auspicious beginning! 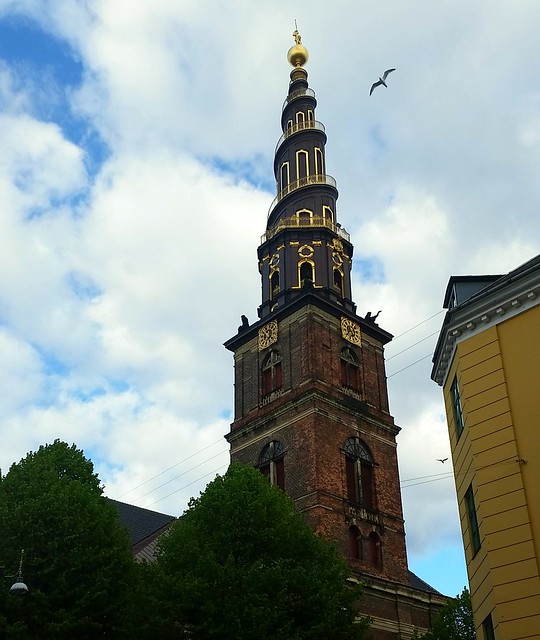 I headed to the National Museum, just a quick walk three blocks toward the center of town. Admission was free and I was engrossed in their exhibits which begin with stone age Denmark, with arrowheads, bones, a dug-out canoe that had been preserved under a bog, etc, and advance through time from there. I probably spent an hour looking at exhibits just progressing from 6000 BC to 1500 BC. This is another reason I like to travel alone, what if my travel companion did NOT feel stone age Denmark was worth hours of their time??
The sea levels rose, and giant elk became extinct, the people turned more towards farming and the exhibits continued on into the bronze age. Swords and tools and daggers, religious emblems of the sun being pulled in a chariot. The burial of a young woman in a beaded skirt, an outfit that looked like something you'd call "unrealistically cute and stylish" if you saw it in a hollywood film.
I learned some interesting things. Early drawings of their ships looked like they had beaked ramming prows like Greek triremes, which you definitely see no indication of in later viking longships. And I'd always been told that the vikings didn't actually wear horned helmets but there staring at me were some bronze helmets that clearly had horns. Obviously not into battle, but apparently for ceremonial purposes at least tehy were an actual thing.
On to the iron age and a very surprising amount of Roman trade goods. You don't really think of "vikings" trading with Romans and valuing ornate Roman crafts but of course it's a thing. Copenhagen means "shopping harbor" and while the earliest evidence of habitation there specifically only got back to circa 1000, Denmark has always been in an ideal position as a center of coastal trade between northern Germany and the western coasts of Europe.
Unfortunately I had only reached the end of the iron age exhibits, circa approximately the end of the Roman era (400ish AD), by the time (noon) I had to leave to go catch my flight (3:30pm). I didn't even get to the actual viking era! Clearly I need to go back! (also my mother (

Once again it was an easy transit back to the airport (Lufthavn - air harbor), and I was off to Amsterdam! And that, of course, is another story. ;) 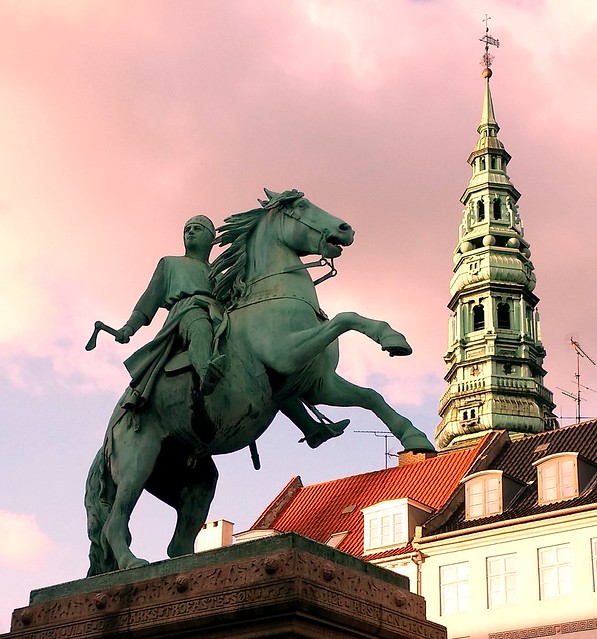