Sunday, August 23rd - The day before the trip I found myself particularly stressed, not so much about packing so much as a number of things that needed to be sorted out before I left. Among other things, I bought my tickets for the October trip to East Africa. The group in Tanzania I've been planning to work with, the main contact has been extremely difficult to get ahold of and when I finally had a friend in Nairobi call him (he always asks me to call him in the afternoon, which is the middle the night for me) he apparently said "call in September" to find out if everything is ready for the project ... which as you can imagine increased my frustration with trying to plan it. But then I got a nice email from the Beekeeping cooperative of Pemba Island, the northernmost of the Zanzibar islands. I had contacted them as a backup plan to Tanzania but they seem so much easier to work with...

I'm thinking of trying to fit both in though.

I took most of the evening off though because my dear friend Asli was passing through LAX with a seven hour layover, on her way to Fiji to take up a position as a third mate on a ship there. It's funny because last time I was her was a little less than a year ago when I myself had a ten hour layover in Istanbul.
It was interesting to note that for her to legally immigrate or even visit the states would be a huge process, but, without even dealing with the US embassy or consulate she was able to get a transit visa on a ticket from Istanbul to Fiji, get stamped for a "transit visa" on arrival and walk right out of the terminal to disappear into Los Angeles.
As it happens of course she has no intention to illegally immigrate and to do so would throw away her huge investment in time and money in her merchant marine licensing (US authorities who are reading this please take note and keep it in mind when granting her a tourist visa eventually!)

We had just time to drive down to the Santa Monica Pier and stroll about there for a bit before rushing back to the airport. Unfortunately didn't have time for In-N-Out as we'd hoped -- the line was around the building. I feel well satisfied though that we made the most of the time, the pier and surroundings were suitably emblematic of the LA area. 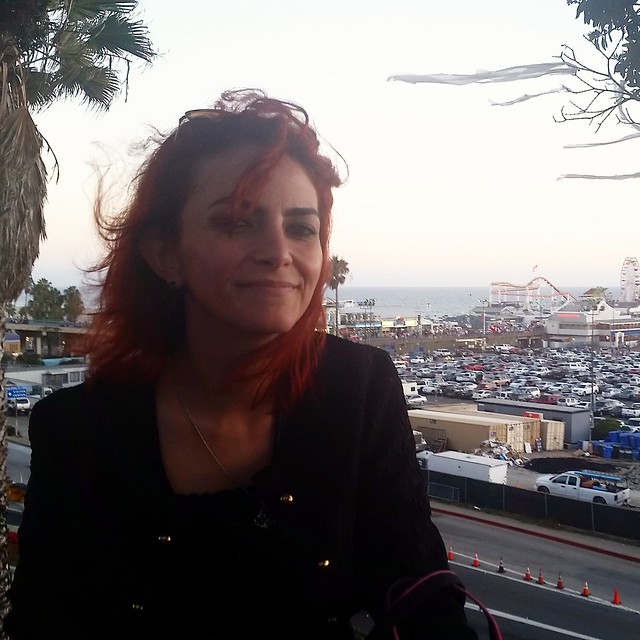 Monday, August 24th - Got up at 5:30 for my 8:45am flight. And then began packing ;D
Last time I was really freaked out because I didn't seem to have forgotten anything, which just seemed wrong. Well I don't have that worry this time. Despite distinctly remembering unplugging my phone charger and picking up the solar phone charger that would have been so useful on this trip, I can't find them in my luggage. Very irritating, I guess I must have set them down somewhere between retrieval and putting them in the luggage. ):
And before anyway says "you wouldn't have forgotten anything if you had packed the day before! I'll point out that I needed my phone to be charging that night so the one tihng I forgot I couldn't have packed earlier anyway.
As it happens I have another charger that's for the in-country phone I've been provided with, but it doesn't seem to charge my phone very fast, charging overnight last night (in country now) didn't even get it about 80%.
Also it means I can't transfer pictures from my phone to my computer. :-/

In Flight Movie Review Intermission!
The Hobbit III: Battle of Five Armies - D+ I loved the Hobbit book, though granted I was in elementary school when I read it, but I'm going to wildly guess there was just a chapter or two dedicated to this battle, and there's a reason for that. While an important event if you dedicate an entire novel / feature-length-film to one battle, we've really gotta care about it and/or it needs to be done extremely well. You could make a movie about Gettysberg or Waterloo or such, but I think almost any entirely fictional battle is just going to be a lot of pointless killing in movie form. And that's what this was, CGI orcs and dwarves and elves throwing eachother around for 2+ hours. On top of this the orc commander suddenly appears on top of another mountain that wasn't there before, and though it's snowy on top everyone seems easily able to teleport there from the battleground and/or see what's going on there? Or how about when characters trekked to some other fortress presumably hundreds of miles away and returned, also during the battle? I'm not talking about the wizards going to renamed Dol Guldor in the south, but that made up place in the West. Anyway, I thought it was pretty terrible, probably the only reason I didn't give it an F was out of my tremendous respect for JRR Tolkien's original story.
The Water Diviner - A and I don't give many As! Russell Crowe as an Australian farmer and water diviner sets off to look for three sons, all of whom failed to return from the Battle of Gallipoli four years prior. Also his wife commmits suicide, which I guess really bummed him out, but obviously opening it up for him to fall in love with a Turkish woman, which I'm not even calling a spoiler because who wouldnt' see that a mile away. Anyway for some reason, despite not having had any relatives involved to my knowledge, the Battle of Gallipoli always seems particularly poignant to me, maybe it's because I lived in Australia, have been to Gallipoli, and fell in love with a Turkish woman myself (and whom I'd seen just the day before). Anyway I think the movie was well done, and did a good job of portraying the Turks of the era as a rich and dignified culture torn between a disintegrating empire and Turkish nationalism.
Gunman - B- A solid running-around-shooting-pepole of the "trying to find out why they're trying to kill me" variety. Noteworthy aspect to comment on, in the beginning the protagonist and his compatriots are working as private security for aid agencies in Congo, and then most of the action occurs eight years later, where we find him digging water wells in the Congo (an interesting random parallel to the Water Diviner, which involves some well digging), and all of his compatriots are now filthy rich running their own aid agencies. I had no idea aid work was the path to the swanky life! ;D


Tuesday, August 25th -Other than those movies, nothing much to remark on about the flights. Orange County -> Minneapolis -> Paris CDG (where they still don't know how to queue for security check, but I got randomly waved into the flight crew line, where I think security was much more laid back and friendly) -> Sierra Leone (didn't de-plane) to Conakry. Arrived in Conakry at 17:30, which if I'm doing the math right is 25.75 hours after my plane had taken off in California. It took another hour and a half to wind through the narrow crowded streets of Conakry to my hotel at the end of the peninsula.


Wednesday, August 26th - For my own reference, this is the Golden Plaza Hotel that they've put me in this time. It has a nice restaurant in it, the food is downright good, and the internet works better than it does at home (that being said, it's been down this last hour, but hey). Generator kicks right on when the power goes out, AC works ... but my room is a cell with no window. There's a window, on the side wall of an adjoining utility closet which I have a curtained window that looks into. So the level of outdoor light and fresh air in here is dungeon status. And the bed takes up most of the space in the room so it's very dungeonesque. I'd ask to be put in the hotel I was in last time, which is right around the corner ... but internet is lifeblood and it mostly works here. When I get back into the city I'm definitely requesting a room with an actual window though. I don't care if it gets street noise, that's preferable to being in the Bastille here.

Speaking of when I return, usually there's a day or two of lollygagging about upon my return to the capitol, which is generally not very fun because, like today, I end up with nothing to do but sit in my cell. But I google image searched the islands off the coast here and ... wow! And then looked at the tripadvisor comments on them and they're totally doable in a day trip! I'm so doing that when I get back!

But back to the present, today I spent way too many hours cooped up in this cell. Oh I went out and walked around a bit, but this town isn't entirely safe even in broad daylight (last time I was year one of the other volunteers got picked up by some soldiers allegedly for photographing buildings he wasn't supposed to photograph, and they took him back to their barracks to pressure him into bribing them. Though ultimately they let him go not terribly worse for the wear, I'm still particularly leery of soldiers in this town. I did find my favorite Turkish place from last time I was hear and had lunch there.

Also exchanged money for 8300 Guinean Franks to the dollar, thus making me once again a millionaire (1.8 million franks to my name at the moment). I always find it novel that the official exchange rate (7300:1) is just an average and you can actually beat it. In industrialized European countries I don't know how one can do that, usually everywhere that'll exchange money will only do so at a rate significantly advantageous to the broker in comparison to the exchange rate, but dealing with individual money exchangers in Africa I've frequently been able to significantly beat the rate (and by me, I mean the savvy Winrock staffmember assisting me). 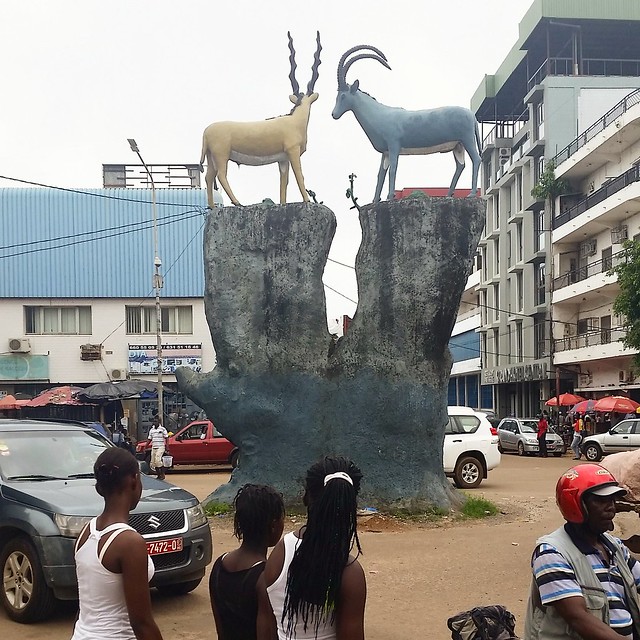 It is presently Wednesday evening. Tomorrow morning I head up country to the project site in the field. Immediately prior to beginning one of these projects it always feels a bit like walking to the front of a big lecture hall with no idea what you're about to say. Getting to the podium, turning around and seeing all eyes on you ... and you just start talking. By which I mean, it's impossible to plan what I'm going to say/teach/do, every situation is different and I won't know until I get there. But thousands of dollars have been spent to get me here so there's certainly pressure. And I don't feeeeel like I have anything that valuable locked away in my head to share. I think I would have been more terrified before my first project if I'd known what I was getting into. I think I would have been more terrified on my second project, except I knew by some miracle I had made it through the first one ... seemingly with flying colors. It still marvels me that it works.