Day 2 - Friday, August 28th - As often the case things were a bit slow getting started. This first day it rained much of the day, though I don't think that effected much. Some of the members of the beekeeping class assembled briefly to sort things out but it was generally understood we would start the next day. Fortunately we did go out and open some beehives to get an idea of what we'd be dealing with, which was nice because last year we didn't get around to actually opening any beehives until several days in. 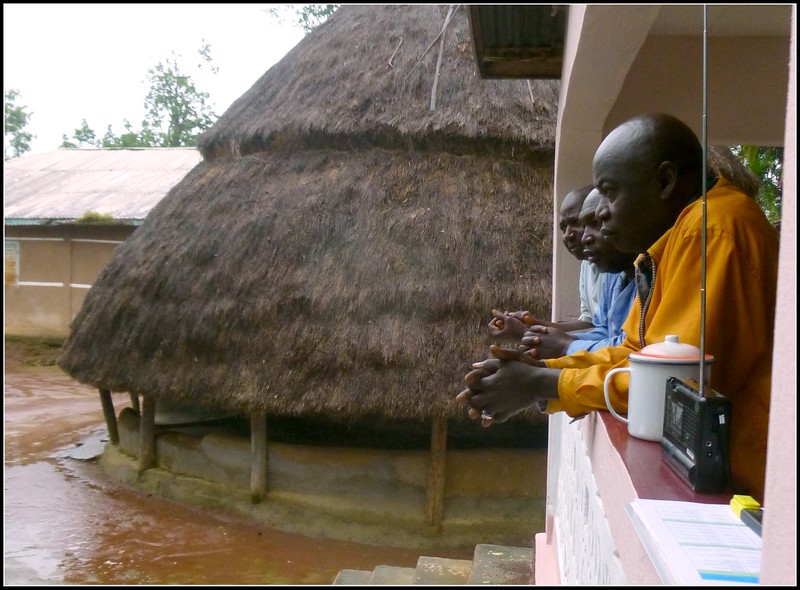 A major highlight was that evening, as we're sitting in the flashlight-light after dinner, my phone rang, my phone from home. It was a (530) area code, which is the Davis (Nor Cal) area where I went to school. I sometimes get wrong number calls from that area code since my phone is also still (530). Anyway I almost didn't answer it, thinking it was likely another wrong number and would cost me over a dollar a minute, but decided "who was that" would bother me too much if I didn't pick it up.
As it turns out it was UC Davis itself. I had applied for a job as the head beekeeper basically, managing the beehives belonging to the honeybee research lab there. They were calling me back for an interview!!!
"So let's see, you're about seven hours south of here aren't you" she said, referring to where I live in California.
"hahaha oh no I'm about 6,000 miles away at the present moment -- I'm in the middle of Guinea." Anyway, reception wasn't great, there was a lot of "what was that again?" so it was agreed that a phone interview probably wouldn't work where I was, but she said they could wait until I get back for an interview. I tried to say I'd drove up when I got back but I don't think that got through, reception was really bad.
Anyway, this development made me really excited.

Day 3 - Saturday, August 29th - I never set an alarm clock the whole time I was there, relying on roosters crowing and voices outside reaching a certain level. Typically around 4am the rain would pour down with a roar (see also: aluminum roof), around 5am the first call to prayer would warble out through the darkness. I always love to hear the meuzzen, though I wouldn't savor the idea of having to get out of bed and pray every morning at 5. Sometime between 7:00 and 7:30 I'd get out of bed and have breakfast of a piece of fresh baguette. They tried to ply me with butter, mayonaise, or honey but I liked to just tear off as much of the baguette as I wanted and sit on the veranda eating it with no further adieu. At first I tried to drink the accompanying nescafe but after a few days I realized I was barely drinking any of it and switched to tea. At some point Kamera (the driver) would turn on the land cruiser to warm up the engine and I'd jump up to go plug my phone in to the car charger, like a chicken seeing chicken feed being tossed out. If the car was at all dirty Kamera would also start cleaning it at this time, truly he takes his charge of the vehicle seriously.
Finally at, I really don't know what time, about an hour and a half later maybe, we would begin every day when a critical mass of people had arrived, the African way of doing things. (:
A portable generator had been acquired and positioned just outside out building and it would be turned on at this time, and as always people would flock to the power plugs like pigeons on bread crumbs to charge their phones. 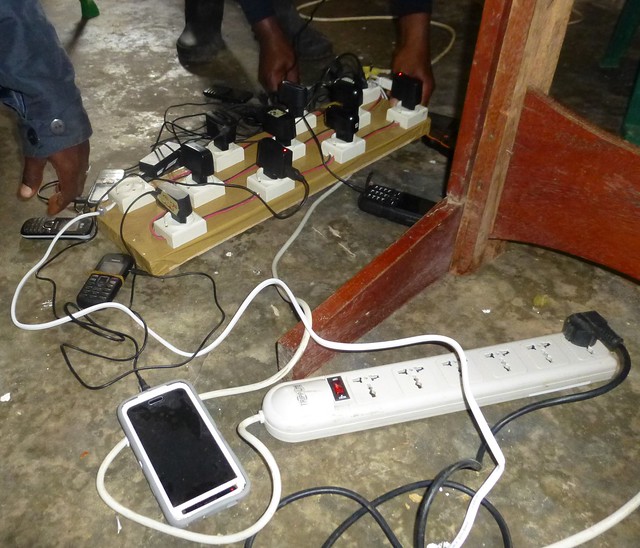 That evening there was an important soccer match being televised between two European teams, which Kamera in particular wanted to watch, so in the evening Damba, Kamera & I went to the karafou (crossroads), where for a few thousand francs a person (ie less than a dollar) we were admitted into a little room that I guess would be the Doumba cinema -- it had benches set up so we could all watch this small TV that was affixed to the wall and had the game on (powered by a generator just outside). There were at least a dozen men in there to watch the game. I wasn't so into the game, even soccer (the One True Team Sport) I can't really get into unless it's the world cup (and national honor is therefore at stake), but it was an interesting cultural experience watching it in this rudimentary fashion. 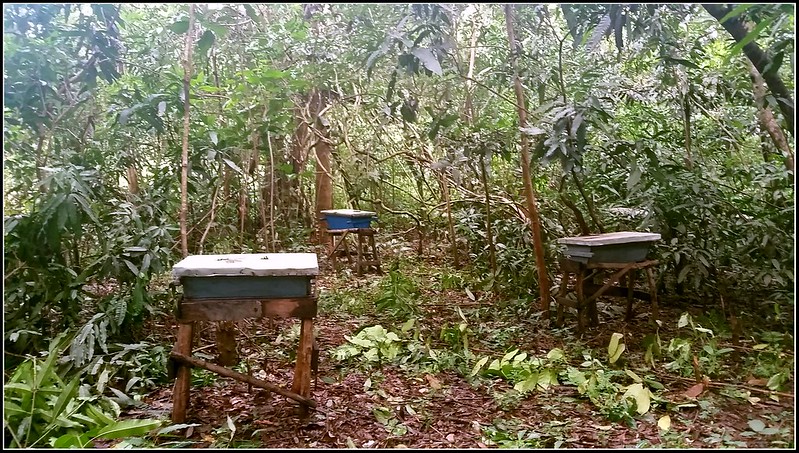 Much Later - Sept 14th - Despite the initial assurance they'd wait to interview me for the bee lab job, which I confirmed later in the week by email, and had then emailed them again a few days before my return to my states expressing my eagerness to come up there to interview ... upon my arrival in the states I received an email saying they had filled the position. Broke my little heart, as the job would have been absolutely perfect. ):