Day 4 - Sunday, August 30th - This morning we got up around the usual time (7:30ish) and, had breakfast and headed in to the town of Labe about an hour up the road. I was greatly looking forward to visiting the village of Sanpiring, near Labe, which is where I had been last year. First we had to stop by a cybercafe in town because Damba wanted to sort out some paperwork. I was getting annoyed, it was taking too long, and for example he wanted me toe mail the head office back in the Capitol asking that certificates be sent to the participants of our program, so I wrote "I'm told that we need certificates" and then he said "no, say that you are asking for them" ...which greatly annoyed me. I wouldn't ask for something without citing a reason anyway and the reason in this case is because I was told they wanted them. So I wrote "the Beekeeping Association would like the certificates mailed..." and THEN I was going to sign it simply "K" as I do short emails abut Damba, who was hovering over my shoulder, insisted I sign the email with my full name. 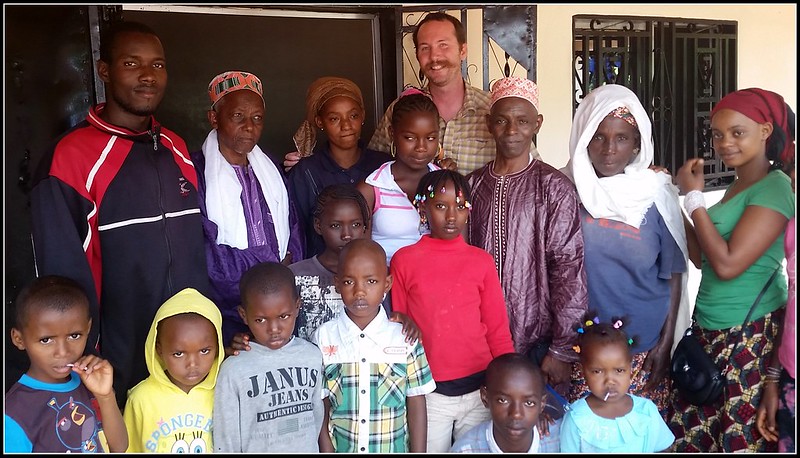 From there we finally headed up to Sanpiring. I was just about giddy with excitement as I recognized landmarks along the dirt road leading to the village. At the village gate a crowd of children happened to be playing and they opened the gate and stood on either side cheering for my return. It was quite the entrance.
As we pulled into the middle of the village and parked I noted that they seemed unusually festive. It turns out a wedding was more or less in progress.
We got out of the car and I greeted the many people I recognized with huge smiles and hugs. "Here is Mamadou de Boba" someone said, pushing young Mamadou forward, who kind of scuffed the ground shyly. "And here is Mamadou de Yaya" Mamadou's 11ish year old brother was introduced and he smiled in his characteristically serious-for-his-age manner, "and here is your wife..." -- recall I had been informed earlier that I had a wife but I hadn't known who it was.
My wife, as it happens, turned out to be a teenage girl of the village whom I'm told "cried for two weeks" after I left last year. I'll have you know I didn't get involved in anything scandalous that would obligate me to take a village girl as a wife and the appellation is more or less tongue in cheek (I think my mother was very worried when she heard about this). Since we don't share a language I didn't talk to her last year other than one time I showed her my pictures from home on my phone. Anyway I decided to go with it and refer to her as my wife on occasion much to Damba's amusement.
It was interesting, I was looking forward to seeing everyone, but especially Mamadou de Boba who I felt had particularly adopted me last year; and I arrived to find I had not one particular adoptee but three -- Mamadou de Yaya also seemed particularly pleased to see me again, and that was entirely before I revealed that I had brought him a present! I had brought a large plastic bee for de Boba and a camera for de Yaya. 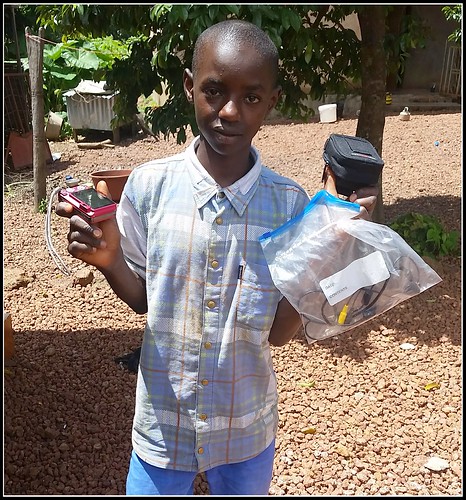 Before I presented these things, almost immediately on our arrival actually, we were told that Abdul, the Mamadou's father, was at the other end of the village with most of the men, so we proceeded over there accompanied by the Mamadous. While we were on our way Damba said to me "I think we have a dilemma -- there is a wedding in progress and doubtless they will invite us to stay, but we already told [the beekeeper association president] we'd have lunch with him." I responded with probing questions like "I don't suppose we could do lunch with him another day?" ... but ultimately I had to depend on Damba's judgement about what was socially acceptable in this situation and he didn't think we should miss our appointment with the president. Further making me reluctant to cancel on him was the funny situation last year of the president and his wife coming to visit us in Sanpiring while Mamadou de Boba and I were out playing in some mud, and then on another day last year his wife had started to make dinner for me but was only informed I strongly dislike fish after it was well underway ... so didn't want to jerk him and his wife around again. Still though, I'd later learn Damba had called Sanpiring the day before and thus presumably knew there was going to be a wedding on before we had agreed to lunch with the association president ... on any case I couldn't help but feel extremely bitter that here we were in my old village where I was loving every minute of seeing everyone again and we were invited to a really interesting cultural event and Damba was in a great hurry to get out of there to go have a simple lunch with someone I'd see numerous times this year. 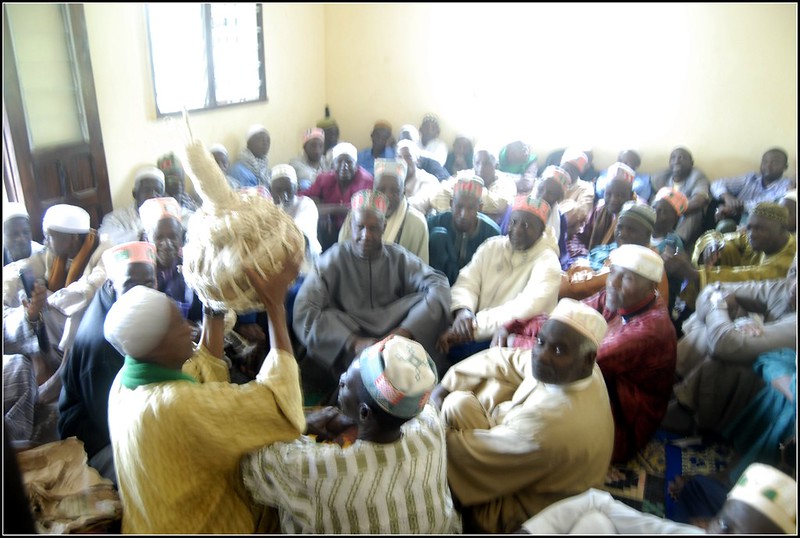 Anyway where we got to where all the men were I found all the younger men seated outside on either side of the path and coming up this gauntlet was Abdul, whom I greeted with a huge hug and then was ushered in to the building there, where all the older men were seated on the floor in the big living room. They appeared to be decorating a large calabash (gourd) with fancy knotwork, and the calabash was filled with kola nuts. This was some symbolic part of joining the families for the wedding. I was given a souvenir kola nut which is now on my desk here as I write this.
After this we returned to the part of the village where the family was, and we were compelled to at least eat a little, though Damba was becoming most frantically in a hurry to get us out of there. There were pictures taken and then I was hurriedly bundled off back into the car, which about broke my little heart because I was absolutely loving seeing everyone and really really would have liked to stick around for the wedding. One thing Abdul said, as Damba translated it: "he says he is extremely happy you are here, there have been many volunteers that passed through here before, but only you have returned."

And then we were off, driving the hour back to Doumba, and I was doing my best not to feel bitter. I'd been looking forward to seeing everyone in Sanpiring again for a year and what fortune there was a wedding on and ... here we were hurrying away.
First we stopped again in Labe to visit Khalidou's family. Khalidou you'll recall is the 32 year old training technician with the association, who had been with us this whole time as well. He has a cute family, a precocious daughter just past being a toddler and a slightly older and much shyer son. Later I asked him how he met his wife, wondering if maybe he met her in the course of his duties traveling from village to village teaching beekeeping -- nope, I was told "oh it's the tradition here that the man's mother arranges it. He didn't meet his wife till the wedding day." (!!) Well it seemed to be working out. 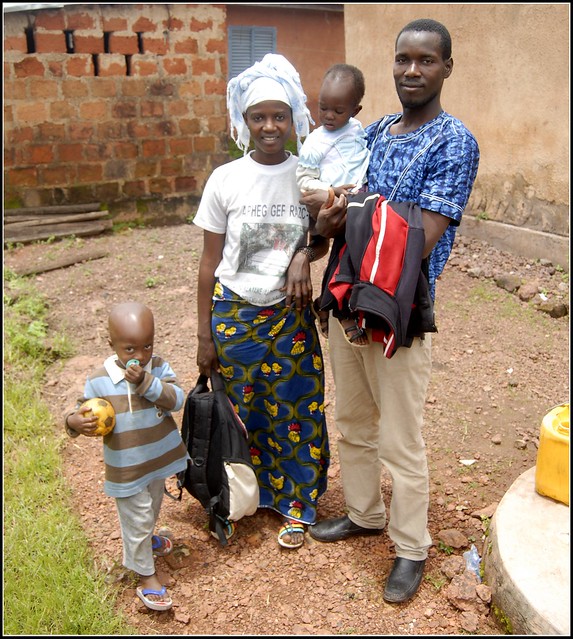 An hour back to Doumba, and the association president lived in the town of Timbi-Madina about five kilometers the other direction from Doumba (ie we could have easily gone over there on any other day.... but I'm not bitter oh no). Timbi-Madina kind of reminded me of what I imagine some frontier town of the Old West would be like, it was bustling with activity, and resounded with the sounds of saws and hammers as people made gates and furniture and things in their shops right on the side of the road. A ten year old boy was busy fixing bikes in front of one shop, no child labor laws here. It was market day so the center of town was really bustling with people in their brightly coloured dresses and gowns, and we had to slowly wade through the crowd in our landcruiser.

We arrived at the association president's place right on time around two, and lunch was alright, I felt bad that I'd been put out of a mood to really relax and go with the flow. After that we returned to Doumba and we spent the rest of the afternoon sitting under the lemon tree, and I tried not to think about how I was just sitting under a lemon tree while I could probably be at a really cool cultural event in Sanpiring... 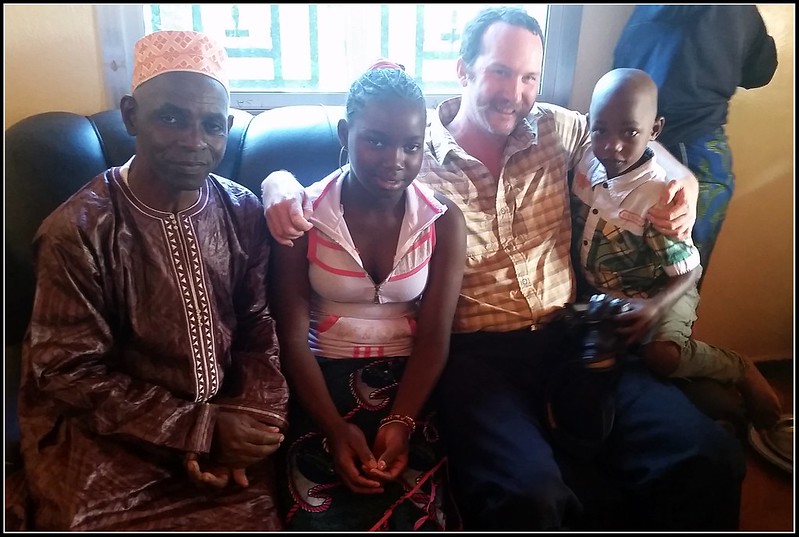