Day 5 - Monday, August 31st - On this morning we finally had a projector ready to go and ... my computer stopped working. Specifically, it would no longer log in to my own profile, I could log in to guest but not access any of my materials! I could log in in "safe mode" but it would't talk to the projector or run powerpoint. Finally I logged in on safe mode, hauled all my stuff into the public directories and logged in again as guest. To this day I haven't solved the problem, still having to log in as a guest on my own computer, and I miss all my customized settings and such. I swear whenever I'm in Africa there is just a inexplicable variety of ways my electronics start to fail. 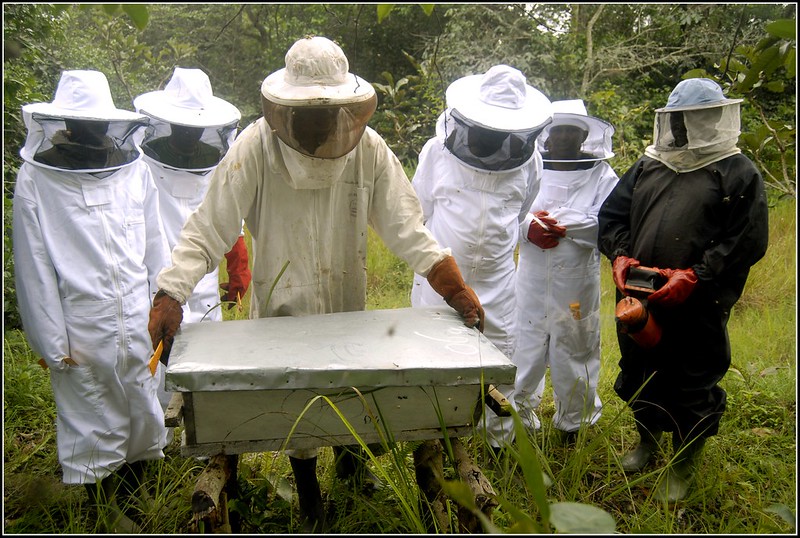 "They have a handicap in the mountains," Damba, my interpreter, informed me after a member of the beekeeping class had raised his hand and said sometihng, "chimpanzees."
Later another man told a story about when he was living in Gabon: he had spent some time training a chimpanzee to be domesticated and then gave it to a family up in the mountains. Later he saw them again and asked them how the chimpanzee was, and they said "oh it was very good, we have finished eating it." :O

In the evenings a bunch of us would usually end up sitting on the veranda or in the meeting room chatting by flashlight-light. They eat really late, dinner wouldn't usually arrive (brought by the women) until around 10pm. Until then we'd just sit around and talk, and afterwords as well. Unfortunately it would be in the local language (Foula), French, or a combination of the two. If French I could usually at least get the gist of what was being said. I'd ask Damba what was being said on occasion but unless it was a particularly good story I'd usually only get a general topic ("oh they're talking about politics"). According to my notes they were talking about marriage and wives this evening. It seems polygamy is pretty accepted here, but it's also pretty easy and normal to divorce. One man was saying he had had two wives and everything was just fine, but then the first one died and after that the second one started to become unbearable so they divorced. He has since remarried and currently has at least one wife. 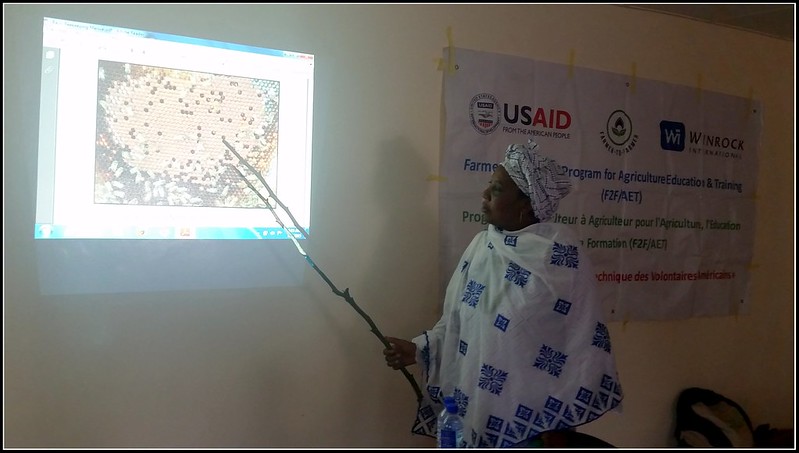 Day 6 - Tuesday, September 1st - Sitting under the orange tree this afternoon after we were done with the days training, one of the older women in the class was telling Damba about her children, and he translated to me: "she has six children, four of whom are still living. One is a doctor in Canada, one is a lawyer in France, the daughter just graduated university in business and management." It always feels a little surprising to hear things like this from people who live in villages of thatched huts. You imagine they have no upward mobility, and don't get me wrong, life isn't easy there, but people who are able to get to school are able to get to college and get out of the village. 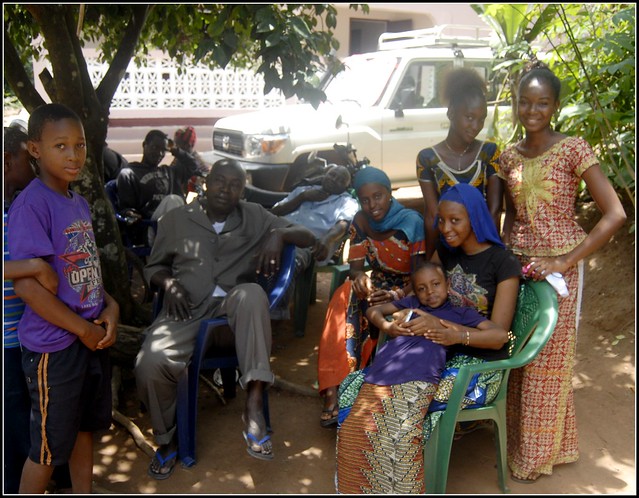 Hanging out under the orange tree was a major afternoon activity

Day 7 - Wednesday, September 2nd - in the late afternoon Damba, Kamera (our driver) and I are sitting by the crossroads (karafou) as one does. Suddenly there's a commotion, some young men are swinging big sticks at the ground just off to the side and people are running over there. It turns out a large green snake was sighted, which is believed to be venomous. The day's excitement!

In the evening I got to talking to some of the teenage girls from my "neighborhood" of the village. It was funny they'd been hanging around on the periphery of things, then as two walked by one pointed at the other and said "she speaks english" and I said "oh really?" and she said "a little" and came and sat down with me under the orange tree, soon joined by her friends. As the darkness gathered I showed them pictures from home on my phone which they found very interesting. 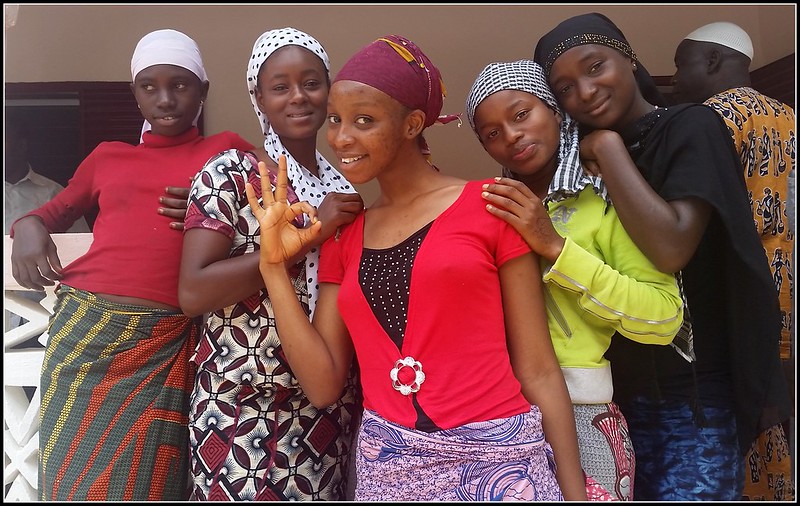 Day 8 - Thursday, September 3rd - They had wanted a "beekeeping as a business" lesson. I don't really get nervous or stress about teaching beekeeping because I'm so well versed in it I just kind of show up and open my mouth and out comes a coherent and useful lesson plan. But being as I'm not a business consultant, when they start asking for an entire day's session on running a business I get a little anxious.
Last year I had let my interpreter, Bara, give them a business lesson since he'd served as the interpreter for many lessons by actual business consultants. But, and maybe it's just because it's what was most easily retained in his memory, from what I could gather listening in as he spoke in French, that sounded to me like more of a lesson on all the business related cliche buzzwords.
One interesting thing that became apparent was a deeply ingrained socialist mindset, which I remembered from last year as well. It's funny how anathema such a mindset is in America. I was trying to highlight that there are some things that they can best do as individuals, some things that it would be best for them to cooperate at on the village level, and some things it would be best for the regional organization to organize, so I had made a chart with three columns and asked them to list the pros and cons of doing things at each level ... but ALL I could get out of them were recitations of slogans about how it is best to do things together and the individual is weak etc etc etc. Personally I think there are definitely economy of scale advantages to doing things in larger groups but I believe the only real motivator is self interest and they must see an individual reward for their actions. A lot of the hives are communally owned and I think that leads to lax management as no one is individually responsible for them. Also I tried to teach them that while they're waiting for the regional organization to solve their problems, bigger organizations are much much slower to implement things and they should look to solutions on their village level in the meantime (example, waiting for the regional organization to find a way to bottle and sell their honey).
It also became apparent that there were some serious communication problems between understanding what the regional organization's responsibilities and services were versus what the regional organization thought the villages should be doing for themselves, so I dusted off my old Learnin from when I was a communications minor in college (focusing on organizational communication!) to teach them about how clear and distinct lines of communication with designated responsible people could help them work together. I don't know why so many people act like communications is a useless major. 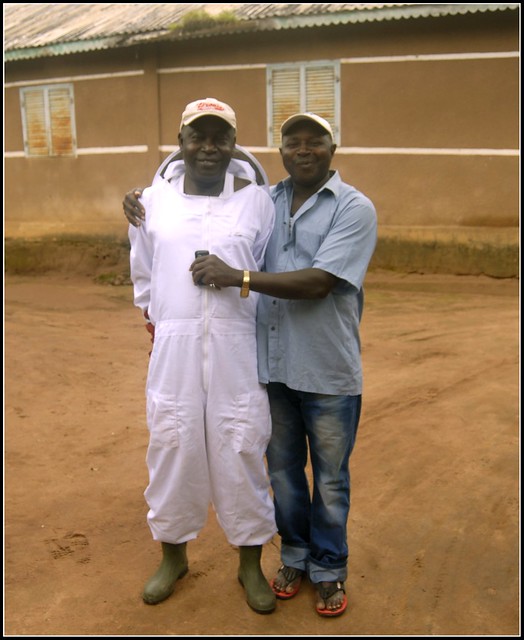 That evening Damba, Kamera and I drove into the town of Timbi-Madina five kilometers away, I think just for a change of pace. Two of the girls came along as well primarily I believe because you can get a cell phone signal in Timbi-Madina but only barely in the village of Doumba.
In addition to the colourful African robes, in Timbi-Madina there are also the occasional women wearing black Islamic body coverings, with so small a slit for their eyes at first glance it looks like they don't have a way of seeing at all. But then you'll have two fourteen-ish year old girls come by on a motorcycle dressed African casual (t-shirt and long skirts). I'm told there's no driver's license system in Guinea. If you can afford a vehicle you can drive it (and/or if your parents can afford a vehicle and let you drive it).
After asking around at a few little shops Kamera and Damba found what they were evidently looking for, a woman selling grilled meat on skewers from a little shop on a corner. I thought for a second of all the warnings I'd heard about eating grilled meat from roadsides in Africa, but I think that mainly applies to questionable grilled meat that has likely been kept in unhygenic conditions for hours or days -- in this case I could see the fresh meat that looked pretty good and see that it was being grilled right there in front of me. It was really good.
...and probably a lot safer than the salad I had later that evening which was after all uncooked and washed in local water. This whole trip I never had any intestinal discomfort other than that caused by my fear and avoidance of the hole-in-the-floor-toilet. 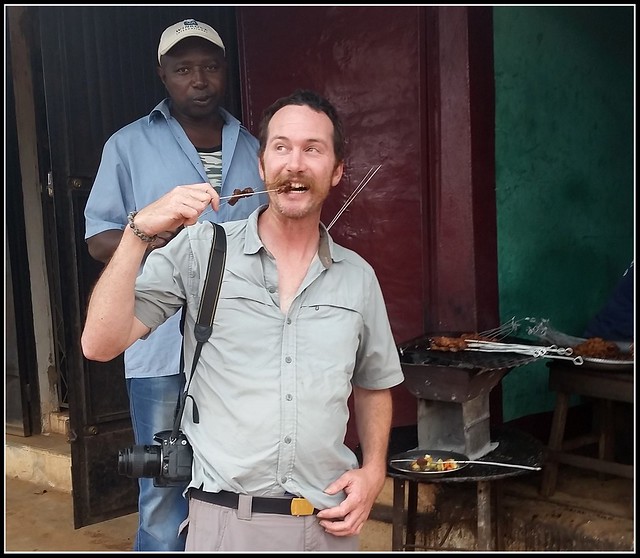 Day 8 - Friday, September 4th - A definite highlight of my day was Abdul, my old host from the village of Sanpiring, visiting us in Doumba. I love this man he has a quiet kind dignity, and an old weathered face that's quick to break into a smile. I learned that after last year's training he was able to significantly increase his honey production, selling several hundred dollars worth of honey (which keep in mind is a fortune there), which allowed him to repaint his house.
We were also joined by Aissa (Aissatou actually, but not to be confused with one of the several other Aissatous in the village), the female training technician with the beekeeping federation. She had been in the capitol getting a passport so she could travel to nearby Senegal for some sort of training. She had also been present last year so she was another welcome familiar face. 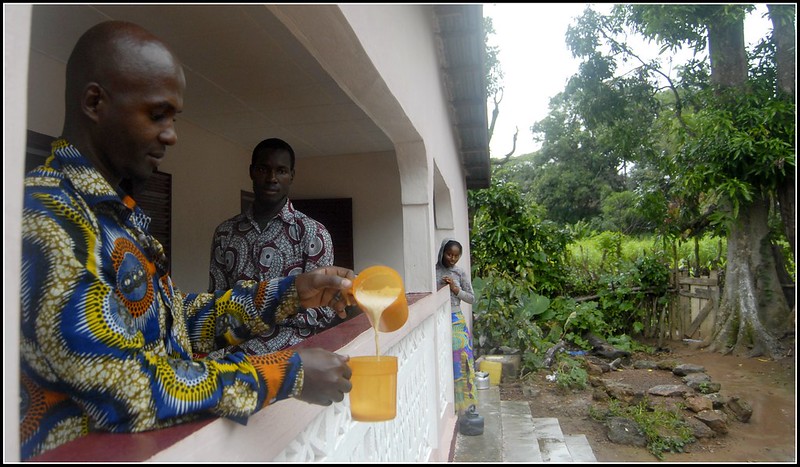 Day 9 - Saturday, September 5th - by now I'd run through all my organized lessons on beekeeping and somehow filled up the day with questions and answers and miscellaneous topics. I think it's a testament to how interested the participants were that even when there was an awkward silence while waiting for someone to bring up another subject to talk about, everyone sat attentively waiting.
Two other daily rituals are worth commenting on. (1) One of the participants, Karim, would always be boiling water in a little teapot on a small stove (by which I mean actual hot coals) on the veranda and then, after adding tea leaves, some mint leaves, and probably an alarming amount of sugar, would pour the tea from cup to cup over and over again until it had a thick froth.
Usually around the time we finished the lesson he would use his last boiled water to boil peanuts (readily available locally) and then serve them to us while we sat under the orange tree. I thought this was a novel new way of having peanuts but then I met an American from the South who said boiled peanuts are a staple down there. Who knew!
Saturday night found us down at the Carafou (crossroads). There wasn't terribly much going on there (though still a fair number of people hanging out). Kamera played us some music on his phone and we joked about it being a wild Saturday night in Doumba. We were joking but I'm sure I'll fondly remember that relatively quiet Saturday night at the Doumba crossroads long after I've entirely forgotten nearly any Saturday night of partying in a Western city.