The Last of the First People

Thursday, October 15th, Day 11 - This morning I'm sitting under a large acacia tree eating baobab porridge. I don't know what time it is, there's no electricity to charge my only time piece, my phone, but that's okay because I'm pretty sure no one else knows what time it is either. Baobab porridge is kind of like rice pudding, but not as sweet -- they have no ready supply of sugar. I'd like to tell you I'm eating out of a gourd or calabash but its actually a pink plastic bowl. I missed the truly authentic life by about fifteen years I think. Around me are the Hadza, the "last of the first people," traditional hunter gatherers. They sit around me in home made chairs of sticks tied together with antelope leather. The men are wearing mostly jeans and t-shirts that had been donated to thrift stores in the US. The women wear simple dresses of colorful African fabric. Nearby there's a low hut that looks like what we'd call a wigwam in America, it's in actual daily use. 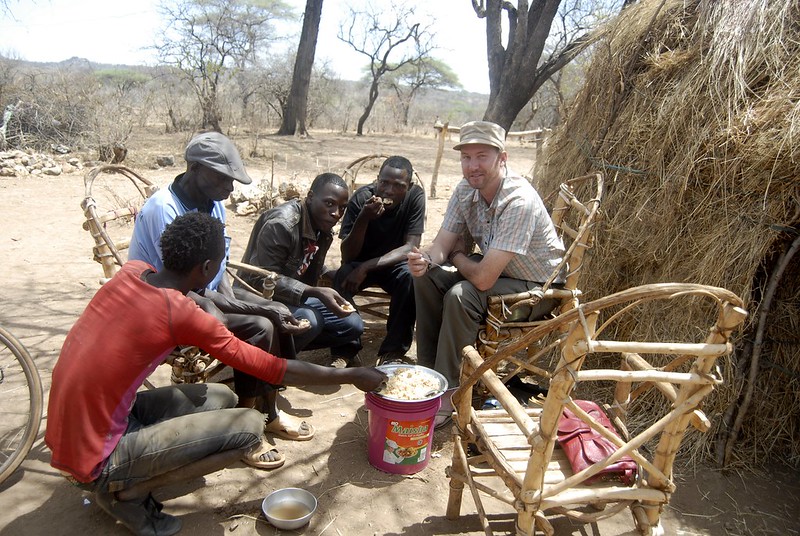 "So if you don't mind my asking, what is the typical yearly income around here?" I ask the one young man who speaks some English, I need to establish a "baseline" income to compare to later, this will be important in future fundraising, to be able to point to an objective benefit from the project.
"We have no income."
"Has anyone sold anything outside the village in the last year?"
"No we don't have anything to sell"
"What about those cows?"
"They belong to our Maasai neighbours, we are just hunter gatherers."

You read about them, you see them on national geographic, but its kind of shocking to find yourself right in among people who have an annual income of zero dollars. Every morning they range around the area looking for fruits and nuts. One afternoon we were going to do some beekeeping training and I noticed all the young men were absent. "Where are all the young men?" I asked.
"They're hunting" was the answer. And not with guns -- It wasn't uncommon to see them walking around with bows and arrows (wearing jeans and a t-shirt that might be emblazoned with the name of the cheerleading squad of some midwestern high school).

It had been a long journey here: by air from Los Angeles to Dublin to Addis Ababa (Ethiopia) to Nairobi (Kenya), bus across the border to Arusha (Tanzania), then I'd gotten a ride with the governor of Singida Region to Singida, followed by a day-long journey with local government officials to the furthest little town we could reach by car (even then after driving on a rough cattle track awhile), and finally, the next morning, hiking three hours to this village. Now my intrepid translater, Neema, and I were here deep deep in the middle of nowhere, until the local government officials should (hopefully!) come pick us up the following Sunday. With no way to communicate and having experienced all sorts of flakeyness in Africa already, all week I was very much crossing my fingers when I thought about my pickup out.

My purpose out here? To teach them beekeeping. The governor, Dr Parseko Kone, had given them almost 300 beehives (out of his own pocket I think), but there was no one available to give them any training whatsoever. So they just hung them in trees and hoped for the best.
The first half of the day they pretty much dedicate to finding food, so training had to wait until the afternoon. I'd spend much of the morning sitting under the acacia tree reading a book (Richard Henry Dana Jr's, Two Years Before The Mast). In the afternoon the first few days I "lectured" about bees and answered their many questions, and then we got to the fun stuff, opening up beehives! Young men who weren't interested in learning about beekeeping seemed to spend the evening playing soccer on a nearby pitch of land that had been cleared for that purpose.
A local beekeeping supplier here in California had donated a whole bunch of bee suits to my organization (Bee Aid International), which greatly helped. Since the beehives are all up in trees, one of the young men who particularly excelled at tree climbing would have to climb the tree first, attach a rope to the beehive, and lower it down. They put the beehives up in trees like this as protection against honey badgers.

Last month I was in Guinea where the villages were all close together and enclosed by a fence, the "village" here was quite different -- it was more like a loose grouping of huts, all pretty much just out of site of one another through the thorn bushes and acacia trees (about 100-200 yards apart). Almost every dwelling seemed to consist of both a dome shaped wigwam hut and a rectangular structure either made from locally made bricks or mud and sticks. I'm told there are more Hadza who still live an entirely traditional lifestyle, but they avoid other people and keep moving deeper into the bush. 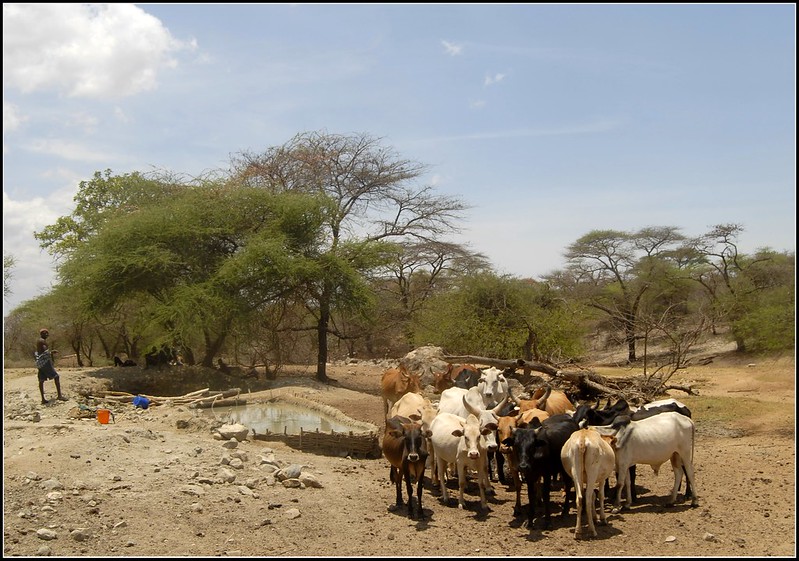 Dr Kone had also sponsored the construction of two pumps and commented when I talked to him afterwards that ground water is plentiful there. "But I don't want to give them too much water, or else the Maasai will push them off their land." I already saw Maasai herdsmen hanging around one of the pumps, where they had constructed ponds to collect the water so their cattle could drink (see above). Dr Kone's plan is to get the idea of land ownership more firmly established among the Hadza before risking having them pushed off the land by the Maasai. You see, not only are they hunter gatherers with no income, neither they nor the Maasai have any tradition of permanent land ownership, both groups have always been nomadic.

I really enjoyed the evenings, when Neema and I would go to the village chairman's dwelling place for dinner. We had packed in our own spaghetti and beans, though the Hadza were very willing to share what little they had with us (at one point I thought I was eating chicken until I realized the foot, which was still attached, was much much too small for a chicken -- I think I ate a sparrow or something). The food would be cooked over a campfire (is it a campfire if you live there?), and I've always loved campfires. The sun would set into the acacia forest and an amazing number of stars would come out overhead. ...and then the modern world would interject as the chairman had a radio he'd turn on after dinner and his kids would all gather around and listen to the tinny cacophonous music, which usually drove me away. 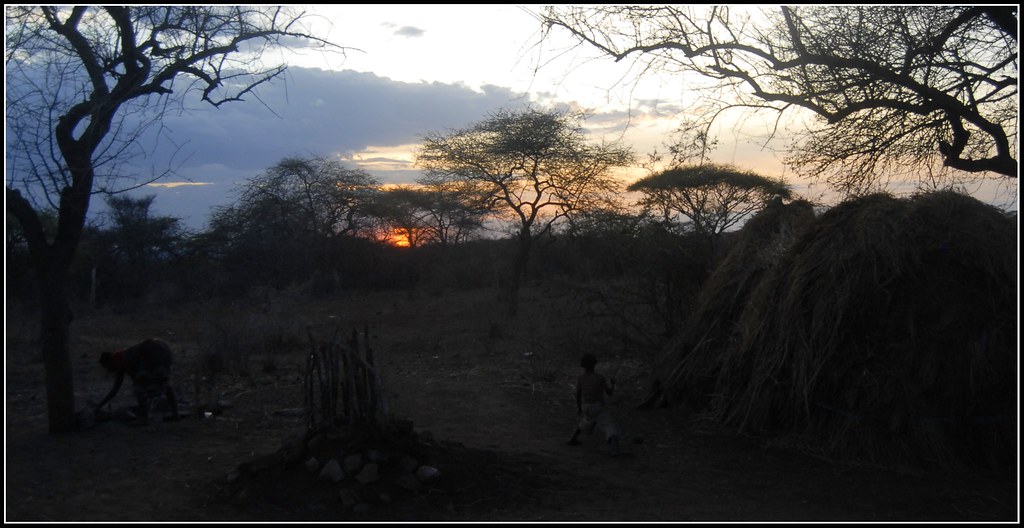 I wish I could give more day to day details but my phone, on which I was keeping my notes, was later stolen, and I have the memory of a gold fish.

After several days Neema and I had drank all our bottled water and all the bottled water they sold at the little shop someone maintained there (a closet sized kiosk of mud and branches stocked with a few sundries and had to resort to drinking soda (which the shop had in greater supply) -- #thirdworldproblems.

When the appointed Sunday rolled around in the afternoon the government landcruiser did indeed roll in (it had found a road in but it took several more hours and was really rugged), and we bid everyone adieu. Hopefully I'll see them next year and we can build on the training.
Neema and I got into the vehicle, it had been a great experience but living with hunter gatherers in the bush is a harsh life with few amenities and I think we were both ready to return to the real world (plus being out of food and water). As we drove off I looked forward to my next project in Zanzibar, but little did I know at that point I'd instead soon find myself stranded on a deserted island trapped between jagged cliffs and a tide that was up to my waist and rising ... but that will have to wait till next time [to be continued!] 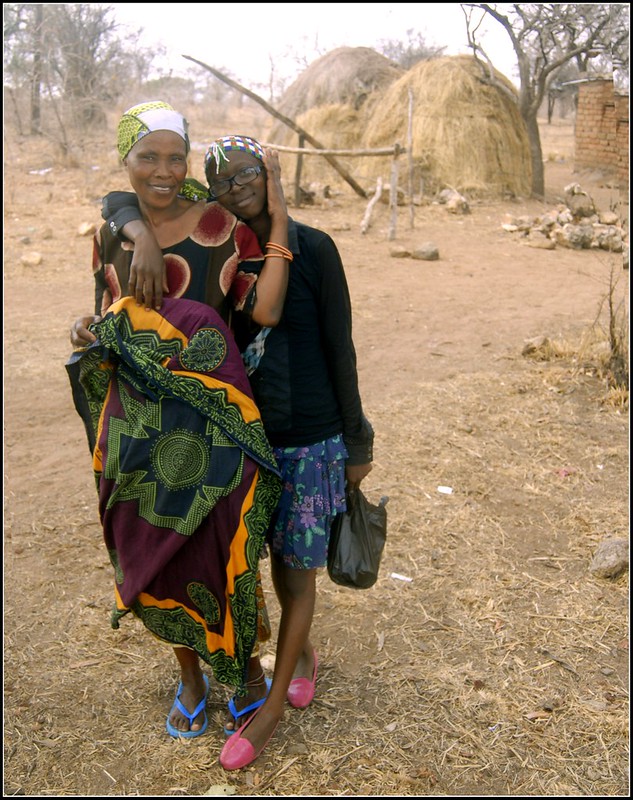