Friday, October 23rd, Day 19, Nairobi, Kenya - For years I've made jokes about giraffe tongues, for example "how will we get the last of the peanut butter out of the bottom of the jar?" "oh just use your giraffe tongue." I suppose this was inspired by some nature documentary I once saw.
There is a Giraffe Center on the outskirts of Nairobi, dedicated to the breeding of the endangered Rothschild Giraffe (Random Giraffe Fact: did you know there's nine species of Giraffe? Some are fairly plentiful but some such as the Rothschild are dangerously endangered. All I know about giraffe species identification is one of these species looks like it's wearing white knee socks). But let's back up a bit before we boomerang back here.

My friend Grace met me at the bus stop as I arrived from Moshi on Thursday. I invited her to follow me to Uganda as well but she wasn't sure she'd be able to make it, she had some work she had to do.
But in the mean time we had the weekend, so we decided to go on an adventure to the elephant orphanage and giraffe center. This time I used the hot tip my friend on the Arusha-Nairobi bus had given me and we used Uber, which indeed worked really well, we ended up using the same uber driver all day, he'd just wait for us in the parking lot, and the rate seemed a lot better than the rates taxi drivers had been giving us.
We got a spot lost finding our way to the elephant orphanage, since the map-pin on tripadvisor had been put in the wrong place. They feed the baby elephants once a day over the course of an hour and we unfortunately only made it there in time for the last ten minutes of this. Nevertheless the baby elephants were adorable and full of personality, grabbing oversized baby's-milk-bottled with their trunks and squeezing it into their mouths, as well as tussling with eachother playfully or nuzzling up to the staffmembers fondly. During our short time we were there I was able to get many pricelessly adorable pictures, all with my phone since my DSLR battery was still dead ... and as my phone was subsequently stolen THEY'RE ALL GODDAMN LOST ::sobs in the corner for a few minutes:: except this one which I had uploaded to instagram: 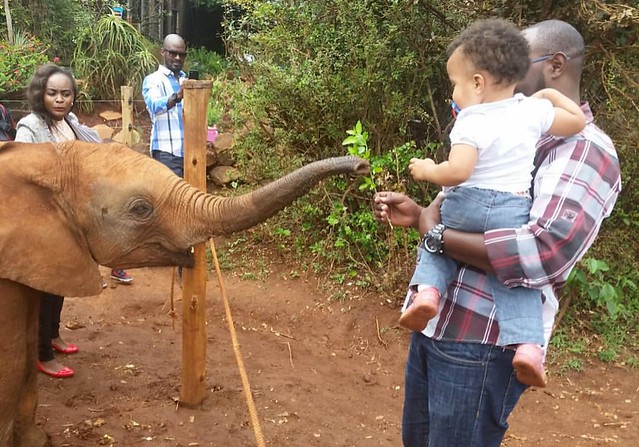 I had a great picture of myself scratching a baby elephant behind the ear which I deeply regret having lost.

From there we went to the giraffe center, which wasn't far. The Giraffe center has a raised platform that puts you on eye level with the giraffes, whom you can feed pellets. The pellets look like giant rabbit pellots, you feed them one at a time by holding your hand out with a pellet on it, and the giraffe eagerly leans in and extends its long purple tongue a foot or two to take it from your hand. Your hand might be a bit slimy after this (though they didn't slobber as much as one encounters when feeding a horse an apple, moisture is probably a premium for them), but random giraffe fact!: giraffe saliva is naturally antiseptic! So it's good for you! And a giraffe can literally "kiss it and make it better!" Though my mother, who knows these things, informs me all saliva is to some degree antiseptic, I choose to believe giraffes have magic saliva.
Grace was grossed out by these snake-like giraffe tongues, though she did get brave enough to feed a giraffe one pellet and suppressed the urge to shriek when the giraffe tongue came out. They generally seemed impatient with pattings but would permit one to pat them if they were distracted by pellet eating, so I was able to cop a feel on one of those giraffe knobs atop their head (another lifegoal I didn't know I had).
Then I had a funny idea. As a joke I held a giraffe pellet in my lips and pretended I was about to tempt a giraffe to kiss me. I put it back in my hand before I received giraffe smooches but one of the staffmembers saw what I was doing and nodded eagerly that it was doable -- then he did it himself, placing the pellet between his lips and letting the giraffe come in and take it from him.
I still wasn't exactly inspired to do this but Grace decided this had to happen and kept wheedling me till I gave in. So I placed a giraffe pellet between my lips and: 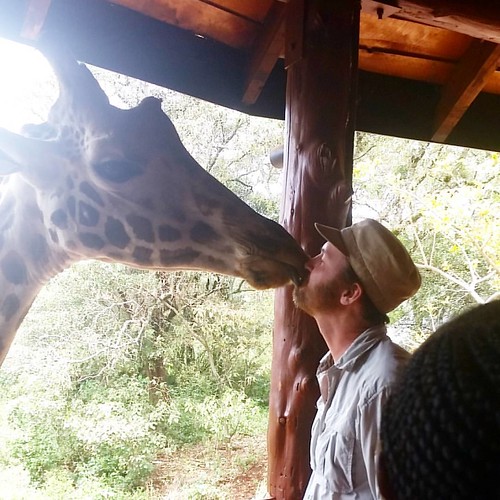 Grace shrieked in some combination of horror and delight and managed to get a picture of it, which I fortunately posted to instagram so its not lost like every other goddamn picture I took of the giraffes. Despite having been entirely the instigator of this, Grace proceeded to act like I was covered with giraffe cooties and wouldn't let me get near her for a little bit, randomly breaking into song with "I kissed a giraffe and liked it!" to the tune of Katy Perry's "I kissed a girl and liked it."

There was a little gift shop on the grounds that was selling mostly $1 carved wooden birds as christmas ornaments. On the back wall I cast my eye across a huge dusty wooden spoon. I wasn't even sure it was for sale, since it seemed different from everything else she was selling. "How much for the spoon?" I asked in a tone calculated to sound half joking.
"3,000 shillings" ($30), she said, also as if she didn't really expect to sell it. She took it down and let me hold it, saying "hardwood!" And indeed, it had some heft to it. On the pommel end three faces are carved, in the middle held inside by a sort of cage carved in it was a ball which must have been carved in-situ inside the handle since it was all one piece. By and large I try to avoid big heavy souvenirs, which this definitely was, but I know something absolutely epic when I see it!
"I'll give you 2,000 shillings for it" I said, as if I wasn't really serious and could just walk away chuckling.
"2,800" she countered.
"2,500 and one of this bird ornament?" I countered, which was accepted (bird value: 100 shillings. I have no regrets at all about getting this epic quest artifact, which I have named THE SPOON OF JUSTICE, and have since proudly showed off to anyone who has come anywhere near it. I've given it my dear mother to hang in her kitchen (where it hangs near an epic decorated horn from an earlier trip). People ask what it's "for," which I think is obviously hanging from walls but we joke that you stir cannibal soup with it.
The bird I got was a cute pied kingfisher, a bird I'd seen earlier. Unfortunately I ended up leaving it at Grace's place at the end of the trip. 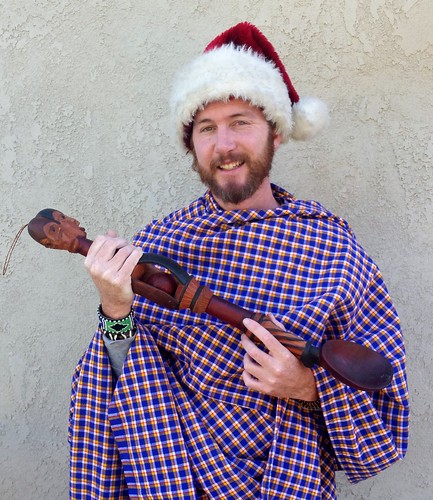 Here I am much later (ie this morning) modeling the Spoon of Justice!

There was a nice little nature walk path attached to the giraffe center, which, as it had "giraffe crossing" and "this path for giraffes only" signs must be part of the giraffe enclosure. Among other things I took a picture of a big wasp with wings that faded from orange to purple and looked like it might belong to the Pepsis genus that I also deeply deeply regret having lost.

After the weekend, my plan was to head to Uganda. I asked Grace again if she wanted to follow me to Uganda, since it looked like I'd just be arriving there briefly and boomeranging back two or three days later (spoiler: I would not be returning that quickly!), and despite my having giraffe cooties she agreed to come along! She'd never been to Uganda before. I'd never been to Uganda before either! I had googled a bit on my phone and as far I could tell I _probably_ could get a visa at the border and going there _probably_ wouldn't invalidate my existing single-entry-visa for Kenya, but as we would be traveling overnight, and we'd be crossing the border around 2am, I was really nervous the visa office would be closed.
Left most of my stuff at Graces place, only taking enough clothing for Grace and I for two or three days. Caught the bus around 5pm ($15 or $20 each for us to get to Kampala, Uganda, 12 hours away). Bus was a big coach style bus, I was the only westerner aboard, I think muzungus usually fly. As we rumbled through the night we mostly slept, there were the usual stops every few hours for people to use the bathroom. Didn't get much of a view since it was night. When we finally arrived at the border crossing we had to disembark to walk through. It was 2am, the ground was damp and muddy from recent rains and lightning flickered over the western horizon -- over Uganda. TO BE CONTINUED!