Monday, October 26th, Day 23, Busia Kenya-Uganda border crossing, ~2am - Lightning flickered in the dark night sky to the West, over Uganda, as we filed out of our bus into the cool night air. We made our way across the muddy street, carefully picking our way around the large and numerous puddles, to the Kenyan passport control building. Inside this building everyone else on the bus queued up at the "Kenyan nationals" line while I was the only one to go to the "international travelers" window. I tried to wait with Grace in line but I customs official yelled at me so I had to continue down the corridor leading out the other side of the building into No Man's Land. I checked in to "swarm" on my phone and was somewhat amused to find "No Man's Land" listed as a "travel lounge."

Presently Grace came out and we continued to Ugandan passport control about 100 yards away. There a bunch of money exchangers descended on us like mosquitoes. We had to go through a metal detector to get into customs but I didn't bother to empty my pockets and even though I set it off no one stopped me, sometimes you can tell they're just not taking it seriously, and as we say, usichokoze nyuki, no need to disturb the bees if you don't have to. I had been very word they wouldn't be issuing visas at this hour but they were in fact. Ugandan sitting behind the window in a military uniform was surprisingly chipper for the hour and cheerfully informed me I couldn't come to Uganda for just two days ... leading me for a moment to fear it was some visa nuance but he continued "it's just too beautiful!"
Unfortunately though I thought I had kept $100 USD in my wallet for this purpose but found I had used $20 for something and now only had $80. The visa was $100 or 10,000 Tanzanian shillings, and I only had about 9,000 Tanzanian shillings. Fortunately the passport control officer, who was perhapds better caffienated than me, had a jugaad for this problem and told me to just go change $20 with the money exchangers. And my inititial instincts to avoid them sure were right because they gave me only about 66% of the value that $20 should have been!!! Feeling a little violated by this I returned to the window and got my passport stamped.
From there we re-boarded the bus and continued for about five more hours from Busia to Kampala, skirting the northern edge of Lake Victoria, and crossing over the Nile near its headwaters at some point, but I think we were both asleep. As the sun rose we got our first glimpses of Kampala -- it actually looks pretty good as far as African cities go, the streets were broad, most of the buildings lining the streets were around five stories tall and didn't look like they were about to fall over or anything. There was some traffic coming in to the city but nothing compared to what we'd see later in the day. Another distinguishing feature was that with funding from USAID there was apparently a lot of AIDS awareness advertising afoot, with billboards practically every 100 feet with an AIDS awareness themed message. One of our favorites was of a cool looking young man in his twenties with the caption "I'm proud to be a virgin!</i>" ... I'm sure the friends of the model used in that picture rib him no end about that one. I took a picture of said billboard for posterity but of course... lost.

Arriving at a bus stop around 7am we got out and cast about for a taxi. I thought it was a bit odd that most of the guys lingering around trying to solicit our business were boda-boda drivers -- motorcycle taxis. I'd later learn that they're actually the major way to get around the town since the traffic later in the day makes it a nightmare getting around by car. But also a lot of boda-boda drivers are young men who had been recruited into the Lord's Resistance Army as child soldiers and now had no skills and no family other than driving bodabodas -- one can feel for them, but also is bound to be pretty leary of trusting your life to someone on so flimsy a machine who might be seriously mentally imbalanced by the brutal conditions they'd been through (child soldiers are sometimes made to kill their parents as an initiation!)
Anyway we had big bags so we found a taxi nearby, the driver was also a youngish fellow, Grace told me she'd have rather found an older driver, and especially after the shenanigans that ensued insisted that I should have let her choose one. Anyway as always I had found the hotel we'd be staying at on Tripadvisor on my phone (and just from the information there it looked pretty nice!). As _always_ he quickly said he knew right where our hotel was, but as I've commented before, this is a universal lie you can count on. Right away I noticed the driver was going the opposite direction, so I showed him the map on my phone, to which he mumbled something I couldn't quite make out. As we continued to drive the wrong direction both Grace and i tried to tell him we were going the wrong direction, but despite him speaking some English and sharing Swahili with Grace we never really got a straight answer from him. With panglossian optimisim I hypothesized that he was taking us out to the ring road to avoid the traffic in the center of town but no he kept going, over our objections. Finally he stopped at a gas station and had admit he was lost. To a certain extent I could feel a fremdschamenian sense of embarrassment for him, knowing that he was lost and his two passengers were getting increasingly angry with him. I showed him the map on my phone again, it seemed pretty easy to find on the map, and it's not like you even need to be literate to see where the marker on the map is but he seemed to have zero comprehension of how to read the map. I could see that if we took a specific road we were near it would take us in the right direction, so I tried telling him "A 109" "Take A 109 that way!" "that road, take it that way!!" but for some reason the dastardly p'takh was either unable or unwilling to comprehend or execute my instructions and retracted his steps exactly back to our origin point. By now it was well on 9am and mornign rush hour traffic was full on, such that it took us more than an hour to get back to the place we started. Since he retraced his route exactly I suspect he hardly knew his way around the city at all, I don't know who gave this shlemiel a car! Grace suspected he was drunk but I didn't really see any signs of that.
"Ah, well," I said, "at least this way we can have him drop us where we came from and there'll be no debate that we don't need to pay him for this colossal ferhoodle!!" But to my alarm we passed the bus stop and kept going!!! Fortunately this time we were finally headed directly toward the hotel, otherwise I probably would have absolutely demanded he let us out.
Once we were headed in the right direction it was pretty simple, down the main road toward Entebbe a few miles and then down a side road through a labyrinth of residential houses but fortunately there were signs pointing the way here. We finally arrived at the beautiful Malakai Eco Lodge, an oasis of gardens and ponds amid the haphazard suburbs, after about two hours of shenanigans over a trip that should have taken 20 minutes. And then, AND THEN, the knave had the nerve to demand of us not only the fare from the bus stop (I think around $30? again all my notes are lost), but something like another $20 specifically for the wild goose chase. He was utterly unblinkingly unmoved by my arguments, soon joined and reiterated by the hotel manager, that I should in no way have to pay for a journey I had not only not asked for but had in fact repeatedly told him was incorrect. He was unmoving but finally I just put the $30 for what the fare _should_ have been in his hand, turned my back to him and walked away without looking back. 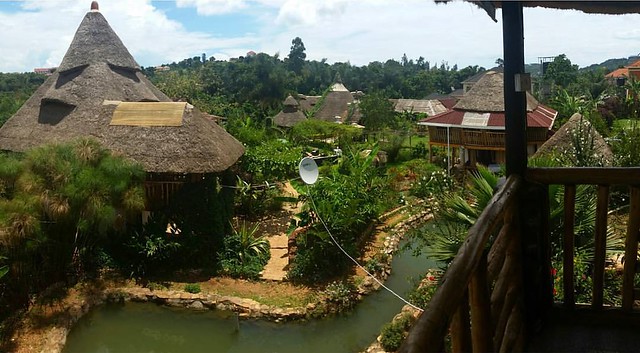 Finally grace and I were able to breath a sigh of relief and look around at the beautiful peaceful place we had found ourselves in. The lodging in the eco lodge seemed to be all be in freestanding sort of "hut" shaped buildings, which were luxurously furnished. Between them there were ponds full of fishes and well manicured gardens. I couldn't believe we were getting a room here for only $45 (turns out that was a special and its usually $145). The managers are a Belgian man and his Ugandan wife, and their three young children could often be seen frolicking about the gardens. To be continued!