[I missed last week's LJI deadline due to mistaking the due date, but still wrote an entry, please check it out (: ]

Thursday, October 29th, Day 26, Bweyale, Northern Uganda - As is all too often the case, we didn't get to actually openign any beehives until we'd been in Bweyale several days, until the last evening we were there actually. People are often enthusiastic about showing me beehives sitting in fields, but opening it up? Oh noe, we have to do that later, we're not ready now because we uh, didn't bring the suits or the smoker or there's children playing nearby. By and large it all amounts to excuses. I get it, opening beehives can be intimidating, and I think that's one of the single biggest obstacles to overcome with training, if you're always apprehensive about opening your beehives you won't do it enough, you won't take good care of them, but if you just can't wait to see what they're doing and you're constantly telling yourself to give the bees at least a week before opening them again so as to not bother them too much, and feeling impatient about that, then you have the right idea.
Alex had said we'd go see the bees the evening before. He initially proposed something like 8 or 9pm, I said "how about 3pm?" I think we compromised on 5 but he waffled around didn't show up till nearly eight and then I declared it was too late.
Unfortunately, Alex, who is otherwise very forward thinking about development projects, was solidly possessed of the pernicious belief that beekeeping should be done at night. Another significant thing I try to change, since you can't see things like pupae, much less eggs, or anything else really, in the darkness of night, especially while wearing a bee suit. 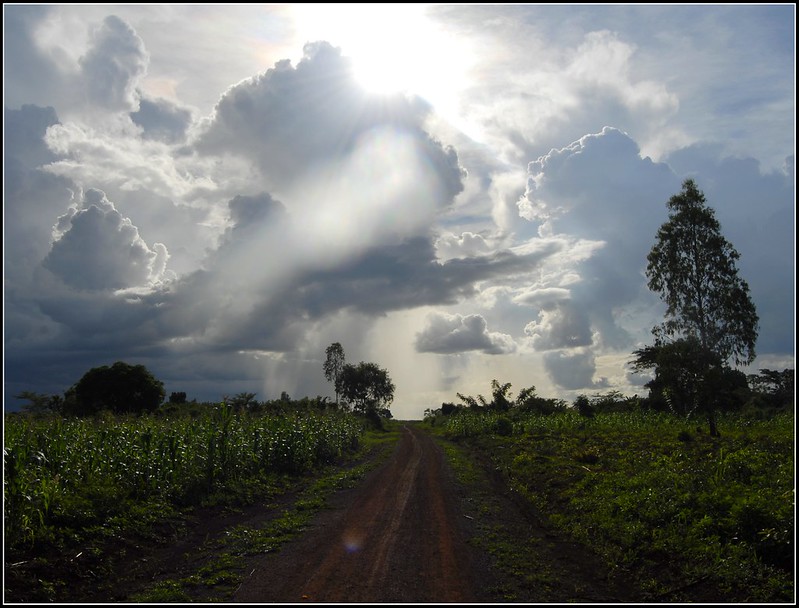 The road just near the field with the beehives, as seen during the day. Picture from my DSLR, notice the big ugly splotch that looks like bird crap on the lense ): ):

So Thursday evening we again compromised on 5pm, twilight, and once again he was late arriving (this is a common Africa thing, "Africa time," he'd usually pick us up in the morning about two hours after he said he would), and by the time we got to the field with the beehives it was pitch black out. I groaned inwardly about this but it was the last evening and I did want to see how the hives looked on the inside.
We tromped along a narrow path between waist high crops (corn? cassava? I don't remember exactly), lighting our way with flashlights. Grace would occasionally shriek as some giant insect flew into her face, attracted by the flashlight. Finally we arrived at a little clearing next to a hut. The hut was the storage shed for beekeeping supplies ... and they had forgotten the key! Fortunately we had bee suits but I think it contained all the smoker fuel. Two young men who had come with us started a camp fire to get fire going for the smoker. This took some minutes and I took the time to enjoy the cool night air, the small of damp organic earth, the infinite stars overhead (stars are pretty good in rural Uganda!), and the hut flickering in the campfire light.
Creepy crawly things in the night were bothering Grace so she opted to return to the car and wait for us there. Finally we got the smoker going, donned locally made bee suits, and went to check out some hives. As predicted, through the obstructive netting of the veil, one could hardly see anything, we were just bumbling around in a void. Pretty soon we had bees all over us and in our suits. They work bees at night because they believe the bees won't be so bad, but bees are very crawly at night and frankly I think that makes them more likely to get into a sub-optimum bee suit -- certainly I think all my most unpleasant getting-stung-all-over experiences have been working ebes at night. As far as Icould tell the hives were mostly poorly constructed and maintained, which is not surprising, but made it even more difficult to do anything useful with them in the dark abyss. After going through about half a dozen hives I declared we'd seen enough even though the young fellow who was working with me seemed ready to keep on going all night.

They have a beautiful field full of beehives (I had some nice pictures on my phone, taken during a daytime visit ....) that they plan to use for training, but if they don't learn to work it during the daytime, what's the point?