Into the Mountains of the Moon 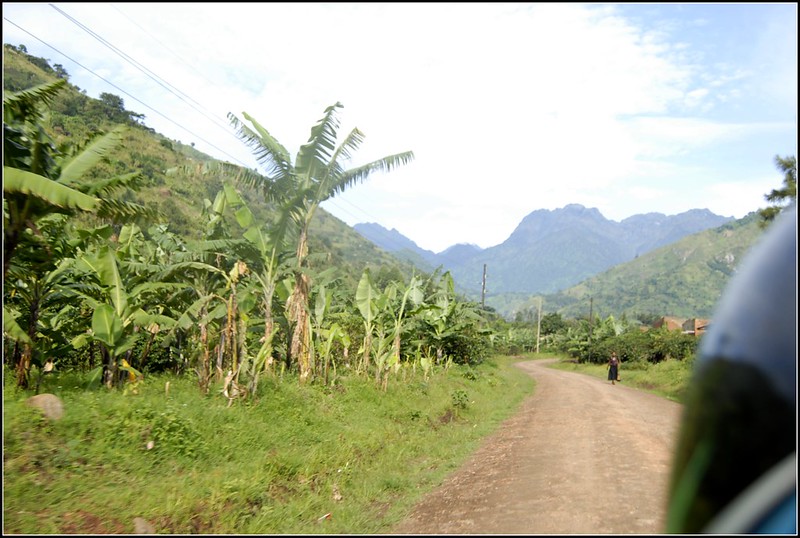 Monday, November 2nd, Day 30, Kasese, Western Uganda - In the early morning light I sped back up the highway, clinging on the back of a motorbike, back up the road we'd traveled the day before and the day before that. We passed a palace, which I'm not sure whether to describe as a "large" palace or a "small" palace, it's all a matter of perspective, but it would equal maybe the kind of impressive edifice a successful doctor in Orange County would live in, which makes it small by world palace standards but large compared to most other things in Uganda, it belonged to a local king. I'm informed at one point (the Idi Amin regime?) the monarchies were all abolished, but much more recently they decided they wanted to bring them back as a point of cultural pride or something, so they rustled up the former kinds or their descendants and re-installed them. I picture them being then engaged in mundane commonplace jobs and suddenly being informed they were being made a king.
After about forty minutes we turned off the main road and took a dirt road up into the mountains, passing plenty of locals carrying firewood on their heads and otherwise going about life. As we wound up the foothills my driver eventually stopped over a rise and pointed out a mountain peak that had just become visible. "See that? thats Mt [my god damn notes are lost], you are very lucky to see it, it is usually shrouded in clouds!!" But there it was, crystal clear in the fresh morning air, topped with snow. Snow, at the equator. We were still within a degree of latitude of the equator, and here was snow. And then we continued up, and up... 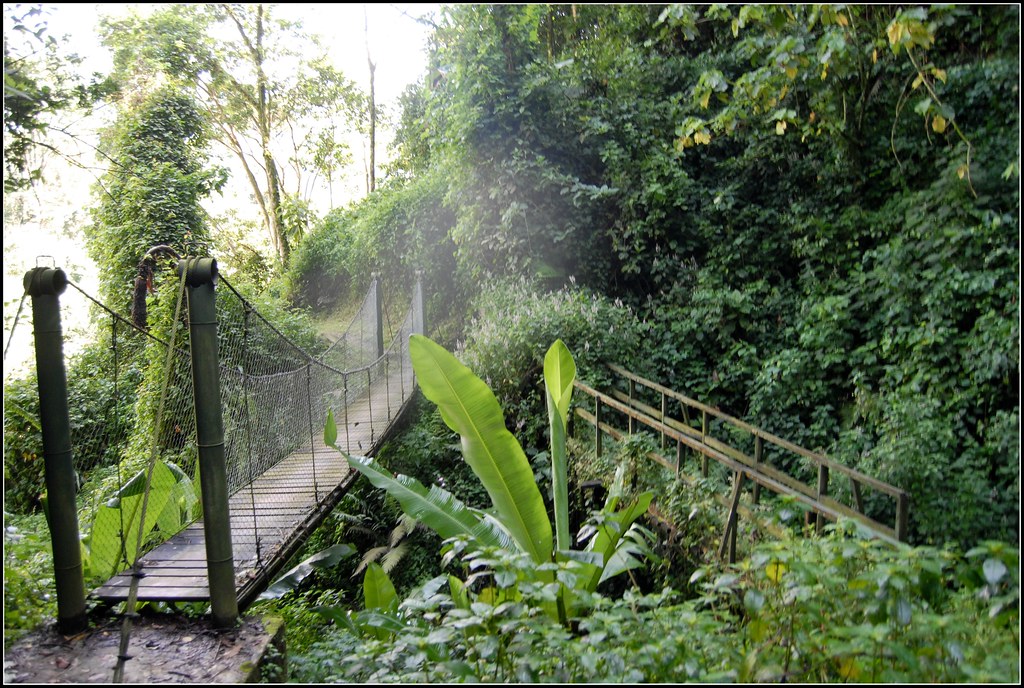 The day before (which was the day after we arrived) we had had some free time in the morning and then some more project site visits in the afternoon. Looking at a keen map of things to do in the area [which I took a picture of... which has been lost. I'm never going to stop complaining about this ;) ], I had noticed a hot spring nearby. Hot springs are always fun, so I was like "let's go here!" not having a better idea anyway.
We drove up into the hills just a little bit until we came to where a local says it was (navigation in Africa generally consists of slowing down by a pedestrian and asking questions), and there it was down a steep path in the little valley full of trees. The hot spring was then full of local men and women. The women, mostly old, were all topless but found things to cover themselves with at my arrival -- which I thought was funny, local men don't matter but the mzungu.. As soon as I arrived two skinny youngish men (30ish?) started about pulling me to the hot spring and once they had me in there proceeded to immediately give me a thorough massage. Now I immediately recognized that they would expect to be paid for this but I decided just to go with it. Despite I suppose being the literal definition of pushy, they weren't actually annoying, and it wasn't even like "here my friend, let us give you a massage!" it was.. they just started doing it. And when it was over they only wanted about $5 which I gladly paid, having feared they'd want something ridiculous like $20 (which I recognize would be ridiculously cheap for a massage in the western world, again, everything is relative). Another local earnestly told me that the healing powers of the hot spring could heal "ANYTHING!" and listed a wide array of potential ailments, though I think he noted it didn't cure aids. (HIV prevalence in Uganda is like 7%, making me very afraid of anyone's bodily fluids!!)
Later that day down in the hotel lobby with the giggly receptionists Sharon and Maggie (who I still swear I'm going to call one of these days to say hi), I had them bring in a tour operator they knew so I could plan a trip up the Rwenzori Mountains, also known as "the mountains of the moon." The guy who came wanted to talk about 7 day hikes and 4 day hikes and I think was a bit like "oh, uh" when I said I just had one day for it. And he kept talking about summitting the mountains though I kept saying look I don't care about that I just want to walk in the forest. The one day hike he finally booked me on, I'd find out later goes past two of the one-day's-hike waypoints for the multiday hikes and was basically the single most strenuous leg of the whole thing. Gee thanks. 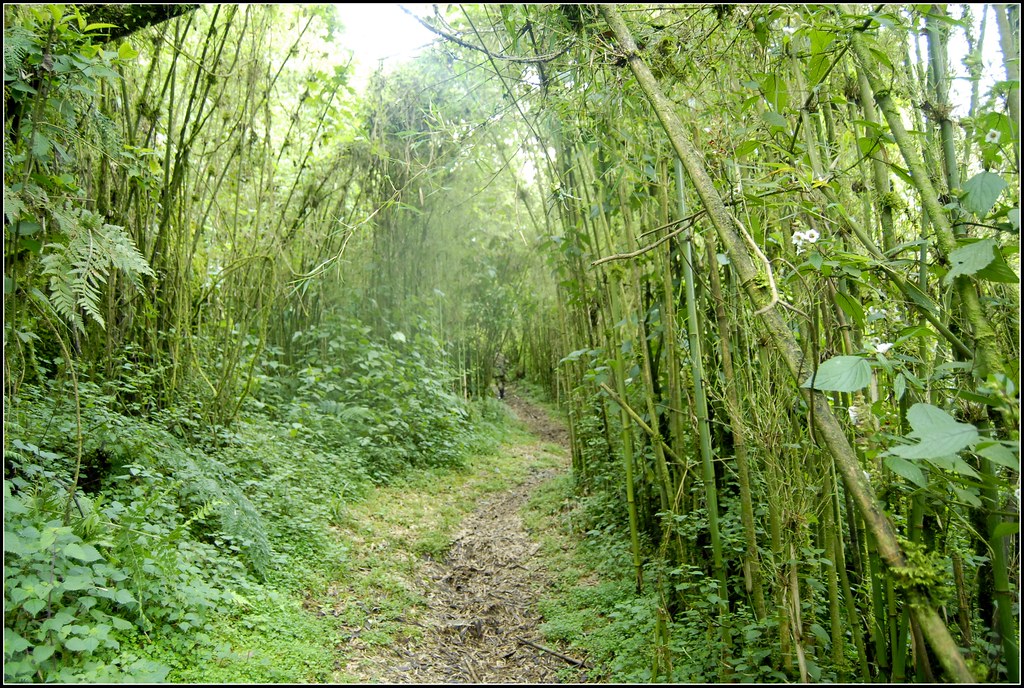 Up in the cloud forest

So the morning of the hike a motorbike took me up to the national park entrance, nestled in the forest by a babbling river. A park ranger checked me in, a young lady in military uniform with a sub-machinegun (the other side of the mountains is Congo...). I've always been impressed by how thoroughly women are integrated into the uniformed forces of all the African countries I've been to.
Presently my guide showed up, a young man also that looked thoroughly a soldier, in camo with an AK-47. I believe his name was Simon or Thomas or something, I don't know, it was in my notes. He was very nice I liked him.
And then we commenced hiking! The trail followed the streaming river for most of the first half of the 8.5 km hike (there and back, 17km total. Or maybe that was miles. It was wicked long whatever it was), and was relatively level for just the first kilometer or so... and then went up at a 30-45% angle it seemed for most of the rest of it! Now I don't exactly work out every day (or ever) but I'm pretty active and consider myself in fairly decent shape ... but soon I was having to stop and rest every ten feet on this absolutely grueling marathon climb. We passed porters bouncing down the trail. Multi day hikes have a bunch of porters to carry their food and stuff and I'd imagine as they eat through their supplies the porters start heading back one by one. They seemed cheerful and eager to get home. Later we'd pass some huge banana palm style leaves on the ground which I'm informed porters sleep under (!). Eventually we climbed out of the river valley and climbed a ridgeline. Got to the shelter where multi-day hikers end their first day. It was a nice little cabin with bunk beds, wood walls and roof. I think it would be quite pleasant to spend the night up there with a group of friends, the porters making you dinner. It would have been nice to be done then and not still have 75% of the days hiking to go!! 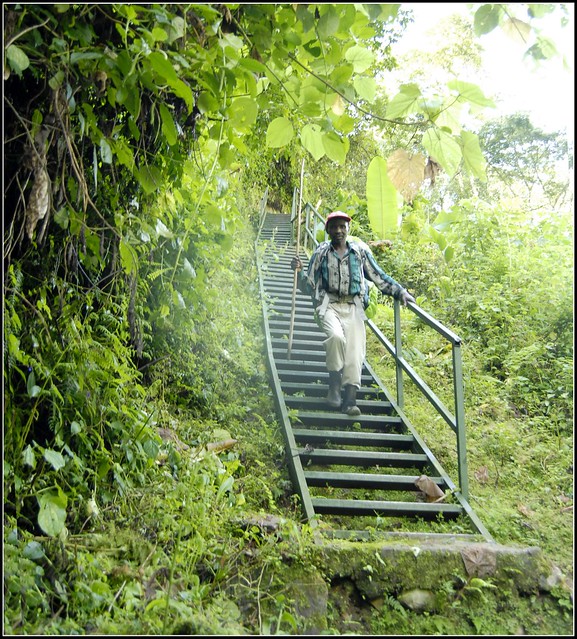 My guide mentioned that we didn't have to go all the way, we could turn around any time I wanted, and I like to think he was a little surprised when I kept on going and going. Shortly after the shelter we started to get into the higher altitude "cloud forest" (we had some impressive altitude gain, I don't know, it was in my notes). I've always liked the "cloud forest" exhibits in zoos, with irrigation tubes blowing out mist among the bamboo, mention of exotic animals, it always seemed so mysterious and exciting ... AND HERE I WAS!! Several times we heard monkeys crashing through the trees but didn't see any until the very end. My guide pointed out an elephant footprint on the ground and I wondered how such a huge animal could possibly navigate these steep mountains. Saw a number of Great Blue Turaco birds and then at one point I found a pretty blue feather lying squarely in the path, which my guide informed me was also from the Great Blue Turaco. I picked it up and it's on my dresser to this day.
By this point, though I was doing decently on any level or downhill part of the trail (we finally weren't climbing so much), even a gentle rise of a foot or two over a raised bit of the trail would make me clench my teeth as my legs burned and my feet felt like lead. Finally, FINALLY, we arrived at the crater lake that was our destination. It was quite beautiful. I took numerous pictures ........ which, I still have some on my DSLR and I'll see if any are good enough to post but remember the lense had gotten dirty, and a lot of my best pictures were from my phone I think (also my phone has a very useful panorama function which I've learned to use a lot for views that are just to expansive for a single shot)
I had been provided with a packed lunch, which consisted of a leg of fried chicken, fries (cold of course), a banana, a box juice, and an apple. My guide didn't seem to have brought anything at all and seemed content like that, but I gave him my fries and some biscuits. 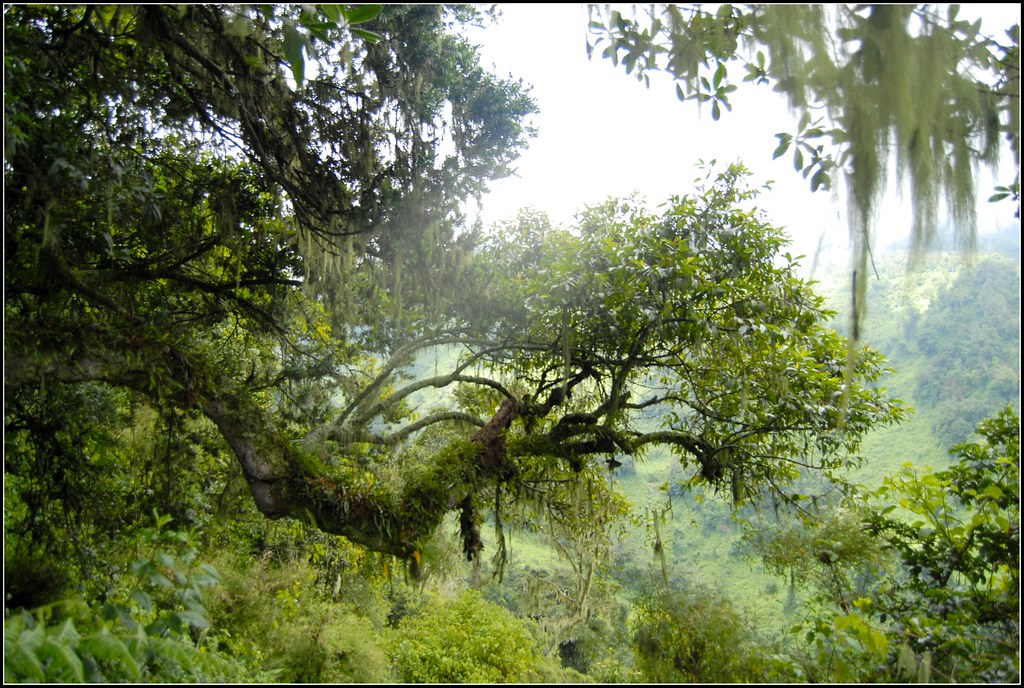 And then it was time to head back! Going downhill, as you may know, is NOT necessarily easier! It can be really hard on your knees!! We also started to become a little concerned it would be dark by the time we got out, as we hurried back along very long journey out of the mountains. By the time we finally arrived at the park entrance, it was no longer manned and the light was in the initial stages of twilight.
The motorbike trip back to the hotel seemed to take forever because I was so exhausted. I remember it was soon dark out and we were drivign along by headlight-light. Happened to catch Maggie just as she was getting off duty at the hotel, we'd talked earlier about going out but I couldn't even begin to conceive of it I was so exhausted. I think it took a week before my legs were no longer burning every time I walked! 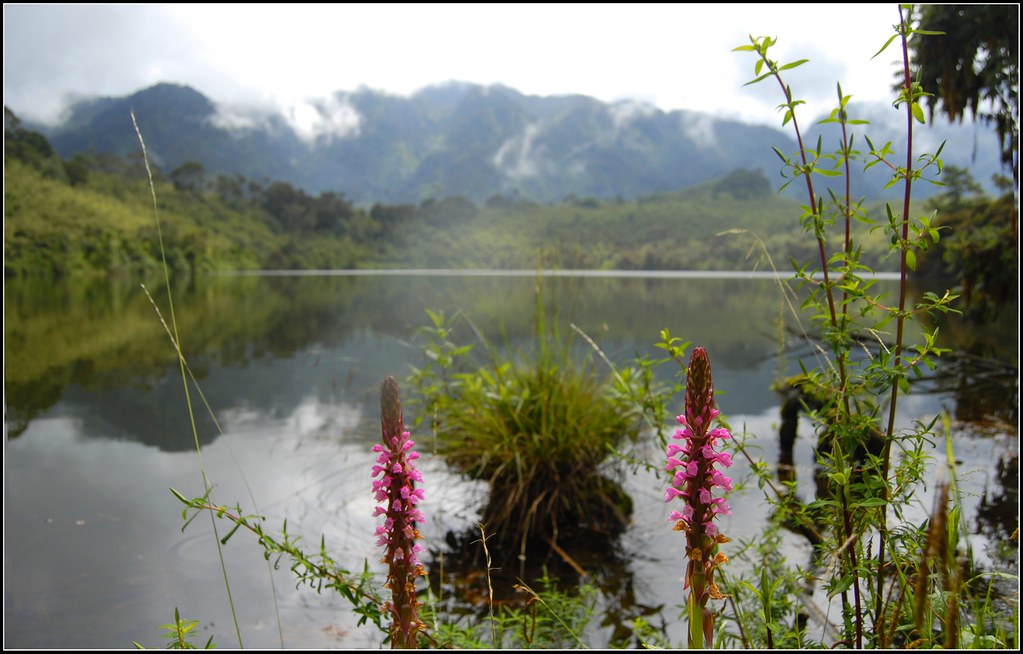 The crater lake I hiked to

[Coming up next time: hippos! several different kinds of kingfishers! What people will do for 14 cents! Guess what food destroys my guts?? And going out on the town with Maggie and Sharon!]