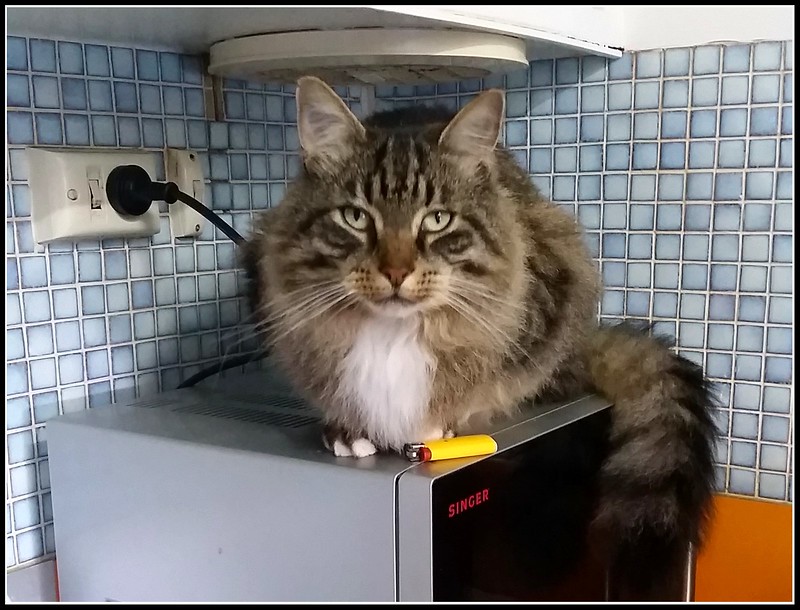 One of the best things about my old place, merely a trailer on the farm, was that it came with a farm cat (well five cats and five dogs but there was one cat in particular that sort of adopted me) ... and the only semi heartbreaking thing about moving out is that I've got to leave the cat behind. Granted I'll still see him at work, but gone are the long evenings of him purring on my lap, or kneading my chest as I try to fall asleep... or wanting to be let out at 4am.
Maybe the following will seem like run-of-the-mill cat things to you but please understand I've always liked cats, BUT have always moved too much to actually _have_ a cat.

The cat is named Cato ("cay-to" like the Roman statesman, not "caht-oh," that would be dumb), but naturally in my constantly addressing him, his name gradually expanded: to Cato Potato, Cato J Potato, Cato J Q Potatoe, and finally, in my mind at least, I've decided his full name must certainly be considered to be Caticus Maximus Augustus Julius Quintus Potatoe. 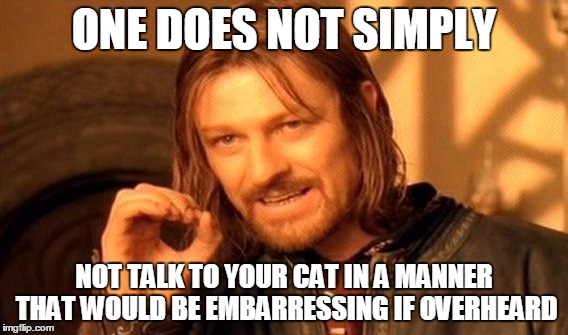 He was an interesting cat, because he could be quite grumpy to the other cats, indeed there's one poor cat he always chases away on sight. He's definitely the alpha cat, but then he is also so loving and sweet to me. Allegedly he was once a feral cat, but he's so well trained -- he's never pooped in my trailer (whereas I let one of the other cats stay in overnight ONCE and it left a steaming cat turd right on my luggage... never again!), and he never uses his claws on me except just a bit maybe when he's kneading on me. He does attack paper towel rolls on sight though, they are his declared enemy apparently.

If he's stayed in overnight he usually wants out around 4, I don't know if it's because he has to go to the bathroom by then or just liked to hunt in the early morning gloaming. He knows I usually emerge just before 8:00 though and is often waiting for me thereout. I never know if it's because he wants in though or he wants to hang out with me. So the other day I opened the sliding door a cat-width for him but then walked ten feet the other way and turend to look at him. He sat there looking at me and then after a minute or two gave me one definitely "Meow!" as if to say "WTF! Are you coming in or not?" So I went to pick him up, and as my hands came around him he stood up, arched his back a bit and about hopped so I could put my hands under him and pick up his adorable furry self.

He likes to ride on my shoulders: 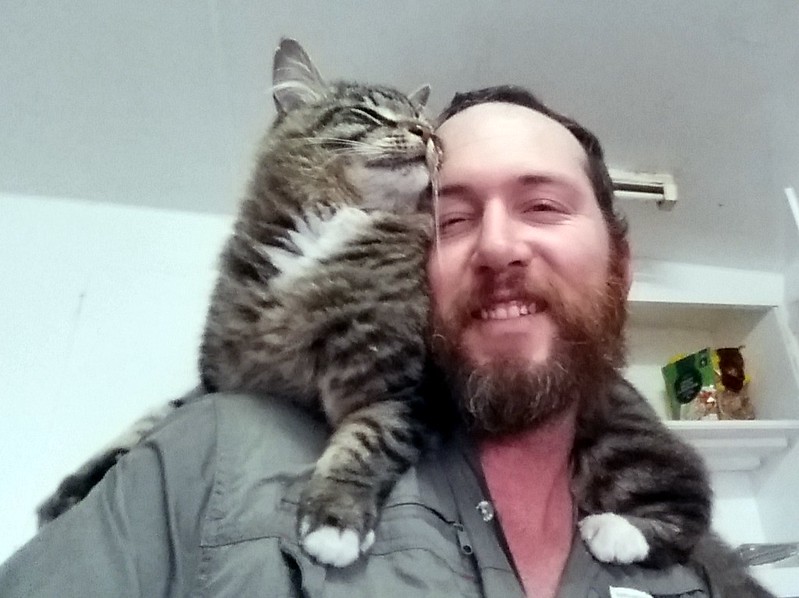 The other day I was heading into town after work. The moment I opened the car door, Cato, whom I hadn't even realized was nearby, jumped into the cab of the truck. It's about 200 meters to the outter farm gate so sometimes I let him ride with me until I get there. By the time I got there he had curled up down in the passenger-side foot-well though. Well I had to scoop him up and eject him but sometimes I wonder if if I took him on a trip he would behave and not run off.

I swear that same evening when I came back after dark I think I saw him in the bushes by the road a little distance down the way I had gone.

And he wasn't waiting for me that time, further reason to think maybe I had seen him down the way looking for me. But often when I stop to open the outter farm gate he comes trotting out of the darkness meowing at me, and I scoop him up and take him into the truck cab with me as I drive into the farm.

Anyway, I've moved off the farm now, and I still see him whenever I'm at work or on the farm, but I'll miss the kind of quality hanging out time I had with him when I lived there ):