By now not only has nearly a year passed, but my daily notes on the Guinea trip were ALSO on the phone that was lost in Nairobi so they're gone! ): So The last two weeks or so are going to be super condensed! I'm going to assume you don't remember my last Guinea entry, because I certainly don't! 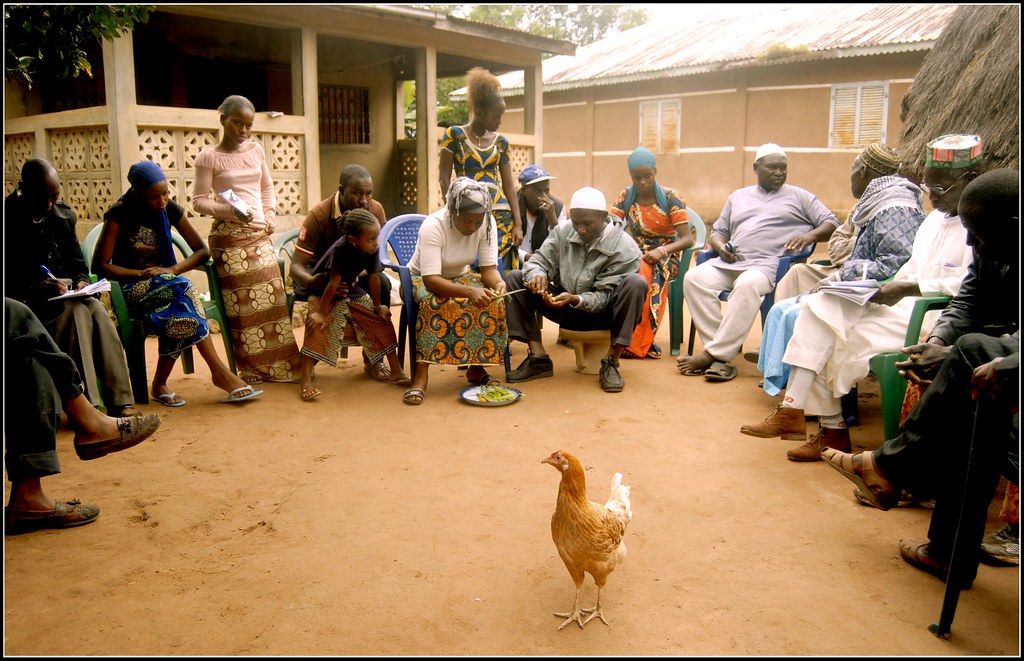 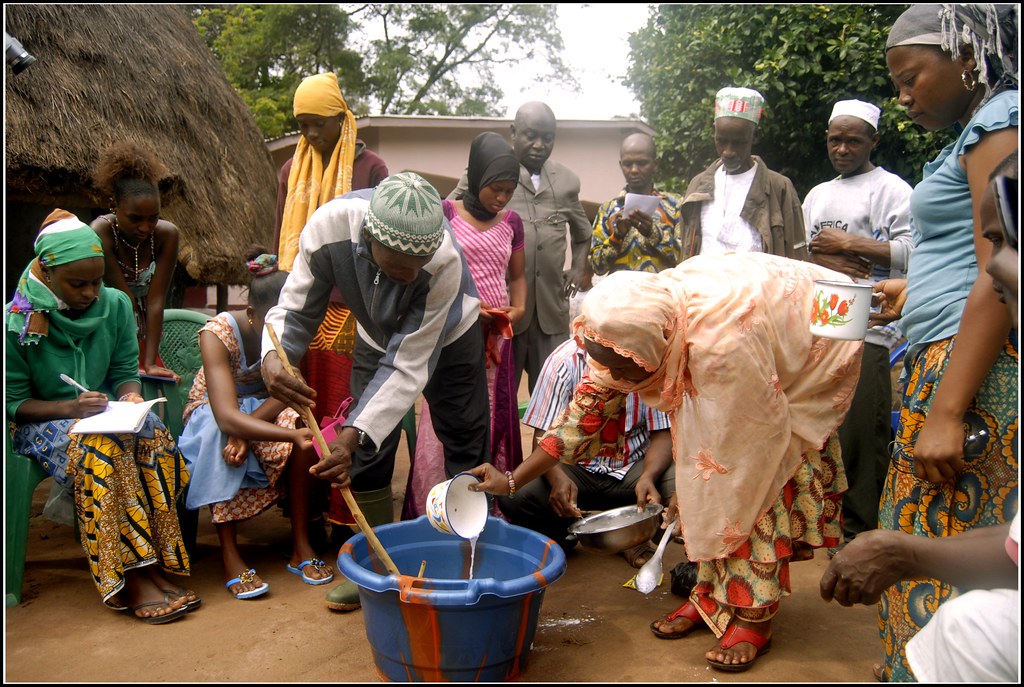 Anyway, then I returned to Conakry. Did that take one day or two? I don't know any more! But it's a long way.

Back in the capitol, Conakry, I was once again there at the same time as Dr Sandra, a pesticide expert. The next morning I'm still loafing in my room in my pajamas when I get a call from the lobby saying my driver was there to pick me up. Uh what? So I quickly get dressed and run down there ... and it is then that they (the guys from The Organization) inform me that we have to go to the Ministry of Agriculture to make a presentation. GEE THANKS FOR THE WARNING!!
THEY had known about this in advance, it's not like it just came up, but somehow didn't think of telling ME about it in advance. Fortunately I have no fear of public speaking so was able to decently wing a presentation to a room full of under-secretaries and heads of branches, two reporters and the local peace corps coordinators -- but I would have really liked to have had a chance to put a power point together, which I could have easily done the night before if I had had warning!
After that we went to another big presentation room for Sandra to give her presentation on how pesticide safety can be improved in Guinea. I found it quite interesting! I often wish I could sit in on more of other volunteer's projects. 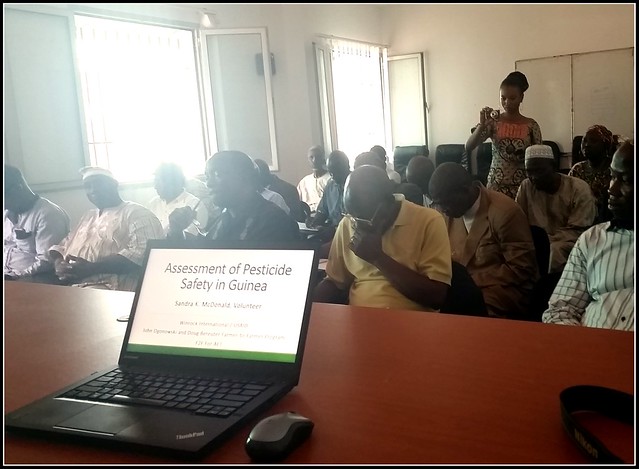 My dear mother had asked me for some of the cloth they make their beautiful clothes with in Guinea so we went looking for clothe, and once I'd indicated to my local colleagues what I wanted we left without buying it, since the sellers obstinantly would _not_ give a decent price seeing a white guy was the buyer, and instead we had Miss Adama, the Organization's secretary, later go back and buy that same fabric for an actual decent price.

That evening The Organization guys took Sandra and I to a restaurant out on a pier called "Obamas" that was actually quite nice ... if you ignored the really alarming amount of trash floating in the water.

Sandra and I were both to be taken to the airport at the same time the next day. At some point I decided I wanted to stop by the craft market on our way to the airport and talking it over with the Assistant Director he agreed to this and I asked if Sandra was on board with this and he said, I believe, sometihng along the lines of "I assume so"
Knowing how terrible they are about communicating I asked Miss Adama again just before tehy came to pick us up if Sandra had been told of the chane in plans and she gave me a similar positive sounding yet not 100% positive answer.
Aaand when they showed up it turns out Sandra had NOT been told we were leaving an hour earlier. It's things like this that I just find shocking -- how can it not occur to you that people involved in plans need to be told of changes of the plans? Especially when someone involved is actively reminding you??

One last funny thing -- on Tinder, the dating app, there was no one in Conakry but a lot of medical professionals in Freetown, Sierra Leone, 80 miles to the south. I chatted with this one girl a handful of times but then I went into the interior and got busy with stuff.
Arriving in Atlanta, Georgia, when I got to passport control and told them where I had come from, the officer promptly put on a surgical mask, gave me a surgical mask to put on, and put in a call for another officer to come over after a few minutes, also wearing a mask, to escort me to the quarantine area. There were about half a dozen of us in the waiting area, and then they took us into a little room to take our temp and stuff. All staff wearing protective clothing. And I realized the little room had a thick door with one way window, stainless steel walls, a cot bolted to the floor ... it was totally the room where they beat you with hoses before disappearing you to a plausibly denied secret CIA prison in Eastern Europe!! Fortunately they didn't do that to me.
But now I mention the girl because when I finally got home to California I had a message from ehr saying "was that you in quarantine with me???" ... so we "met" on tinder while 80 miles apart in Africa, and then two weeks and 3,000 miles later we happened to be quarantined together in Atlanta. Funny!
The morning after my arrival in California there was a knock on my door, it was a county health inspector there to serve me with a formal notice of quarantine. I was free to leave the house and go about my business but would need to notify them if I left the county, and had to report my temperature to the county health inspector twice a day -- to fail to do this would be a misdemeanor.
I asked what would have happened if I came back with a fever like I did last time, and he said they'd have had an ambulance waiting for me at hte airport to take me to the back entrance of the hospital where they would put me under intense quarantine. YIKES!!

Anyway I was officially quarantined for 21 days I believe and on day 22 I was off again to East Africa! And that is another story... which has already been told! 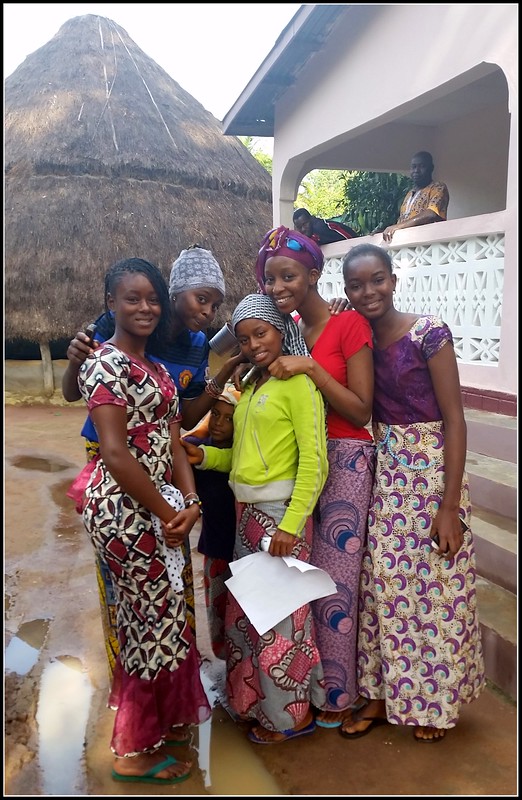 Ismatou, in the blue making a kind of funny face here is getting married around the time I'll be back next month so I'm really hoping I can coordinate it to attned her wedding. Recall I just barely missed a village wedding last year and I was really bummed because it seemed very interesting, so maybe I'll get my chance!


See Also: there's really too many good pictures I'd like to post! See them on flickr! Guinea is such a beautiful place I really want wait to go back!