Monday, July 18th, Labe - Arrived in Lafou about half an hour north of the town of Labe. The highway was really shockingly well made here -- no potholes at all. Apparently its part of a new road that goes from Labe to Senegal and will eventually link all the West African countries together.
We (myself, Mr Damba, our driver Mamadou, the beekeeping association trainer Khalidou) were put up in a guest house on one side of a dirt square across from the tiny little local government hall, which is where the training would take place. There was also electricity this time! The little government building had solar panels and they strung across wires so we had working lights, though we couldn't plug anything in to charge.
Along the highway and around the square there were these big white light poles with solar panels, to light up the streetlights at night. Apparently this charity project called Akon Light Up Africa put them in. Personally I think they're a nice improvement of safety by the main road and I guess prevent people from tripping at night in the village, but I'm not sure where streetlights fall in the pyramid of needs. Still everyone seems excited about it and everything helps. I did miss my starry nights though.

As the people filtered into the little hall that first day I noticed a mzungu, or as they call us in Guinea apparently, a porto -- a white person. She was, it turns out, a Peace Corps volunteer. She was working on a beekeeping project so she came to attend the training, which she had heard about the previous years' projects. She was really nice and it gave me someone else to speak with, since Damba usually couldn't be bothered to translate anything conversational for me. Monica, AKA "Umu Bah," wrote a blog entry herself about the training. I'm not going to write too much about the nuts and bolts of the training because that's the same as it always is, so you can read her entry for a fresh look at that (:

For me, having a Peace Corps volunteer there was itself one of the most interesting things. I have an interesting relationship with Peace Corps, having been thinking about doing it on and off ever since college and at one point had almost gone. And there are lots of informational sessions where you can talk to returned PC volunteers in the states if you are interested, but that's nothing like spending two weeks with one in the field to really see what it's like. I greatly enjoyed discussing various development problems and projects with her. 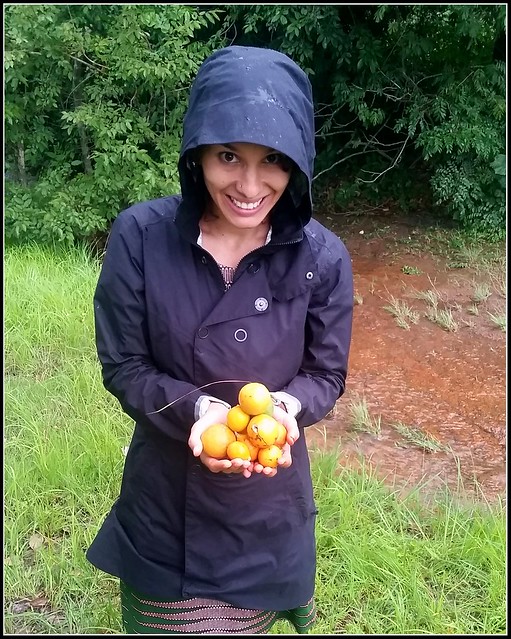 In the evenings a local man named Abdul would take Monica and I walking around, in a different direction each day, and I greatly enjoyed this, since I always love to explore the area. While the part of the village where we were staying was more open, other parts of the village were much more like Doumba had been last year, that is, houses and huts connected by veritable tunnels through thick maize, lots of tree cover, generally green and lush.
One of the days, Abdul led us up a mountain trail, pointing out various herbs along the way and telling us the local beliefs about their medicinal values. Just when I thought we were really far from anywhere, up the mountain, we suddenly came to another little village, where he said his sister lived. Greeted his sister and her family and came back through thick rain.
We got a fair bit of rain in general, and one whole day was lost because it was raining too hard to do anything, but even when it was raining I was revelling in the fact that it was SO MUCH WARMER than Victoria, Australia, which has been within ten degrees of freezing all winter. As always, many hours were spent sitting on the veranda, reading as it rained.
Since Mr Damba only really seemed interested in translating for me when it suited his purposes and/or translating what he wanted to communicate, I found myself increasingly using Monica to go around him to communicate directly with the FAPI (beekeeping association) president and FAPI trainer Khalidou. When someone annoys me I tend to tell myself I'm just being grumpy and it's not that bad but after awhile I realized its kind of ridiculous that I was having to go to all this effort to go around my own interpreter (so he wouldn't intervene I'd often be trying to get a chance to talk to Monica without him around about what I wanted to communicate to the other participants!
Things really came to a head at the end of the week -- I had talked my friend Daniel from Ethiopia into coming to Guinea for the project. He is a honey exporter in Ethiopia, and even if they found another exporter in the United States, no one would have as pertinent experience as Daniel does from exporting from a similarly undeveloped African country to Europe. So Daniel had volunteered to come which I am very grateful for and I paid for his flight from Ethiopia. He was arriving in the nearby town, Labe, on Monday. All week I'd tried to bring up the plans with Damba and he kept brushing me off with "we'll deal with that later." So finally on Friday I sat down with him and said
"okay we need to go in to Labe on Monday to pick up Daniel," to which he said
"No we're going to Labe on Wednesday it's in the itinerary"
"Yes but Daniel is there on Monday and we need to go get him." I said
To this Damba went into the other room and came back to show me the printed itinerary, saying "no see it's on Wednesday"
"I don't care if it's in the itinerary!" I exclaimed, "my friend will be there Monday and I'm not going to leave him twiddling his fingers there for three days"
Damba was completely unmoved, saying we couldn't change the itinerary. Which, I've seen all kinds of wild deviations from the itinerary. We had days off and trips to Labe that weren't in the itinerary already, I really don't know why he was being like this.
"Okay well I'll email Ibro then and ask about it" I offered, since Ibro, the country director for the Organization, surely had the authority to change the god damn holy text of the itinerary. Ibro called him an hour later and I don't know what he said but Damba seemed a bit better behaved.


Monday, July 27th, Labe - On Monday we headed back in to Labe to pick up Daniel, and Ibro who had actually come up with him. At breakfast that morning in the hotel in Labe there was the Justince Minister, the governor of Labe region, and the mayor of Labe. Place to be apparently!
Returned to the village of Lafou for one more day of wrapping things up with the participants and "closing ceremonies." Lots of speeches ensued. I gave a boomerang decorated with aboriginal art to Abdul as thanks for taking us walking every day. I'm not sure he knew what it was or what the kangaroo on it was but he seemed very touched.

Wednesday, July 29th, Labe - On Wednesday we had a meeting with the board of FAPI and Daniel presented about how to meet the import requirements for the EU and it was very good and informative and I myself learned a lot. I had really wondered many times if it was worth the stress and cost and effort to bring Daniel here but after this I was satisfied I had done the right thing. His contributions were very valuable and I'm very happy to have fostered pan-African exchange.
For lunch that day we went to Sanpiring, the little village just outside Labe where I had my first Guinea project in 2014. There I was shocked to learn this young girl of about sixteen I knew (she's the one who was declared my wife after she cried for two weeks after I left the first time) had been married and gone off to live with her husband. You hear about these young marriages but it's truly shocking when it happens to someone you actually knew. She was so young! I was really quite shocked. At least her husband looked young too, not some old creeper.

And the next day we would return to Conakry! Usually its mostly a straight shot but it actually turned into a rather interesting 14 hour road trip complete with being waylaid by drunk soldiers. But that's definitely another entry! (: 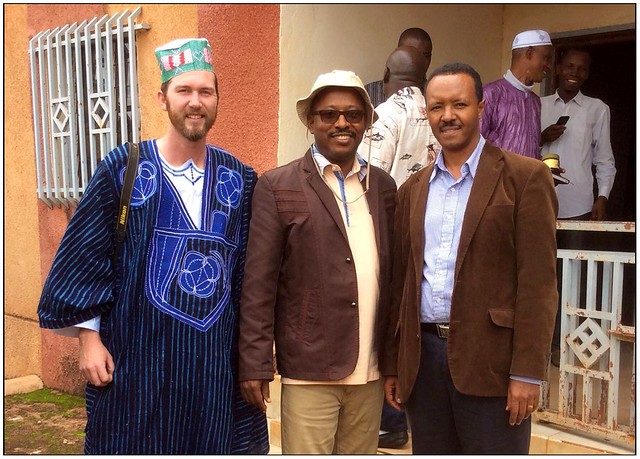