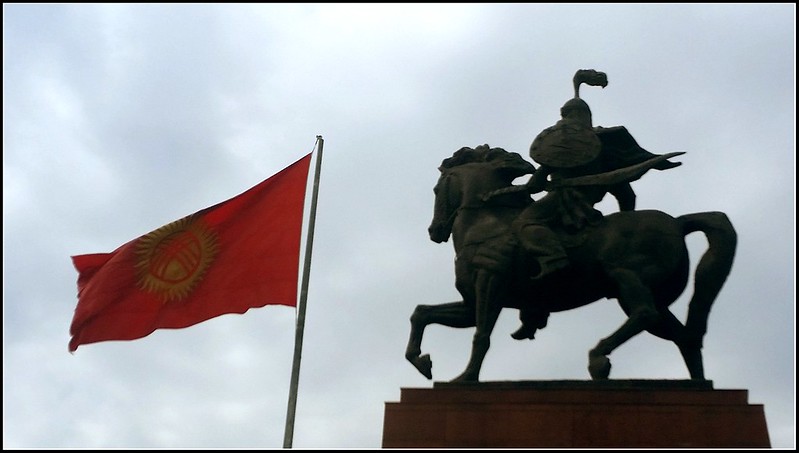 March 29th, 2016, "Manas," 02:00 - It's two A.M. when we shuffle off the small airplane, through the cold night air and into small airport terminal. The sign says "Welcome to Manas." Manas? Where is Manas? What am I doing in Manas. No one seems to speak English, there aren't any signs. We're all being disembarked but I have no idea what I'm doing here or where to go. The security guards wear vaguely soviet olive green uniforms with peaked visor-caps, and have a stony unhelpful set expression on their weathered asian faces. I wander the (very) small transfer section of the airport but determine there are no outgoing flights any time in the near future. The signs are all written in cyrillic, though having studied Russian long ago in college I remember just enough to decipher cyrillic into the latin alphabet. I decide to follow all the other passengers even though it looks like they're going out to the baggage claim where I might not be able to get back in.

I've already been most of the way around the world and in transit for 44.5 hours by this point. Having begun in Melbourne a full day before (evening of the 27th), I flew to Canton, China, and from thence to Paris, France (passing my final destination roughly halfway)(arriving in the morning of the 28th), then to Istanbul, Turkey (where I was for several hours of the afternoon of the 28th), and finally, this final leg to Kyrgyzstan in the very center of the Asian continent.

I found my bag on the baggage claim conveyor and stumbled past security to the outer lobby, still thoroughly confused. Leaning rogueishly against a pillar smokign a cigarette was a shifty looking fellow with a sign with my name on it.. so I guess this was the right place after all. Shortly I was able to put together than though the destination I was expecting was "Bishkek, Kyrgyzstan," the airport which serves the city is "Manas" airport a fair bit out of town. I had misapprehended Manas to be a different city entirely.

The driver led me cavalierly to his waiting car and didn't offer to assist me putting my bag in the back. I had never thought hard about it before but when one picks someone up at the airport it's always seemed like what you do. The driver spoke pretty good English, but I wasn't feeling terribly talkative being as it was the middle of the night and I was still feeling pretty bamboozled after spending a full day in air travel across half the Earth's time zones and back again. Curiosity did keep me awake during the drive though I noted a long tree lined road through countryside, with occasional giant Soviet-esque monuments materializing after the slowly brightened day. After about half an hour we got into the city, which consisted of big crumbling aparment blocks, broad streets empty during the night, and more Soviet cubist monuments. 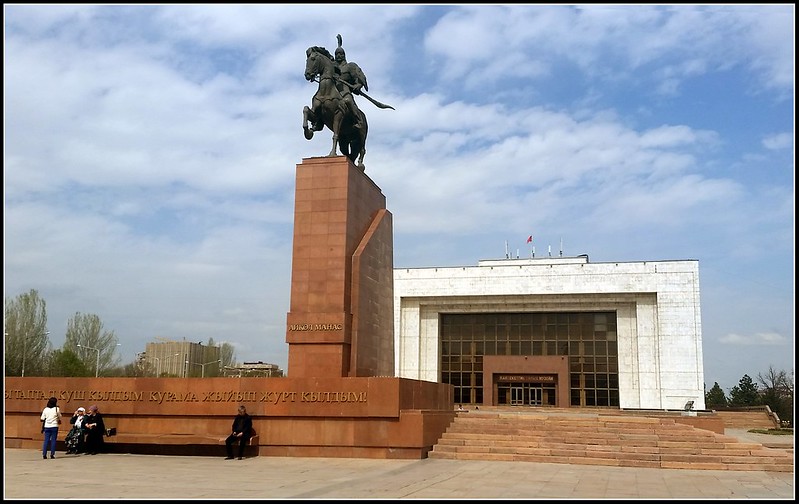 We finally arrived at the little hotel I would be staying in, and, after not helping me with my bags, he said "see you at ten."
"What? like in five hours?" I said with not a little bit of horror at the fact that I'd clearly not be nearly caught up with sleep by then.
"Oh, no, not this morning, the next day." He corrected me. Oh thank god.

The hotel was small but clean, about three stories tall with maybe twenty rooms. My room was actually quite large and nice. In the morning I decided to walk downtown. I was actually more fearful than I usually am in Africa, since someone had told "oh everyone I know who's been to Kyrgyzstan has been mugged" ... and everyone else I talked to who had been to Kyrgazstan.. had been mugged. But the school children who skipped past me in the brisk morning air showed little interest in doing so. I was in a quieter area of smaller buildings across the railway tracks from downtown proper, which I made my way toward. My general observations about Kyrgyzstan can be summarized as that it's a country of Asian looking people, with a Turkish culture, a Russian alphabet and Soviet political history, and a tendency to wear really unusual looking hats.

I made my way to the national museum (pictured above), but it was closed. So I headed to another museum marked on the map I had found but it was closed too. I also found that nowhere would exchange my Australian dollars and I couldn't find an ATM anywhere. I had initially assumed I would inevitably pass an ATM from which I could get local currency but after crossing several of the main city blocks downtown in search of an open museum and not seeing heads or tails of an ATM I began to get desperate and looked up banks on my phone and headed to them and yet they still didn't have ATMs.
I did however find a lovely sculpture park. Many of the sculptures looked like broken pieces salvaged from something larger but I wasn't sure if they actually were or had been made that way as a stylistic thing. I particularly liked this one I call "World's Saddest Rhinoceros" -- 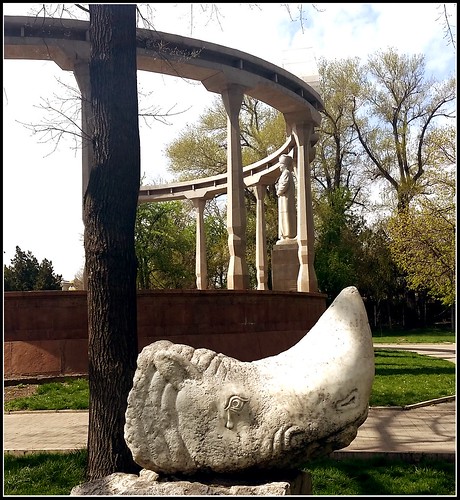 On the way back I found an ATM, and then stopped in to a Turkish restaurant (all restaurants appeared to be Turkish restaurants). They didn't have a menu in English but fortunately I happen to know the turkish words for many Turkish dishes, which I could read even though they were written in cyrillic, so through a filter of two languages I barely understand I was able to glean menu information.

In the afternoon the Organization's country director came to meet with me at my hotel. She explained briefly the plan (I'd be flying to the regional town of Osh the next morning, where I'd meet the local staffperson down there and my translator and then head out into the countryside for the project site.

Due to the previously mentioned tales of getting mugged in Kyrgyzstan (though to be fair I think it's possible even these people who had previously been in the area may have confused Kyrgyzstan and Kazakhstan?) I declined to venture out at after dark, even though I ended up a bit hungry -- showing up in the hotel dining room for dinner I learned I was supposed to put an order in an hour before I planned to eat and it was too late by then.

And to be continued, wherein I travel to Osh, an ancient city on the ancient Silk Road, I travel out into the remote countryside and things immediately begin to go awry! 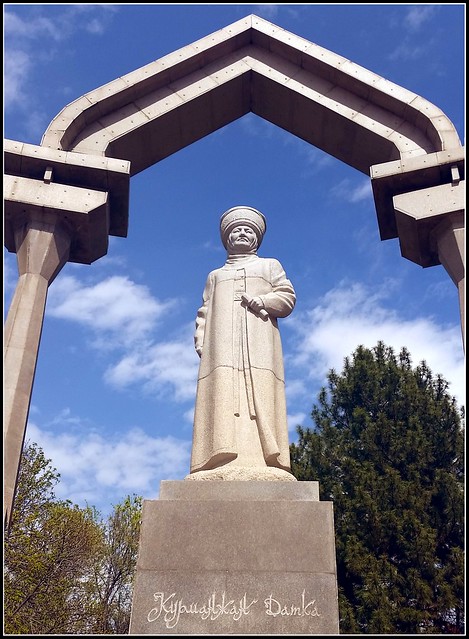 And here's a statue of Kurmanjan Datka, as it clearly says in the pedestal.


And here, watch a pretty promotional video for Tourism Kyrgyzstan