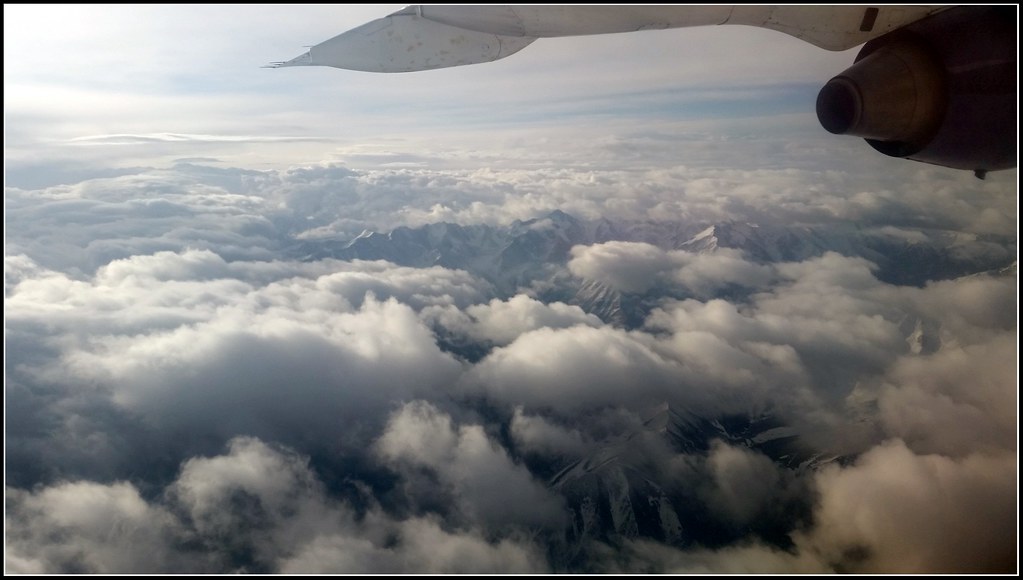 March 29th, 2016, above the Tien Shan Mountains -Bishkek, the capital of Kyrgyzstan lies amid flat agricultural plains, but even from the the urban canyons you can see the white serrated wall of mountains to the south. Taking off, one sees the city is an urban island in a sea of patchwork fields, to the north it stretches north to Kazahkstan and the endless steppes, but only minutes after takeoff, after the plane swings around the south, you see the white mountains rushing towards you like a breaking wave. The flight south to Osh was only an hour or two, and I think I spent the whole time with my face plastered to the window in amazement at the snowy peaks so close below me, jaggedly rising from shrouds of cloud. And then just as suddenly, one swings into another broad agricultural valley, though this one you can see the mountains on the other side. I see the town of Jalal-abad nestled on the edge of the mountains (having studied a map before the flight I'm able to identify it), and the river Kara Darya snaking through the middle of the Fergana Valley. One thing I'm not able to see before we land there is our actual destination, the city of Osh, since it's dead ahead and we don't maneuver in a manner that ever brings it into my sight

Note Bishkek near the top, and Osh on the southern edge of the big bite that's taken out of the country on the western side by Uzbekistan.

You may note from the above map that through some quirk of political history, all of the Fergana Valley belongs to Uzbekistan, while Kyrgyzstan is mostly mountains. Jalal-abad and Osh are on the edge of an agriculturally rich valley but must instead look back into the narrow valleys among the mountains to find compatriots. Also note there is no major road between Bishkek and Osh. During winter heavy snows, avalanches or landslides might close off what roads there are between the capitol and this southern region. For this reason Osh acts as a secondary capitol for the area.
Descending the stairs into the brisk early spring mid-morning, the first thing that caught my attention was several glossy SUVs on the tarmac just beside the aircraft, with a number of officers in their soviet-esque olive green uniforms and peaked hats shaking hands with an important officer and his entourage who had just disembarked the plane. On one edge of the airfield there seemed to be a disproportionately large number of military transport aircraft, but as they were packed so close together they clearly weren't in regular use, I wondered idly if in the chaos of the breakup of the soviet union a disproportionate chunk of the transport fleet just happened to be abandoned here. I wanted to take a picture ... but taking pictures of military things is a rookie tourist mistake and grade A way to end up in military custody for a few hours.

The airport terminal was small and I was quickly through it and out the other side. I hadn't been sure of the gender of the Organization's Osh staffmember, since all I knew was that their name was Guljamal. It turned out to be a middle aged woman with her six year old daughter (precocious, adorable with her dark hair in two little buns, and impressively decent in basic English when finally coaxed into saying something by her mom) in company, in an SUV, classic soccer mom style.
We wound through Osh on our way straight out of town. I would like to say I could see something ancient about it at this time but its history wasn't terribly much in evidence between the airport and the edge of town. Mostly what I saw I'd characterize as "crumbling post soviet." But somewhere under or behind the rigorous utilitarianism of the 20th century I strongly suspected a lot of history was hiding. Osh, you see, was a noted location on the ancient Silk Road. It's about the mid-point of the famed trade route, and if you were coming from the West it would be the last stop before traversing the rugged Tian Shan mountains to cross over into China. The city is believed to be about 3000 years old.

As one leaves town one passes under a great arch accompanied by yet another giant statue of the folk hero Manas. This one, as many of them do, has him accompanied by what I like to refer to as "his cat," but this makes locals laugh as they point out its a tiger (but I don't think the statue was too dissimilar from my Cato...) 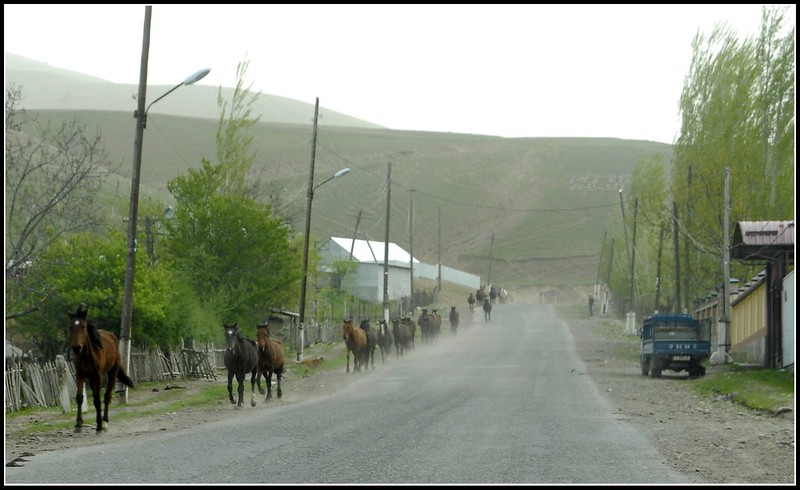 Soon we were winding through the undulating foothills on the two lane country highway. The passing hills were green with grass and frequently ornamented with shepherds on horseback tending herds of sheep, and occasional herds of horses. We passed quickly through a few small towns, in which beat up hyundai light trucks unloaded agricultural supplies beside tethered horses, and weathered looking men in jackets went about their business wearing the distinctive tall white kalpak hats.
After about 45 minutes we came to the slightly larger town of Kurshab and picked up my interpreter. She turned out to be a young woman (I noted that the Organization had managed to have entirely female staff other than that unpleasant driver. Good on them om a country where gender roles are a bit more firmly rooted than in much of the west) named Nurzat. My first impression was that she seemed very anxious to do a good job -- I think it may have been her first gig as an interpreter?
After Kurshab we turned up the narrow valley the Kara Darya river comes from and headed up into the mountains, eventually crossing the river and going up into the mountains and (after passing a random rocket shaped monument. Those Soviets and their monuments I tell you) we suddenly came upon the broad vista of another valley. We descended into this one and followed the road (by now only a dirt road) downriver a bit to the village of Kenesh.

Other than the tin roofs, it could have been a medieval village -- the houses all had rudimentary fences around them and contained cows, chickens, and garden plots. It being early spring many trees were still bare but a number of cherry trees were resplendent in explosions of blossoms. I met my host, a jovial seeming largish older man whom I gathered was a sort of village magnate, and his wife and nephew, a twenty-ish young fellow who helped on the farm. Guljamal and her daughter bid us good by and drove back to Osh, Nursat and I got situated in rooms in the house (I noted the walls were well-nigh two-feet thick!), and were shown around the village. I was very excited to have an opportunity to ride their horse, which they probably thought was funny since to them a horse is a basic form of transportation. 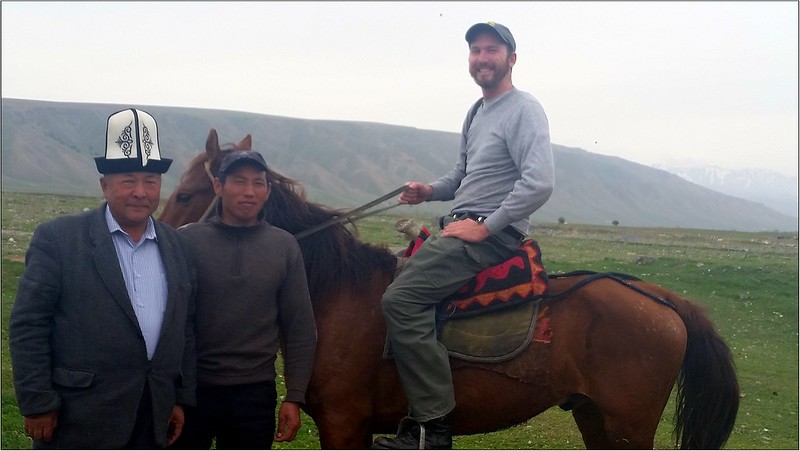 The temperature was ... quite brisk. I had planned on acquiring a jacket locally (another tourism pro-tip: often if going somewhere cold it may be more practical to acquire a jacket locally than lug it all the way there), and fortunately they had one to loan me.
For dinner we had a dish called "Osh" (yes like the city of its same name), which was basically pilaf (ie long grain rice) with grilled onions and things in it as well as bite sized chunks of beef. I found it quite good... though as we proceeded to have it every day for the entire project I did start to long for a little variety. It was served on one big plate and we all had at it with our own spoons. The table was also set with an abundance of homemade jams and things, which were quite delicious.


March 30th, 2016, Kenesh Village, Osh Oblast - The next morning I was anxious to get started with the project, but the host's son, a banker from Osh, had arrived and quite insisted on taking me fishing in the river first thing. The river was cold and muddy, no doubt being snowmelt from the mountains. Only the host's niece (sort of a slightly younger clone of Guljamal's daughter -- Maybe all young Kyrgyz girls are adorable and precocious) caught anything (and that tiny), but it was pleasant down by the river, away from the village, just the vast emptiness of the mountain valley all around and the looming white mountains up at the valley's head.

Finally that aftenoon I was able to wrangle the host to get the participants together, the beekeepers I would be working with to impart any useful technical expertise I could. Usually 30-60 participants are involved in a project. So imagine my surprise when my host presents me... his son and nephew. I had just travelled for days, halfway around the world, to teach the village magnate's banker son and nephew beekeeping. Cue blank expression.
Ah well, all you can do is make hte most of it, let's open up those beehives!
...
All the beehives, which I'd seen full of activity on arrival, are now dead. It would appear that they perhaps were embarrassed by the number of parasitic varroa mites on their bees and/or simply wanted to make it look like there were a minimum of them, so they had treated them with a miticide just the other day (while distracting me with horseback riding or fishing?) ... and had overdosed and killed all their bees.
So now I have only two trainees who only seem at best hobbyists anyway, and no bees. Cue very blank expression.

Now there's two organizations that I've done these projects with, which I'm not going to name since I already caused an international incident by complaining about this one once before, but the other one I've never had any complaints about. This one however, the other project I did with them I felt was completely unnecessary, myself and the other technical experts were in Egypt working with Egyptian enterprises that we all agreed were "as advanced or moreso as comparative enterprises in the States," and we felt like it was just a money sink. So on finding out that this project was also a poorly conceived nepotistic exercise in amusing a village chief had me really thinking "This organization... this organization..."

TO BE CONTINUED: Will it be salvaged, or will I spend two weeks fishing from horseback in a remote mountain valley?? Will Nurzat find professional satisfaction? Will I get a keen hat?? TUNE IN NEXT WEEK TO FIND OUT! 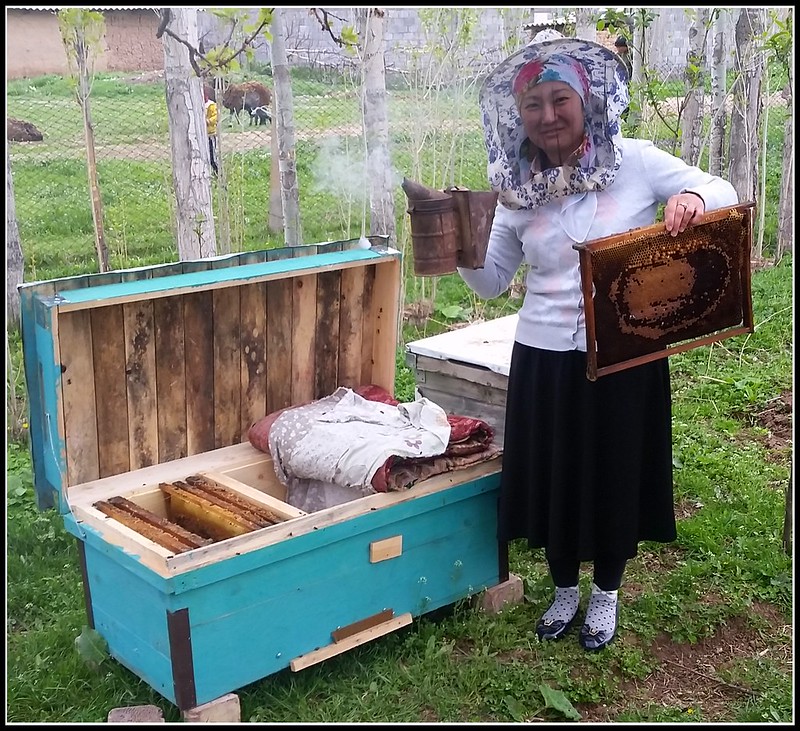