Where the Beekeepers Are 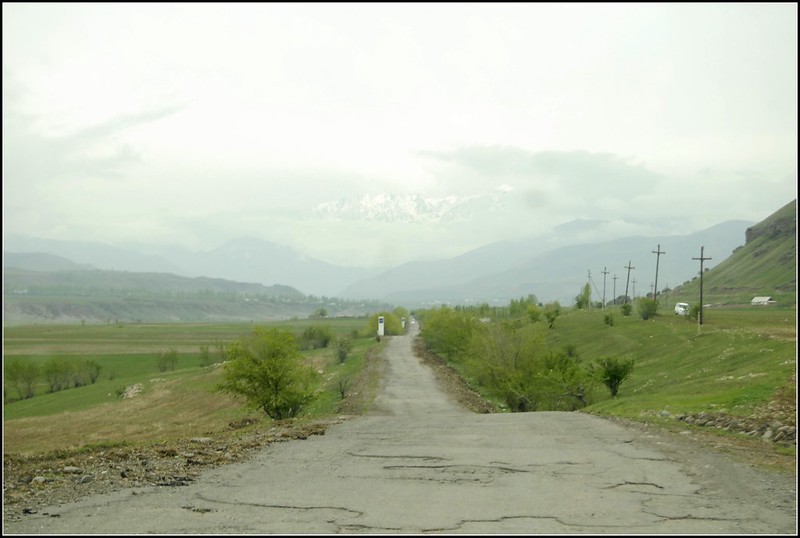 April 1st, 2016, Kurshab, Kyrgyzstan, Central Asia - We drove back up the remote river valley away from Kenesh village. I was sad to see it go, it was a cute village. I had literally no idea where I would end up next. Maybe another cute mountain village? Or maybe I'd be stuck in a decrepit hotel in the city of Osh for the next two weeks. We followed the road up the valley a little ways, once again seeing many herdsmen on horseback, and occasionally having to stop for sheep traffic, crossed the river on the upstream bridge and then the road took us up the steep valley sides to the top, where we stopped for some photographs, as I posed with the family on the valley rim, wearing my felt kalpak hat. 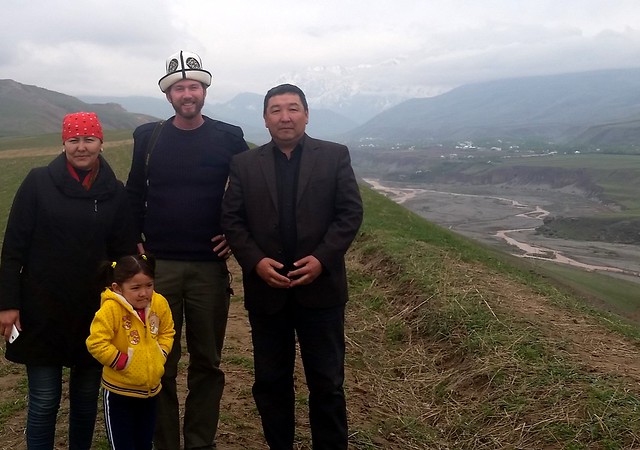 Nurzat, my translator, took the above picture, then I took one with her in it.

We continued over hill and dale through the foothills of the Mountains of Heaven for two or three hours until we passed through the town of Kurshab. There our ride (who remember was the village chief's son, a banker in Osh), dropped us off at Nurzat's in-law's house before continuing on to Osh.

Kurshab is a much more "suburban" town than Kenesh was. Not in a track housing and stucco kind of way but it does seem to consist mainly of houses with smaller yards, not the series of self sufficient farms Kenesh was. It still has plentiful tree cover though, I feel like I rememeber constantly being under tree canopy in town. Downtown there was a small Soviet monument with some tanks proudly perched on pedestals like lion statues. Across the street from Nurzat's house was the ruins of a completely overgrown stone building with elegant arches, she said it was a former bathhouse. Another of the neighboring lots was a large overgrown lot of a large half constructed building that was seemingly never completed. Now horses graze in the lot.

The single most surprising thing to me though was the house Nurzat and her in-laws live in. I was entirely unprepared for it to be so big! Three stories tall! Shiny and new looking! And, in a very adorably typical Kyrgyz fashion, there was also a "yurta" just beside it. The linked picture is someone else's yurta since I didn't get a good picture of theirs, but the design is always basically the same. Theirs had a nice carpet inside, as well as a table, a few odds and ends, and if I recall correctly two rusty old swords.
Nurzat's father-in-law was the principal of the local high school I believe, and was well traveled. I forget what the mother in law did but she seemed very sharp as well. Her husband himself was a rather slight young man whom I got along with very well. He could haltingly communicate to me in English when Nurzat wasn't about to translate. They were a cute couple.
That evening they asked if I'd like to take a hot shower and I eagerly said yes, having had no bathing options in the cold village for the past few days. After a bit they said the water was ready and I discovered the hot water was literally being heated over a wood fire!!
They had a nice little guest room even for me, with among other things a traditional sort of lute sitting on the dresser.

But still though I woke up the next morning, thinking well this is all very pleasant, but what will it entail. We've gone from where we had been lead to believe the beekeepers were to where we hoped beekeepers would be, but would they be??


And I don't know how Nurzat accomplished it, considering I don't believe she had an in in the local beekeeping community, but somehow, she delivered. The next several days were filled with visiting beekeeper after beekeeper! Many of whom just lived blocks away, in the middle of town having a hundred hives closely packed in their yard. 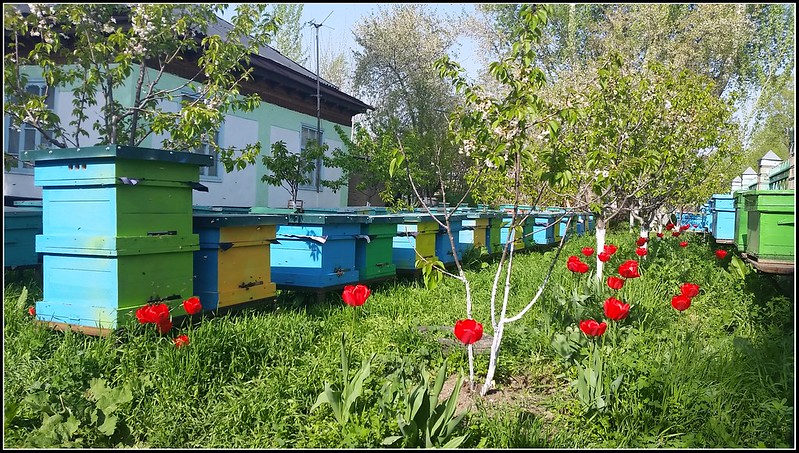 I was envious that apparently 100 hives is enough to support oneself in a comfortable middle class life in town with a house and family there... you couldn't dream of doing that with 100 hives in the West! My visits with beekeepers also confirmed that beekeepers tend to be really smart people who dabble in many things. Many of them had experimental hive designs or side projects. One guy was also a physics and math professor at a local school, and had build the most adorable-yet-utilitarian hive trailer, with sixty hives on each side, and an extractor, two bunks, and work bench inside: 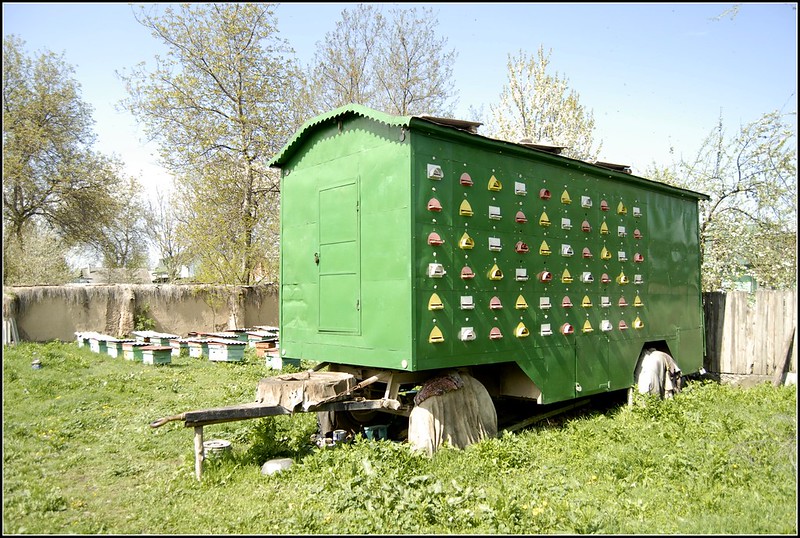 Most beekeepers said they take their hives up to the tops of the foothills in spring for the plentiful wildflowers up there. Several were even engaged in queen breeding which is among the most advanced beekeeping one can get up to.

One beekeeper, when asked about his other hobbies, listed "hunting wolves" as a hobby. As I stood by a thatched shed and a wobbly home made ladder led up to a hayloft (and I watched a chicken hop up the ladder rung by rung to get to the loft!), I swear I could have been teleported back to medieval Europe. Wolf hunting! 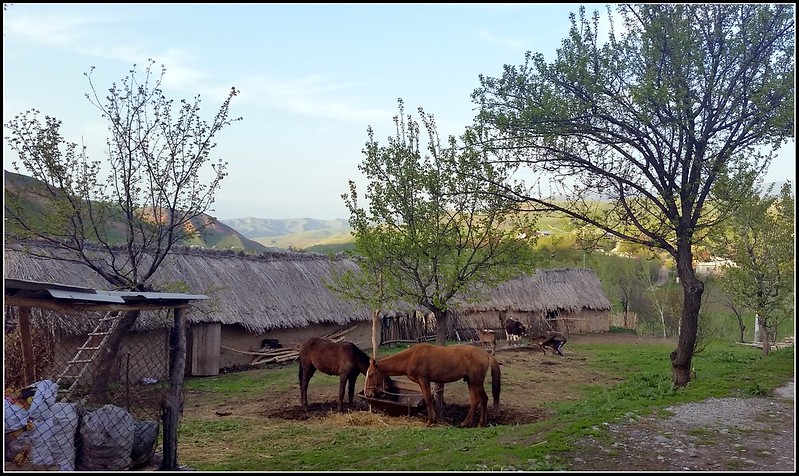 Another fun cultural occurrence was the evening Nurzat's family made "Kyrgyz chocolate." The boiled up some sort of beans in the large cauldron you see pictured above and stirred it for hours. I took a turn myself at stirring it. It resulted in a brown pudding-like substance that was admittedly kind of like chocolate. Kind of. 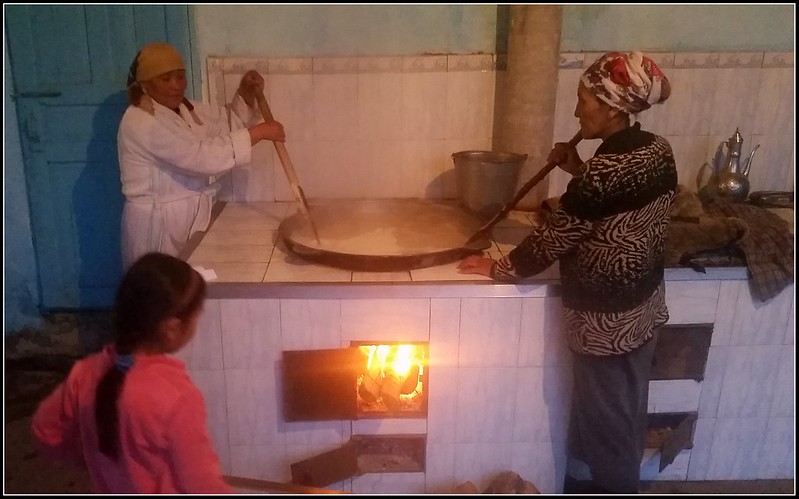 After what turned out to be a very productive week of meeting beekeepers in the area it was time to go home! Nurzat, her husband and I returned to Osh, and I was finally able to spend a day seeing the sights of this ancient city. We were joined by several of her students, she teaches an English class, young men who were eager to practice their English with me. I was surprised by how many of them had their heart set on getting a job in and moving to ... Dubai.
We climbed the rocky landmark known as Sulayman Mountain, reputed to be the "Stone Tower," ancient writers reference as the midpoint of the silk road, and also revered as a Muslim holy site. 2/3rds of the way up, a museum is actually located IN an extensive cave system in the mountain, which was interesting.
At the base of the mountain was an impressive three story yurta, alleged to be a model of one owned by some famous khan whom I'd remember if I wasn't writing this nearly a year later. Entry was a few dollars, which Nurzat insisted was a scam but I was curious, and then they let her in for free to translate and it was kind of interesting. Nearby there was a big museum chalk full of both extensive historical stuff and natural history exhibits (many taxidermied examples of local wildlife, among other things), but all the information was in Kyrgyz and Russian and even with Nurzat translating key bits I wished I could more readily absorb the wealth of information around me. Then I had to bid adieu to Nurzat and her husband -- I wrote her a rave review for going above and beyond and basically saving the project and I think she's had a lot of interpreter gigs since then (recall when she joined me she was anxious because it was her first).
The Organization put me up in the obligatory decrepid hotel for the night (okay it was one of hte better ones in town I think, but it still had a bit of a mildewy aura), next day flew over the beautiful Tian Shan mountains back to the capitol of Bishkek. Spent a day in Bishkek, made final reports, bought some souvenirs (which I don't usually do actually, but I picked up a Kyrgyz flag because I do like the ole Pastry Jack, a copy of the Epic of Manas, and a Red Army elf hat because I can't believe I found one!) flew to Istanbul ... where I had purposefully insisted on having a day to spend with my ex Asli, but she had neglected to mention she apparently has recently fallen in love with some shlemiel in Denver AND gotten a ten year visa, so she bailed out of Istanbul a day or two before I got there.. I'm not bitter ::hides voodoo doll, and voodoo map of Denver that has been placed in the freezer:: So I wandered around Istanbul for a day, it's a lovely place anyway. I wouldn't mind moving there, it's central to everywhere else.
From there to Dubai and on to Melbourne, the end! 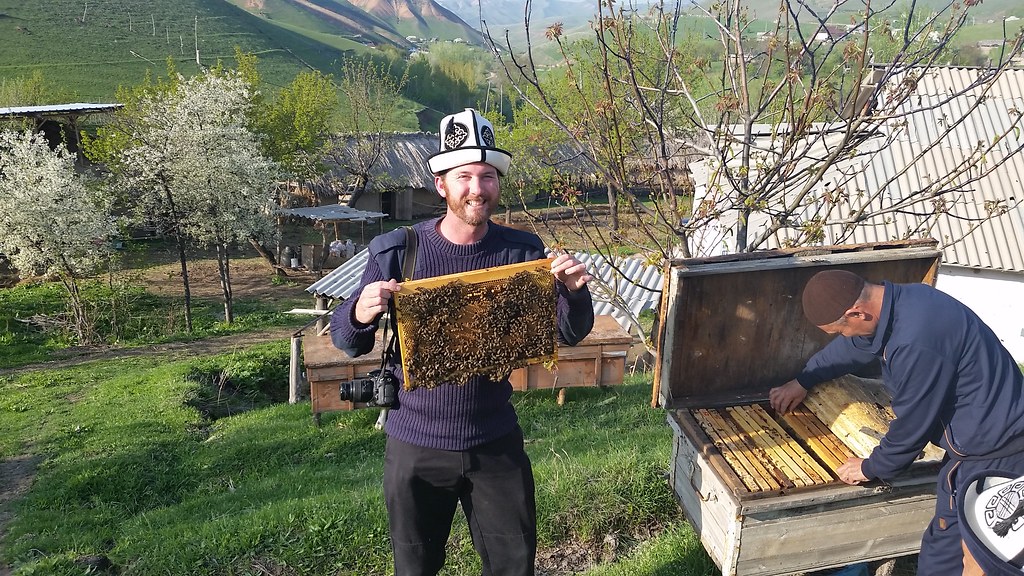 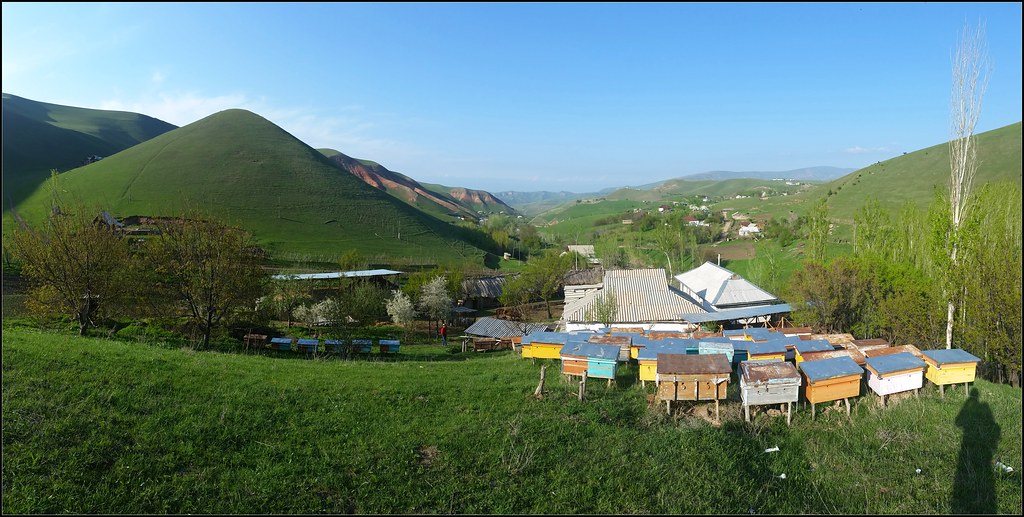