Hours are funny things. By which I mean, the hours you are "clocked in."

When you drive to work you're obviously not paid, but when you get there you're paid for time in transit to whereever you're working right? I used to work for a guy where, we were all staying on the home farm but would drive nearly an hour every morning to the bee sites where we were working. Also of note, we definitely _would_ be working before we departed on said trip, just ten minutes or so loading the truck up but its still work. I initially started my hours when I started work helping load the truck ... but then a week later when he looked at my time card he said no I should start my hours when we arrive there. An hour there, an hour back, two hours a day where I sure am not at my leisure in any form. I quit shortly due to this and many other problems (he wanted me to pay $100 a week to sleep on the porch!)

The other day I had to move some bees at a bee site about half an hour west of my house, which is half an hour west of work. After moving the bees I arrived back at my own place at 10pm and called it a day. But the next morning I still had to complete the return leg back to work, where the work truck lives, which I reasoned meant that in THIS case I was actually justified in "clocking in" the moment I got in the truck in my driveway. (Which for practical purposes meant instead of leaving at 7:30 to arrive at eight I felt justified in lollygagging about until 8 and THEN getting in the truck and heading off to work)

And of course, you don't clock out when you run to the bathroom, so I've always made sure to only use the bathroom when I'm NOT on my lunch break, why waste valuable time!

And I've never been sure if I should be considered on the clock while tallying up my hours. Which is a bit recursive, but mainly its more convenient to do it while at work than some other time on my own time. But today I was putting my assistant's hours into an excel spreadsheet to send off to accounting and it occurred to me that I'm definitely on the clock while tallying someone ELSE's hours so clearly we should all just do eachother's hours. ;)

Anyone else have any interesting thoughts on the metaphysics of hours?

Vaguely Related Picture of the Day 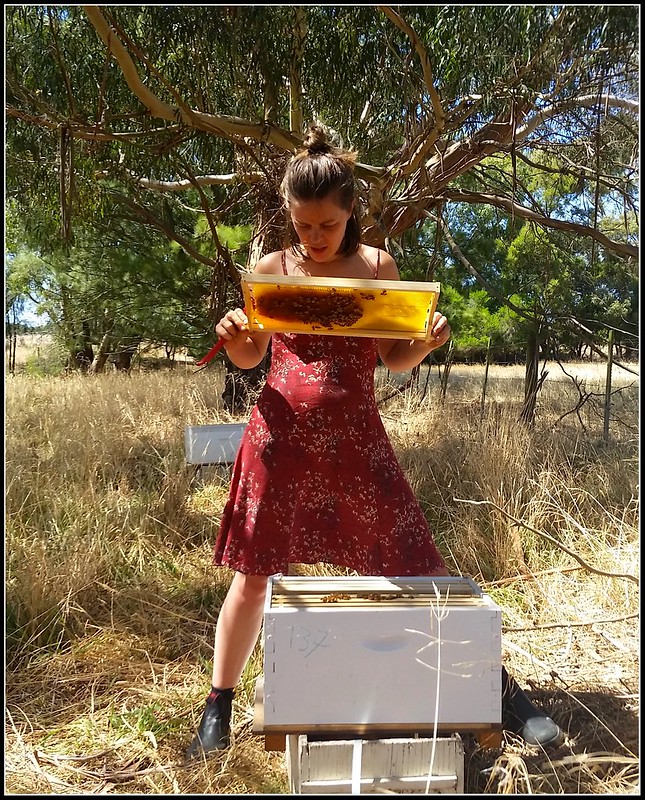 And here is the aforementioned Elyse, my assistant, inspecting a hive today like a boss!