The Scenic Route to Eugene

(Beginning of this adventure)

Oh hey I found out how to embed a google map finally and it turns out it's pretty easy. Here's this day's drive:


Sunday, May 21st - Between Antioch, and my first destination, Davis, The Sacramento River spreads out in a tangle of marshlands and channels in an inverted delta. I've always wanted to drive straight through this area on one of the small farm roads that goes through there, but alas I had nearly nine hours of driving on my plate this day, so instead I woke up early, before anyone else in the house (jetlag was also still making me naturally wake up at 5:30), and crept quietly out a window the front door. I got on the boring major freeway, which took me Bayward to where the bridge at Bernici, which crosses the inner bay high up in a narrow place. On the south side refineries cap the hill like a dystopian crown, billowing steam from a dozen spires. Tolbooths, a rare thing on the West Coast, guard the entrance to the bridge. As you go over you can see the mothballed reserve fleet in Suisun Bay to the right and the California Maritime Academy training ship, which looks a bit like a small cruise ship, moored up just to the left of the bridge on the north bank. From there it's a pretty boring drive on major multi-lane freeways east on the 80 to Davis and Sacramento. An interesting note about the 80 though is that is you don't get off in Sacramento it'll take you clear across the country, and there's a somewhat startling/whimsical sign just outside of Davis advising that it is "3073 miles to Ocean City, MD." Once in Davis I made my way down the leafy streets to Crepeville, downtown, where a "hawaiian crepe" I'd been dreaming about for many many months was to be had!
But since that's a fairly boring way to get from Antioch let me just transpose my transit of the same leg in 2010 to here. I had mentioned in last entry we sailed in to Antioch amid spiders blowing in the wind. From there we continued on up river to Sacramento:
Friday morning we set off to continue up the river. The shore for much of the way consisted of golden brown rolling hills topped with giant white windmills. The sky was completely blue, and the sun so bright you couldn't even look in that direction. Presently the rolling hills disappeared behind 30 foot banks on either side. As these banks were often quite lush with vegetation and you couldn't see beyond them, if one didn't know what was on the other side one might think we were travelling through tropical jungles.
One thing that strangely gets no mention here is that I dinstinctly remember we passed a half sunken old-timey stern-wheeler paddle boat off to the side of the river. Probably not an "authentic" steam boat but someone's more recent folly (there is, after all, a paddle-boat that still plys the river near Sacramento for fancy charters), but nonetheless a picturesque addition to the river.
In Sacramento that October we moored up downtown under "Joes Crab Shack," and I left the ship after six months aboard, I got a ride into Davis (11 miles from Sacramento down "the causeway" over rice paddies) with Maureen, a friend of the first mate's.
Now, 7 years later, as I sat at Crepeville enjoying an absolutely delicious crepe, and in a gratuitous bit of Americana nearby some college cheerleaders from Sac State performed cheers for a small race that was on through downtown that day, Maureen confirmed that she'd love to see me if I happened to be coming up to Bellingham. Bellingham, just about as far north as you can get in the continental United States, happens to be another place I had visited on the boats, and loved! I added it to my trip plans.

But I didn't have time to linger here in Davis! I was soon on the road again, headed up the Five through the northern half of the state. The north/south divide in California is always reckoned to be somewhere approximately around, well, Kettleman City, with the Bay Area and Sacramento solidly being considered "Northern California," but it's easy to forget that there's actually half a state north of THAT.
North of Davis the Five continues straight north up to Redding, which I think is a small farming town? I don't know, no one ever goes to Redding. The land up here has always been green whenever I've seen it, and there's once again a lot of almond orchards but that gives way to undeveloped land forested with oaks and undulating with low hills before Redding. From Redding you can see Mt Shasta rising tall and freestanding, symmetrical like a pyramid, clothed in snow, due north. The freeway leads up to the mountain, well I suppose you're already "in the mountains" by the time you get there, the road slaloming along the sides of valleys, surrounded by pine covered slopes, but Mt Shasta always looms up above, dwarfing any other promontory that could presume to call itself a mountain.

I had taken note that for only an additional 20 minutes on the trip I could take a wildly divergent course to Eugene. The Five goes there directly, or, at the town of Weed (main export... shirts with the town name on them) get off on the 97 and go on a wide scenic detour. 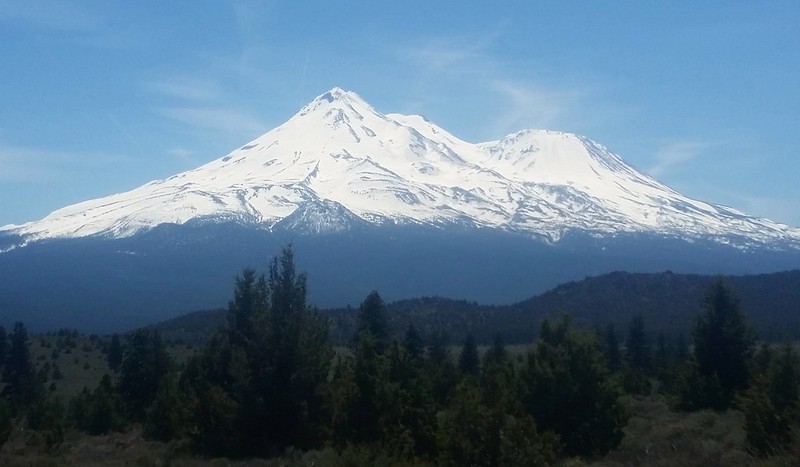 I feel I should explain that there's been a relative scarcity of my usually abundant pictures because my phone likes to do this thing where it works fine during normal life and for some reasno the moment I go on a vacation it starts failing to save pictures. Sometimes they would immediately appear as an unreadable file, or sometimes more insidiously they would seem alright and then anywhere from ten minutes later to days later become an unreadable file. What pictures I do have from this whole vacation are only the ones such as the one above which I had uploaded to instagram.

The above picture was taken from a scenic turnout north of Mt Shasta, looking back at it. The 97 was much more enjoyable than the boring ole Five, a two lane country highway it swooped among the mountains and becomes the main street of small towns. Almost the entirety of my journey on the 97 was through forested mountains and at some point there was even snow on the ground on either side of the road. I discovered that Klamath Lake, which the road runs along for a bit, is actually quite big. I was also excited to drive right past Odell Lake, which is subject of a game I remember playing on the monochrome-monitor computer in computer lab in elementary school, which was essentially a trout simulator (man they don't come up with game ideas like they used to!)

Finally came in to Eugene around 6pm (of course there were still hours of daylight). I had come to Eugene on Epic Roadtrip 2008 and also stayed with my friend Garian and her husband Charlie, though in the interim they've lived in Philadelphia for most of the intervening time (I visited them there too though at some point). But now they had a (six?) year old named Charlie (like his father) and a (three?) year old named Aramea (I think??). Garian had been a friend of mine freshman year of college, way back in 2001.
Enjoyed catching up with Garian and Charlie and it was funny Little Charlie apparently took quite a liking to me (kept interrupting conversations to try to tell me things), and Garian kept saying "this is weird he's usually really shy!"
And they still had their adorable pet corgi even though I think Garian said she/he is like 12 now!
Garian, tall and blonde, but not in a bimbo-esque way, had been Navy ROTC when I met her freshman year. I don't recall when or why but I think she ended up deciding what she was doing at Davis wasn't for her and next I can recall she was studying architecture in Eugene. This is where I thought she had met Charlie but I learned in talking to them this evening that the story is actually cuter than that -- she had been back home in Pennsylvania when they met and he had moved to Eugene with her. Then as mentioned they had both gone to Philadelphia and gotten married and now were back. Charlie is ethnically Syrian, I think he grew up mostly in the States, he seems as American as anyone, but I remember him mentioning a home town in Syria near the Krak des Chevaliers that in 2008 he had said he'd like to take Garian to visit some time. I think that plan is probably curently indefinitely postponed :-/

The next morning Charlie and Garian had to get the kids fed and dressed and off to school (or day care or wherever such aged kids go) and get off to work themselves and I got to witness first hand the circus of trying to get even well behaved kids through this process in a timely manner!
And at the same time they were out the door I was too! Destination: Spokane! (for the first time on this trip a place I've never been anywhere near!)