In Which It Takes Me All Day to Travel 100 Miles 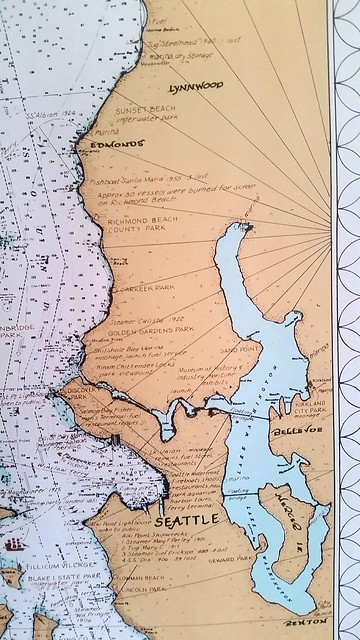 ( Beginning of this Adventure )

Friday, May 26th - This morning my plans experienced a last minute change. My dear friend Koriander was finishing a short course in the nearby town of Edmonds at 11 and proceeding immediately south to go get back aboard the Lady Washington, and I was going to catch up with her there on Monday, but since I was literally going to be passing right by Edmonds right when she was getting out we made plans to at least briefly meet up.

Edmonds turned out to be about half an hour from my friend Mike's place, where I woke up. The entire trip was through urbanized space on raised multi-lane freeways full of morning traffic. I had been in Edmonds with the boat in 2010, and I recall people asking "so how do you liked Seattle??" and thinking "we're not IN Seattle, weirdo" ... it IS practically in Seattle if you have a car, but when we were boat bound with only our two feet for shore transportation Seattle may as well have been on another continent.
I rather fondly remember Edmonds from my earlier visit. It has a small-towny little downtown of the seaside-tourist-destination variety, surrounded closely by sleepy suburbs. Perusing my 2010 entries I said of it "[it] isn't a miserable soulless place like Everett" (next town up the coast and previous place we'd been on that journey), and there was one bar we really liked of which I wrote "...and the bartenders consist of the owner, his wife, and his son. The bartender informed us 'treat this place like your livingroom and we'll treat you like family,' something that might seem like trite crap at a corporate chain but it feels pretty accurate here." I would have liked to pop into that bar this time but I couldn't remember and hadn't recorded the name, nor could I remember quite specifically where it was. Notable events of our stay here in 2010 were the boat's birthday, a zombie attack, waking up in the middle of the night and bolting out of my bunk as a crewmember screamed for help only to find he was having a nightmare, and one of our returns to dock, which required coming in in reverse was accompanied by the distance being called by crewmember Noah standing on the aft rail: "30 feet, 25 feet, 20 feet, 15, 14, ... 10, 9, 8, 7, 6, 5, 4, 3 GET DOWN GET DOWN ::CRACK!!::" as we all dove for cover as the mizzen boom which overhangs the back shattered against some structure behind us.
It was a beautiful sunny summer morning and as I came into the suburban streets of Edmonds the snow capped Olympic Mountains stood out clearly across the sound. Parked downtown around 10:50 and then googled "maritime training Edmonds" to try to figure out where Kori might be, and when Compass Courses, with whom she'd taken some of her other maritime license related classes (she has the 100 Ton Master's License! She's no longer merely "Sailor Cilantro," she's "Captain Koriander!") I knew it was the place so I started to walk that way. As I walked by a shop downtown a really cool map caught my eye that looked like a marine navigation chart very elegantly all decorated up (the above picture of the map portion showing Seattle and Edmonds is from the very map), but I had to keep steaming along to meet Kori. 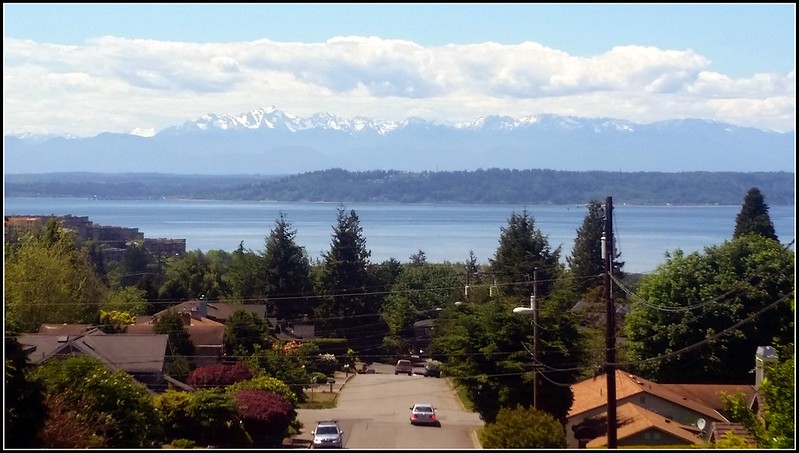 I swear I parked and walked into the middle f the street to take this, really

Kori claaims we haven't seen eachother in three years, I find that hard to believe but have been unable to remember a meeting that would contradict that timeline. She is Hawaiian, shortish, with large brown eyes. I was waiting for her in front of the place but she snuck out the back and caught me by surprise with a flanking maneuver. Greatbighugs ensued. She really was in quite a hurry so we hopped in her car, the SS Minnow, and proceeded to a Hawaiian fish/sushi restaurant nearby where she was gonna get lunch for herself and her grandparents whom she'd be immediately going to see. I really don't like fish and was sure there'd be something non-fish there despite her doubts ... yeah no she was right, there was no non-fish option so I decided just to eat later. The offerings looked very good though if one is into fish! So if you're ever in Edmonds looking for good fish... I can't for the life a me remember the name of this place and even googling and looking at maps isn't helping.

All too soon she had to run, but we had plans for me to join her on the boat on Monday so hopefully it wouldn't be long. I then went back to the store where I'd seen that super keen map, and I purchased the heck out of it! It now graces my wall here and I am endlessly pleased with this reminder of all the beautiful places in the Puget Sound area that I've sailed to. 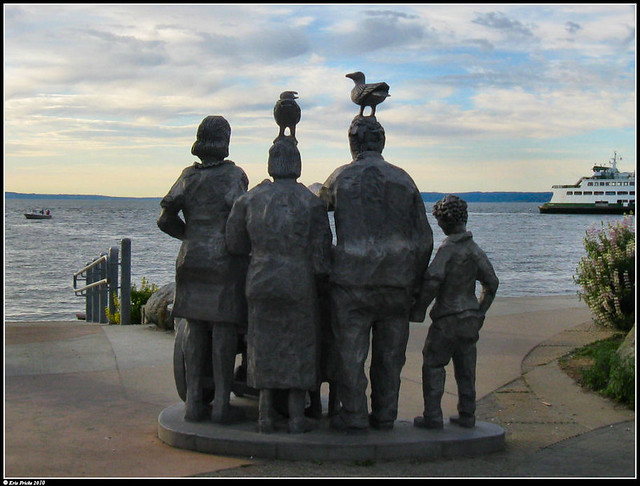 Picture from 2010, would have liked to see this statue again

I had wanted to drive down to the marina to see the exact area I'd lived for a week or so aboard the Hawaiian Chieftain but for some reason there was insane traffic down there and I saw that it looked like if I went all the way to the marina it would probably take me half an hour to slog back out in the line of cars barely inching out of the marina dead end for whatever reason. So instead I got back on the freeway to slog through freeway traffic that was even at noon pretty congested. Headed north just a little bit, I think I was in Lynnwood which is also on the above map portion, when I saw the answer to my lunchtime stomach growling prayers ... FIVE GUYS burgers!
People from the northwest are often heard to utter such blasphemy as that Five Guys is as good as, or ::gasp:: "better" ::crosses self in the manner of the In-N-Out arrow:: than In-N-Out. I will grant that Five Guys is extremely good, but my burger, fries (an obscene amount thereof!) and drink I think ran me like $18, whereas the same at In-N-Out would be like 5 bucks. So this is like comparing apples with ... much more expensive apples that are almost as good. That's almost as expensive as a burger in Australia! (But infinitely better than any burger I've ever had in Aus).

Then I finally got some distance under the wheels. Google maps is now telling me the total distance of this day's routing should be two hours of driving but the freeway traffic was pretty bad until I was probably halfway to Bellingham. It was the Friday before a three day weekend so I suspect maybe a whole lot of people were trying to make an early escape and headed north to Canada.
Anyway I zipped up about 2/3rds of the distance to Bellingham, to the Skagit River Brewery in a little inland town once I had finally broken out of the extended urban sprawl of the Seattle area. It was mid afternoon by now, still a nice sunny summer day, and I had a few hours to kill until Maureen got off work, so I settled down on their nice outdoor seating area and had a beer or two. The food looked pretty good and I was almost regretting I was full of Five Guys, though 5G isn't something to terribly regret (except maybe in the wallet!). Now I feel my journalism is really falling short here because surely I owe you a detailed beer review but I can't find any indication of what specifically I had other than that it was an imperial stout that was either made with maple syrup or simply alleged to have "hints of maple" in the taste. Clearly I need to go back.

And then it was time to continue on up to Bellingham! Skagit River Brewery is just half an hour from Bellingham and this time there wasn't traffic. Before I knew it I was no longer in open flatlands but surrounded by forests and hills, and after a turn or two I was coming around the back of Bellingham, or so it rather felt. Past a cemetary and one more turn into a neighborhood to Maureen's place and ::fades to black:: TO BE CONTINUED! Somehow just getting there took an entry length of writing and Bellingham is so awesome it's not gonna be any shorter. 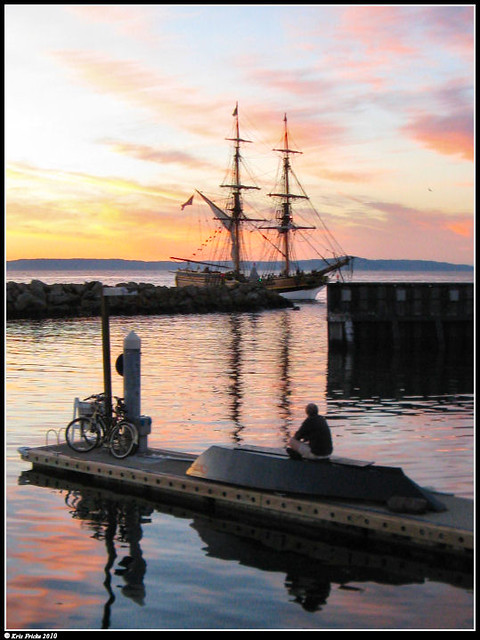 The brig Lady Washington comes in to Edmonds marina, 2010