Taking a Leap: Bellingham to Newport

( Beginning of this adventure )

Monday, May 29th - "Well, are you coming or not?" asked Kori, via facebook messenger that morning, "because I have not make the watch bills and need to know whether or not to put you on them,"
"I really don't know how I'm going to manage it but I r eally want to, I'm trying desperately to figure something out but I haven't yet," I respond.
"Okay well I'm making the watch bill and leaving you off." I'm sitting in my car in a gas station outside of Olympia, haven just driven down from Bellingham.
I'm aiming to catch the tallship Lady Washington (of which Koriander is the first mate) in the small seaside town of Newport, Oregon, and sail as crew to Coos Bay, almost exactly 100 miles (98.3) south. The problem is I have to leave my car at one end, say the start, and then get back there. I thought it would be a simple matter, like there'd be an hourly bus running up and down the coast highway, right? Like a civilized place? No, there's a twice daily bus out of Coos Bay that would take me way inland to Eugene or Corvallis and I'd have to wait hours for a bus going to Newport. Google public transit routing puts the trip at like 26 hours! Renting a car looked to cost over $200 since I'd be only taking it one way. This was proving ridiculously difficult. I posted on facebook for advice from my Oregon based friends, and got back on the highway while racking my brain over the problem.

It had been an easy two hour or so drive south from Bellingham along the big multi lane highway The Five, with no traffic congestion since it was still the middle of the three day weekend. The highway flies through Seattle raised up so high you feel like you're flying right over it and have a good view of the city as it goes by. I don't remember noticing Tacoma which comes just south, and Olympia is hidden by trees, it's odd you notice there's suddenly lots of exits and signs about the city but as you pass through Olympia, the state capitol, you might as well be in a forest as far as you can tell.
To quote myself about Olympia, when we were there on the boat:
Very ironically this is the first place we've been that doesn't have shore water or power or facilities of any kind for us. We had these things in tiny backwaters like Garibaldi and Sequim but here in the state capitol we've got nothing but the power we generate ourselves, the water we brought aboard in Gig Harbour, and we'll have to go find a pumpout dock to get rid of our crap.
Olympia is a weird place. It has one street, 4th Avenue, that has a lot of bars and other cool stuff, but surrounding that is just muffler shops and other boring crap. All the locals look like cracked out vagrant-punks. In most towns we stand out for looking dishevelled -- in this town we all look positively clean and straight-laced compared to the locals. 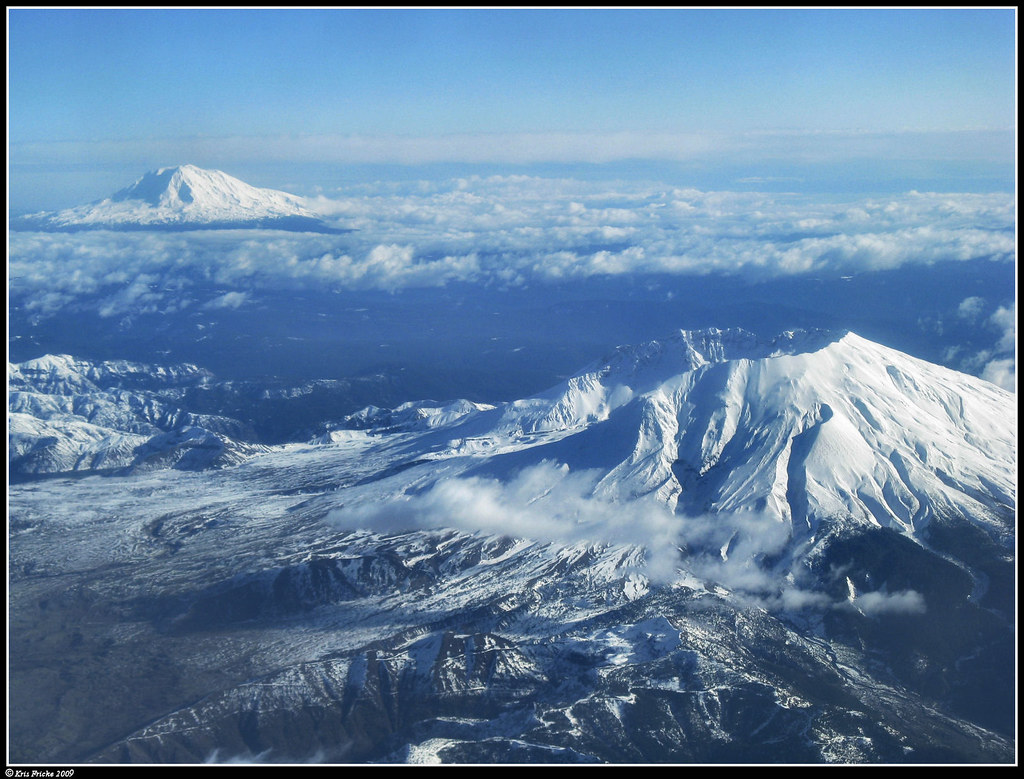 From Olympia it's pretty much a straight shot down the Five to Portland ("PDX"), and much the same as I described the Five south of PDX -- agricultural land with a five o clock shadow of trees growing anywhere anyone has neglected to keep them down, mountains in the distance. I want to say you can see Mt St Helens from the freeway but I might be transposing the good views of it when flying over this same airspace to SEA-TAC airport. Google tells me you can see it on clear days from the freeway anyway.
There was a route to Newport that departed the five before PDX and runs down the coast, which I would have preferred, but I still didn't know if I'd be headed to Newport or catching a bus from Coos Bay or somewhere in between or maybe the whole thing would be impractical so I continued on down the five. Checking facebook just before entering PDX to see if anyone had any good advise yet (which I sweeearr I pulled over to do ::looks around nervously::) a friend I'd forgotten was in Portland had left a comment and as lunch was approaching I messaged her asking if she wanted to get together for lunch. She was down and I left it up to her to suggest a place, and she suggested one of the McMenamens -- McMenamen is a, I guess you could call it a chain but each location is super unique, they buy old sort of landmark buildings and turn them into restaurant/bar places. I was so glad she had suggested it because going to a McMenamens was definitely on my list but it hadn't occured to me this day because I had so much else on my mind.
We were headed to the one called Broadway Pub. For some reason my GPS took me on an extremely roundabout way to get there and I only bothered to look at the big picture when it had already taken me on a wild goose chase. Anyway my friend, Hollie is ALSO from ye glory days of Model UN and PAXMUN and I don't think I've seen her literally since the last time I saw her at a conference. She now has a kid who I think is like 8 or 9 maybe? He came with her to lunch but shyly didn't say much. She is also married to a Brazilian airline pilot. Hollie has been working as a "promotional model" most of the time since MUN I believe.
***Plz allow me to insert here an incident I forgot to relate from up in Bellingham -- while looking at the menu I pulled another totl Australianism. In Australia "entrees" on the menu are appetizers, which I have to concede makes more sense. So I was looking at the menu and skipped over the entrees to look for "mains" and found very few (maybe just the specials), and was just starting to comment on the lack of selection of mains when it dawned on me.
I had delicious cajun tater tots (I've been missing the McMenamen's tater tots!) and [? a burger?] (it's definitely clear to me while writing this that the terminal amount of time has passed since these events where I've practically forgotten everything that's not written down), and a pint of their excellent Tatonka Stout.

After lunch it was time to get down to brass tacks and decide what I was doing, as I'd have to choose which road to go on right after Portland. I still had zero idea how I'd get back to my car or from the one city to the other. It seemed actually quite impossible.

So naturally, I decided I'd go for it. I would leave my car in Newport and despite the apparent impossibility of getting back there from Coos Bay, I would just ... deal with that when I get there.

Google maps tells us there's two routes from PDX to Newport, one along the Five most of the way and one that gets off the Five almost immediately. You can take a guess which one I took. It's an enjoyable drive through over hill and vale and through tiny farming communities and small towns. I had made this very drive one morning in January 2012 when I had a job interview with Rogue Brewery, first at their headquarters in Portland and then the next morning at their main facility in Newport, so the drive reminded me of that.
Anyway it's about two and a half hours from Portland to Newport and despite being on the more scenic road for some reason I started feeling very sleepy and had to stop at one point and jog back and forth a bit to wake myself up. Also as I approached the coast a light drizzle began. The weather most of the trip had been amazingly excellent but the coast is famous for dreary weather. The last bit of the drive was through cute seaside towns.

[This would be the perfect place for the picture I definitely took of the boat at the dock there with with Newport bridge behind it, but that picture has also been lost]

Finally arrived in Newport and the boat was right where I expected to find it. In fact, it was right where I had first joined the Hawaiian Chieftain to begin my seven month stint aboard. Swung aboard and found Kori in the aft cabin. There were several people in the crowded little space, including Daisy, who had been aboard the Chieftain when I first came aboard here, so we were excited to see eachother. I forget if there was someone else who knew me, but after at least Kori and Daisy (both shortish Hawaiian girls as it happens) were like "KRIS!!!" and hugged me. Captain Lazarus, whom I'm not sure I'd met before, did the same thing just to be silly.

As this entry is once again long enough, and I feel descriptions of the boat and crew should belong to the same entry as the subsequent sail, I'll end this one here, where I have just come aboard in the gathering darkness of this memorable little town.