Nicaragua, Going Out in Smoke

Wednesday, September 6th - around 10am the same driver who had brought me up from Managua to Somoto arrived in his red corolla to take me back down. He's a nice professional fatherly sort of figure named Luis. Doesn't speak terribly much English so we don't talk alot but he's very nice.

Coming up, as we drove through the town of Esteli he had pointed out the cigar factories, apparently the major local industry. And he claimed they were as good as Cuban cigars and a lot of Cubans had fled the revolution there and brought their cigar making to Nicaragua. Since I wanted to get gifts for my friend Ben (for driving me the two hours to and from the airport), and Mick for his tech support, and they both smoke, I figured some high quality cigars would be just the thing! So I asked Luis if we could stop by a cigar factory.
"You want tour of cigar factory?" He asked. Why, yes, sure, why not! Luis immediately set about calling a guy who arranged tours.

Arrived in Esteli just before noon, and since the cigar factories are apparently all on lunch break till one he showed me around downtown a bit. Saw one building with a mural of rebels fighting during the civil war with raged 1978-1990 in Nicaragua painted the side of a building that was pockmarked with bullet-holes from that same fighting. While we were in the central cathedral the howling wail of an air raid siren began just outside, which I found quite startling. The news these days has been saturated with North Korean nuclear ambitions but I immediately dismissed my immediate area as at all a plausible target for North Korean nukes, but maybe they were volcano alert sirens??
The tour guide seemed unperturbed as he continued to walk up the aisle toward the altars and many surrounding statues. "Uh, what was that?" I asked as soon as the siren had stopped.
"Oh, that" he chuckled, "they do that at noon every day day so everyone knows to go to lunch. Noon at 6am"
"They blow that thing at 6am???" I asked in shock, "it's so loud!!"
"Yes, so everyone knows to get up for work"
Then the church bells began to toll. "They also do that" he said nodding upward
"It's much nicer I think" I said.

Presently it was time to visit the cigar factory. We drove past a few of them before coming to the one we were to tour. I had kind of pictured there'd be cigar making machines in it, but instead there was a big room full of people sitting at desks making cigars. One thing that particularly impressed me was that the tour guide nodded to a guy who looked indistinguishable from everyone else, sitting at a desk busily folding leaves together, with a lit cigar in his mouth, and said, "that's the boss."
The tobacco starts by aging for (six months?) in a room adjoining the assembly area. They say it ferments but I'm not sure if this is in the same sense as beer/yeast fermentation? Either way apparently they heaps of tobacco get extremely hot and have to be overturned every now and then to prevent the stuff in the middle from getting burnt.
People at the first few tables were sorting leaves according to how dry/dark they were, then at another set of tables they were actually rolling up the cigars. I'm told one person can make 350 cigars in a day, and gets 1 cordoba per cigar (30 cordobas = $1, so they're making around $11 a day), but between the drying and aging and all each cigar is about a year in production. After watching the cigar maker make a few I was given a chance to try my hand at making one ....... I'm not about to make it rich as a cigar maker.
From there they go to a shaper who smooths them out into the perfect shape and then to people who put the little label rings on them.

Now of course after all this I was offered to try a cigar. And now, I'm quite proud to have never smoked a cigarette or... anything else except the nargile hookah things in the Middle East, but I figured since one isn't supposed to actually inhale cigar smoke it's not the same as smoking a cigarette so I thought I'd give it a go. I was also not terribly good at this, though someone took a picture of me and I like to think it at least looks relatively suave. The owner took a break from his work to come over and give me some cigar smoking pointers, as did the one security guard, whilst casually wearing his shotgun slung around his neck, and I have to give everyone in the room credit for not falling over laughing at my difficulties in sucking in enough air to keep it puffing without coughing on it myself. I'm sure they had a good laugh once I left.

Continued on to Managua, with a stop at a grocery store to buy some of the Nicaraguan Flor de Cana rum. Got to the hotel around 6pm, which was after the hotel store had closed which made me very sad because I had rather fallen in love with a small painting of a toucan there that I had intended to buy, and since my flight was early the next morning before the store opened, I'd have no chance.

That evening in the hotel bar there were a bunch of disgustingly wholesome looking young men, they type who look like they're all named Chad and play guitar at their church youth group, and they were enthusiastically comparing eachother's churches and discussing the pros and cons of churches charging for parking. I'm assuming they weren't drinking alcohol.
At the airport the next morning another group of young men in suits with name tags approached the gate area and I at first assumed they were the flight crew but nope more religious missionaries. The power in the terminal went out for a good ten minutes. Beyond my airplane through the windows a large plume of white smoke rose from a volcano. While I waited I read the latest hurricane news, hurricane Irma had broken all sorts of records for size and scale and just mauled Puerto Rico. 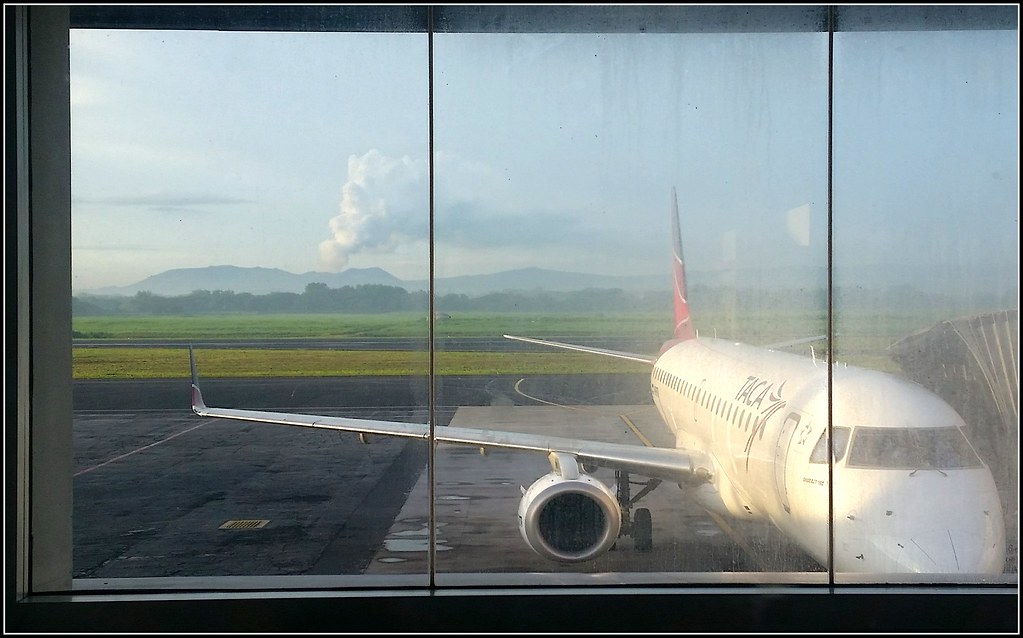 During my flight to Atlanta they served us a pitiful "ham sandwich" (just some ham in a beat-up looking roll), and my stomach, having survived the local water in Kyrgyzstan and Nicaragua all this time, had a bit of trouble with this questionable parthian shot of a sandwich -- such as that when I arrived in Atlanta with two hours during which I could have eaten at the Five Guys there I couldn't muster any appetite.
Continued on to San Francisco and... that's another entry!


[in other news, posting this from back home in Australia! Where I finally arrived today!]