Monday, September 25th, Paris, France - I'm staying in the neighborhood of Argenteuil since my one friend in Paris lives here. While it's currently just an urban suburb of Paris, the name comes from the latin for silver + a celtic word for glade, so I like to picture it having once been beautiful forest glades beside the silvery shimmering surface of the Seine. In ye days of yore it must have been quite far from the ancient city of Paris, as it takes an hour by metro to get to the city center, crossing the Seine twice as it makes its big curves.

Arrived Monday morning at the Charles de Gaulle airport at the other side of town, took maybe two hours to get to Argenteuil after some mild but not insurmountable confusion trying to figure out the public transit.

Now, I don't know if I'm just particularly inept at booking things or this happens to everyone, but when booking things online I find often when I change one detail another changes without me noticing, or I click submit, page reloads notifying me there's a missing bit of information I have to fill out, which I do, but don't realize that when it reloaded the page, it reset the month. Twice I've had flights in or out of NY that I had very consciously tried to get out of JFK but it had switched to La Guardia on me (much harder to get to by public transit); once I booked a flight up to see a friend in Washington only to arrive at the airport to find out I had booked it for the wrong month (couldn't reschedule or even get a refund!!). So now when booking flights not only do I very very carefully scrutinize all the details before clicking submit, I always send the details to a friend to have a second pair of eyes confirm I'm not glossing over something myself.
All this is to say that after lugging my gimpy luggage (one wheel is broken) all across town I finally get to my hotel to find... I had booked it for these dates in October rather than September. The hotel did not currently have any rooms other than for nearly twice as much at €140/night. And to my utter horror my hotels.com confirmation email had the words "Cancellation policy: non-refundable" on it. After all the traveling I've been doing, with reimbursements yet to come in, I'm not feeling exactly flush with cash and losing around $300 over such a stupid little mistake would make me want to hyperventilate a bit, but fortunately the hotel staff was very nice, I talked to the hotels.com people on the phone, they talked to the hotels.com people on the phone, and we got the whole amount refunded.
But now I had to find a new hotel. After some googling and asking around I ended up at a nearby "Ibis Budget" hotel (€65/night) with a 2.7 stars review average and the gist of the reviews being basically "surely you can cough up a little more money and go somewhere else." The floors were stained and the tiny room reminded me of a hospital room (light lime green walls, does anyone, even those dying in hospital rooms, really want that?) but it wasn't THAT bad really.
The next morning (Tuesday) my friend Chantal met up with me. She being a native French speaker and actual former professional hotel booker (that's what she did in the airport in Cote D'Ivoire when/where I met her, while I was stuck in the Cote D'Ivoirian airport for three days of airport hell) we were now able to call hotels for more efficient investigation.
As it turns out, the "hotel" just beside the cute little restaurant I had discovered turned out to have a decent room for €40 a night. It's maybe not quite 5 stars but it's bigger, better, and cheaper than the Ibis Budget had been. I say "hotel" in quotations because it appears to just be a number of rooms upstairs in this building, which seems to be a standard thing, with locals during our hotel search referring to any hotel that was a dedicated hotel building as a "hôtel moderne" vs the many little "traditionnel" hotels.

Now, I went to Versailles and the Louvre and I'll get to that in a minute, but I think the cute little restaurant beside my hotel was my favorite thing in France. It was just a cute little place with one three course set menu every day -- for €13, an appetizer, main, dessert, and a _carafe_ of wine! I remember last time I was in France I encountered the single set menu thing as well, I think its cute. The place seemed to be mostly frequented by locals, and it sometimes took two of the employees working together, combining their meager English and my meager French, to get my order across but they seemed not the least bit bothered by this. After eating the first day I discovered they don't accept cards and I didn't have any Euro cash yet ... but the (manager?), Hamid, said "you'll be here a few more days? pay tomorrow, not a problem!"
On my last evening I came in around 8:30 in the evening, I asked Hamid, who appeared to be off duty but hanging out there, if they served dinner, he communicated that they did not but after I asked if anywhere else nearby might be serving dinner he thought about it, seemed to conclude there wasn't, and was asked me if I'd like some beouf et pomme frites, and then he scampered off to fire up the kitchen and ended up bringing me the whole three course meal, wine carafe and all, for the same €13!
In Australia for that price (19.58 Roo Bucks equivalent) you could get maybe the wine carafe.
And in general, this little restaurant being just beside my hotel and the staff all being super friendly it was just a joy every time to pop in and see them.

Tuesday, September 26th - After getting my hotel sorted out Chantal and I proceeded to Versailles (about an hour away, it seems like through something like relativistic physics everything is an hour from everything else via the metro system). There was a huge line to get in. Once inside it was pretty cool though. There's plenty of writing about Versailles around so I'm not going to spend time on a detailed description of it here. Sadly after having spent the morning chasing after a hotel we were getting too tired and hungry to really explore the extremely extensive palace gardens, I suppose I'll have to go back. 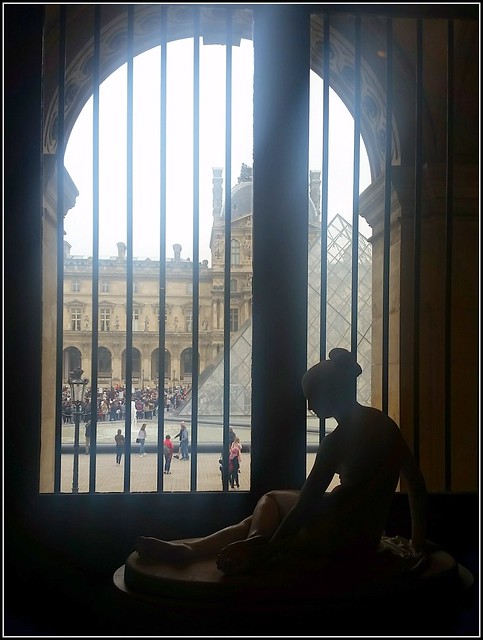 Wednesday, September 27th - Went to the Louvre (by myself, Chantal unfortunately had her first day of classes for the semester in a local uni). About an hour on metro. Fairly long line at the main glass pyramid entrance (though it was just after opening at 9am on a random dreary weekday in September so it wasn't as long as it could be I think), but I didn't even bother with that as I'd gotten a pro-tip from the internets that there was a secret underground entrance with no line. Verily, I found said entrance and there was no line (pro tip, when visiting the louvre, find the secret underground entrance ;) ).
Previously I didn't actually know what the Louvre was other than a big museum, presumably underground. It turns out it's in another former palace, mostly aboveground, and parts of the original medieval fortress can be seen belowground, who knew!

They always say it takes days to see the Louvre, and, keeping this in mind, I maintained a pretty fast clip throughout and avoided me usual reading of most every description (avoiding the temptation was aided by the fact that many of them were only in French). I'm not sure but I think I managed to see all the major areas, though in the end I found myself in a hall of rugs and feeling delirious and hungry I may not have seen all the rugs.
Part of the problem though is that it's not really a museum that has a single logical path through it but you have to kind of backtrack and and circle back through areas to get to places you may have passed the first time through.
Saw the Mona Lisa, sort of ... this was as close as I got. Saw the Venus de Milo behind a forest of selfie sticks, and a lot of less famous stuff, like this cool grave-related thing (sits on top of a grave or sarcophagus?). A hall of statues, three muses, a centaur and stuff.

After becoming deliriously hungry I finally stumbled out to go find food (there's cafes inside but they all looked extremely unsatisfying and overpriced). At this point I was feeling too hungry to even make a decision about food but I wanted to eat at one of the cute sidewalk cafes Paris is known for. Ordered a "confit de canard" or some such, precisely because it seemed very French. Thats duck confit but I don't know what confit is still. It was alright but not really amazing.
Then I just wandered down to the cathedral of Notre Dame on its wee little island in the Seine. I found the scenery and architecture very beautiful in this area, and there were some quieter cuter sidewalk cafes here I rather wished I'd held out for instead of stumbling into the first one I came to outside of the Louvre, but as mentioned, was deliriously hungry at that point. Reflected that though I wasn't quite sure I wanted to like Paris since it seems a bit over-romanticized in the world's collective imagination, this area is indeed quite charming and beautiful. And on the subject of collective impressions, I've seen no evidence of the "french people are rude" stereotype, as mentioned the people at the restaurant by my hotel were super nice, as was the woman at the booked out hotel, and during my previous visit while in rural france the hotel manager drove me to the train station since no taxis were to be found, altogether my experience has been of exceptional nice-ness in France.


Thursday, September 28th - Departed via the Orly airport south of the city. I still haven't seen the Eiffel Tower up close (did see it at a distance, it sure looms over the city!), also I really wanted to see the catacombs. Next time!

Am now in Turkey for the beekeeping conference. More on that of course in another entry!