October 4th, Istanbul - This day began with a bit of a panic. Five hundred people were milling around in front of the conference building, there were a rumoured 14 busses coming along to pick us up for the technical tours, miraculously people formed into a giant single file line without even being told, and got their tickets out and... wait, what tickets?? I had paid online for the technical excursion when I paid my conference registration, but never got a physical ticket. I tried to go in to the conference building since I knew the secretariat had an office on the subterranean floor the conference took place at, but security wasn't letting anyone in, there were a few other people with the same problem trying to talk to someone but the only people in the lobby were security personnel who knew nothing. There were no conference staff anywhere in sight! I joined my Australian friends in line, anxiously hoping the staff would be checking names on a list or something.
The primary reason I had signed up wasn't so much I felt the urgent need to see yet more bees so much as I recalled from the conference in Tanzania that it was on the technical tours that I actually met most of the people I met, since there's not nearly as much opportunity to meet people during presentations or passing in the halls as there is on the busses and such. Sure enough, whilst I was in line I met a nice young man from Tanzania who wants to go into business with stingless bees!
Well there wasn't a list... but the person a few people ahead of me showed them the invoice in her email on her phone and they let her on. Quickly I started scrambling to get my email open but then we were at the door, my Australian friends were boarding and I was still dredging through my emails. Then they were saying "we can get one more person on this bus" and I got the requisite email open and triumphantly showed it to the guy manning the door, who looked at it so briefly I figured I coulda probably shown him anything, but he handed me a ticket and waved me aboard.
At this point of course there was only one seat left and it was beside a bearded Argentinian who quite rudely I felt kept leaving his bag on my seat taking up my space.

We drove an hour, across the Bosporus bridge to the Asian side and north-east up to the Black Sea coast. I was surprised by how quickly we left the city and found ourselves going up and down bushy rugged hills. We arrived at a cute little village in a narrow valley, the buses had a hard time navigating the narrow roads. We all trooped down a cobbled street, beekeepers excitedly pointed out a hive on a balcony like they'd never seen one before, and we arrived at a construction site where we sat in plastic chairs and watched a promotional video for the beekeeping informational center which was being built there. Then we all trooped right back up the hill back to the buses.

Then we drove just a little bit to the town of Sile itself (pronounced "Silly"), where we were let out by the traditional outdoor market, and given our lunch. The market seemed to possibly have been set up just for us, it wasn't the busy local market I've often seen, with closely packed tables heaped with vegetables and crowds of locals buying their daily food, but rather was a quiet affair with booths set around the outside of a square -- we appeared to be the only customers. We were encouraged several times by official announcements that we should buy the famous local cotton cloth. It was also announced that after this we'd go down to the beach and we could have coffee there. At this point many people started approaching eachother to ask if they were on the right tour, and were we going to see any bees?? Some Romanians approached me to ask these questions and pointed out as well that only half the busses were here and half their friends were missing. "What's going on??" they urgently wanted to know. I was similarly approached by some Czechs. Nothing brings strangers together like confusion and fear that something's gone wrong. I asked if the Czech Republic had ever hosted Apimondia and they said "yes, in 1966, before the Soviet tanks came in 68," "well you're overdue then!" I said cheerfully, and when he gave me kind of a weird look I added "for another Apimondia, not more soviet tanks!!"

The Tanzanian lad was marveling at the size of some chili peppers being sold in the market. He told me they don't have such big peppers in Tanzania, I said he should get some seeds and plant them, and his eyes lit up like this was a genius idea and he immediately bought some chilis to get the seeds out of. And here's some weird fruit that were next to the chilis. 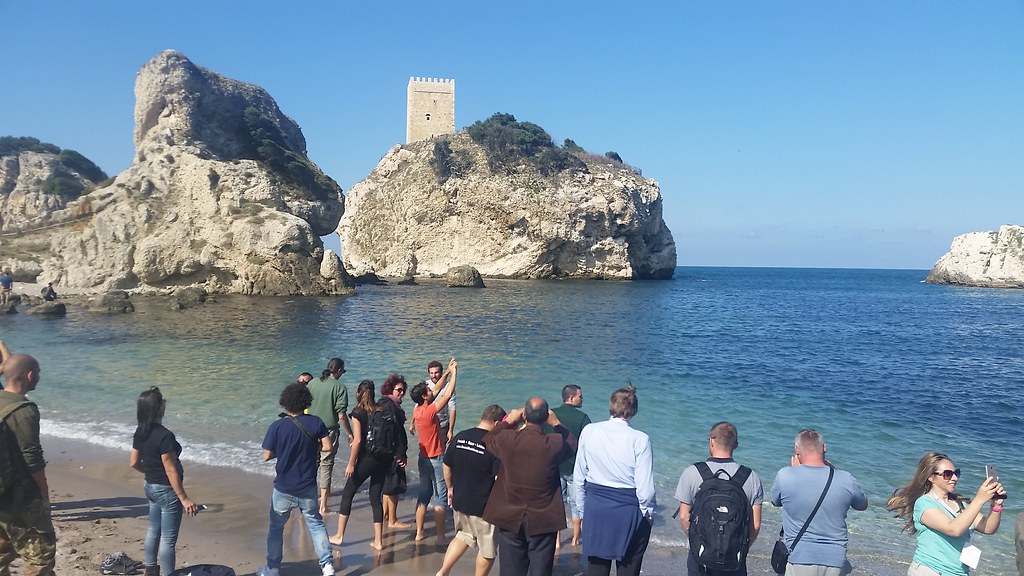 We then reboarded the bus to travel just a few minutes down the main road through town to the waterfront. There we found ourselves separated from the lapping waves of the Black Sea by merely some rocks and a low concrete wall. People immediately began scrambling down to the water, which was blue, clear, and inviting. One unabashable old fellow immediately stripped to his skivvies and dove in, proceeding to swim to an island about 200 meters out. On another nearby island stood a square castle towerA, which I thought was a delightfully dramatic place for a castle, since the island walls were very steep. It looks like it could have been connected to the mainland by a narrow causeway, I think I saw what could have ebeen the remains of stone pilings. At the time I had no particular information about it, but now that I can look it up on wikipedia (recall, wikipedia is blocked in Turkey), it's apparently a 14th century Genoese castle and apparently there's a controversy! I thought it looked a bit crisp, it was recently renovated, but there seems to be a weird amount of outcry that they went too far and it "looks like Spongebob now." An inquiry was even openedA. I don't really see it other than yes both the tower and spongebob are rectangles. My only concern would be if they really departed from the original design and it does look like there were big arch-windows that are no longer there. At least they got rid of that ugly sign that had been in front of it.
Then I had some turkish coffee (confession time, this was the turkish coffee I posted a picture of earlier), and was joined by a Swedish beekeeper, who broke Swedish stereotypes by being a bit overweight. A bit balding, he looked like someone you'd expect to find hating their life in a cubical in some midwestern US city.

We reboarded the busses, traveled for about twenty minutes and spent another twenty minutes as the bus repassed the same area repeatedly trying to find the turnoff it was looking for. Finally we arrived at a cleared area among the hills where beehives could clearly be seen in many places. Finally!! Everyone eagerly disembarked the busses. Also sometime around now we learned that the total group of 500 had been divided in two so the other half had done the bees first and the things we did second.
Anyway this area turned out ot be really cool! All the honeybees you see are generally all the same species, Apis mellifera (there's about seven other species of Apis but they're only found in southeasern Asia), but there's some 250 different subspecies and a handful of these are used by beekeepers. In this yard each set of hives was a different subspecies, and were on hand with smokers lit to open up hives and show us the bees! ... really there wasn't too much difference to see even for the discerning eye, the differences would be found in honey production and seasonal behaviors that you wouldn't see in a minute of looking in the hive, but at least we could determine which ones were the most stingy!!
There was also a bee truck -- a big-rig with a trailer that was filled with beehives with their entrances to the outside, and a walkway down the middle. Each hive had it's own thermostat and temperature control. Afterwords talking with my Australian friend we agreed it was cool but probably totally overengineered ... probably had just been made to impress us.
I met a couple from Nigeria and greatly amused them by breaking out my one phrase of Nigerian pidgen English ("hw u day?" (how are you), "I dey kampe (com-pey)" ("I am well and strong")).
As we reboarded the busses here I noticed the Tanzanian lad was carrying a lavender plant he had purchased "we don't have these in Tanzania!" he told me cheerfully. He's gonna have quite the interesting luggage.

From here we proceeded about an hour back into the Eastern suburbs of Istanbul where we arrived at a honey processing facility. Specifically, it was the "R&D" facility for Turkey's biggest honey packing company, which, incidentally, is one of the biggest in the world (Turkey itself is the third largest exporter of honey in the world and considering the population is a lot less than numbers 1 & 2 (US and China), clearly honey production is big business in Turkey. 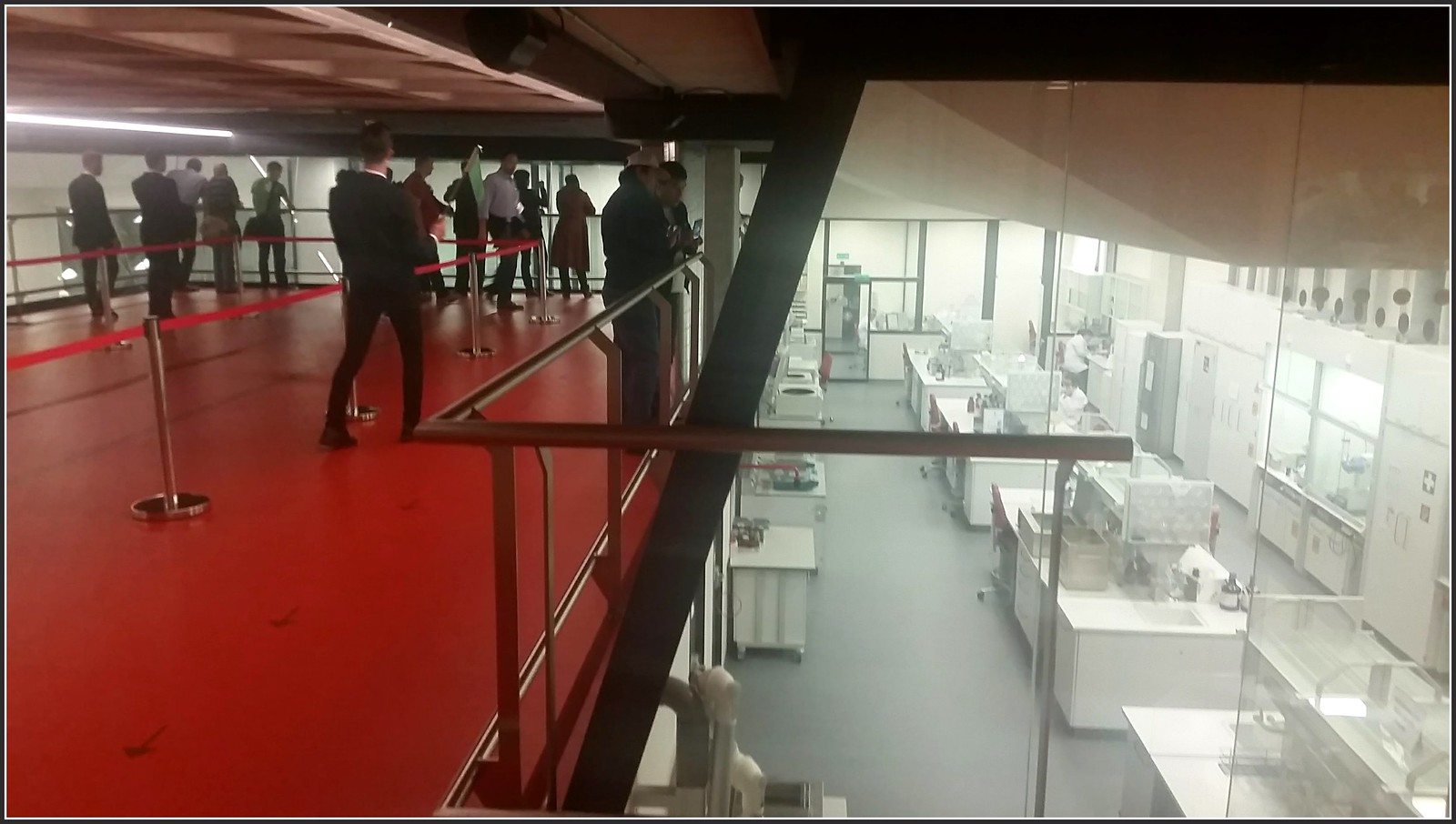 As you can see in the above picture not only did they have an impressive laboratory, but basically the floor above the laboratory was a dedicated viewing platform of the lab floor! I felt like I was in some Bond villian's evil laboratory lair!! At first this seemed to me to be a baffling use of space but talking about it with my friends we came to the conclusion that actually the entire R & D facility is a giant marketing thing. When you're in the business of making contracts for thousands of tons of honey worth millions of dollars a year, when you have potential visiting clients you want to absolutely wow their brains out. When they're standing on your Bond-villian red carpeted viewing platform gazing down at the impressive lab equipment in the shining white laboratory floors, and the dozens of industriously busy and strangely uniformly kind of attractive mid-20s aged female lab workers, you feel like you are IN on the evil plan and it is a solid investment for world domination!!

From there it seemed to be at least an hour through traffic back to the conference center. Arriving there, had dinner with the unofficial Team Australia one last time. The overly-lengthy journey home, which I came to think I must not have been in my right senses when Ii booked, will be detailed in a subsequent entry!