Now, I don't really watch TV (I don't actually own a TV), and I rarely seem to be watching whatever everyone else is watching (though after GoT had been going four or five years I finally caught up whilst in a cave in central Turkey and have been a huge fan ever since), but I do sometimes watch things on Netflix.
Back in high school when Star Trek Next Generation was still airing I was rather fond of it. I watched a bit of Deep Space Nine but it failed to really catch my interest and they seemed to be just godmoding around once they got their super stealth space fighter jet the Defiant going on (though admittedly I was already barely following things by then), and Voyager really I think I just didn't find any of the characters likable, and many of them downright annoying. And then that series Enterprise, I've never seen at all but from the trailers and things it just didn't appeal to me, though I don't remember well enough to say what put me off. And the movies! the more recent movies have all felt like they were trying to be a stupid action movie too hard instead of whatever it is exactly that makes Star Trek Star Trek, and having to compress their storylines into a movie -- people are zipping all over hte galaxy and having interstellar action sequences which make it feel like the whole galaxy is one very small place.

But the Discovery trailers somehow caught my interest and enticed me to watch it, and now, lo, verily, I am caught up on a series in its first season, I can for once participate in the true heart and soul of livejournal, fandomry!

I have found the series to be a really good mix of action and adventure without feeling forced like the recent movies. There's plenty of action happening but it's still very Star Trek.

One major thing I really look for in series or movies is complex characters. Star Trek has had a tendency to have everyone in Starfleet be just such a nice chap / woman, unless they're a purpose written bad apple who will die in the episode. So far in Discovery there appear to be several crew members you're really not sure you like, and I watch subsequent episodes just HOPING they don't become likable, because I'm black hearted like that. Without giving any spoilers away, the (current?) captain of the Discovery in particular definitely seems like someone not entirely admirable, and I love that. He seems to have done some extremely questionable things in the past. I hope he does more!

The one big problem seems to be that, from my just-now-googling, it appears to take place ten years before the original series, but general look and unfiforms specifically are definitely not the same as in the Original series, and the level of technology seems to be more advanced. In particular their key piece of experimental technology seems like it breaks "the universe" by being more advanced than anything subsequently seen.... but it also seems like it might be unethical so maybe it ends up getting buried....

Also is it just me or is Klingon style in this century totally baroque?

And was there a starfleet bridge officer in the first two episodes with a big blocky robot head? You only catch glimpses of them and I'm almost tempted to go back and rewatch because the question is bothering me. 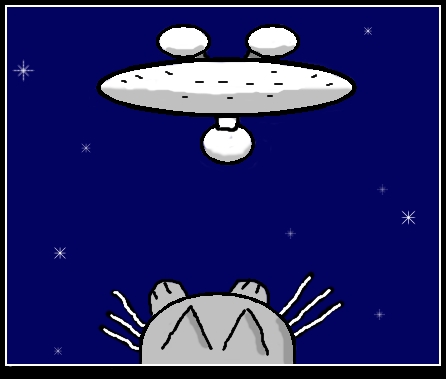 And speaking of doodling, just because I believe every entry should have an image component, here's a piece of a little adventure I doodled up that I call "spacecat."

Meanwhile in real life
Went over to the fire station for some more training for joining the volunteer fire brigade, but it was interrupted when they actually got a call out and had to scramble. "In the olden days we coulda taken you with us but these days you can't come along until you're certified"
Walking back home across an empty paddock in the middle of "town" and looking up to see the millions of starts and the milky way I thought to myself "man, I love this town."

In other news my fridge now appears to be broken. I think someone has put a hex on my electronic devices :'(