Steamy Adventures on the River! 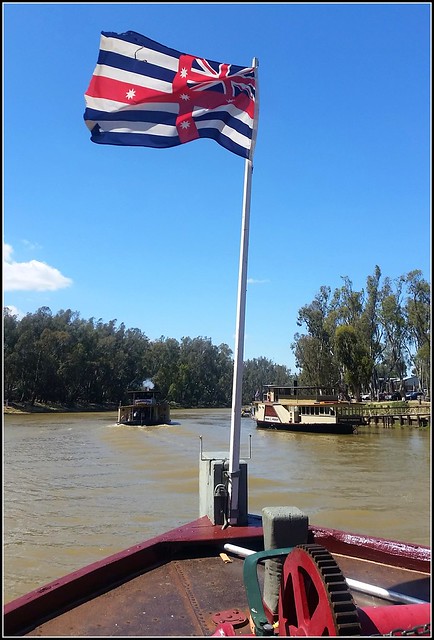 Last Sunday, November 5th, Echuca, Australia - Woke up in a swag on the banks of the Murray River. The Murray River is the border between the states of Victoria and New South Wales for much of its 1,500 mile length. Looking at a map it looks like it empties on the eastern coast but it actually begins in the "Victorian alps" over there near the eastern coast and flows across almost the entirety of the south-eastern bulge of Australia to empty into the Great Australian Bight. In the great age of steamboats it was navigable way past the point where I was encamped, and yet it looked to be no more than maybe 200 feet across here. It flowed slowly, a thick milk chocolatey brown, though I think Billie or Lek had noted reading an account from an early settler of the water having been very clear in days of yore.

After a quick breakfast of oatmeal we packed up camp and headed into town. We headed across the Murray River Bridge to the New South Waleseran (New South Welsh?) sister city of Moama. Moama is contiguous to Echuca but it definitely seems most of what's going on is on the Echuca side. We perused a farmer's market which was afoot there and much to my surprise I found a magic artifact of at least +3 enchantment on a table of knick-knacks -- labelled as a "cannibal fork" (I apologize for picture quality, I think part of it's magic is defying attempts to get a decent picture of it). It looked to be just over a foot long, a glossy ebony colored wood, with a head on the top with African features, a twisty looking shaft, and then it flutes out to four spikes. There's intricate carving where the twist changes into the fluted part, as well as some inlaid mother-of-pearl. And the person only wanted $15 for this artifact of power?? Clearly I had to get it!! It would go great wit the cannibal spoon I already have!

And then we went into a nearby "Op Shop" (Thrift / Antique store) and I was eyeing some clay goblets. There were 6 of them and they were $6 each, so I asked if there'd be a discount for the lot of them and the lady sold me all six for $12!! This was quite the unusual amount of shopping for me! But I'm very pleased, and last night back home here I drank mead from one of the goblets and verily it was good! (And in related news I drank mead out of my new drinking horn the other day, the only horn I have that's actually a drinking horn actually, and it definitely affected the mead taste negatively. ): ): Hopefully I just hadn't cleaned it thoroughly enough and it had chemical residues in it or something (it did taste chemical-ly))

We went to book a ride on a steamship but the only sailing left in the day didn't have enough spots left for us so we booked for the next morning. Walked around downtown Echuca and it was touristy in the best way, if that's not an oxymoron. It was busy with tourists and everything downtown seemed to cater to tourists, but they had not lost site of the old timey quaintness that draws people, nor did they have to fake it, because it was already there. So they kept their stately buildings from a bygone era and didn't besmirch them with neon signs, but just filled them with nice restaurants, pubs, antique stores, candy shops and a camping store or two. By the steamboat dock was a working recreation of a steam powered saw mill which was cool. I wish I had a cool picture of the mill but my phone was dead at the time.

Then we proceeded to an RV campground just outside of town to camp so that people could use the showers. We were able to get a campsite at the other end of the field from nearly everyone else which was nice, but still, the vicinity was just a perfectly flat field which wasn't very scenic, and the wind came in across it pretty wicked cold in the evening. River wasn't in sight from where we were but I think it may have been near the other end of the field where everyone else was.

We went back into town for dinner to a Greek place that Lek remembered from an earlier time she was in Echuca for some work related purpose (she's an irrigation consultant or something along those lines), and it was actually extremely good. 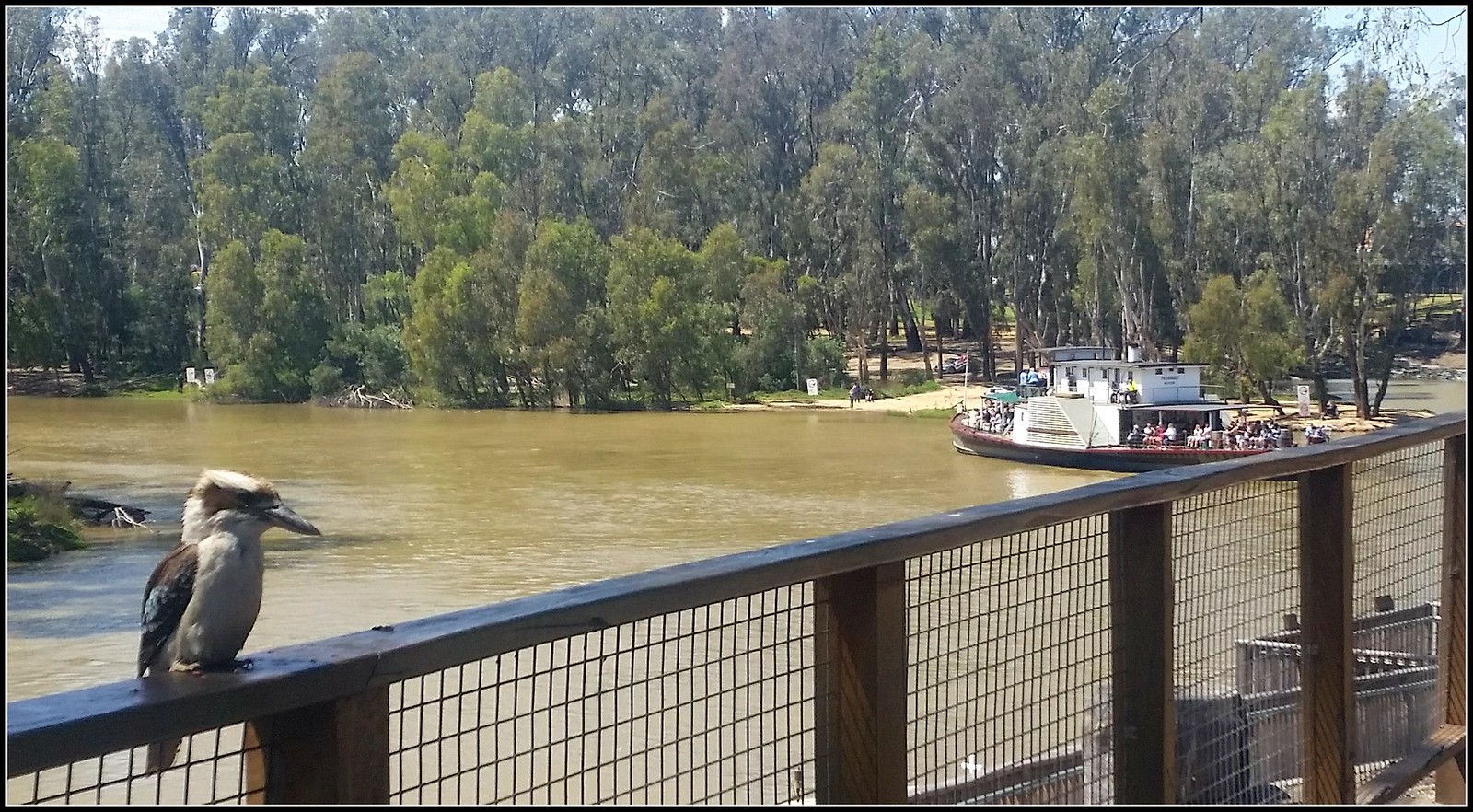 Monday - After a quick breakfast at a restaurant across the street from the steamboat dock we went aboard the Paddle Steamer Pevensey where she was moored up to wooden landing on the steam riverbank. The bank being relatively high, the top of the landing was actually way above us and yet we came aboard the Pevensey on its top deck. As much as I'd like to think my writing skills can entirely paint a picture I'm not sure how to quite give you the idea of the size and shape of the boat but hey here's a good picture of it. One thing that surprised me was just how many boats there were. There were three more similarly sized paddle steamers moored up in front of us, one behind us (and I'm not sure if the Canberra in that picture is yet another or one in the previous picture), and one more a little way up the river. Just about all the boats were authentic 100+ year old boats with some degree of restoration, though only one was noted in the captain's running commentary to have never been on the bottom of the river. The Pevensey itself, which we were on, was built in 1911.
Until eventually replaced by modern trucks, steamboat river trade on the Murray and other major Australian rivers was a major Thing, as they carried timber and wool from the interior to the big port cities on the coast. Apparently there have been two Australian TV miniseries about the steamboat era, All the Rivers Run, and "All the Rivers Run II."
The boat was just over a hundred feet long on deck, with the main deck originally have been entirely space for wool bales, other than the engine, and in the middle a second floor housed the crew cabins and wheelhouse. In the middle under the superstructure was the magnificent steam engine, which I took a video of here and I rather fancy is worth a gander. The original engine! It was hypnotic to watch the thick gleaming pistons chug along. The engineer was happy to answer all our questions expansively. I asked if there were practical differences between stern-wheeler steamboats and side-wheelers such as all of these, and he said why yes, the stern-wheelers of the American West never pulled barges so the stern wheel wasn't a problem --"oh the stern wheel gets in the way of the tow does it?" I eagerly interjected,
"Well, no, it's not that, it's that the load will be pulling right from the back where your propulsion is so you can't turn, and you can't put the towpoint forward for the propulsion or it will keep pulling you around ... with the side-wheelers the tow point is actually the very center of the vessel" and he pointed to the very sturdy supports that converged above the engine and connected to a very sturdy tow point above the deckhouse in the center of the vessel, "so we are very well balanced and can turn just fine with a load." Now that's a thing you know.

We cruised up the river and back for a total of about an hour. The weather was nice, and because the front was entirely open (though covered against rain and sun) even standing next to the engine we got the nice breeze, and I think I did spend a significant portion of the time talking to the engineer and appreciating this beautiful engine.

After we finished our cruise we strolled about downtown just a little bit more and then I bid my friends adieu -- they all had Tuesday off but I did not!

This time I didn't go as far off the fastest route as I had coming up, but I did get on some country roads north of Melbourne (I could have stayed on the relativley freeway-like B75), and found myself going over rolling hills in which several times I wished I could stop and take a picture but there wasn't a turnout in the right place. Sometimes the road went through forests and sometimes it was mainly pastureland (though never without a fair sprinkling of grand old relict trees), and I stumbled upon another piece of Australian history, I found myself on a road called "Burke and Wills Track." The Burke and Wills expedition had been an early (1860-1861) attempt to cross the continent, but Lewis and Clarke they were not and after many many misadventures only one of the 19 men who had set out made it to the other side and returned alive to Melbourne.

Skirted the outskirts of Melbourne and then was on the major M1 freeway from there to home (though it becomes slightly less obnoxiously big after Geelong, changing from the M1 to the A1, and actually has stop lights in Winchelsea). Stopped at my favorite Moriac Pub for dinner as I passed by (Moriac is near work and where I used to live) and half an hour later I was home in the early evening with the sun still shining gloriously!


Altogether, I found Echuca, and especially the steamboats, very enjoyable. Because it's several hours from anywhere else I'm not sure I could recommend it as a destination for someone on a whistle-stop tour of Australia but if you've got time and/or maybe are making a roadtrip down from New South Wales into Victoria the steamboats are pretty cool.