It's time for another episode of netflix show reviews!


Star Trek Discovery
I had previously reported optimistically on the new Star Trek Disco after the first few episodes. Now it's on a "mid season break" (when did that become a thing??" so it's a good time to look back and how it has or has not lived up to expectations. I still find it interesting and watchable but I think it's fallen short of being The Next Big Thing.
Character Development: In the first few episodes they were of course introducing characters left and right and trying to rapidly round them out. This was exciting at the time, but it appears to me that they've done the lazy thing of having a character appear one way in the first episode they'er introduced, "show them changing" in like one episode, and from the third time they show onward oh look they're such a changed person! I put also into this category the terribly written romance that I feel isn't even a spoiler because from the moment the two characters are first in the same room together it's obvious we're looking at a terribly written romance on our hands. This "romance" takes about an episode to result in their inevitable getting together. I hate to read the speculations as it sometimes comes awfully close to feeling like a spoiler, but for my part I feel like it seems unlikely they plan to keep a cutesy relationship going for the rest of the series so I reckon the guy gets killed or betrays them all or something otherwise unfortunate interrupts this entirely contrived romance. Thus leaving our protagonist with a broken heart, oh how cute ... and subtly done as hammer.
Continuity Problems: I think the consensus with the way the series fits in with the other shows in the franchise is that it either is in or sends itself to an alternative dimension. Star Trek is nerdy enough, and all these alternative timelines are hard enough to swallow for normal Trekkies, it seems like that explanation would be really off-putting to non-Trekkies trying to watch. "So how does this fit in with Captain Kirk and all that? Alternative dimensions whaa? ::eyes glaze over, clicks over to Top Chef::" And that explanation still doesn't explain why technology is somehow across the board better than in the Original Series, or the uniforms wildly different. The Original Series uniforms look tacky sure but they could have made them at least vaguely reminiscent. One particular technology that has been bothering me is I feel like in the other serieses they would get messages that clearly had reached them from somewhere else at much-faster-than-light-speed, but it still seemed like it wasn't easy, they wouldn't just casually call someone up for high definition real time hologram conversation. Even if this is a divergent timeline, technology would have generally proceeded at the same general rate wouldn't it?
General Context of Things: this may sound a bit more quibbling, but because their new technology allows them to pop up anywhere instantaneously, and with the added instant communication to anywhere. The feeling that they are anywhere specific has been lost. When they're in a situaion I don't feel they are alone far far away trying to deal with it, like you feel in OS or TNG, but rather they are a button press from home. There's no sense of contextual location. And I find that bothers me.

What I do like though is when characters from the original series wander into the story. I suppose that's why they set it at this time. Though even this they mess up frequently, like I think it hasn't been adequately explained how she's apparently Spock's adopted sister and yet has somehow never come up before.

So anyway, as you may have gathered, I'm not wholly impressed with the show so far, though I'm sure I'll keep watching once they get back from their break to see where they go with it. Now as it happens, when they left me in the lurch for this random break, my attention has been caught by something else, a show I have come to love!

The Expanse
I hadn't really heard any mention of this from my friends or usual sources of hub-bub about shows you really ought to watch, so it was kind of blind luck I guess that it caught my attention on netflix. I started watching it, quickly found myself binging straight through with an episode a night until I got through all of the two current seasons.
THe show takes place (200?) years in the future, where people have thoroughly colonized mars and some other locations, but by and large haven't learned to break any currently known laws of physics and as such are confined to the solar system. Interestingly I had been wishfully thinking such a series already existed and thinking about it months ago! In the series the Earth is governed by the UN, and an independant Mars is the major rival. There's many colonies in the asteroid belt that don't have independence themselves but really want it.
Character Development: As you may have noticed, I am big on character development and complex characters. In this series many of the characters slowly and extremely believably develop throughout the series. There's even a romance that I actually _liked!_ -- it was NOT something you'd expect in the first many episodes with the two characters but slowly you started to see how it might happen and actually felt pleased when it finally did. Also complex characters -- many characters who aren't entirely good or entirely bad despite what your first impression might be.
Compelling Storyline: man I can't wait until next season to find out where this is all going!! and I don't know who to root for!
Literary Allusions: if I wasn't sold on it already, the moment the group of main-est main characters named their ship the Rocinante you know I was sold for sure!
Plausible future: I also just really love how it's not the basically kind of fanciful future of Star Trek and/or many other sci fi universes but everything you see is an entirely plausible extrapolation of where we might be without breaking the rules of physics as they are currently understood, as well as plausible political and societal developments. In my own vague idea of a series set in the 100-200 year future I ALSO had always thought of the UN being the world government and big corporations being major political players. Oh that's another thing I liked, where a lot of shows go to great lengths to not call the world governing body the UN but rather something understood to be the same but different, or won't name any current corporations or organizations, in this one you see "fedex" written on shipping containers in space and there are mormons. Space mormons!

Shortcomings: There's really just a few shortcomings I can think of that prevent the show from potentially being GoT-level good (I discount the most recent GoT season in my consideration of "GoT-level good" ;) ) -- (1) while characters who have been well developed and you thought were gonna have a larger role DO very occasionally die, by and large I feel pretty confident that the main characters aren't about to die, and I really think that uncertainly that someone will survive a given incident is part of the magic with GoT. (2) now, I am not craving gratuitous GoT level nudity in order to approve of a series, but when, for example, as a major plot development a character was discovered naked and dead, when they used contrived camera angles or object placements to preserve the body's modesty, it just makes it feel a bit stilted and prudish, and takes your mind out of the storyline itself back into thinking of it as a tv show. Storyline-pertinent nudity souldn't be contrivedly avoided! Don't be so American!

But in conclusion, I gosh darn love this series and if you are remotely into sci fi you should watch it!!


...also is it just me or does that main character James Holden remind me a lot of Jon Snow? (Edit: haha while googling for an official Expanse picture to include here I came across this)


Random Picture of the Day 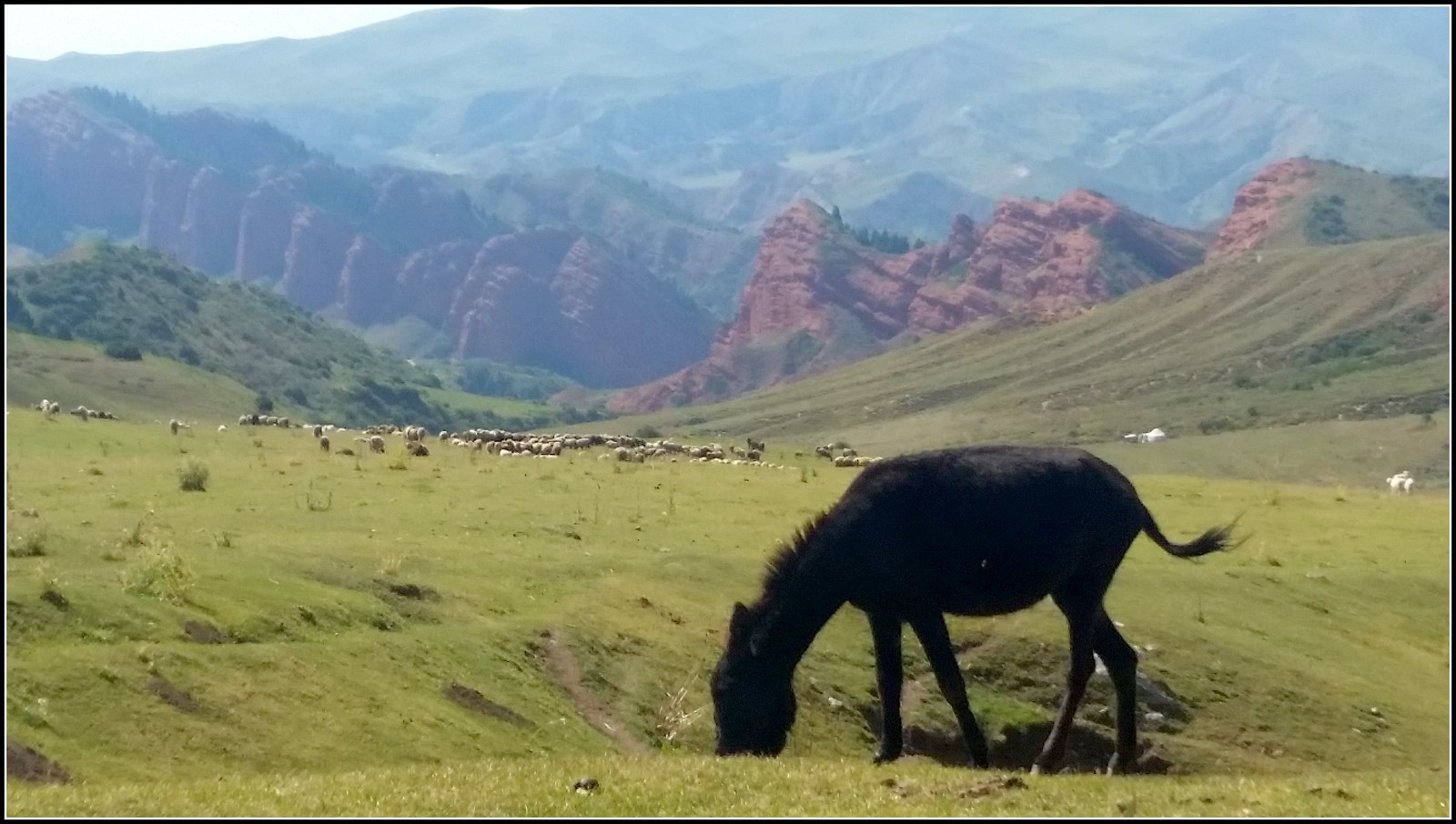 A donkey in Kyrgyzstan. I don't think I've shared this one yet? It's actually my desktop background. At the time, having gotten a new computer just before this project I didn't have much to choose from and it was a picture I had just taken, but I quite like it. Though man I know I recently saw a picture I had taken of a rocket shaped monument out in rural Kyrgyzstan which would be perfect here, but considering all my pictures from more than a month ago have been lost I can't think of where I had seen it, maybe I'm just remembering having seen it before The Loss. ):