I've had a similar conversation about this with several people lately:

You can infuse honey with things like ginger, cinnamon, garlic, chocolate, whatever, and it tastes pretty good and moreover sells very well at farmer's markets and such, and in fact I often see it at farmers markets.

"Well, why don't you do that then?" my friend asks with their eyes gleaming.

"Well it's unethical." I say with a grin like I'm joking, but then when I don't retract the statement they look at me a bit confused.


You see, here's the thing. It's not really, inherently unethical, but it runs up against two complaints for me. First of all, as a beekeeper I have an absolute horror of adulturating honey. Adulturated honey IS unethical -- in many countries with less strict food testing people cut honey with sugar syrup or high fructose corn syrup. You can hardly find pure honey in a big city market in Africa, and China is flooding the rest of the world with exported adulterated honey, and they keep finding new ways to do it to continually fool even high tech testing. If you can't tell the difference, you might ask does it matter? And I would say, yes, it does, because adulteration is inherently unethical ::glare::

Now infusing honey with ginger for example, well, on the face of it is literal adulturation. That in of itself makes it distasteful to me. But if it's clearly labelled as such what's the harm right, I mean pretty much most of making food products is combining things. But that's where it butts up against my second objection -- even knowing what I'm looking for, even knowing when I see "ginger honey!" in a farmer's market it is almost certainly an infused product (does ginger even HAVE flowers?), it often takes some careful examination of the bottle or talking to the sales person to determine with certainty that it is. Your average person by and large isn't going to do these things. They're going to buy a product and say oh look at this delicious chocolate honey yeah I guess the bees visited chocolate flowers or something (which, I guess cocoa plants do probably flower?), or more insidious is infused honeys that plausibly could the actual honey, peach, apricot, and most often orange. When people are buying an infused product, even if it is good and tasty and tehy're happy with it, and even if it says its infused in the small print on the back, but they don't realize it is, my professional pride in high quality unadulterated honey is deeply offended.

Obviously I could make the product and just very very clearly label it as what it is, maybe even use it as an opportunity to inform the consumer about what it is, but it's just I guess professional pride gives me such a very very strong aversion to adulteration I just really couldn't bring myself to do it.


A sort of related thing is infused spirits. It's a commonly known "life hack" to put skittles in vodka to make a flavored liquor. I've heard countless stories of people in Eastern Europe putting various fruits in vodka over winter, a practice that no doubt has replaced traditional liquor making techniques with the advant of generally available cheap vodka. I don't really have an objection if you want to do that on your own time, by all means have fun with alcohol and experiment. I was recently at a corner store near here though and saw some gin on the shelf with the name of one of the local berry farms (there's several in the area!). Having a strong interest in distilling, I was excited. Do they do distilling there??? I carefully examined the bottle. It was by no means self evident but eventually I found some small print noting that they created their product by infusing berries into grain alcohol they had acquired from such and such distillery. FOR THE RECORD proper gin or any other true commercial liquor* fit to be marketed with a straight face by an artisan food maker is made by combining the products during the fermentation phase prior to distillation. Infusing after distillation is... cheating! A cheap trick!

*not to be confused with liqueur which IS generally traditionally flavored post-distillation.


Much more alarming to me, there's a guy around here producing "honey mead liquor," as the label says, and its a very professional looking label. I haven't seen it for sale but I've encountered it being bandied about several places within the beekeeping community. Its really quite good. I was actually wondering what his secret was. And then I heard, through the bee grapevine, APPARENTLY he is, you guessed it, making up some kind of honey juice concoction thing and... then combining it with grain alcohol he has purchased from some commercial distillery. Which I guess is why he can't actually label it merely as "mead." But, as you can imagine, despite that its a very nice tasting thing, I am morally outraged.


Now, I realize I may sound like a crotchety old man about all this, but, I don't know, professional pride is a thing. I believe in pure products made the proper way, and not intentionally or unintentionally misleading consumers.


Only Vaguely Related Picture of the Day 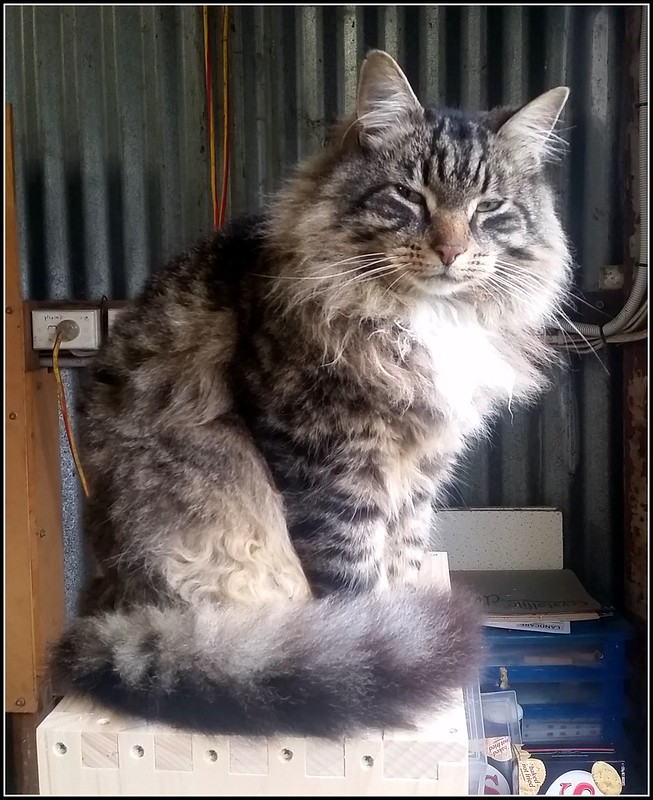 
I'm curious to hear if any of the rest of you have professional pride related moral high horses such as mine but as pertain to your own industries?