Waiting for the ferry off Tasmania now. We made the mistake of arriving an hour and a half before boarding and can do nothing but wait in the car till then now. So the perfect time to write another update on my phone!


Friday, February 16th - since my work is half an hour in the direction we planned to go and we were pressed for time, my parents picked me up right from work at 4pm, leaving my car there for the week. It was about an hour and a half drive to Queenscliff at the far end of the Bellarine Peninsula, through country roads. We drove on to the second-to-last ferry of the day at six. My parents reckoned they hadn't actually driven on to beers before, which I was shocked to hear. They enjoyed the novel experience. Kind of glossing through this part of the trip since I described this leg in detail in last travelog. This ferry crosses the mouth of the huge bay Melbourne is at the end of. Last time I saw the larger ferry Spirit of Tasmania crossing our path on its way out the bay to Tasmania, which I note because we later rode it here and am about to board it again. Didn't see it on this occasion but instead we saw a cruise ship of the P&O line which I believe may be the exact same cruise ship that was at historic Port Arthur on the south coast of Tasmania at the same time as us a week later.

Arrived in Sorrento, had noodles, marveled that at 7pm on a Friday this beachfront town with a lot of restaurants already seemed dead. Drove around the next big bay to the east, West Port Bay, which again I described last entry, but continued further around into territory that was new to me finally. By this point in was dark but we found our way to a little town called Coronet Bay on a point in Western Port Bay. This airbnb was a dedicated rental house. To hear the little things my mom pointed out as potentially complaint worthy made me anxious about all the little things in my house but maybe she was pointing them out for my edification. One thing that was definitely a bit weird though was while the beds had comforters and pillows on them there were no sheets on them at all, Just comforter over bare mattress. Weird. 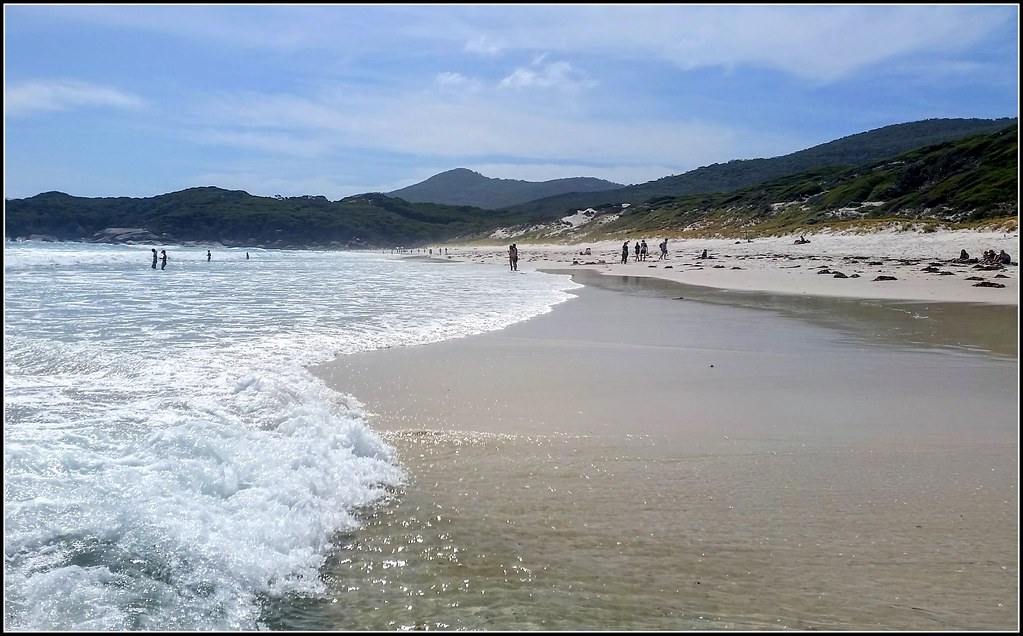 Saturday, February 17th - woke up to find people across the street also looked like they were packing their car to leave a bnb, and the only activity visible in town appeared to be other tourists who had just been there the night. Being as its just a small community of vacation-home looking houses on sandy soil with no industries or obvious forms of employment around. It has no marina though it fronts the big bay.

We headed south to the sea coast and then east along the coast through beautiful seaside countryside. Our goal, Wilson's Promontory, known throughout Australia as "the Prom." The Prom is the southernmost point on mainland Australia. Unfortunately I found when we arrived that the actual point is a two day hike from the nearest road. Bummed I couldn't just hop over to it but kinda excited at the same time since I AM a big fan of hiking and if I can hike there amd all the 4×4heads are gonna have to hoof it themselves to do the same. And in fact there's a bunch of hiking only trails around "the Prom," so I'm definitely looking forward to coming back and camping!

We did a short day hike around the area of the main visitor center (at "Tidal River") and then went to the nearby beautiful white sand beach of "squeaky beach" (pictured), where of course dad went swimming. While eating fish and chips at the visitor center, a kookaburra swooped in and snatched away half dad's fish just as he was bringing it to his mouth! Right out of his hands. Interesting fact: a kookaburra is in fact a kind of kingfisher. And THEN! As mom was holding out her burger towards dad and saying "here have some of mine" a SECOND kookaburra swooped in and took a significant portion of her burger!!

Also we talked to a couple who said they had come here on their first date thirty years ago. To which I immediately realized the obvious American-centric joke which hadn't occurred to them --they met at the prom! They were prom dates!

Anyway we spent way too little time there but it was enough to give me an idea how to plan a future trip there (camping!), and then we had to beat feet back the way we came so we could see the penguins that night

But since we just boarded the ferry I'll save that for another entry!