Picking up the recent travel adventures where I left off in Wilson's Prom, this time from the comfort of my computer at home.

Saturday, February 17th - From the beautiful and lush Wilson's Prom peninsula we headed back up through beautiful countryside which reminded us of the Point Reyes area of the California coast north of San Francisco (how many readers are actually familiar with that area?). Throughout the trip we were constantly remarking to eachother about what part of America a given place reminded us of. I think we had one for Coronet Bay where we had stayed that night but I already forget.
At one point headed up the coast we were driving in an area where the beach was just a hundred meters from the road but obscured by a big natural berm, probably a sand dune pushed up by natural processes. At one point there's gap in the dunes and the breaking waves can be seen through a railroad trestle that connects the top of the berm. We all declared "it's trestles!" referencing a famous surf beach near home in Southern California that similarly appears from the highway through a trestle ... and I have somehow never been to despite spending most of my life near it!

We proceeded onto Philip Island, which is connected to the mainland by a very short (640m) bridge. The island itself seemed to have a particularly dense concentration of little towns. We proceeded to the town of Cowes (pronounced "cows") on the north side for dinner before penguin viewing. It was a very cute little town with elegant trees lining the main street into town. Many restaurants there. Because penguin viewing is the main draw of the island and starts at sunset, Cowes must have a really unusually high demand for dinner compared to anywhere else. Had dinner at an Italian place. No kookaburras stole any of my parents food on this occasion.

And then it was penguin time!! Fortunately dad had ordered tickets online a few days before. If you plan to come see the penguins it appears you need to buy your tickets a few days beforehand. Around 7:30ish we were part of the long parade of cars entering the penguin viewing park on the west end of the island. Once we entered the facility one travels down raised boardwalks to the beach. Before we even got there we saw an echidna (my parents' first) (the Australian porcupine for those not familiar with Australian fauna) in the grass off the boardwalk, and a swamp wallaby. Later we also saw a possum. It had not occurred to me that we could knock so many things off my parents to-see list here at once!
On the beach they had stadium style concrete bleachers facing the waves! A ranger addressed the gathering seated crowd with the rules (no photos after dark!) and general explanations, and also it turned out she was aboriginal, though in the fading light from where we were seated we could barely make out any distinguishing features of her. Anyway, it turns out the little penguin, the world's smallest penguin species, always returns to the same beaches where they have their nests. They may come back nightly, or go out for nearly a month and travel a hundred or more miles before returning to exactly the right spot. They used to nest all over not only Phillip Island but much of the south coast of Australia, but many of their nesting sites have been completely disrupted by human development (I hear you can even find sad little penguins trying to nest right in the downtown waterfront of Melbourne).
The first penguin emerged around 8:50 if I recall correctly, followed by just a handful over the next fifteen minutes, after which point the majority of viewers started to get up and leave. We stayed longer and more penguins began to emerge but not quite the overwhelming onslaught we had expected (promotional material proclaims 30,000 penguins come out a night! ... maybe on the whole coast?), though people watching off to the side of the bleachers told us they were coming out in groups of 20 way off in the dark (the bleachers of course had floodlights illuminating the beach in front). When we finally left the bleachers we found that one could see lots of little penguins scurrying up the paths among the grassy dunes from the boardwalk. Couldn't get a picture since it was verboten but the penguins were very cute. 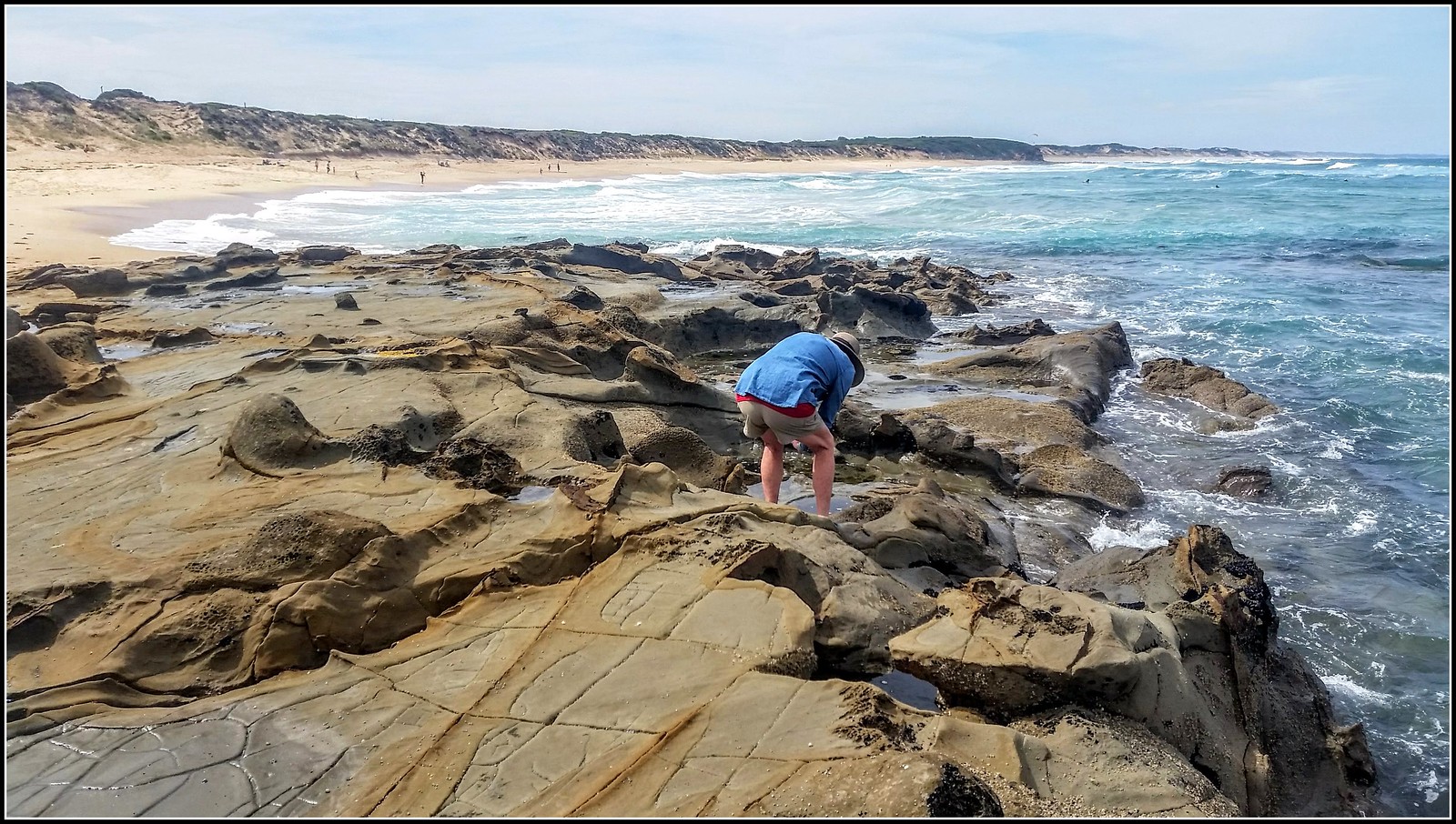 (okay my second google map won't imbed for some reason but if you want to see it, this is the map that should be here)

Sunday, February 18th - Sunday we headed to a nearby point sticking out into West Port Bay, from which you get a good view of the broad bay and big island in the middle. I really want to visit the island. One can go hiking on it and I am now determined to do so. Then we headed back down to the beach we had called Trestles, poked around the tidepools there (it was a nice sunny day) dad was totally about to go swimming until we saw this sign. From there we bounced back to Cowes and had lunch at the delightfully named Mad Cowes Cafe. Then went to see the penguin facility by daylight (its free admission during the day) but there really wasn't terribly much to see during the day. Penguins and penguin chicks are in their burrows but the best you can manage is a vague peek at one that's peeking out at you (so don't think you can be cheap and come when it's free instead of paying for admission in the evening! not comparable!)
We also went for a nice walk along the rugged cliffs at the very furthest west end of the island, at a centre called "The Nobbies" that I think is mainly an education center for kids about Antarctic stuff. We didn't really spend any time in the centre though. Waves were crashing impressively against the outlying rocks (the nobbies themselves I suppose) here.
Also of note, this whole Western quarter of the island was once a commercial housing development called "Summerlands," but conservation groups apparently bought out the development company as well as every property that had already been sold, and demolished any buildings which had already been built, to restore the area to natural habitat. Good on ya guys.

By now we were running low on time for our evening ferry departure for Tasmania, so we hoofed it back to Melbourne. We observed that Melbourne definitely has oozed further east than west. If it had oozed as far on the west side it would practically be connected to Geelong. Basically once we were past the swamps immediately north of Western Bay we were driving through city the rest of the way. The ferry dock was on the waterfront closest to downtown, in what appeared to be an older part of town. On one side of the pier was I believe the Queen Mary II, which was only a little bigger really than the big red and white Spirit of Tasmania II.

Aaand the ferry ride sounds like the beginning of a whole new entry! I promise Tasmania will be more interesting than this bouncing around an obscure corner of Victoria entry. ;)