Monday, February 19th, Devonport - the sky is slate grey and casts a dreary industrial look on the town around the waterfront. Across the estuary the Spirit of Tasmania ferry we'd recently debarked looks like a giant toy with its discordantly optimistic red and white. I'm standing under giant bronze statues of flowers. There's a nearby explanational sign, and informational signs always attract me like bees to a flower. These poppies, it informs me, are a monument to the importance to the local economy of legal poppy farming -- under close government regulation they raise opiate poppies for use in commercial pharmaceuticals. "Such sauce!" I say to mom. Dad returns from his quick dash to a better vantage point to photo the ship.

Next stop, Ulverstone! Mission: Scallop pies! My coworker here (not Cato, though I'm sure he'd loorve a scallop* pie) is a native** Tasmanian*** and had informed me the first thing she always does when getting off the ferry is proceed straight to Crusty's Bakery in Ulverstone for a scallop pie. Ulverstone is only about twenty minutes west along a coast dotted with little seaside towns interspersed with farmland. We found Ulverstone to be another one of these little seaside towns built up around an estuary (at a population of 6,985, wikipedia informs me it's "one of the largest towns in Tasmania"), with several bakeries on the main street buzzing with business like a beehive on a sunny morning. Beside Crusty's was one of those grand old hotels with beautiful gilt second floor wraparound verandas which we would see many of throughout the island. At Crusty's we got one scallop pie and two pasties ("pahsties," a thing I fondly remember from Ireland but Not A Thing in the States). The scallop pie was.. interesting but not my favorite.

*As noted last entry, they say "scallop" not as "scahl-op" as god intended but more like ::does some green room voice exercises before coming back:: "skwau-lope." As the week went on we found scallope pies weren't just a specialty of this bakery, rather all of Tasmania seems to have a thing for them. Later, I asked my friend whom my other friends always bag out for being Tasmanian if he secretly craves scallop pies while living on the mainland, he admitted he didn't actually, to which I declared he was not truly Tasmanian, and he then admitted to being born in Bendigo on the Australian mainland, thus proving the efficacy of scallop pie love as a test of someone's true Tasmanianism.

**My coworker was born in Tasmania, which is not to be confused with being aboriginal. The plight of the aboriginal peoples of Tasmania is truly appalling. By 1876 the last full blooded aboriginal was declared to have died and the government declared they were an extinct peoples and "the aboriginal problem" was over. To this day the perception prevails in Australia that the native people's of Tasmania were entirely wiped out. As it happens wikipedia informs me that one full blooded aboriginal did live till 1905, and of persons who are partially aboriginal the last census indicated there were 23,576 in Tasmania at the 2016 census.
Considering the genocides and forced migrations of the native peoples of Australia happened around the same time as the same was happening to the native peoples of North America, I find it interesting to see how different the cultural awareness of it is. Everyone in America is "aware" that terrible things happened to the native Americans, but its not like here where it is mentioned all the time, most events open with an acknowledgement of the "traditional owners of this land," the local mall has a plaque to them, etc etc. Conversely, I think 99% of the people living in Southern California haven't the faintest idea what the name of the native tribe of their area was (Tongva in OC, though I cheated and looked it up just now, I thought it was the Chumash, who are just north, but vaguely remembered enough to suspect that wasn't exactly right) and probably think of amerindians as something that happened somewhere else.

***While I'm on Tasmanian history, the island was called Van Dieman's Land until 1856, until they changed it partially (largely?) as a branding/marketing move to get away from the terrible Vandiemonic reputation as a harsh destination for convicts (which had just been discontinued). Early references to people living there referred to them as Vandiemonians though, which I think is a fun demonym (a van diemonym?? ohohoho okay okay I'll stop). 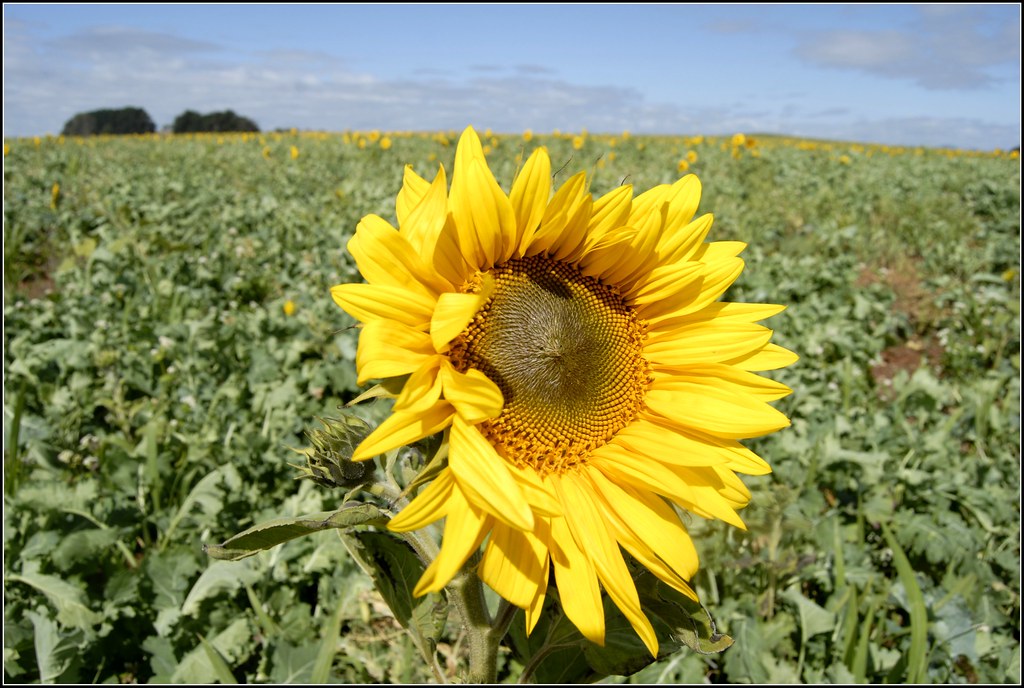 From Ulverstone we set out to continue west through more farmland and seaside townlets until we came to "Fossil Bluff" and "Table Cape," and mom does love a good fossil. We turned off the highway (which was only a curvy two lane thing anyway) to proceed down a windy country road along farms and coastal bluffs. Had to stop at a beautiful field of sunflowers. By now the sun had come out to make for a beautiful scene of sunflowers fields draped over the slopes by the coast. Neighboring fields had already been harvested of a flower crop, but the big signs on the gate declared:
WARNING: DO NOT ENTER.
THIS CROP HAS KILLED PEOPLE!!
O_o. Reading the smaller print one learns that these are the commercial poppy fields! The wording of the sign makes one picture man eating plants in the field but I suppose they mean if you steal poppies to make and use heroin you might die? I feel like the wild claim that the crop will kill you draws more attention to it than a simple "DO . NOT . ENTER" sign would.
Continuing on the pleasant winding road to the table cape we also saw signs for the nearby allegedly famous tulip farms but I don't recall seeing them. And there was a deer farm!! Golly, Tasmania has the most whimsical industries!!
Went on a pleasant walk along a precarous seaside cliff from a lookout point to a lighthouse, but as admission was ($20?) which we felt was steep and we decided not to go in. Then drove down to fossil bluff beach and saw some of the usual million year old embedded shells. I think a sign indicated the actual fossil bluff was a ten minute walk from there but we were getting antsy to keep on moving west at that point.

I almost forgot one other very strong first impression we got. Plastered on walls in the towns, and showing up in the most unlikely places among sunflower (and opiate) fields, there was an overwhelming number of election campaign signs. I swear I've never seen such concentrations of them. And the viciousness of their declarations on rival parties! Sure US state and national elections get nasty but the local elections usually keep the slander to a background whisper, but despite population levels more akin to most place's town elections, it was clear these politicians were out to gouge eachother's proverbial eyes out with their proverbial thumbs. "Liberals" (whom I had to keep reminding my parents are actually analogous to Republicans in America) seemed to have the most signs, but even between Labor and the Greens there seemed to be no love lost, with one memorably sign by Labor saying they promised not to work with the Greens. Anyway, as I said I almost forgot this except just now I checked my newsfeed and saw that the Liberals had won the election and the Greens declared it "the most bought election in Tasmanian history."
I think the vehemence of the politics may stem from the fact that you have this small island with beautiful pristine forests full or rare species, but also logging is the major industry, so the conservatives really really want to support the logging industry and the liberals people-on-the-left really really want to protect the forests. 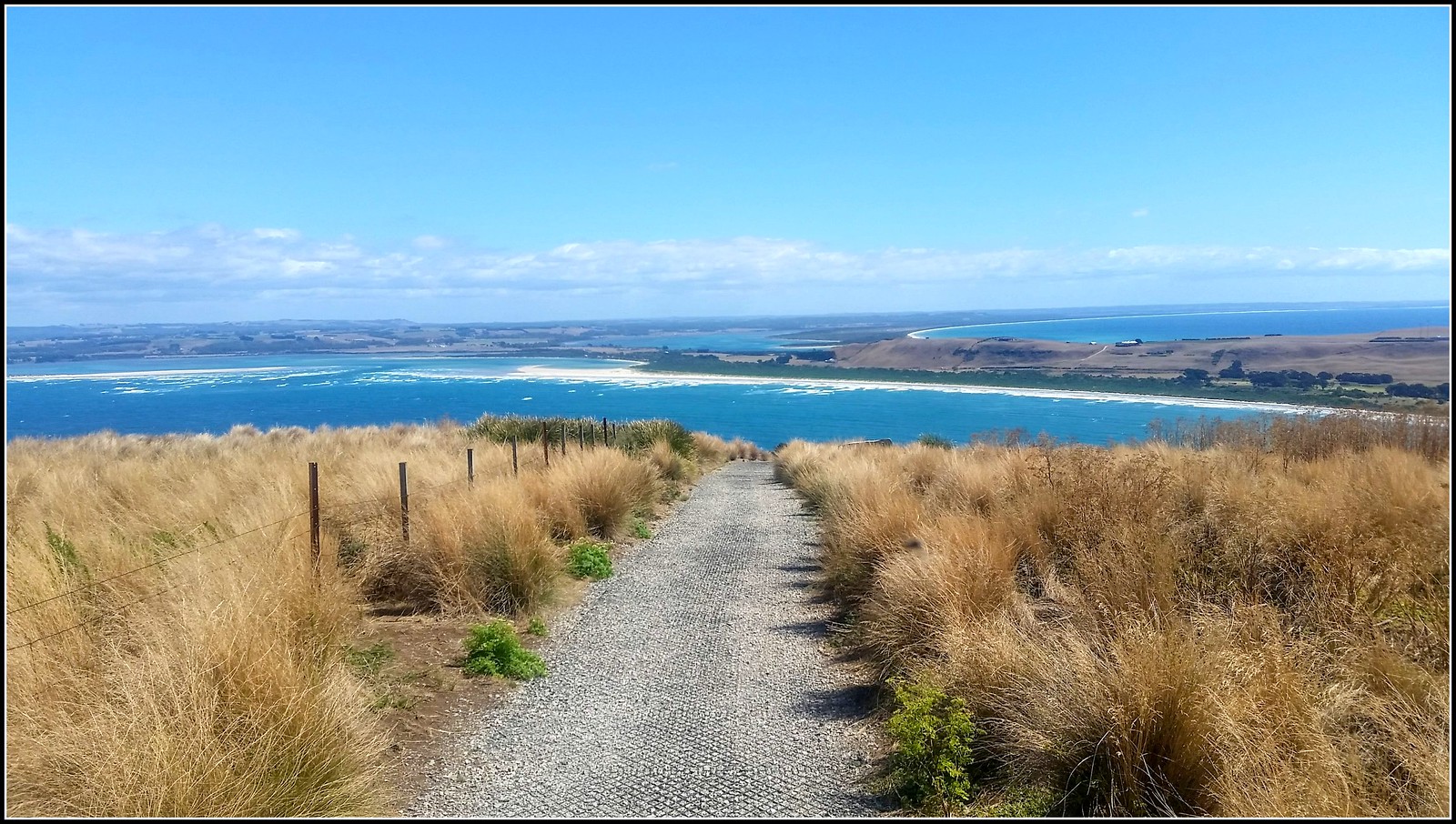 Only about an hour west we reached our destination, the town of Stanley, situated out on a peninsula that had formed behind a volcanic plug known as "the nut." The town itself was really cute, reminded me of a New England fishing village. Apparently a major film meant to be set in the 1800s was recently filmed there since all the buildings downtown look period appropriate.
We took the chairlift up to the top of the nut and went on the very lovely walkabout around the top. Much of it was covered in sort of heath, but one low part was forested and within this beautiful forested bit was saw our first pademelons -- basically smaller more rounded wallebies. Sadly the pad-melons most commonly are seen smashed by the side of the road and as we continued to drive around Tasmania one can gauge how much nighttime traffic a section of road gets by the smashed-padmé-per-kilometer ratio.
At the base of The Nut I had some lavendar icecream which I found remarkably good, and now I wonder why one doesn't see more of this delicious flavor.

That evening we ate at the Stanley Hotel as it was the only place open (I think my parents would have preferred somewhere cheaper, it was a bit fancy, but it was good!!). Also, being the only place open on a Monday night the place was reservation only and after initially showing up at (6?) we had to come back at 7:30.
That evening we went out to see the penguins -- on our earlier penguin adventure we had caught a mention that penguins also show up on the shores of Tasmania and a bit of research had revealed that this was one of the places! The beach did have designated penguin viewing locations and signs once again admonishing people not to take photos of the poor little penguins since the blue light in flashes hurts their wee little penguin eyes. As it happens we were staring into the inky blackness (moon largely obscured by clouds) at a designated location with about a dozen other tourists when a series of bright camera flashes down the path caught our attention. We ventured that way and found a little penguin paralyzed in fear on the path as some ill behaved tourist took a few more pictures.

We then managed to run over no padmes at all on the return to our little airbnb (a custom made airbnb bungalow outside a main house) just out of town. And thus ended a delightful Day 1 in Tasmania!