The Dismal Swamp and Tarkine Wilderness!

Tuesday, February 20th, Dismal Swamp, the Tarkine Wilderness - "Wait, which way is it?" asks dad, looking from the small map to the junction in the boardwalk "this junction isn't even on here!" I look at the map myself and as far as I can tell this junction is indeed not on the map. We are lost literally and figuratively deep in the dismal swamp!

The day at begun at our little airbnb bungalow outside of Stanley. We had only been working up the plan for this day since yesterday and as soon as I saw "dismal swamp" on the map I knew we had to go there. I didn't really care what was or wasn't there, just, why WOULDN'T one want to visit a place called "dismal swamp??"
The weather was sunny, with a cool breeze, which I realized with alarm reminded me of Autumn! If one accounts for the flipped year, February does equal August, so indeed the summer is coming to an end! Mom was eyeing some wild birds out the window "those look like chickens, are they chickens??" they looked just enough not like chickens to make one wonder. Mom got out the bird book and determined that they were in fact some kind of native bush-chicken, I believe?

Our first destination was a coffee shop and bakery in the nearby town of Smithton (once again small, built around an estuary, with a busy little mainstreet), where the woman behind the counter was remarkably friendly. Smithton also had a small museum, which was closed, but we could see through the window the (plastic casts of, presumably) bones of a prehistoric giant wombat (a diprotodon I believe?) , and read the informational sign about it. Also, I think it was in the dismal swamp we learned about it actually, but while I'm on a paragraph about ancient megafauna: you've undoubtedly heard of the Tasmanian devil, you may (should) have heard of the Tasmanian tiger, but did you know there was also a Tasmanian lion (Which for some reason has a separate wikipedia entry under the name thylacoleo! The Tasmanian Lion is believed to have been extincted (extunck?) by the arrival of aboriginals around 60,000 years ago. The last confirmed living Tasmanian Tiger of course sadly died in a zoo in 1933 due to neglectfully being locked out of it's shelter during extreme weather ):< ...and I just learned just this moment that the closest living relative of the Tasmanian Tiger is the NUMBAT, which is the adorable little critter in my default icon!

Next stop, Dismal Swamp!! --Or, as they're making a vague effort to rebrand it, "Tarkine Forest Adventures!" ...what's wrong with "dismal swamp???" Anyway the Dismal Swamp is a privately run "eco adventure" thing. There's 40 meter deep sinkhole (I can't find a good "about" page on the internet but the area of the sinkhole is hundreds of hectares actually I think? its big anyway). One drive up and parks in the car park, surrounded by walls of forest. From the gift-shop / cafe / ticketing area one can take "the longest slide in the southern hemisphere" (110 meters) down to the bottom ... for a hefty $25 roo-bucks. Or one can walk down via the lovely and well-maintained boardwalks, which we did.
Down at the bottom there was a network of these nice boardwalks and it was really lovely being deep in such a delightful swamp. They had lots of informational little signs about the trees and plants, which mom in particular was really excited about. Another remarkable thing I learned from the signs was that there were crayfish who lived on the muddy swamp floor here and made themselves little crayfish towers. We saw their towers but not the crayfish themselves. We enjoyed strolling around the swamp for maybe two hours before dad started to get antsy that we needed to keep a move on for the rest of our planned perambulations. As noted at the beginning of the entry, we found we got a bit lost trying to navigate the unintentionally labyrinthine boardwalks on our way out, but not too badly. All in all I loved the dismal swamps, they were every bit as delightful as I had expected, and more!! 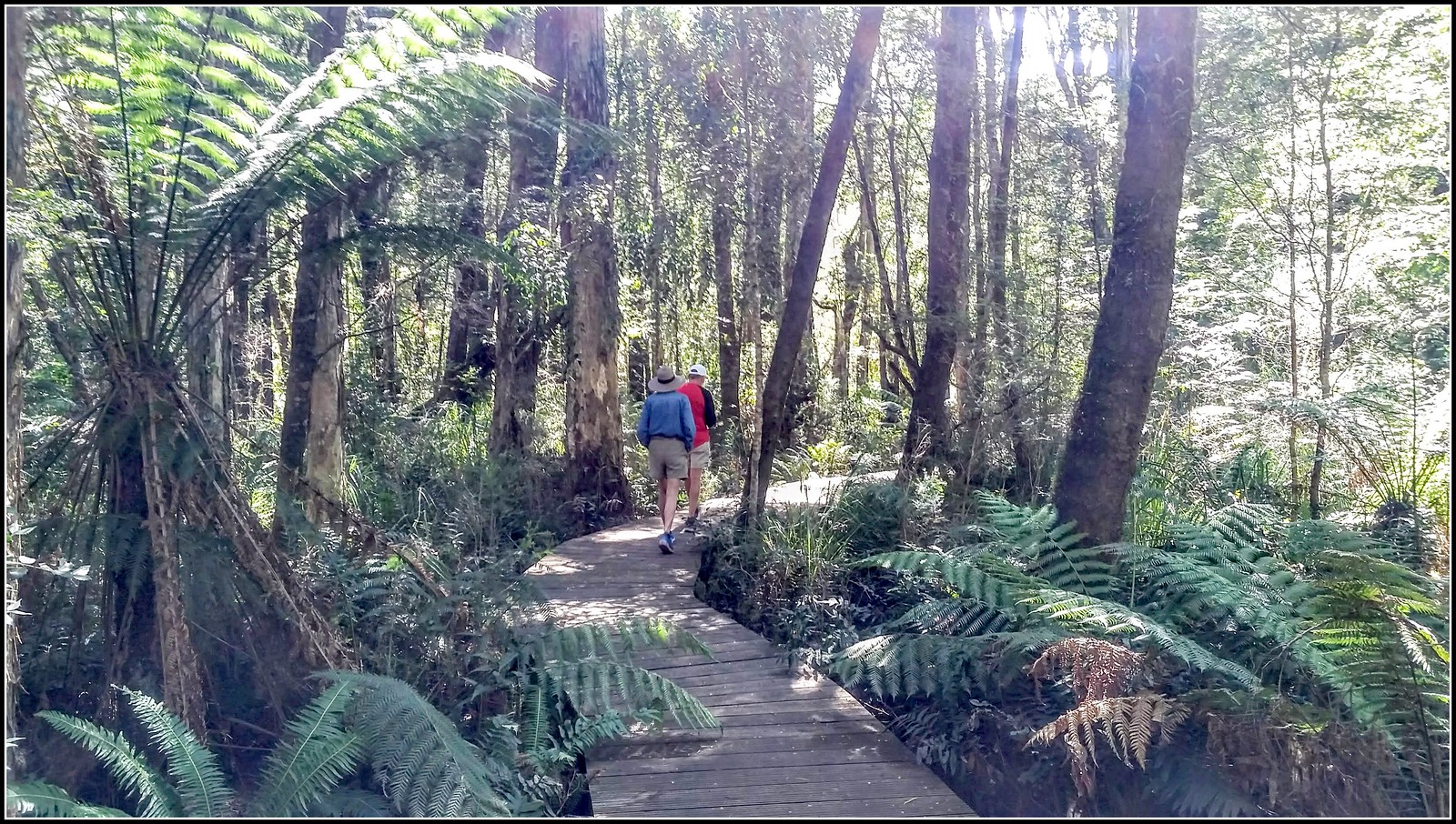 From there we booked it to the west coast of the island, through mostly bucolic farm countryside. Visited the coast itself and beheld an isolated and idyllic surf beach, but being pressed for time we only looked at it from the car park and got back on the road. Headed south down the coast it was clear this is not the highly populated part of the island, as for miles and miles we saw nothing but brush around the road, and the roadkilled-padme-per-kilometer index was at almost zero. Despite this we saw fairly regular signs advising to be careful not to run over devils from dusk to dawn, as well as signs that appeared to warn of kangaroos lifting one's car, no doubt after having become addicted to human-introduced crossfit ::shakes head sadly::. On our whole coastal drive we only drove through one tiny micro-townlet, it really felt like a very remote and unpeopled coast.

After half an hour running down parallel to the coast we turned inland (apparently the road continues to a miniscule former town that was once the port to a now closed mine and is now "just a collection of shacks." Our journey inland back into the Tarkine Wilderness led us into alternating forest and cleared land, with signs proclaiming we were witnessing managed sustainable logging or some such. Eventually I believe we entered a protected state forest and the huge surrounding trees were uninterrupted. We also passed several turnoffs just off the road with pallets of beehives on them, which of course we were intrigued to see. The hives had a lot of supers (additional boxes) stacked on top which would seem to indicate they were doing really well, and indeed they all seemed very busy at the entrances. Interesting to note, I'm not sure if anyone reading this is interested in the obscurities of comparative beekeeping, but I was interested to note while most commercial beekeepers in at least the states prefer to give the bees about two "deep" boxes before stacking shallow honey supers on top these operations seemed to use entirely shallows. I've been thinking about doing that if I were to god forbid restart, since I don't like having differing box sizes and am currently using all deeps, which get gosh darn heavy when full of honey.

There were many many short walk options within the Tarkine Wilderness loop, but we had to zip right past most of them due to our ambition drive plan. Maybe some day I'll get back! ::looks off whistfully into the distance:: We managed to stop at a nice lookout point, and planned to stop to see a "flooded sinkhole" but accidentally zipped past it and there was nowhere to turn around. We did stop at the "Trowutta Arch" though. It consisted of a pleasant half hour walk through what an informational sign described as, I swear, "calidendrous," but I'm feeling a bit consternated because I wanted to double check the spelling and no variation comes up with ANY hits of any kind on Teh Google. But according to the sign this word means "beautiful or park-like forest" and referes to the wide airy space between the trees here under the canopy high above. It was indeed well beautious.

The "arch" it turned out was two side-by-side sinkholes which were connected by a big hole. One sinkhole was filled in allowing access and the other had a pool of water in the bottom. Pretty neat!

From there we more-or-less hoofed it back up to civilization back at Smithton, and used main roads (such as they are in Tasmania) to get to our destination for the night about two hours away. First we traveled east along the coastal road we had come west on and then turned south, and noted that the padme-roadkill-per-kilometer was extremely high (like double digits) on this main corridor in the "relatively" densely populated north. When we got further from the coast it got less populated again and finally just as the sun was settomg we rolled into the little mining town of Waratah which seemed a bit isolated in the mountains. It was both cute and visibly run down, and had pleasant looking ponds right in the center of town. After we established ourselves in our airbnb (a little house that had been brought up to good repair and set up seemingly expressly for this purpose), inspired by platypus crossing signs we went out to see if we could see platypii in the ponds. Sadly no luck, I think the moon was mostly behind clouds again, I remember it being VERY dark. We stumbled through the darkness back to the house to watch some Olympics instead.

In the morning would we discover we had been on the edge of a precipice? Would we figure out why the famed "Cradle Mountain" is so called? Find out next entry! :D