From Precipice to Pinnacles!

Wednesday, February 21st, Waratah, Tasmania - We woke up to find ourselves on a precipice! Right in the very middle of town! The town of Waratah, it seems, is built right around a chasm, with a waterfall cascading down into it, right in the middle of town! Apparently the early pioneers saw this chasm and thought "ahah, we shall harness the mighty power of this convenient waterfall to mill osmiridium!" Which totally sounds like a made up mineral used as a mcguffin in a movie or game, like the "unobtainium" in Avatar. But compare this impressive old photo of their mcguffin mills to the previous link showing it now!

Our airbnb had actually been a few blocks away from the abyss, so we didn't wake up just beside it exactly per se. But it was still a bit of a surprise. We had headed off in search of "downtown" for some coffee, and found instead a giant chasm where downtown should be. Though the town had obviously seen better days, it still had another one of those grand old hotels, looking much as it had in ye olden days. Just beside the hotel was a rather funny cafe -- "the MUSH Room" was in a rather nondescript but oldish looking building, inside the decorations were very eclectic, but what struck me the most was the wide open kitchen looked like it had almost nothing in it. Like a coffee machine and microwave or something. It seems a bit odd. Also there were pictures of mushrooms all over, and books about mushrooms sitting around. Originally I was just gonna run in and get a coffee, and mom had come in with me, but we looked at eachother and said "dad needs to come in here!" because he's rather a fan of mushrooms. While waiting for my coffee we got to talking to a nice couple who gave us some more tips on things to see (though I think they themselves were only in Tassie as tourists?).

From Waratah we headed to Dove Lake, about an hour toward the middle of the island, through mostly forests, land cleared by logging, and replanted plantations. Dove Lake is near (at the base of?) Cradle Mountain, which I've gathered is one of the most famous destinations in Tasmania. I still don't really quite see how it looks like a cradle though. At the visitor center car park we had to park in the overflow parking lot it was so busy. One can drive to the trailhead parking lot sometimes if it's not too busy, but it was too busy on this day so one had to get a bus up from the visitor center. About twenty minutes on the comfortable bus (and they run like every five minutes) winding up a beautiful valley with several stops at different trailheads. Dove Lake is the end of the road and I'm not sure anyone on the bus was going anywhere else. From the trailhead start one has a good view of cradle mountain just behind the lake -- there was even a sign with a bracket to guide you to take the classic picture of the scene ... which I declined to take because it seemed way to cliche (why take a photo a million other people have taken?). Instead I took a picture of the big drones prohibited sign, thinking "what a world we live in, where people have to be warned to keep their flying robots at bay." 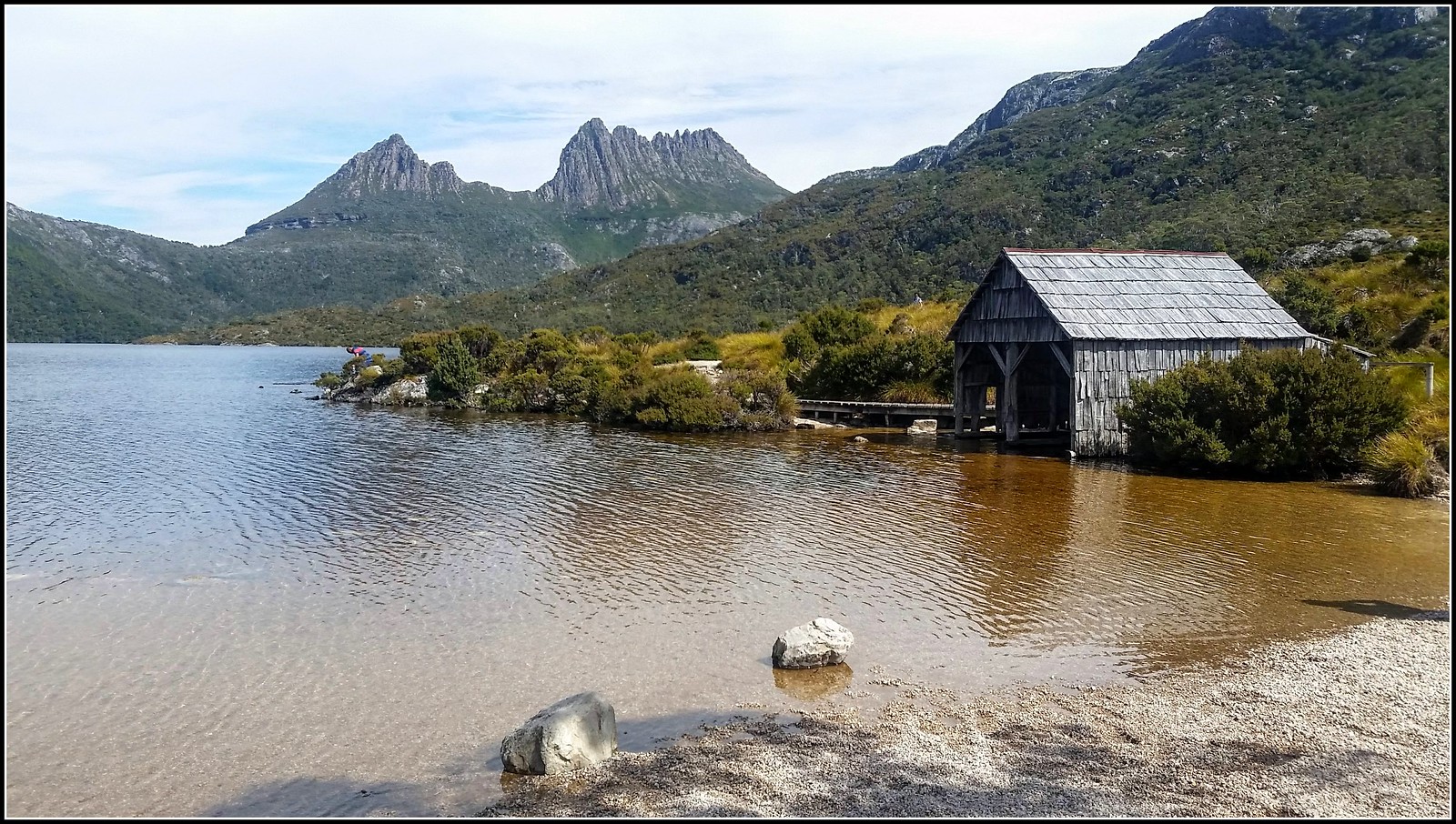 The hike around the lake was a very lovely two-hour-ish hike, extremely well maintained. Large parts of it were on boardwalk, in places over the lake itself where the bank rose basically in a cliff around the lake. One can go on further loops to make the hike even longer if one so desires. Also I learned from signs in the vicinity that there's an epic transtasmanian "Overland Track" hiking trail that begins here and crosses most of the relatively wild and undeveloped southwest of the island. Something to potentially do some day!! Also the every popular wombat poo track ... I think some larrikan just stole the L from "wombat pool" ;)

After this delightful hike we tried to visit the interpretive center but it had closed at 3 and we arrived at 3:06. While waiting for the next bus from this stop we went on another lovely short loop walk. Finally got back to the main visitor center hoping for a snack at the cafe ... only to find IT closed literally a minute before we arrived at 4:01. Such sauce. This is the most popular tourist destination in Tasmania, there are five more hours of daylight, and everything is shutting down before normal business hours are even up? WTF Tasmania.

From Dove Lake we headed off to that ever popular must-see, Zeehan. Okay maybe not but my coworker is from there so we thought we'd swing through. It was about an hour and a half away, through a series of small mining towns as the road wound around small mountains. At one point we were alarmed to see a car protruding just off the road from a small gully! It was so fresh looking our first instinct was to pull over and see if someone needed assistance, but then we noticed the tires were gone and wheel mounts rusty. We hypothesize that the car really did crash there, but rather than tow it out the local council opted to keep it freshly painted as a clear warning to passing motorists to be careful. 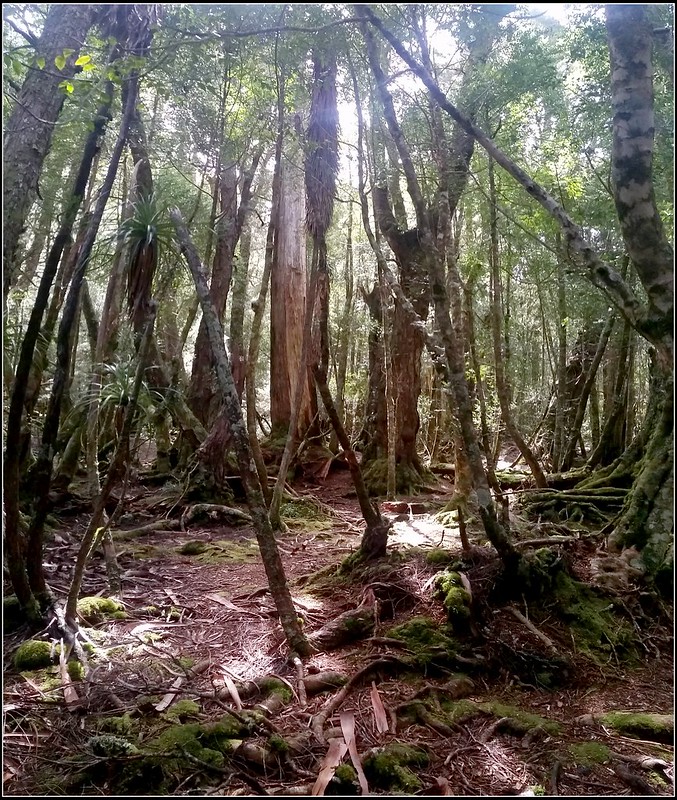 Here's a calidendrous bit of forest on the Dove Lake loop

Dad's search for accomodation in this sector had found slim pickins, but eventually he had called the local pub (called a hotel but usually they don't actually have accomodation) on said coworker's recommendation (not that she _recommended_ it, just that it was a local accomodation possibility) and it turned out they could put us up in a little miner's cottage next to the hotel! How quaint!
The hotel turned out to be yet again one of these grand old 19th century gingerbread edifices, which seemed a bit out of place in what was obviously a down-on-its-luck former mining town. The hotel bar was full of "tradies" in their dirty high viz uniforms (Australians in any job that even remotely resembles blue collar seem to inevitably be wearing flourescent high visibility uniforms), the restaurant room was a cavernous hall that seemed to dwarf the few tables in it. The menu had a surprising selection of chinese food on it, clearly they had a chinese cook. Food was a very long time coming but that seemed entirely in keeping with this sleepy backwater of a place.

Back at the cottage, another evening of watching the olympics. Doping in curling? Really Russia?? Really??? Even other curler's were like "uh, WHY??" 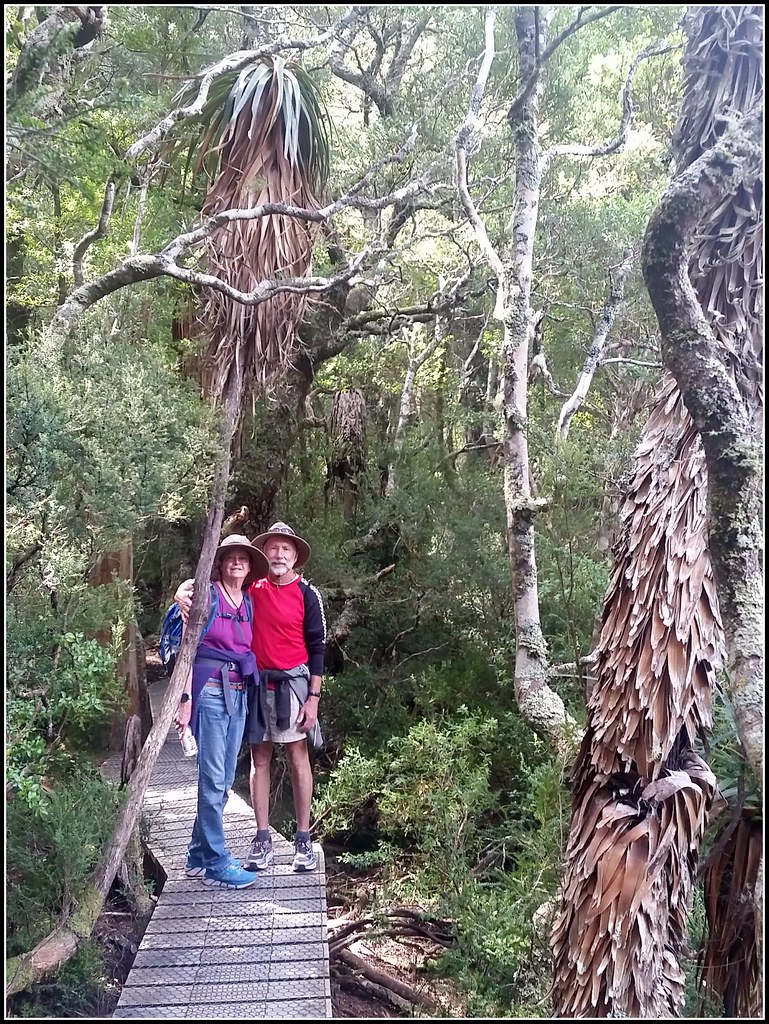 Mom and dad on the Dove Lake Loop