Saturday, February 23rd, 1856 - the small schooner comes into the cove and luffs up, the small experienced crew needing just a few gestures from the captain for directions. Amidships the prisoners are lined up on deck, their chains clanking, under the supervision of red coated soldiers. The forested hills surrounding the cove are starkly beautiful, but also cold and imposing. From the jumble of buildings that make up the penal colony a longboat rowed by prisoners is making its way to the boat. Murray looks at the grim faces of the rowing prisoners as the longboat comes up to take a line from the schooner and tow her in to the dock.
"It can't get any worse" Murray remembers thinking wryly when he'd first arrived in Australia, "I've already been sentenced to transportation for the term of my natural life!" But he was wrong, it can always get worse. The convicts laborously towed the schooner in to Port Arthur, a place of secondary punishment.


Friday, February 23rd, 2018 - the cruise liner P&O Pacific Jewel comes into the cove lets its huge anchor hurtle down into the water. The passengers line the rails admiring the starkly beautiful forested hills, and point at the ruined buildings of Port Arther. After a few minutes the tenders are ready to ferry interested passengers in to the dock. As the geriatric passengers are helped onto the floating dock they are greeted by smiling guides. Welcome to Port Arthur.

"Hey, isn't that the ship we saw earlier from the Queenscliff ferry?" I ask my dad, pointing at the white cruiseliner out in the cove. Later discussion with self-confessed shipnerd

wantedonvoyage confirms it probably was. We had driven here from Hobart, about an hour and a half across a coastline that was a jumble of inlets and peninsulas, and across the tiny neck of land said to have been guarded by chained dogs to prevent escape from Port Arthur, to arrive here at this most famous of penal settlements.
Port Arther was "a place of secondary punishment," meaning that if someone had already been sentenced to be transported to Australia and committed another crime, they got shipped here. As well though persons guilty of murder and other serious crimes could be shipped directly to Port Arthur.
And if someone shipped to Port Arthur needs to be punished yet more? A "Separate Prison"on the panopticon design was built at Port Arthur where the inmates permitted no contact at all with eachother and even the guards didn't talk so there'd be no human interaction at all. And if that's not enough? It can always get worse! Further punishment for these inmates would consist of being locked in a dark closet sized room behind several big doors so there's no light or sound. And after that? They found they had to build one of the world's first psych wards when this treatment proved capable of driving people insane.

The area is starkly beautiful, with its steep forested and mist shrouded mountains rising from the sea and numerous islands, but I gather it wasn't a very fun place to be sent as a convict. Aside from generally cold weather, the completely alien plant an animal life from their home, with the sheer distance from their home, must have made it feel like today's equivalent of being sent to Mars never to return. The prisoners worked at various industries, timber cutting and sawmilling was a major one, and logs were transported in the area on a tramway pulled by convicts. Among the other industries, they also had a shipyard and built boats until they were forced to close it -- because they were successfully competing with other commercial shipyards that actually had to pay their labor. 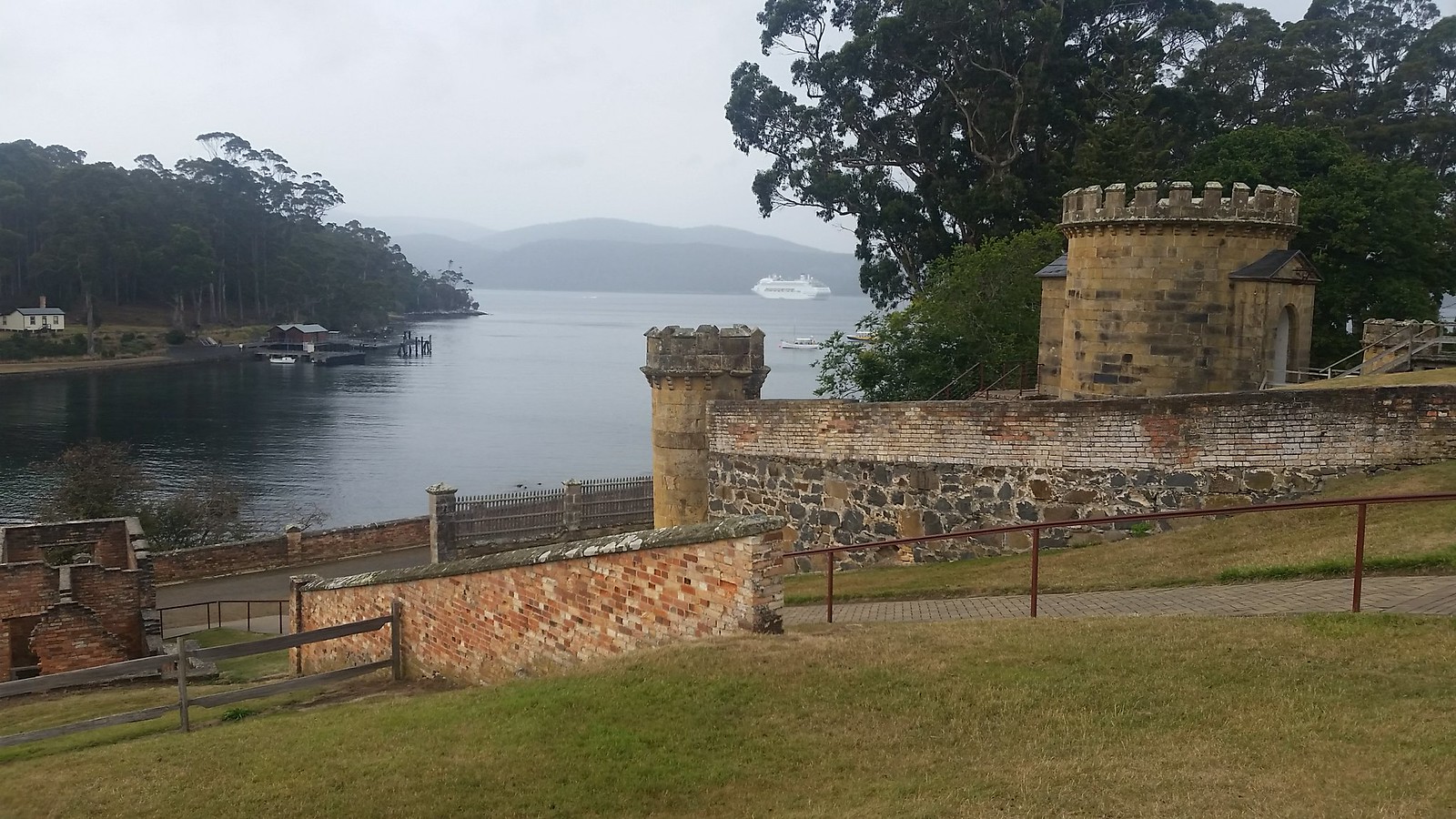 We spent the entire day looking at Port Arthur. As it came time to go I had one last place I wanted to visit. Behind a hedge we found the quiet and contemplative memorial garden, with a reflection pool reflecting the empty shell of the former visitor cafe where 22 people were shot in the space of 15-30 seconds on April 28th, 1996. Nearby a plaque on a small obelisk contains the names of the 35 fatalities in the Port Arthur Shooting. After this shooting the Australian government imposed strict gun controls and there hasn't been a mass shooting in Australia since. This was all the more poignant since it was coming just a few days after the most recent school shooting in the United States.
One other thing that I've noted about the Port Arthur Shooting -- the shooters name is never mentioned. It is known, it's in the wikipedia article, but I feel like whereas in shootings in the states the shooter's name is emblazoned across all the headlines, a sort of damnatio memoriae has been generally agreed in this case.