Saturday, February 24th, 2018 - We awoke to the first rainy day of our whole week in Tasmania. People say "it's cold!" down in Tasmania and allege the weather is much worse, but from my brief experience, we had a solid week of lovely sunny days in Tasmania whereas at home in Victoria I don't think we've had more than three days of sunny weather in a row all year, and even three in a row has happened maybe once or twice. I asked friends back home if they were getting the same week of nice weather and they said they were not, so there you have it, weather in Tasmania is great, case closed!

We'd spent the night at an airbnb in a rural area on the peninsula between Hobart and Port Arthur, in this case a woman was airbnbing out a self contained section of her house. She was very nice. Mom wanted to visit with the farm animals and chooks (chickens) said to be on the property but in the pouring rain it wasn't very appealing to go mucking about. Well for some of us. For my dad, there was one thing he wanted to do: go swim in the ocean!!
Following directions from our kindly host, we proceeded to nearby Pipe Clay Lagoon, which as were driving up beside it appeared to at the time consist of mud flats and/or a centimeter of water with happy water birds walking around looking for tasty snacks. What was really kind of neat though was on the sand bar section between the lagoon and the sea, there was literally no road but one drove on the sand (on the lagoon side) and there were houses on the sand bar whose driveways just went into the sand. Our host had mentioned that at high tides the water is up to the bottom of the driveways. Guess one has to plan one's comings and goings!
Because it was still raining, when we parked and walked to the sea-side there was no one at all on the beach there. Dad declared the water to be (62? 65f?), which is actually similar to the ocean water temperature in California, in which he swims alll the tiime. So he went in and soon he was just a distant splish splashing arm. While he did this mom and I strolled up the beach looking for keen shells. There was quite a large amount of nice shells on the beach. Also the boiler of a ship that ran aground there in the 20s or thirties I believe (there was an informational plaque but I don't actually recall the date).

By and by dad returned, invigorated and happy. He had swam in the ocean at the southernmost point any of us has ever been (save for Port Arthur the day before which looks like it has a few kilometers southing on this place but hey thats quibbling)! Now he was feeling celebratory so we decided to look for a nice place for breakfast. We had noticed on the maps a canal that appeared to not quite cut through a narrow neck in the peninsula and decided to investigate!! While so doing we found a nice restaurant overlooking the canal and settled in for a rather fancy brunch (at first I mom and I were thinking it looked a bit fancier than our usual lunch budget, but like I said, dad was feeling very festive - "it's our last day in Tasmania!"). While there we learned the canal had been built (in the 20s? 30s? I'm just gonna go ahead and assume every date I can't remember falls in that area) after intense lobbying by local farmers who wanted to I guess shorten the shipping route to bring their products to market in Hobart by boat (though looking at the map it really doesn't look that far around). After building the canal at a fair expense it was only briefly operational before storms silted up the seaward end of it, and constantly dredging this build-up proved unfeasible. So today it's just a canal to nowhere, with the seaward end completely built-over. 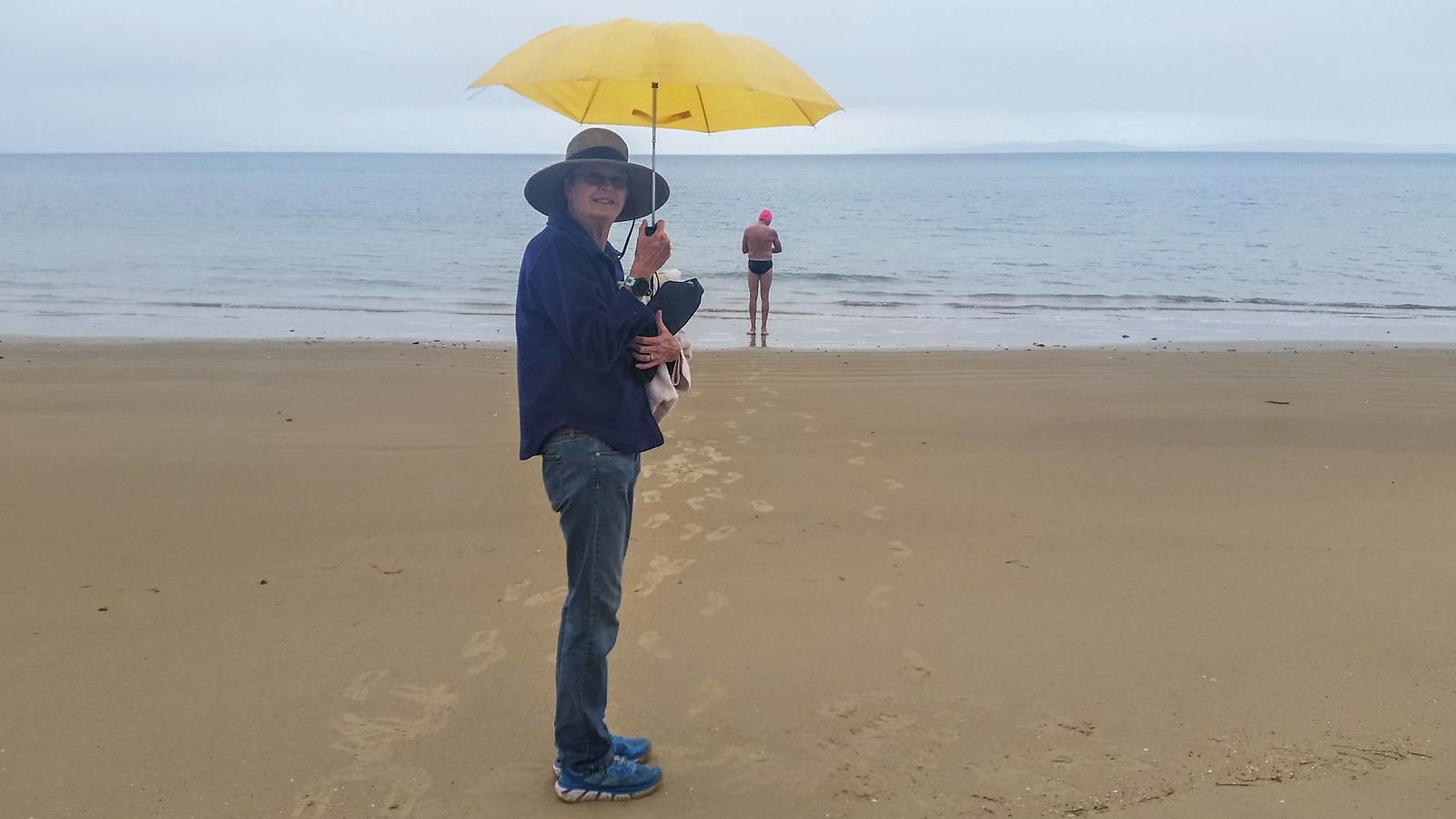 Our plan for this morning WAS to go to the famous Salamanca Market, which everyone was saying we needed to go to, but being as it was totally pouring we decided to maybe take a rain check on the market (I can picture

tassie_gal throwing up her arms in utter consternation at us here ::hides::).

Instead we decided to hit an animal sanctuary on our way back north. We headed north, off the peninsula, and skirted along the east side of the Derwent estuary, with Hobart town across the way (though a fair bit of it had overgrown onto this side as well). About half an hour north of the city we came to the Bonorong Wildlife Sanctuary, here, conveniently, the rain had stopped and the weather was once again rather pleasant. We caught a guided tour by an elderly guide who mom (and dad agreed I believe) swore was the spitting image of my dad's mom, whom I barely knew, so I tried to get a good look. Here I suppose I really ought to describe said guide but I'm not sure how. She was a bit wirey, with white hair that looked like it had once been red, irish features.
The sanctuary had the obligatory hundred or more tame kangaroos one can feed, lounging around living the good life, but we steamed right past these boring dime a dozen animals to see the famous Tasmanian devils. It turns out, you know, they look nothing like the cartoon character at all. They look kind of like large (small dog sized) stocky rats. And apparently are prone to tumors which makes them, um, really a bit ugly most of the time. I couldn't really get a good picture of one, they're very restless and I kept getting pictures of their back or otherwise ruined pictures, this is the best I got. They're mainly scavangers and opportunist eaters of anything they can get their hands on, and I realized they share their belligerent temperament with a lot of other animals that also fill that niche such as hyenas, and jackals; I guess it comes with the territory. Some of the enclosures had a chew toy on a bungee as an "animal enrichment item" to simulate the tug of war over a piece of meat they might regularly get in with their compatriots in the wild.
When my grandmother's lookalike moved on to the koalas we peeled away, admired the cute echidna a bit (sign there said that echidnas are actually very smart with an unusually large brain for their size), fed some kangaroos (look at this cute kangaroo family, and note the tail and leg of the joey hiding in his mother's pouch here), managed not to accidentally feed the kookaburra, and were all a bit mind-bizorgled to learn from the sign that one cockatoo they had was over a hundred years old!! I knew some parrots live a really long time, such as the alleged* parrot of Winston Churchill which is still alive at 119 years old, but now I'm looking around at the huge flock of cockatoos that live around my house and thinking jesus any of these could be a hundred years old!

* while fact checking this claim I was sadly disillusioned to learn that the Churchill estate firmly maintains he owned no such parrot.

From here we headed right across the island to return to the ferry terminal at Devonport. The land through the middle was idyllic rolling farm land. I tried to pull up some Beatles songs on youtube since my memory of childhood roadtrips with my parents were always accompanied by Beatles music (my dad is a big fan). The Beatles estate must be good at keeping the music off the freetube though because all I could find were crummy live recordings.
I think we all thought there'd be some kind of cafe or something available at the ferry terminal, but once we checked in at around six and were let in to the car corral, there was no cafe other than someone selling coffee out of the back of a not-even-van-sized vehicle, and a very utilitarian toilet block, and we couldn't leave the corral area! Since the boat wasn't leaving till (9?) we realized we probably shouldn't have checked in so early, needlessly condemning ourselves to a few hours incarceration in literally a parking lot on a nice Tasmanian afternoon.

This time we had a "family cabin" to ourselves, which was basically the exact same four bunk room but no weirdo strangers. Trip back was quite uneventful. Both my parents got up at 5 to witness the crossing of "the rip" into Prince Phillip Bay but having caught it on the way out I was happy to keep sleeping. Rousted up at 7:15 for an 8ish arrival. Had breakfast in one of Melbourne's cute laneways. Earlier planning had played with the idea of seeing some of Melbourne while we were there but I think we all agreed we were ready to go home, and proceeded back to my place.
But not without stopping at another wildlife sanctuary!! On the northern outskirts of Geelong there is the Serendip Sanctuary! Whereas the other one had been pay entry and swarming with staff, Serendip is nice and quiet -- it's well maintained but I've never seen any staff, and it's free entry. Billie used to live just near it and we went a few times, it's a nice peaceful place to stroll and look at the animals. We saw emu and brolgas as well as wallabies and more kangaroos. They have some nice wetland areas where the viewing area is accessed through an entirely enclosed walkway and viewing is done thorugh slits in the wall, so the birds don't get started, and dozens of different kinds of birds can be seen. My mom in particular is a bit fond of birding so she enjoyed seeing so many different species all in one place. In addition to the open wetlands (birds there are all just naturally visiting of their own volition), there were also several large aviaries with dry land and scrub birds. Altogether a fun place for a peaceful stroll and/or seeing some birds. As always when I visit we only saw a handful of other people.

And the next day, Monday, I had work! And my parents left on Wednesday! The End! Altogether a lovely visit and I think we're all very much looking forward to next time already.