Bugging Out for the Weekend

Just as I pulled into my driveway Friday, my friend Mick pulled up in front of the house. He had had business in nearby Colac. Mick works as a "machine programmer" for a laser etching company. I haven't been to his work but I picture it as some wild sci fi scene with lasers shooting everywhere. I always have very interesting conversations with Mick; soon we were discussing why I can't cut things while holding scissors in my left hand -- I hadn't realized it's actually because of the way the blades are set up, and thought it was just something existential about scissors. He mentioned there's even left handed and right handed tin-snips, and that the left handed ones are always green, to which I objected, that the left should be red and the right should be green, as the running lights on a ship are.
Then we moved on to the symbols I was using on my beehives. If they have the highly contagious and deadly-to-bees disease of foulbrood, I mark them with unmistakable red Xs made with red duct tape. After 75% of the hives I got from this one beekeeper came down with foulbrood I automatically places a quarantine on those hives of that batch which didn't even have foulbrood symptoms, and marked them with a red slash of tape, ie half the X. It's interesting to note that a red cross and a red X look VERY similar, but I try to make sure my Xs don't meet at right angles. Once a hive has been infected with foulbrood, one must put the bees down immediately :( , and then either burn the equipment or you can send it to get irradiated at a commercial sterilization facility. Since there's a general ban on burning things outdoors here throughout the summer, and I had a lot of affected equipment, I've decided to take it down to the sterilization center east of Melbourne. I picked up the first batch of sterilized hives on Thursday, now how to mark them so they don't get confused with nonsterile hives?? I googled around for insternational standardized symbols for sterilized, you'd think there'd be one, but other than a circle with "STERILIZED" in it, there didn't seem to be one. So I got some green duct tape and slapped an = sign on each hive -- I figure that's as opposite of the red X as I can get.

While Mick and I were chatting on my back porch, my dear friend Koriander called me (via facebook) from Washington state, where it was 2am and she couldn't sleep. We put her on speakerphone and for the next three hours she was part of our conversation, it was kind of fun having a long rambling group international conversation. When I sent Koriander the picture of the hives marked with the symbols, the sterile ones on the left and the nonsymptomatic quarantine ones on the right, Kori wrinkled her nose and said "that's alright but... the red ones should be on the left." 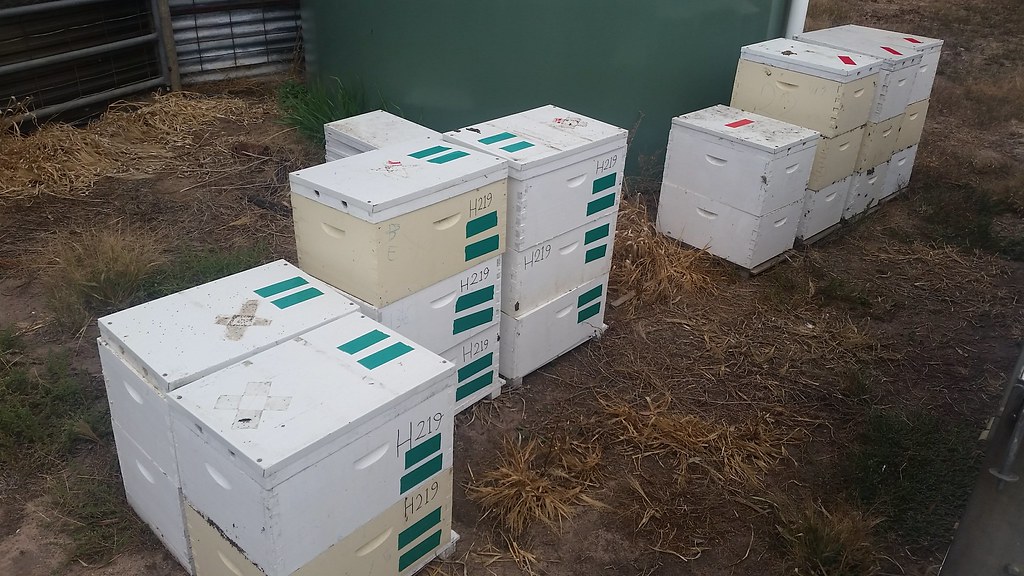 I had been vacillating wildly all week about whether or not I'd go on this camping trip with the Invertebrate Group five hours drive from here. On Friday I got so far as opening an email to apologize to the organizer that I wouldn't be able to make it after all ... and it was at that moment that I decided I would go. To shorten the journey just a bit I crashed at Mick's place that night, since he's about an hour in the right direction. I'll spare you the overwrought travelogging on this occasion since I can only talk about rolling eucalyptus covered hills so many times (theory: writing every day will help you avoid cliches because the cliches will become your own cliches), but the last hour was winding up a very pretty lightly forested valley. And very excitingly, a goanna --a lizard nearly two meters long-- (possibly a lace monitor) darted across the road. I had seen goannas every day when I used to live in subtropical Queensland up north, but hadn't seen any down here in cold Victoria.
Since the itinerary I'd been sent for this trip noted they'd come back to camp at lunch on Saturday, I'd timed my trip accordingly, leaving Geelong just after 7am and arriving at 12:46. The campground was a nice quiet place by a river in the forest. There was no sign of anyone, and no reception of any kind. I pitched my tent in a nice grassy spot under the trees, idled about a bit till 1:16 but still no sign of anyone. Consulting the itinerary, they were going to walk along the river before and after lunch, so I set off up the river.
No sign of anyone but it was pleasant. It was maybe 80f, sunny but with a nice breeze and I was wading along upriver since there weren't really trails on the banks. Returned to camp around 6pm to find the group sitting around a table under the awning of an RV, listening to classical music and eating cheese on crackers and wnie. They had flipped the itinerary and had driven for the day to a nearby location they had been going to visit the following day, due to weather considerations. I had been feeling annoyed, as one might imagine, having driven five hours to join a group that hadn't been where they said they'd be, but they said they had waited in the morning and I realized I was probably entirely at fault myself since I never told them I w as planning on catching up at lunch not morning. The members of the invertebrate group turned out to be a bit on the older side, when I went out with them the next day we had to restrict ourselves to relatively even tracks. I greatly enjoyed talking to them though, and it was nice to be able to say things like "when you say 'European Wasps' you mean Vespula germanica I believe?" without feeling like the colossal blow-hard I'd ordinarily feel like for dropping scientific names into a conversation. Because common names often vary between countries I find in Africa it's often only by resorting to the binomials that we can be sure we're talking about the same plant though.

I haven't had a lot of campfires while camping in Australia because I'm never sure if it's allowed. I would have thought it wasn't but a ranger had happened by and said it was, so that evening I had myself a little campfire by my tent, with a glorious panoply of stars visible in the gaps in the trees overhead. When I put the fire out and turned my flashlight on to my tent, there was ... what I can only imagine was a fox but I swear it was bigger than a fox, its tail was longer and less bushy. It moved like a fox though, darting away a bit, turning to look at me with it's eyes sparkling in the light, then darting further away. Maybe it was the Tasmanian tiger ;) 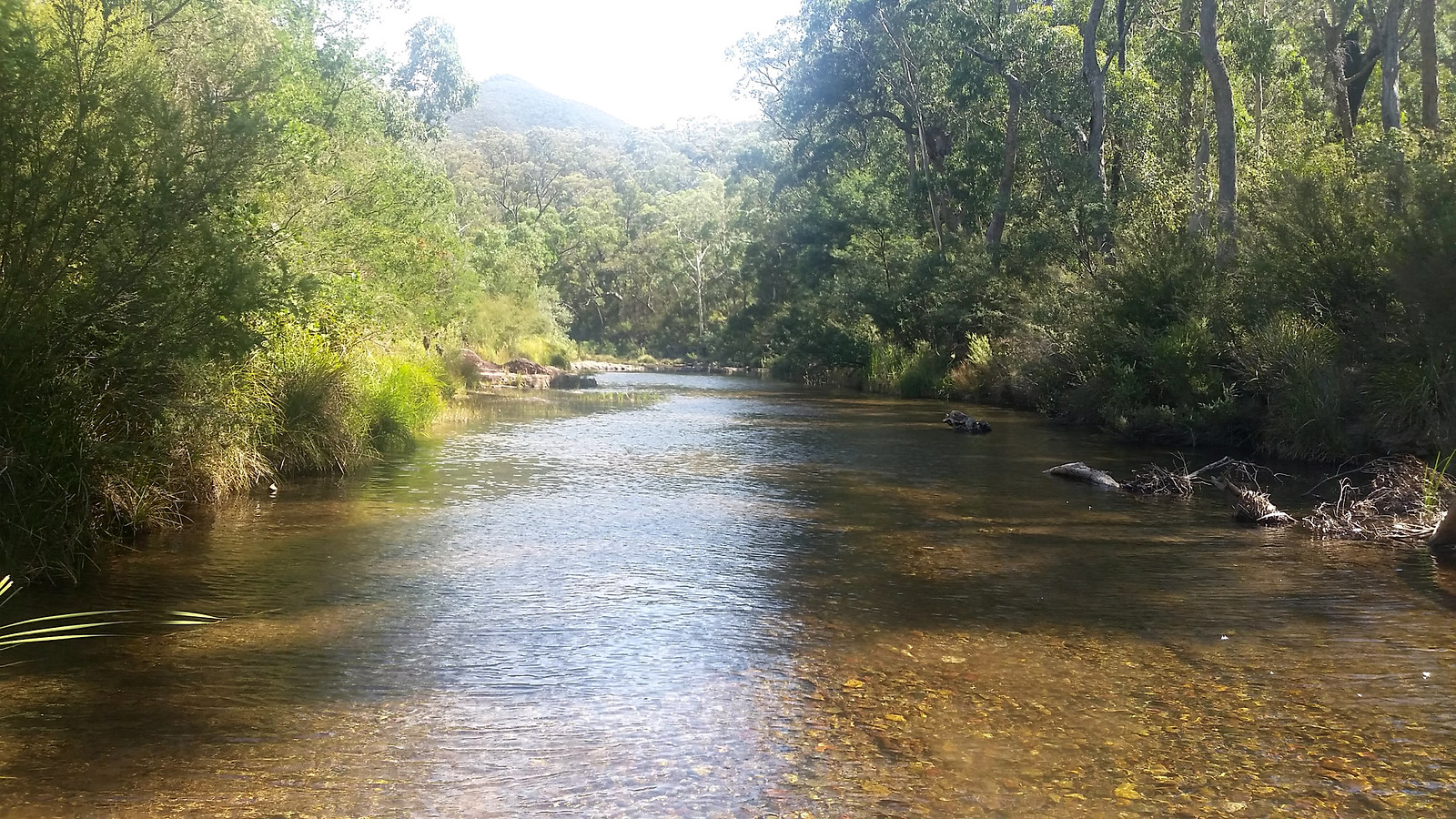 Yesterday, Sunday, March 18th - First I led the group to see the colony on the underside of a nearby bridge wihch I had first taken for bees, but were in fact wasps. I think they were Ropalidia revolutionalis as that's the only I'm seeing on a list of Australian wasps that matches their mostly dark brown appearance. With the group we examined many little beetles and other bugs but I found I definitely am mostly interested in wasps and bees. We found some clusters of "green and gold gnomia bees" roosting on some plants (they look kind of like honeybees, indeed one of the volunteers said she'd sent a picture to an entomologist who, granted, wasn't very interested in bees, and he'd said they were honeybees). Also a spider wasp trying to haul its hapless prey, a spider, back to its burrow.

The weather was overcast, on and off lightly sprinkling, temperature in the mid 70s, it actually felt perfect. During the lunch hour during which we were back at the camp I enjoyed just sitting in my campsite reading, thinking about just how serene this place in the forest was.

Ducked out around 2:30, though the rest of the group will be there through today. Drive back home was uneventful. On both the way in and the way out I was listening to Paul Theroux's semiautobiographical book My Other Life. I love his writing, which includes several book length travelogues, but his travelogues are so much more than travelogues, but philosophical journeys. His writing always inspires me to try my utmost to write as best I can. 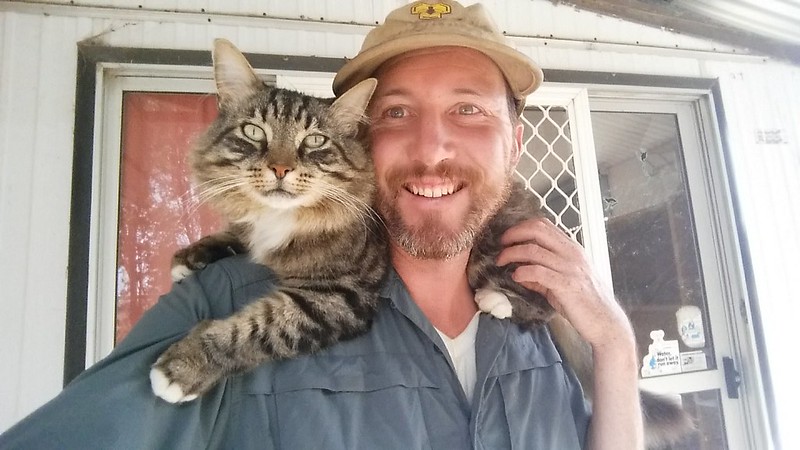 I went straight back to Mick's actually, since we had made plans to play D&D. I've never played D&D before, though I like to make D&D references, and I've been saying I was D&D curious for awhile. I think the rest of my friends were similarly interested and inexperienced at it. We'd been meaning to get together to do it for awhile, and they'd finally done so on some recent occasion when I was out of town. So this was the first time I was able to actually catch up with them. I played a criminal halfling (hobbit?) which I named Dillweed Tosscobble, and was disappointed to find my friends had all given themselves boring names. During the evening I slaughtered two wolves and a goblin. I'm looking forward to playing more so that maybe I'll have some ideas to write a sequel to the D&D entry I wrote awhile ago that I'm quite pleased with (set in our contemporary time, as envisioned by people in the distant future). I also have an idea for a story where the protagonist is a naturalist in the style of the great 19th century expeditionists, and journeys around a D&D style world studying and writing about the specific ecological attributes of the fantastic beasts of the D&D universe. Explore ideas like how does a sphinx fit into it's ecosystem? A cockatrice? What's the natural balance between roving bands of orcs and elves?


Next Adventure: I've signed up for night shift Tuesday night volunteering on the continuing wildfires about an hour West of here. I think I'll start work early tomorrow, sleep till the shift starts, and then just survive as much of Wednesday at work as I can.