Photo credit photographer from the Geelong Advertiser. From this fire

Yesterday, 1800 hours - It was a beautiful evening as we drove along the highway towards Colac in silence. The sky was grey but the fields and hills seemed to glow with the gold color of dried grass, the black cattle standing out upon it. The sun shone through the clouds in several shimmering rays ahead of us to the west. I was riding in our station's mobile command vehicle, a hilux wagon, with Dave, a member of our brigade I didn't know very well. He was a bit stout and badger-like. Grey haired, he later mentioned being 58.

Several side-by-side brushfires out west had already burned 6,000 hectares since Saturday, destoryed 18 homes, 42 sheds, and an unknown number of livestock. Arriving at the station in Colac town, we joined a handful of other volunteer firefighters from the surrounding area and boarded a small bus that had been chartered to take us to the staging area. That took about another hour, traveling west into the twilight. I noted that this area has beautiful walls of uncut volcanic rock that run for miles and miles surrounding paddocks. The houses we passed were often cute little victorian cottages, squat, weatherboard, with several brick chimneys rising out of their peaked roofs; or else sad dilapidated former victorian cottages; or else ugly brick modern houses of a low lying 70s lookng style. These three types of houses dotted the countryside at large intervals, and finally we pulled into Camperdown town, which was a concentration of all three around a very broad main street with a tree lined central median.

The staging area was the town fairgrounds. As we pulled in, several staff of State Emergency Services (SES) in flourescent uniforms the color of orange sherbet checked us in at the gate. A line of DELWP's light firefighting vehicles were parked to our right, the red CFA firetrucks were lined up ahead in the oval, and buses and other vehicles were to the left. We parked and followed the crowds to the central building. Before I knew it a plate had been thrust in my hand and I was standing in a hot food line. And here I had stuffed my face with ramen before leaving home thinking i wouldn't get dinner! In line and at the cafeteria were about 20 of "the boys in green" from DELWP (pronounced "dwelp" in my head) and about an equal number of us from CFA in our mustard yellow. The Dwelp uniforms look almost identical to ours except for being asparagus green. They looked mostly in their twenties though, while the average CFA age is probably 58. Dwelp is about 90% male, I think I saw two female firefighters, while among the CFA I haven't seen a female in other than a staff role. Dwelp stands for "Department of Environment Land, Water, and Planning," though I recently heard they've entirely been moved over to a distinct department of Forest Fire Management? They had Parks Victoria on their uniforms anyway. DELWP is typical of what I've seen of Australian government though for favoring incomprehensible five letter acronyms and then changing them yearly.

Food was very good, roast beef and gravy and some mashed squash and broccoli. Our "Strike Team" met up after eating. We would be a small strike team of just two tankers and a command vehicle. Dave and I were teamed up with two guys from the Wye River brigade and assigned to the tanker from Barongarook. The Wye River guys consisted of a short fellow named (Bartley?) whose name I very clearly had in my head until the exact moment I learned the other guy and I was never able to catch it again, but the other guy was tall and lean, bald, with a hulk-hogan mustache, named Wellesley. The short guy had kind of shaggy hair and a big loop earring in his left ear, making him look a bit like an aging rockstar. Bartley and Wellesley obviously knew eachother well already and from the get-go and throughout the night they were joshing eachother good naturedly. Dave had a lieutenant stripe on his helmet but that was from before he transferred to Birregurra and apparently not his current rank, so Bartley was in charge and Dave seemed perfectly content with that. All in all I found my team to be great, keeping up a positive attitude and good rapport all night -- I've seen many old CFAs guys quick to squabble and get grumpy with eachother.

As we approached our assigned truck Dave pointed at hte bubbling in the reflective checkers around it, saying "guess she got a bit hot!" and just then I opened the door and the warm acrid smell of wildfire wafted out. As we prepared to drive out I noticed the guys working on the truck in front of us also had the same uniforms as us, which also said CFA, but their uniforms were sky blue. After noting how busy they were on the truck with various auto mechanic tools I think they must be CFA mechanics?

2020 hours -As our strike team left the fairgrounds oval, not to be overly dramatic, but it rather reminded me of the scene in Black Hawk Down where the UN armored units leave their stadium staging area, as our big trucks rumbled out of the entrance to the oval and out of the staging area into the darking twilight. We proceeded south to the small town of Cobden and arrived at the fire station there, which appeared to be the command center for this specifc sector of the firegrounds. We found ourselves sitting around a briefing room here. Someone made a joke about all this "hurry up and wait." Finally our strike team commander, grey haired and looking unshaved, face covered in black smears of ash, came and briefed us. The fire is actually fully contained now but we would be putting down any flare ups. Our first mission was a distressed residency with fire near it. Soon we were back in the truck headed for our location. I sat behind the driver, Wellesley drove all night, Bartley sat in the passenger side navigating and handling radio communications.

2112 hours - only ten minutes or so out of the station, driving through complete darkness now, we started to see spot fires to our left and right. We drove past the house in question, out in a rural area, and into the field behind it. Climbing out of the truck, into the moon-dust like ash of the burned-over field, fires were visible glowing in the dark in all directions, which was a bit disconcerting. It seems the fire had swept completely around this house but it had been saved. We set to hosing down some nearby flaming stumps. The darkness of night made it easy to spot any flames or glowing embers. When you get the hose right on a really hot spot it makes a very satisfying hissing or even roaring noise. While one person hosed two people would set about with rake-hoes exposing and breaking up the hot area. We spent quite some time hunting and destroying hot spots. When we finished that field we drove down neighboring roads, which were lined with cypress trees, which had mostly survived but many hidden smouldering places underneath them threatened to reignite if unchecked. I found myself walking along beside the dark bulk of the firetruck, slowly rumbling foreword, the line of trees ahead surreally lit with alternating red and blue from the lights. I was holding a smaller hose with the "high pressure nozzel" on it, which was kind of gun shaped, with a sort of pistol-grip and forward grip. Every twenty to fifty meters Bartley, who was walking ahead would call back saying "here's one!" and indicate into the trees. When I got there the first sign of fire was often the smell. Then I'd see a glowing ember, point the gun, brace my legs, and pull the trigger, sending in a high pressure jet of water, playing around the area of the ember until I got a satisfying "SSSSSSSSSSSSSSS!!" hiss back. After a thorough dousing I'd let go of the trigger and Dave would attack it with the rake hoe, while I stood ready to hit it again or looked for nearby smouldering areas which may have been missed. About once an hour or so we had to return to return to the station in Cobden to refill our water. After protecting the house the next mission we were assigned was the put out fires on a large shed which had already been destroyed but was still smouldering.

0315 - The moment of equinox came as I stood in the dark night shooting water into a burning stump, which was roaring at me. And thus the Australian summer officially ended and Autumn began. The fire continued roaring at me, though when I finally got home I did find a very autumnal covering of leaves on my lawn.

0330 - Fell asleep for the first time, and only half an hour after I'd had a red bull! While sitting in the back of a fire truck! Proof that I can sleep anywhere! It was just a quick nod-off while we drove between hotspots.

0520 - "Hey, you're ALL asleep!" objected the driver, Wellesley, in mock outrage, as we were driving. "Bartley here was snoring in fact!" By now we were spending more time driving without seeing anything to get out and hose down.

0600 - Returned to Cobden station. What seemed an entire platoon of Dwelpers also came in. We'd been seing them out there too but I didn't realize we had so many in our sector. I think our strike team was the only CFA force here. There appears to be no rivalry between CFA and Dwelp, nor did there appear to be, well, any interaction other than official coordination, at all.

0630 - returned to the central staging area in Camperdown. Was soon in line for breakfast (sausages, hash browns, beans, bacon (well, Australian bacon, which is like thinly sliced ham) .. weird scrambled eggs that I took a nibble of and left alone). Sat down to eat by and greeted a Birregurra brigade member I knew who was there to begin the day shift. As the sky began to turn from black to a dark blue we boarded our bus back to Colac. The morning gradually became greyly lit. In Colac transferred to the command vehicle, which I was surprised to find parked in a different place, but I guess the members of the shift we had relieved had driven it back to Birre, and the shift relieving us had driven it back to Colac.

Got home exhausted just after 8am, 14 hours after I left. I had planned to go to work today but it just wasn't in the cards. Despite that I suspected I was totally grimy with ash, I went straight to sleep. 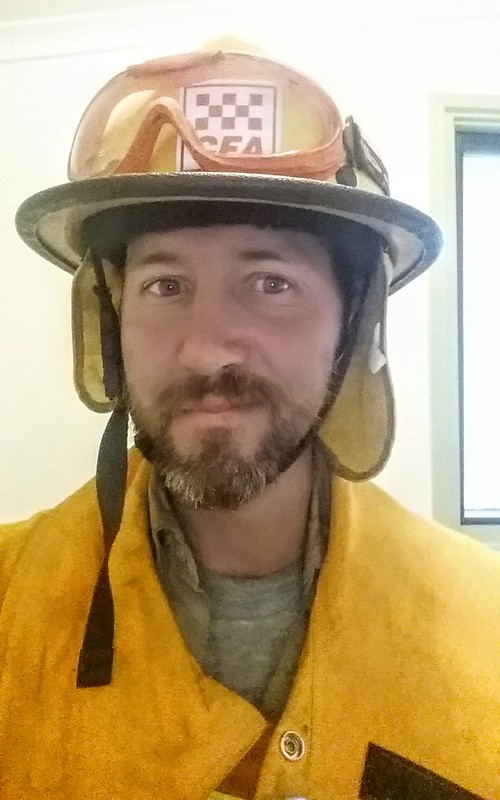