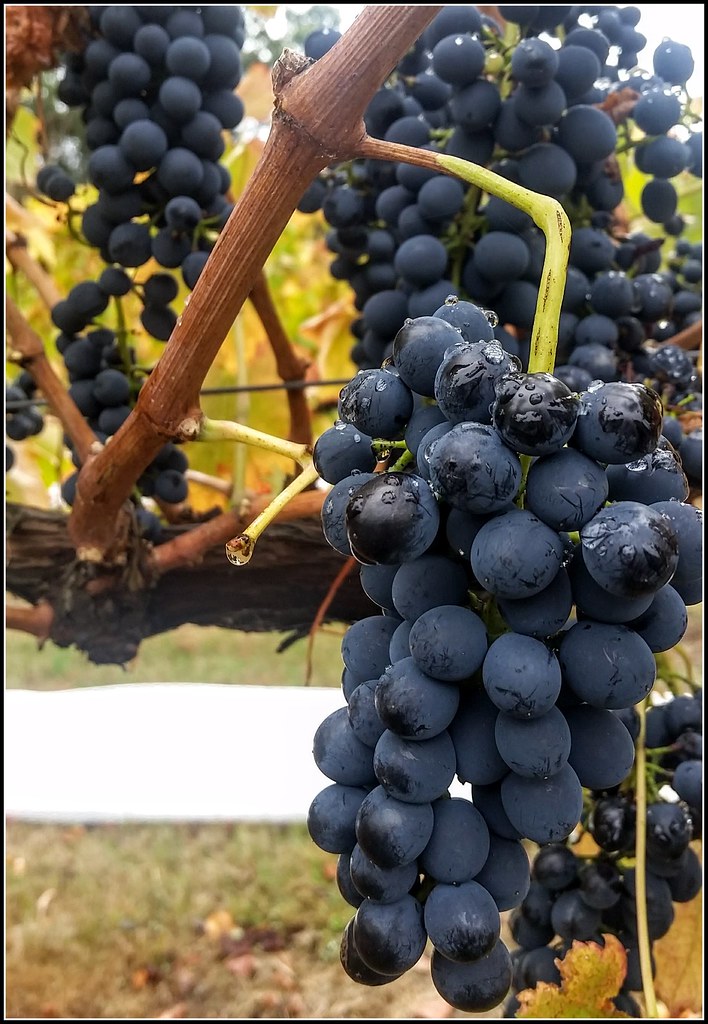 Last Tuesday -I arrived at my friend Udi's vineyard in the grey light of morning, with dew still glimmering on the grapes. I was immediately greeted by my friend Jason, on whose land I have some beehives, with his typical Australian humor: "Did you steal a car or something?" -- since he usually only sees me in my work truck, not ole Kermit (who once again seems to have gone through five liters of oil in two weeks) -- Australian humor can sometimes sound like they're having a go at you.
I soon saw many other people from the local community I've seen around at other local events, including Alfred, "the local beekeeper" -- it was nice to have someone ELSE in the group referred to as "the bee man" for a change. Alfred is 81 and very friendly. He's been in Australia since 1964 but still talks with a distinctive German accent, heavy-handedly turning all "th" sounds into "d"s. We were all given a small pair of pruning shears, brief instructions ("cut off everything that looks like grapes!"), and set loose on the vines. As we all later agreed, after more than four hours it wouldn't be very fun any more at all, but it was a pleasant way to spend the morning. Because one was often working opposite someone else on the vine row one would have a little conversation for a few minutes before one of you had to go empty one's bucket into the big container on the truck, so one had many little snippets of conversation. Would be a great setting to start a flirtation in a romance novel ;)

Tuesday, as it happens was the first day after a four day weekend, because, Easter Monday is naturally a thing ("What did Jesus do on MONDAY??" I asked a friend -- "gave us a public holiday, now quit complaining!" was the response). I was initially wondering why Udi didn't have it on Monday when we'd all be off (I worked a half day on Friday and Monday to justify myself), but I think the winery which is actually processing the grapes didn't want to receive them on the holiday.
Udi just has about an acre of vines, which he explained he put around his house because he didn't want the cattle right up to the house but didn't just want a giant lawn he had to mow. So, grapes! He sells just enough to cover the costs and uses the rest to entertain or give away to friends and family. 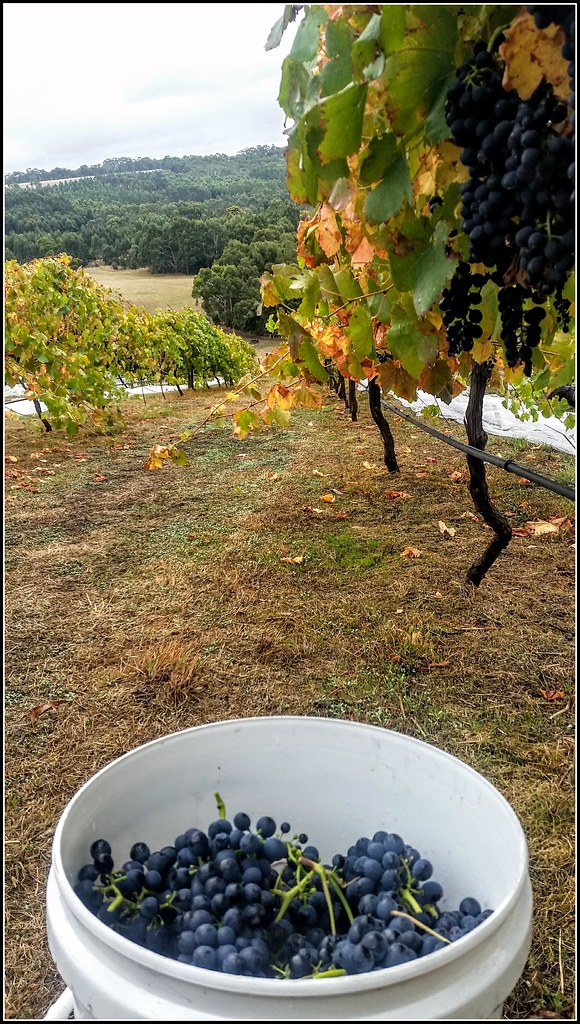 We finished right around noon, the dozen and a half or so of us having made short work of it. Jason's two teenage sons then got to squabbling about which of them would drive their atv back to their place just across the narrow valley, so Jason made them both walk. Really it seemed very civilized for brothers -- they didn't look even close to punching eachother. Anyway, the rest of us then sat down to a feast, at a table on the lawn just above the vineyard! Among some salads and things, Udi had made a slow roasted beef short rib in guinness, which he had apparently grilled just a bit before beginning the slow roasting to give it some crispyness. Needless to say it was delicious!!

More interested tidbits about Alfred that came out at the table -- back in Germany during the war, his father was taken to a Auschwitz for refusing to fight in the army. And his wife Doris' eyes became momentarily sad and resentful when she said the US airforce completely leveled her hometown. But then the conversation flowed on and by and large we had a lovely "neighborhood" gathering. I feel so lucky to have been absorbed into this lovely circle. 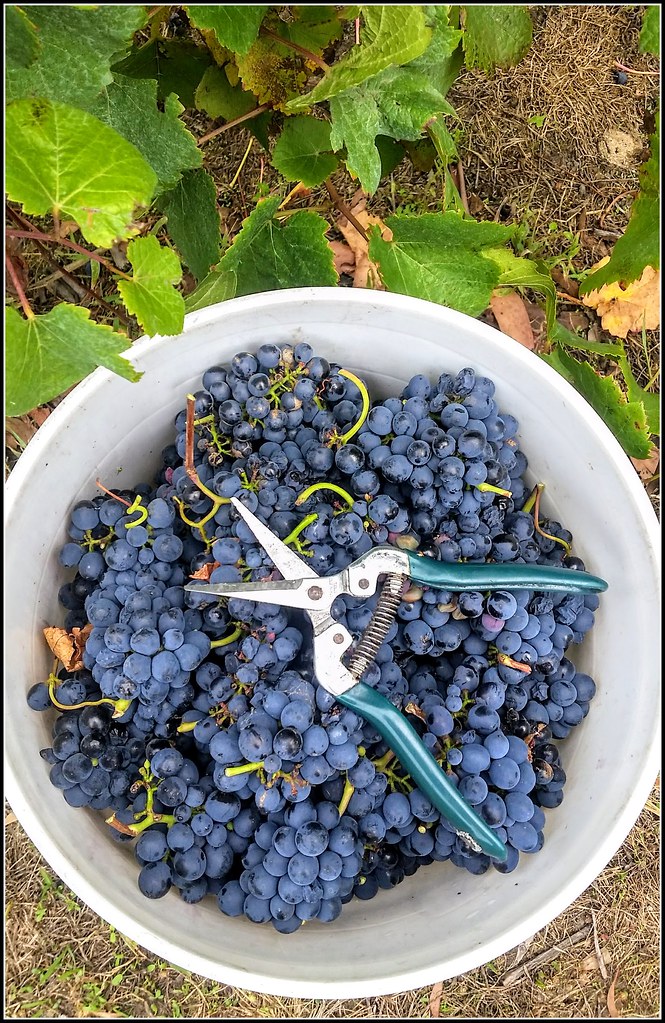 This weekened (today being Friday) I'm helping Udi at a farmer's market tomorrow (Saturday), partly because I'm about to jump into farmer's markets myself to sling honey so it'll be nice to dip my toe in by helping someone else at their booth (Udi sells meat -- he actually does the whole process from raising his cattle to selling the meat, cutting out several stages of middle-men most people have), but also I just enjoy hanging out with Udi. And Sunday there's another conservation project, this time at a beach that's not terribly far from here.

Sour Grapes
And in other news they announced the winners for that writing contest I entered to win a trip to Argentina and... I didn't win. It was of course always a longshot what with 7,000 entries, but I'd read a whole bunch of them and many were terrible, so I dared to hope. Now I'm feeling sorry for myself for never having ever won a writing contest -- if I can't win at "travel writing," ... ):
And it's probably quite entirely sour grapes, but the third winner may have hit on a poignant story background but I rather feel they exhibit not an ounce of inspired execution of their writing or promising ability to describe their travels, they seem to have won purely by happening to hit their head on a background situation that the judge liked.... but I'm not bitter ;) (and in a kind of weird coincidence I also have an ex who was imprisoned for six months in the Republic of Georgia for having visited that same place (Sokhumi) -- guess I should have written about it...

Posts from This Journal “udi” Tag

Posts from This Journal “udi” Tag