A Mundane Week in Autumn 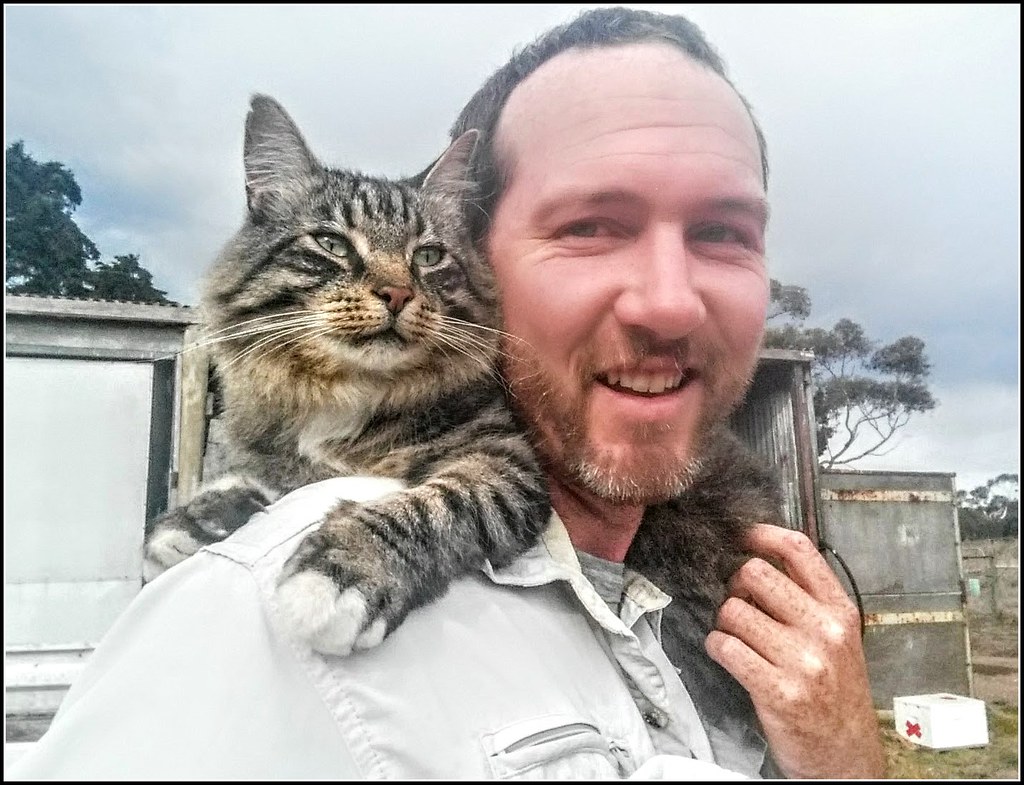 I've got a million pictures of Cato on my shoulders but I think this one came out particularly good.

Just a mundane week here. It's a depressing time of year, as Autumn sets in, but we don't even have the autumn holidays one looks forward to in the states - April being the southern hemisphere October, we'd be thinking about Halloween at this time if this was the states, but nope nothing. Though I am thinking about making eggnog, since I read somewhere it should be aged a few months and want it ready for the heart of winter in June/July. Because terms for the different cream-levels of milk are different here I had to talk consult with cooking magician Koriander for recipe adjustments.
Normally this time of year I have projects abroad to look forward to, but this year all the organizations I usually work with are saying they don't have budget for any new projects -- I vaguely suspect I can blame Trump for this (the money all cmmes from USAID). Other than a possible project in Haiti, anywhere I go will have to be on my own dime and time, yuck. There's a traditional wedding in Kenya I am invited to and would really like to attend but it's expensive getting oneself to Africa... and it's the exact same day my uncle is getting married in the States so I might be in trouble if I go off to a wedding in Africa instead ::hides:: 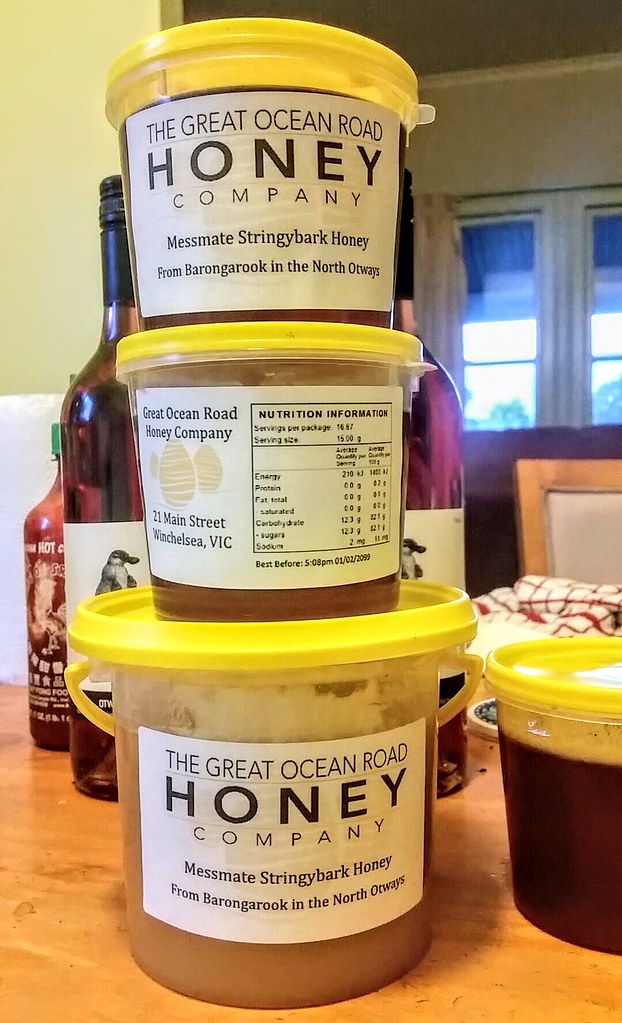 For four days this week the weather was actually extremely nice, highs in the upper seventies, sunny. Even in the evening it was comfortable! I don't think we've had four days in a row of nice weather all year. Went to trivia in Geelong town on Tuesday for the first time in possibly months just to see everyone. Wednesday I finished the labels for my honey -- In the picture above you see the front and back of the label as seen on the smaller 500g pale/bucket/jar/thing, as well as my really messy table (the two wine bottles immediately behind it are Udi's wine actually). The honey is a different color in the bottom 1kg bucket because thats the one that's been sitting on my kitchen table for months and has crystalized. Its currently the same size label on both buckets, but it kind of covers the whole side on the smaller buckets and I may get smaller labels for the smaller buckets in the future. Any thoughts on anything even as subtle as font choice are appreciated. I set the expiration date as "5:08pm 01/02/2099" as sort of a joke -- the health official I talked to had said honey doesn't need one but it's worth putting on since people expect one on food products, and I can set it at absolutely anything I want.

Logo and the nearby landmark it's supposed to be reminiscent of -- this is the "cover image" our designer made for our as-yet-uncreated facebook page.

Also I might increase the opacity of the three hive logo that is currently under the name on the front label, since it's currently so faint it kind of just looks like a stain.

Thursday I brought a load of honey to the cafe my friend Joe and his wife run and sold it to them. It was interesting negotiating a price with my good friends since instead of trying to hardball eachother we were like "so.. what should the price be?" "::shrug::, what do other people sell you honey for?" "ummmm let me check" ... I think in the end I matched the prices of the higher priced other local supplier -- $14/kg from the store to me, to be put on the shelf at $22 (for the 1kg units, for the 500g $15 on the shelf and same $14/kg wholesale) I think the Apiary has 390g jars on the shelf for $14, I've always thought their prices were ridiculously high. But hey if people will pay it... and since it has an infinite shelflife I'm happy to set it at a high price that may sell eventually over a lower price that may fly off the shelf.

Felt like I was comning down with a bit of a cold so used 5 hours of sickday to take the rest of the day off. Was just sickish enough to be mildly uncomfortable all day.

Friday I had to drive down to Melbourne to get one last load of hives from the sterilizer. Man it's a whole long day of driving to go down there and back. It was a good my-health-may-not-be-100%-yet activity though ... but then my health was bound to take a thorough shellacking because my friend Trent is going abroad next week for potentially years so we were bound for a night of heavy drinking at his favorite place Friday night. Rheingold's is one of those Kitschy permanent-Oktoberfest style German restaurants, located in the basement of an old bank so it feels a bit like a dungeon. One pays one amount for all-you-can eat dinner (they roast a whole pig, as well as provide sauerkraut and other such appropriate things. I found I was strangely loving the sauerkraut), and one can pay for drinks as one goes or like $60 for all you can drink tap beer -- which I did the math and I'd have to drink three liters to make that worthwhile which is NOT about to happen -- but many people go for it and try to get their money's worth and hence end up ridiculously drunk. Really funny animated-gif picture of Trent being goofy as the roast pig is paraded by behind him. A large group of students (of medicial imaging apparently) from a local univsersity happened to be there too, all dressed up in lederhosen and such. It was a really fun evening. As we were leaving a cold wind was beginning to gust but it still felt nicer than most evenings all summer.

In the morning I woke up on my friend Greg's couch to sideways rain pelting down outside. Driving home through it was wild, as the car got buffeted and in places it looked like the water was just flowing across the country roads in a roiling mist -- I passed at least one car that I think had decided to stop and wait it out. All weekend it's continued to rain and generally be cold and yucky. Fortunately I didn't need to leave the house. I'm actually glad when we get this shit weather on the weekend because unlike the rest of you, my work is not a fun place to be in poor weather -- I'm either outside or in a non-temperature-controlled shed. 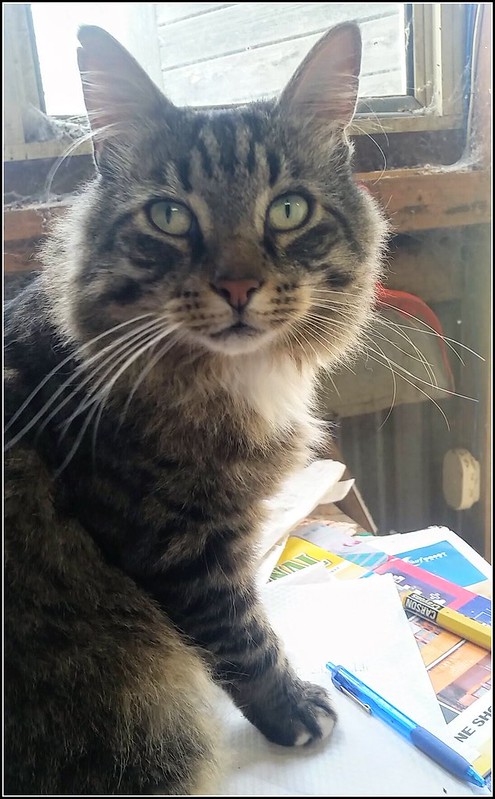 And here's Cato looking more sweet and innocent than he ever has before! Normally he likes to strike such stern poses.

Random pandora discovery song of the week: Save This Penny - Medicine --I really like this style of music, I guess one would call it "folk" but I think if I told people I liked folk music they'd picture something hokey going on with banjos, so I find it hard to describe.