Went out boating with my friend Udi on Wednesday. In his little motorboat that is surprisingly stable for its small size we launched from Queenscliff, the end of the peninsula on this side of the bay, and circumnavigated the sand bars and mud flats the block most of the entrance (there's a shipping channel on the east and west and actual mud islands in the middle. Big ships actually have to enter the bay and skirt the east side for a bit). I was pleasantly surprised by the number of "landmarks" (seamarks?) to visit and navigate around out there. Udi thinks he saw penguins in the water which is entirely plausible but I can't confirm because I only fleeting glipsed the suspect bird. We also saw albatrosses which was cool. Once we reached the east side we skirted the beaches there. Lots of cute colorful beach sheds along the shore. And then as I was trying to identify a pier for navigation I found myself spluttering "the the the a a the THATS A WHALE!" as one dark back and then another silently rose in front of the pier and went back under. The whales, which I believe to be humpbacks, were in only 30 feet of water slowly going up the coast. We paced them a distance off for a bit. The entered the anchorage pictured below and deviated from their previously straight path to make some circles around the anchored vessels. I've seen plenty of whales at a distance in Southern California but I'm not sure I've been as close as we were to these ones. I was unsuccessful at getting any photos of them spouting. 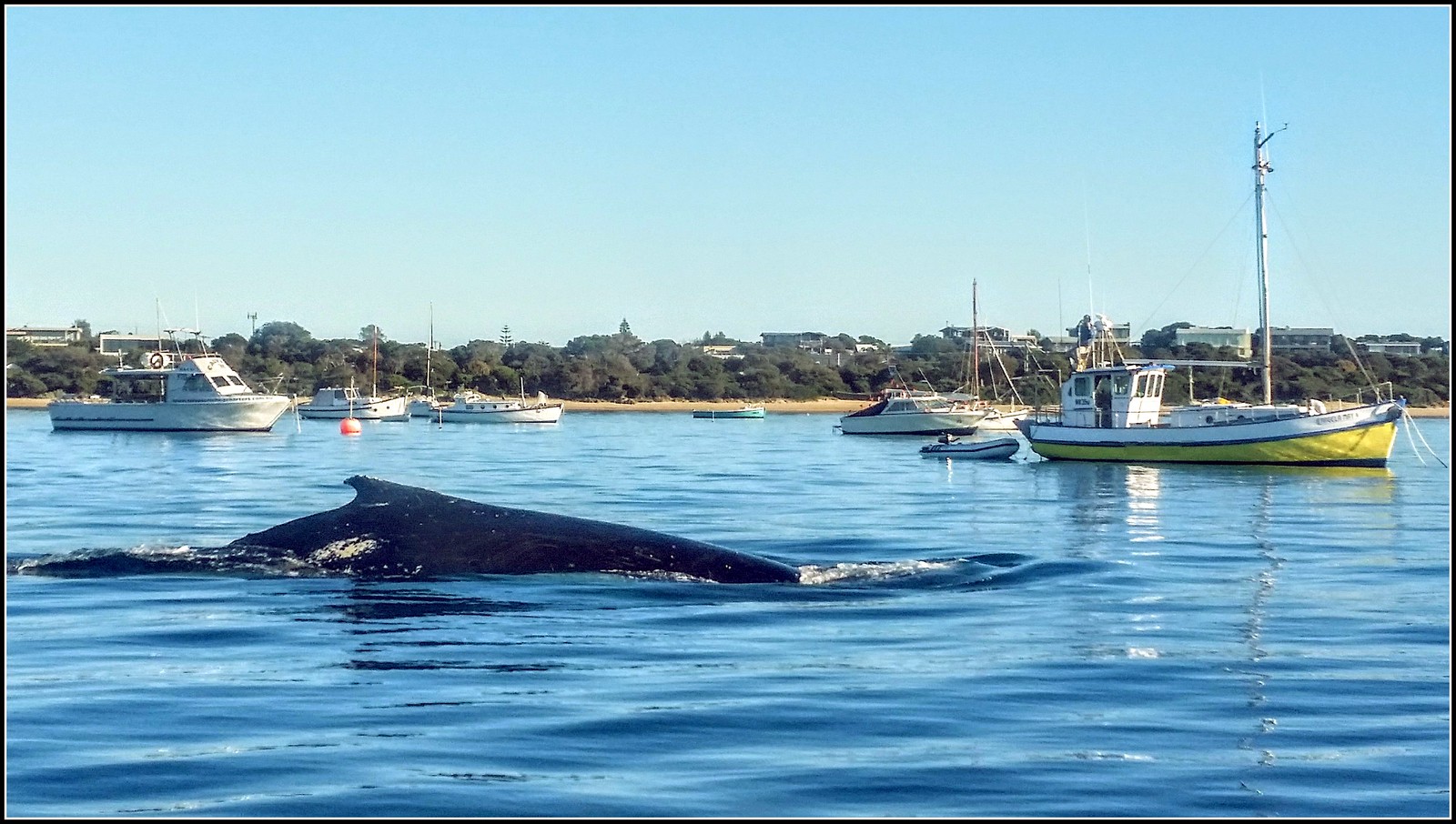 Thursday I headed up to a town called Daylesford because I've determined the "box ironbark forest" in that area is the best honey producing area around. So I put flyers up in Daylesford and other general stores in the forest area. While doing so I began to worry that maybe this was a colossal waste of time and no one would call me ... but not an hour after I'd put the flower up a nice woman called me after seeing the flyer on the Daylesford grocery store bulletin board and from what she says and how the property looks on google maps I think I already have a great location!

My other goal was to get a Christmas tree. June is six months from December and therefore the southern hemisphere equivalent, and last year I got some pine boughs from a local pine plantation and put them all in a big vase, and I was going to do that again this year but all the low hanging branches in that plantation this year are brown. Well I found that making it a bit christmassly last year really made the heart of winter much more cheery so I was determined this year. So then I googled christmas trees and found there was a christmas tree plantation by Daylesford. I emailed them with "I know this is an eccentric time to be after a christmas tree but..." and they wrote back that they did indeed have christmas trees to sell right now! The guy asked what time appx I'd be there and I said "11-12?" thinking I'd stop there first before flyering around. But of course I stopped at every general store or likely looking bulletin board on the way and didnt' get there till after 1 and he was no longer there. ): But when I return next week to check out places that call me I'll try again to catch the christmas tree guy.

The last and furthest north place I got to, which wasn't actually that far north as far as the target forest region is concerned, was this cute little townlet called Glenlyon. According to an informational sign there was a nearby waterfall one could walk through the forest too but the weather was actually really miserable so I only got out of the truck long enough to put a flyer on the bulletin board. From there I proceeded along small country roads through thick forest to Trentham, a town that looks so cute I was seriously thinking "maybe I should move here?!" which is saying a lot because I love my current little adorable town a great deal. From there I headed south on the fastest route home which was still mostly back country roads. Across a bridge over the "Ermahgerd River" which sign I really wanted to photo but there were no pull outs. Breezed through another little cute town, Meredith, at which I didn't stop this time but have before (fairly decent burgers at the pub). I had chosen this route as simply the best way to get home after flying Glenlyon and Trentham but it occured to me it was a particurly scenic route up to the Victorian Gold Country through several cute towns. If anyone wanted to engage in cute-town-tourism this would be a very good route. I was already thinking next time my parents visit of taking them up that way so we might have to retrace the route. Daylesford itself is pretty cute but with a population in excess of 2,500 it's far too big city for me ;)