Christmas in Winter! Another Day on Driveabout and Some Tacky Adventures

well my day began with comedic misfortune. The plan for the day was to go on driveabout to check out places where people had called me in response to last week's flyers and to put up more flyers. I was running late when I left the house for to get up there two hours from here to meet with someone, and the last thing I grabbed was the little plastic box of thumb tacks that was conveniently on the corner of the table. Well I guess it was for some reason upside-down and as soon as it was over the floor the lid fell off dropping thumb tacks allllllll over my floor. I stared at this in horror for a moment before calculating that it would take several minutes to pick them up and I didnt' really have several minutes, so I'd just buy more somewhere on the way. I just had to remember when I came home not to take my shoes off and then walk in and step on thumb tacks! We've talked about my memory before right? Yes I believe we have. I told several friends to remind me but of course they wouldn't know when I was walking in. Anyway, there was nothing for it I was in a mad dash out the door, knowing full well this would probably lead to painful misfortune later! 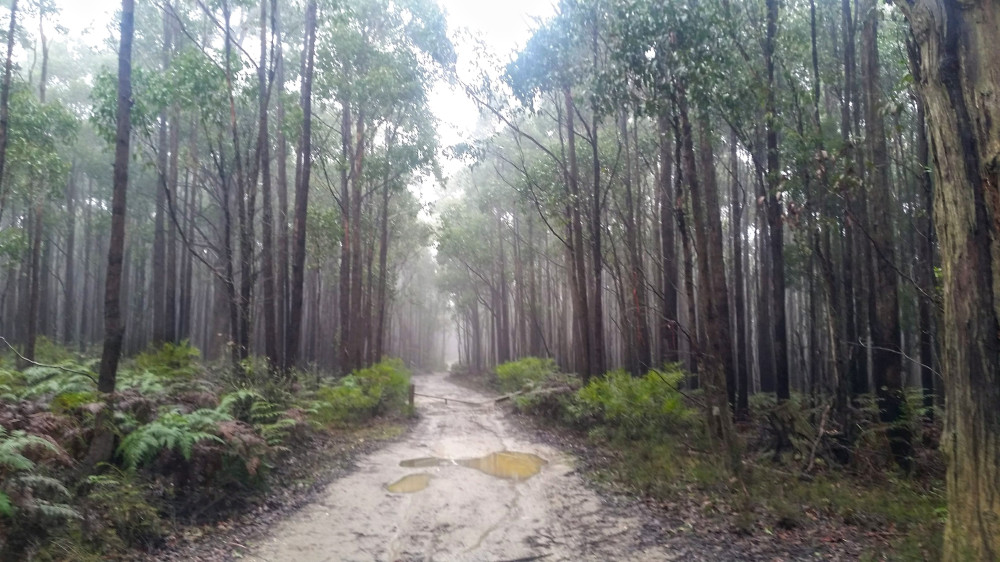 Though a bit cold out, the sky was blue when I left my house and it seemed like a relatively nice day. I don't know if it's because I got into higher altitude later or across the board the fog came in but by the time I got into the forested area to the north there was heavy mist all about. It was actually quite pretty (see above picture). Also I finally got a picture of the sign for this funny-named Lerderderg River (If you're not familiar, #ermagerd is totally a common hashtag for accidentally really embarassing facial expressions)

First guy I met with was in the country outside of the small town of Trentham. While I chatted with him briefly in his kitchen (because I was running late he didn't have much time before he had to go somewhere else), the fog was dramatically billowing past the windows very visibly. He made a joke about being in the cloud forest. He was very nice but it didn't look like the actual forest was within 2km of his house (you'll read bees will forage up to five kilometers away -- they WILL but they prefer not to and it makes their honey collection less efficient), though it was hard to tell since visibility was about a hundred feet due to the fog. From there I drove in the direction he indicated the forest was in to see how far it was. It was during this time that I took the above picture of a narrow track in the forest (Wombat State Forest).

Found some residencies which were somehow in the middle of the forest and allllmost got up the courage to actually knock on their doors but reasoned I had to hoof it to make next appointment and it didn't loooook like they had any flat spaces with vehicle access which I could put hives on. If they had mailboxes I'd have put something in but they didn't (probably postal service won't deliver to the middle of the forest and they collect at the post office in town). 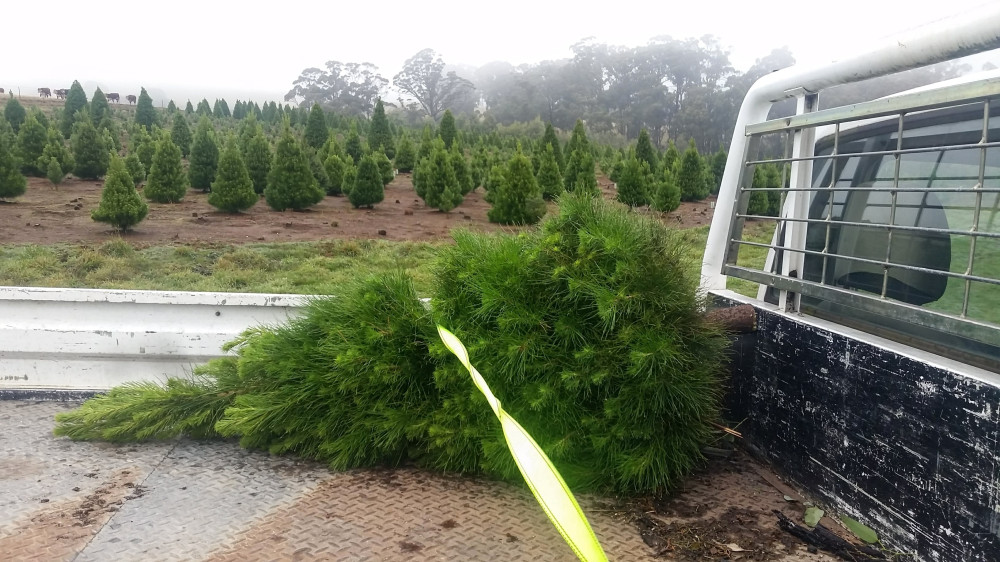 Next stop was the christmas tree farm!! The guy who runs it and his brother were there, they came out of the shed where they'd been huddled against the cold when I came up. They were both very friendly. I've never actually selected a christmas tree from the lot where it's growing before! There was one I really quite liked its needle floof game but it was a bit short, another I quite liked but at about five feet I'd select it if I was really really going all out Christmas but since I don't really quite quite feel like going full bore christmas-in-june I toned it down to this 4 foot tree (they apparently measure and sell christmas trees by the imperial measure here still!). He offered to sell me an "American style" christmas tree stand for $45 but that seemed a bit steep. I thought I'd ask my friends if they had one I could borrow but as it turns out not ONE of my filthy lacking-in-true-christmas-spirit Australian friends has ever had a real christmas tree! Fake ones all around! (Also had noticed a suspicious lack of christmas tree lots around christmas. Even though its middle of summer there's no reason they shouldn't be able to have real trees but it just doesn't seem to be as much of a thing here). Also I quite appreciated that the weather was so, well, christmassy today for christmas tree getting!

Christmas trees available were Monteray Pine (Pinus radiata, more commonly called Radiata Pine here). and then they also had Douglas Firs in pots, though I didn't even really look at them. He had kind of waved at them dismissively and I was content with the Radiata. Though and I had previously googled what pine tree smells best but I've forgotten the results, if douglas are known to smell more delightful I may be made to feel regretful. (though selected tree now in my laundry-room pending all the rain on it drying off, already is making it smell wondrous in there!)

Now, as it happens. The christmas tree lot is just right on the edge of the forest. And has empty swaths along the edges just wide enough to drive a truck along ... and plonk down some beehives. So of course I was like "heeeeeyy how do you feel about..." and the friendly guys were kinda like "::shrug:: sure? why not!" ... so I think I may have gotten an in on a perfect bee site through my christmas tre mission!! (picture below is just outside the christmas tree lot) 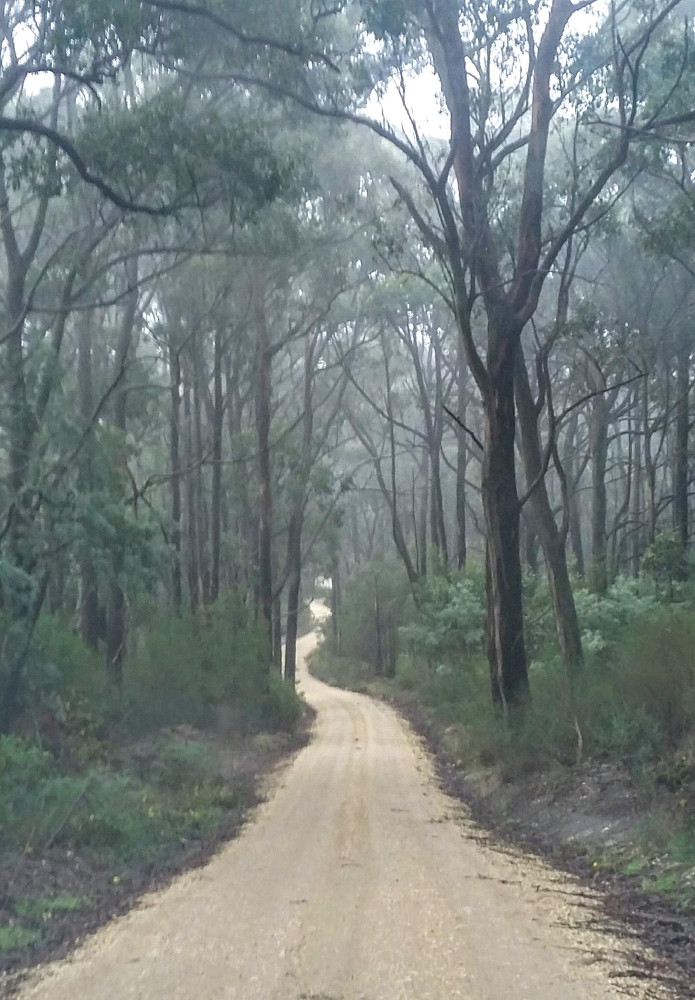 By now it was getting on lunch time so I proceeded to the nearby town of Daylesford. While in Daylesford I determined that only 1 of 3 flyers I'd put up last week now remains (later confirmed another in another location was still up so 2/4 were confirmed to still be up after a week, kind of disappointing odds), I don't know if it was due to winds ripping them off, store policy (the one on the bulletin board inside the grocery store disappeared. I had hoped to ask a staffmember before I put it up but they all seemed extremely busy so I just went with it. I got more calls from that one than any other though, since it was in plain view of people bored while waiting for a teller and everyone has to go to the grocery store), or spiteful other beekeepers (sadly beekeeping actually kind of selects for antisocial people, there's a lot of absolutely lovely beekeepers don't get me wrong, but there's some real crochety antisocial cases too, and this area is a beekeeping hotspot).

For lunch I went to the same American style diner I had gone to last week. Last week I had gotten the gravy burger and verily it was delicious. As well the fries were remarkably good! This time I had the "fresno burger" which was a regular burger with "spicy" relish (Australian spicy, so I couldn't actually taste any heat whatsoever) (Is Fresno known for spicy relish or did they just choose the name from a hat?). But what really made me weep sweet red white and blue tears of joy is it actually had actual crispy actual real bacon on it!! (all bacon here is this flimsy stuff more like thinly cut ham).

The one anti-American I caught them doing is they serve this weird mayonaise dip with the chips. I asked if the owner was American, because they're America-ing so well I thought maybe they were, but nah just an Aussie who thought it would be a fun theme restaurant. I need to take the owner aside and be like hey mate you're doing great here, fantastic, but ::whispers in ear:: we don't put gosh darn mayonaise on our gosh darn fries! And then Johnnie Cash started playing and I almost over-Americaed <3 <3 <3 <3 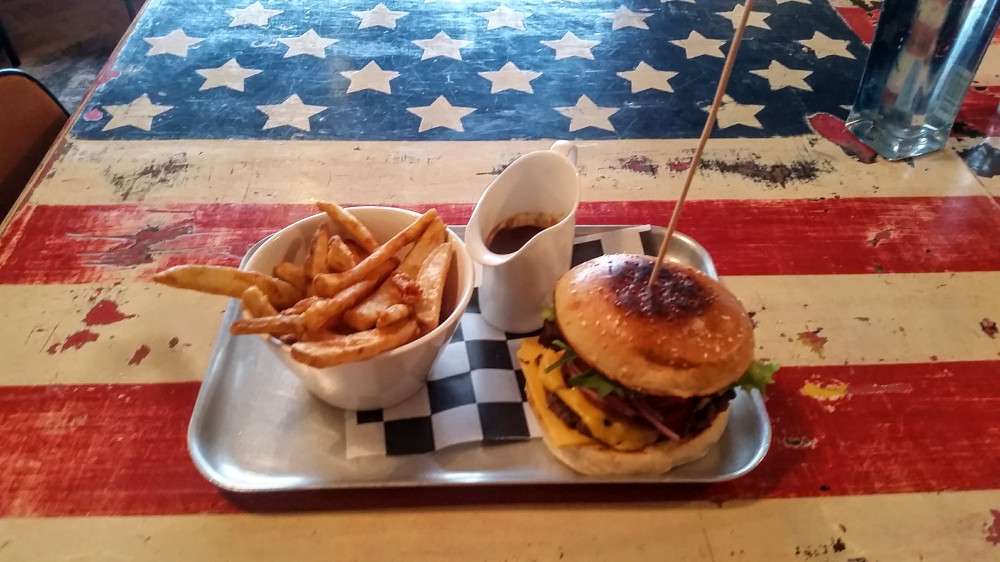 Gravy at my request because nothing goes on chips like gravy. And their gravy is thick and delicious!


From there I proceeded back up into the forest to this property this woman had called me about literally less than an hour after I had initially put the grocery store flyer up. Its in the very midst of the forest, has plenty of space I can drive up to and.... is just gorgeous! It's called Cloud's End and it has it's own webpage but my browser is half crashed right now so I can't seem to get it open. So it's definitely a go! Okay browser fully crashed and now in a different browser which has not yet crashed). But yeah look how perdy it is: 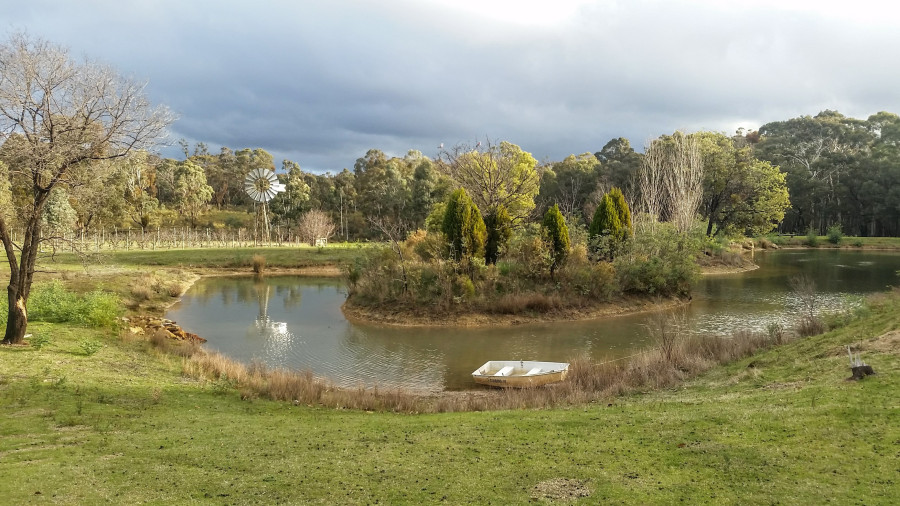 From there drove through more beautiful forest area to the small town of Guildford. Flyered there and then headed home, which took about two hours. Got home and...... do you remember? Because I didn't! THUMB TACKS!! Fortunately I didn't take my shoes off before walking in. But when I did sit down to take my shoes off there were half a dozen tacks stuck in the bottom and I was like D'OH! I then picked up some of the tacks but then I had to go to a meeting at the fire station.

Even though it was pouring rain I decided to walk because I much prefer walking than driving short distances. It was absolutely pouring though, I was thoroughly soaked by the time I got to the station, though not terribly terribly cold. I was wearing my wool navy sweater and naval bridgecoat and they did the wetsuiting thing they're meant to do where they kept me warm even when soaked.

And then when I got home from the fire station even though I had joked it would happen and you'd think by now I'd have finally remembered but nope I finally did step on a tack without a shoe on.

And that has been my day!