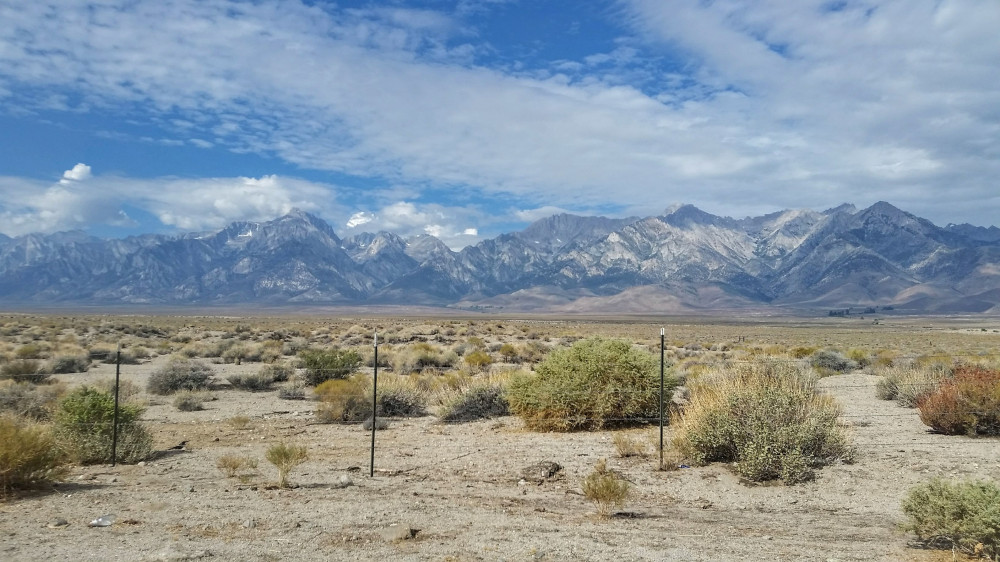 July 13th - Upon waking up and emerging from our motel room we were greeted by a spectacular view of the nearby mountains. Because there were no restaurants in Independence we were obliged to backtrack half an hour to the larger town of Lone Pine. In glancing at the wiki entry for Independence just now I notice it's actually the Inyo County Seat, despite being described in that same entry as a "tiny village" with a population of 669. On the way back to Lone Pine I took the above picture as soon as I didn't have buildings obstructing my view. 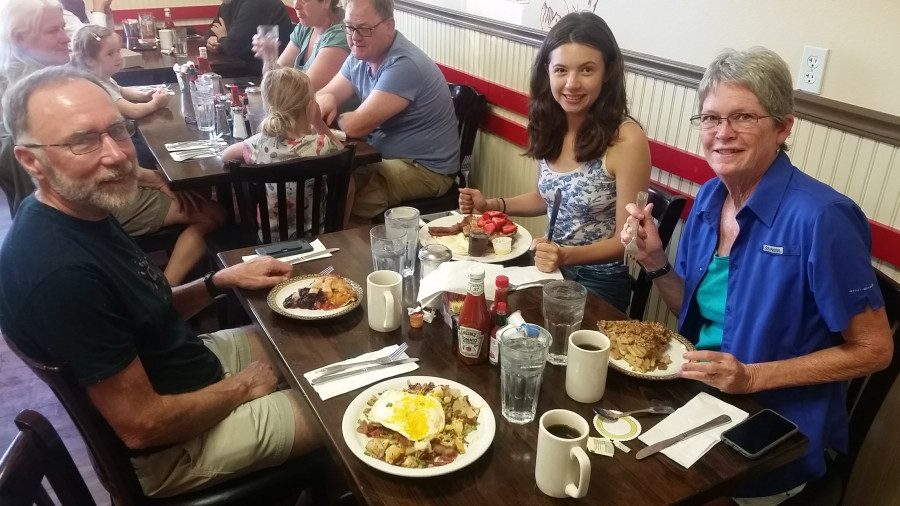 We ate at the Alabama Hills Cafe, a diner my parents have also come to be in the habit of stopping at on this route. They had many delicious looking things on the menu, including biscuits and gravy which I'd been longing for, but I actually ended up going for a dish, I forget what they called it but various things all sizzled up together in the griddle with a fried egg on top. Mom and dad both had pie like the total gangstas they are!! Kateri had some impressive stack of pancakes with strawberries that was on special and she got the last one much to the envy of a diner who later sat at the table beside us and tried to order it.
The namesake of the diner, the nearby Alabama Hills are a rugged set of foothills distinct from the high Sierras behind them, that have been used as ambiguously rugged western terrain in a great many Western movies (there's a movie museum nearby we have also never been to). The Alabama Hills Cafe had a lot of pictures of the rock formations about which inspired us on a sort of whim to drive the loop road around the hills. We decided it was well worth doing as we wound through the picturesque rock formations. We even found what looked like an old movie-set mineshaft (any major western aficionados think they recognize it??)). On parts of it that were private property there were some very unique looking dwellings and I surmised that I bet at least one of them is on airbnb! From there we headed up north on the 395 again, in the sage filled valley between the jagged Sierras on our left and small mountains on our right (what's over there to the right? no one knows!). By and by we found ourselves in pine forest around the turnoff for Mammoth (do non Californians know about Mammoth? It's kind of like Yosemite but not -- famous for skiing but I've always been there for the beautiful forest hiking.) Near mammoth we turns off for the Hot Springs with every intention to go swimming in them. It was once again oven hot as we got out of the car there. I have fond memories of swimming in the hot springs here when I was wee but I guess one too many people boiled themselves alive by going in the parts you're not supposed to go into, because the old swimming holes were all fenced off and there didn't appear to be any current swimming opportunities. Nevertheless we walked along the picturesque stream a bit. 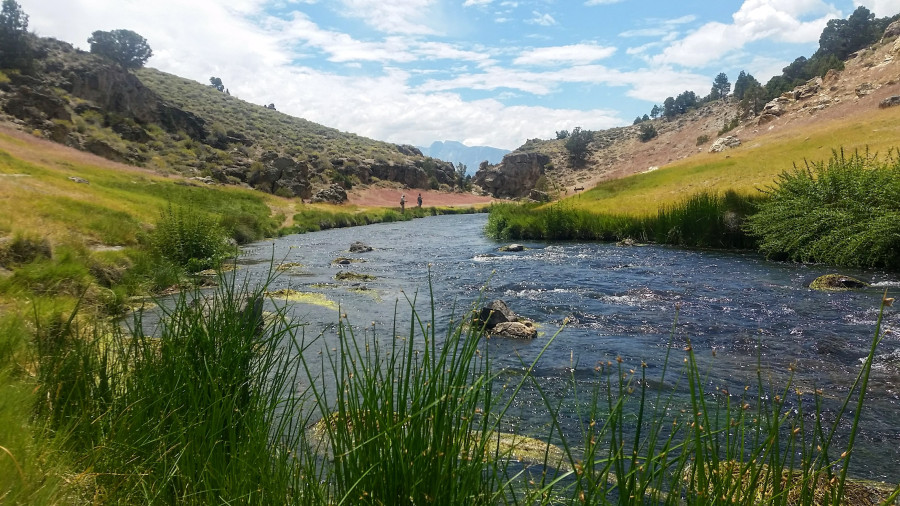 Just north of Mammoth as one comes back down out of the tree line is Mono Lake, a hypersaline endorheic lake. We stopped into the visitor center there. The lake had been drained to half it's 1940s size by the 1990s by water being redirected to Los Angeles, which threatened many birds that depend upon the lake for migration and breeding. Since then conservation efforts have one a legal fight the water waterlevel is once again rising to reach an agreed upon minimal level. We visited the famous tufa tower formations on our way back south but I'll get to that when I get to that!

North of Mono Lake we once again were winding through relatively narrow valleys. The next place worth mentioning is definitely WALKER BURGER. My parents had been advised of this place by my uncle's fiancee who apparently would some times come down this way, but during their Thanksgiving sojourns it had always been closed. Walker, it turns out, is an absolutely tiny town "census designated place," but this burger place is legit amaze. I had a half pound "western bacon burger" that was possibly worth driving all the way to this remote locality just for, as well as an extremely delicious shake. Everyone else was similarly pleased with their food. The outdoor seating area was really lovely and my pictures really don't do it justice, but it was like a pleasantly shaded garden with benches and a central grassy lawn, whimsical windmills, water features such as water pouring from one barrel to another to create that peaceful tinkling water noise. Really superbly lovely spot!

From there we had to nick into Nevada near Reno, where I think we were no longer in a narrow desert valley and surrounded by more signs of civilization, but by now I was drifting in and out of sleep even though it was only late afternoon (but again,I was still suffering from jetlag!). Then we got back into the mountains just north of Tahoe. During moments of wakefulness I was aware of beautiful mountain valleys around us. Finally we pulled in to our destination town of Loyalton, with which a population of 769 is smaller than Birregurra. Our bed and breakfast was a beautiful Victorian house just on the outskirts called the Gilded Drifter (it's hard NOT to call it the Gilded Grifter though!). During the weekend our family would have the whole place booked out but on this first night it was just us (me, my parents and Kateri) and some strangers in the other rooms whom we only saw extremely briefly (I think there were two different couples who both arrived late at night). All the rooms were named after famous American authors of a level of obscurity that I didn't actually recognize any of their names but Kateri (again, an English major) did and was quite tickled by it. My favorite part about the place was that it had a really cute cozy little library room. In which I enjoyed to sit and read my book.
Also it so happens that there was a flash fiction writing contest I intended to participate in and the topics were to be announced this very evening! I was very unsure I'd have time to write a flash fiction in the hubub of a busy weekend with the family but I was planning on giving it my best go. I checked my email and found that I had been assigned to write a romantic comedy set at a bus stop involving a chihuahua! Would I be able to accomplish such a thing in the next 55 hours?? 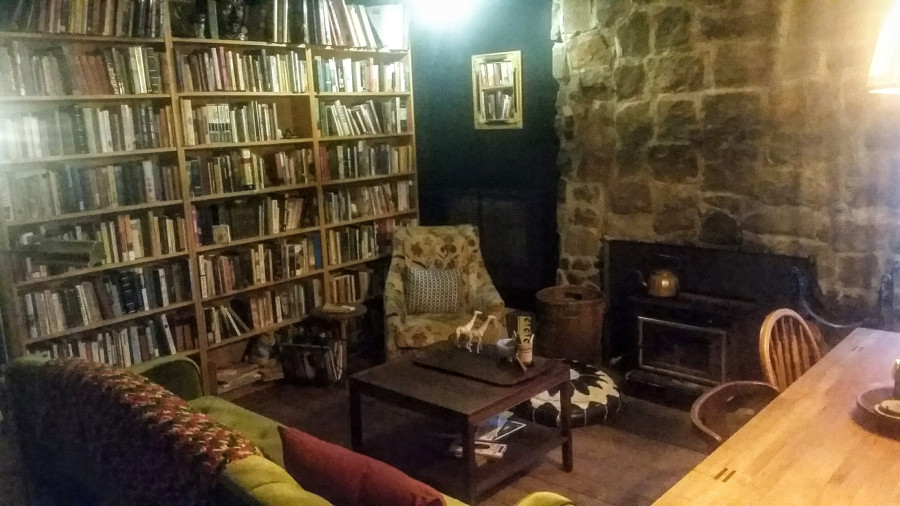