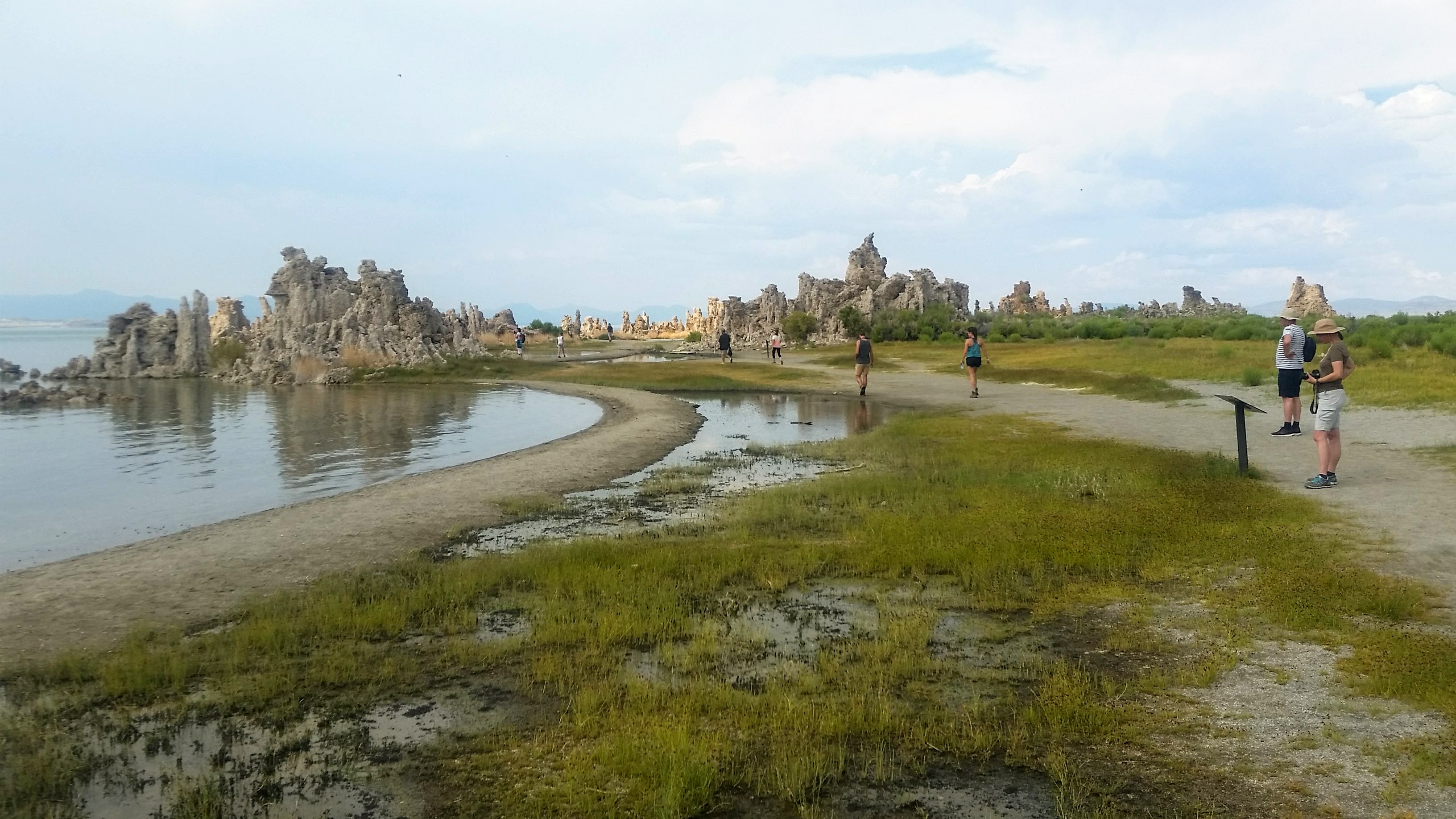 Monday, July 16th - My parents, cousin Kateri and I departed the cheerful Gilded Drifter B & B Monday morning and drove through the sunny Sierra valleys to retrace our steps. Through the hills and vales, down into the broad mundane valley of Reno, back into narrow mountain valleys on the 395 and... amid wildfire smoke and the smell of burning chaparrel to Walker Burger for lunch! Just as absolutely delicious as on the way up! 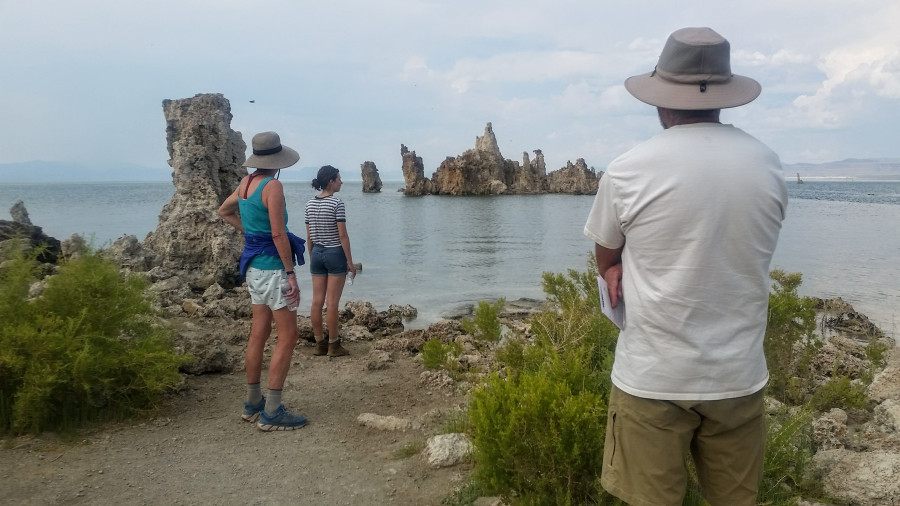 From there we proceeded on down to Mono Lake and this time went to see the Tufa Towers. Apparently they form where there were underwater springs, the minerals in the spring water immediately precipitating out their mineral contents on contact with the cooler fresh water to slowly over time form a stalagmite-like tower reaching up from the bottom. The previously mentioned extreme lowering of the level of Mono Lake by Los Angeles' thirst for water has exposed these formerly underwater tower formations. A significant problem with the reduction of the water level was that formerly isolated islands on the lake critical to migratory birds became accessible to coyotes and other land based predators. In this picture we are looking at an osprey nest ... which though dramatic is probably not one of the threatened bird species. Wait Mono Lake has no fish (too saline).. is this actually an osprey? Maybe it lives here while getting fish from the tributary streams? Hmmm mysterious. 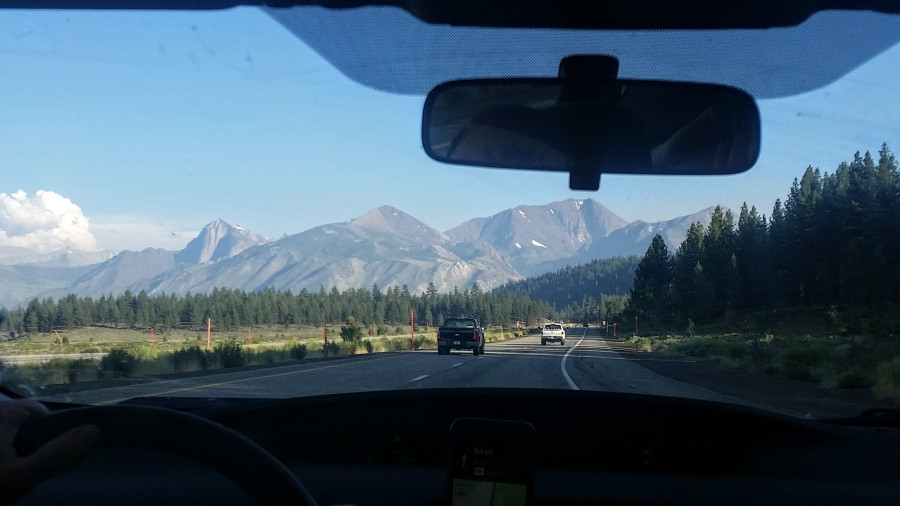 From there we proceeded to a volcanic crater just beside the lake getting a little lost on 4x4 tracks in our non-4x4 prius on the way. To our west toward the Sierras at this time there was a solid white wall of wildfire smoke that was steadily getting closer to us and was a bit concerning. We poked around the crater nontheless, there was cool obsidian. We then continued.
We stopped again a little later at another cindercone just near mammoth. What can I say we really like volcanic rocks. 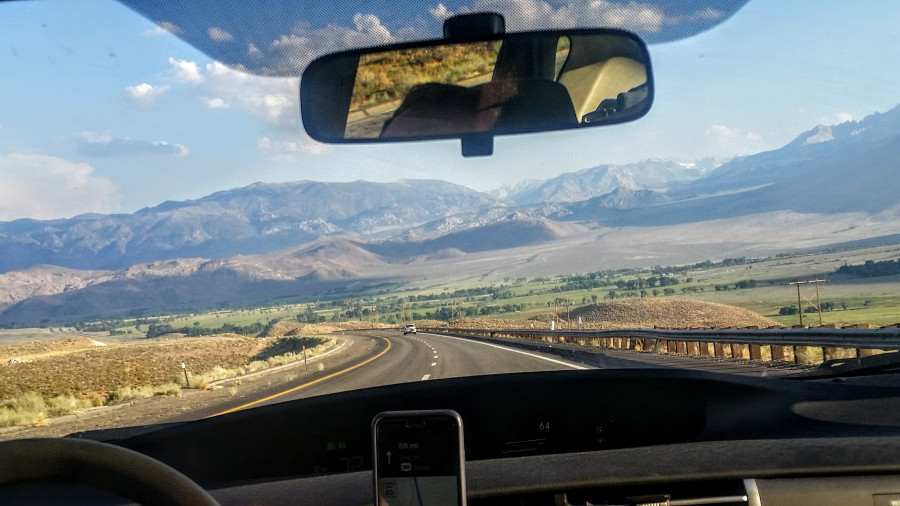 I have a particularly large number of scene setting photos because I was updating a certain Venezualan senorita on roadtrip progress ;)

Also at this time, President Trump was in the process of making news for insulting our NATO allies pretty much as much as he could at a recent summit and then meeting with his bff Putin and saying that Putin says there's been no Russian meddling and that about settles it. The world we're living in!

We once again stayed at the same hotel in Independance. Got pizza at one of the immediately prior towns (Big Pine?).

Tuesday, July 17th - We proceeded on south, stopping in the flat hot bland town of Lancaster (has anything interesting ever happened in Lancaster? Has it even been the setting for any exciting stories? It seems a thoroughly bland place), for a picnic lunch in a park. Then west along the foothills north of Los Angeles which were often covered in orange groves or other hearty slope-growing crops. Finally emerging on the Pacific coast and proceeding north among expensive beach houses with the occasional giant palm tree looming over them like a toilet brush. Finally we arrived in Santa Barbara to drop off Kateri at the suburban house where she and her boyfriend rent some rooms on the upper floor of a stucco suburban house. Also met her boyfriend, whom I hadn't met before but apparently my parents have. He seemed a swell fellow. Some of these cousins are surely due to start getting married soon. I hope so I do enjoy attending weddings. Also I at once recognized my grandmother's style in a painting on their wall that I haven't previously seen. I do so love her paintings. All the relatives have them all about their houses and its fun visiting relatives whose houses I've maybe never been to before and seeing previously unseen paintings by "mum-mum."

From there we could have headed home inland through the heart of LA but instead, as apparently my parents have been in the habit of doing (they come out this way fairly frequently because mom's dad lives in neighboring Ventura county), we went down the Pacific Coast Highway. This iconic road winds right along the coast practically in the spray of waves in places. In Malibu we stopped at a sandwich place (actually a sandwich bar inside an upscale grocery story) they are in the habit of visiting on this route. I ordered a mammoth sandwich at this upscaley place and then had to gloat to my friends in Australia because at whatever it came out to ($7? $8?) you couldnt' even get a dogfood quality fastfood burger in Australia. And this at a fancy place in Malibu frequented by people any one of whom looked likely to be a celebrity I didn't recognize!

From there we continued on down the coast before eventually turning inland somewhere in Los Angeles county and finshing up with a quick slog through the urban sprawl unil we finally got home. The End! 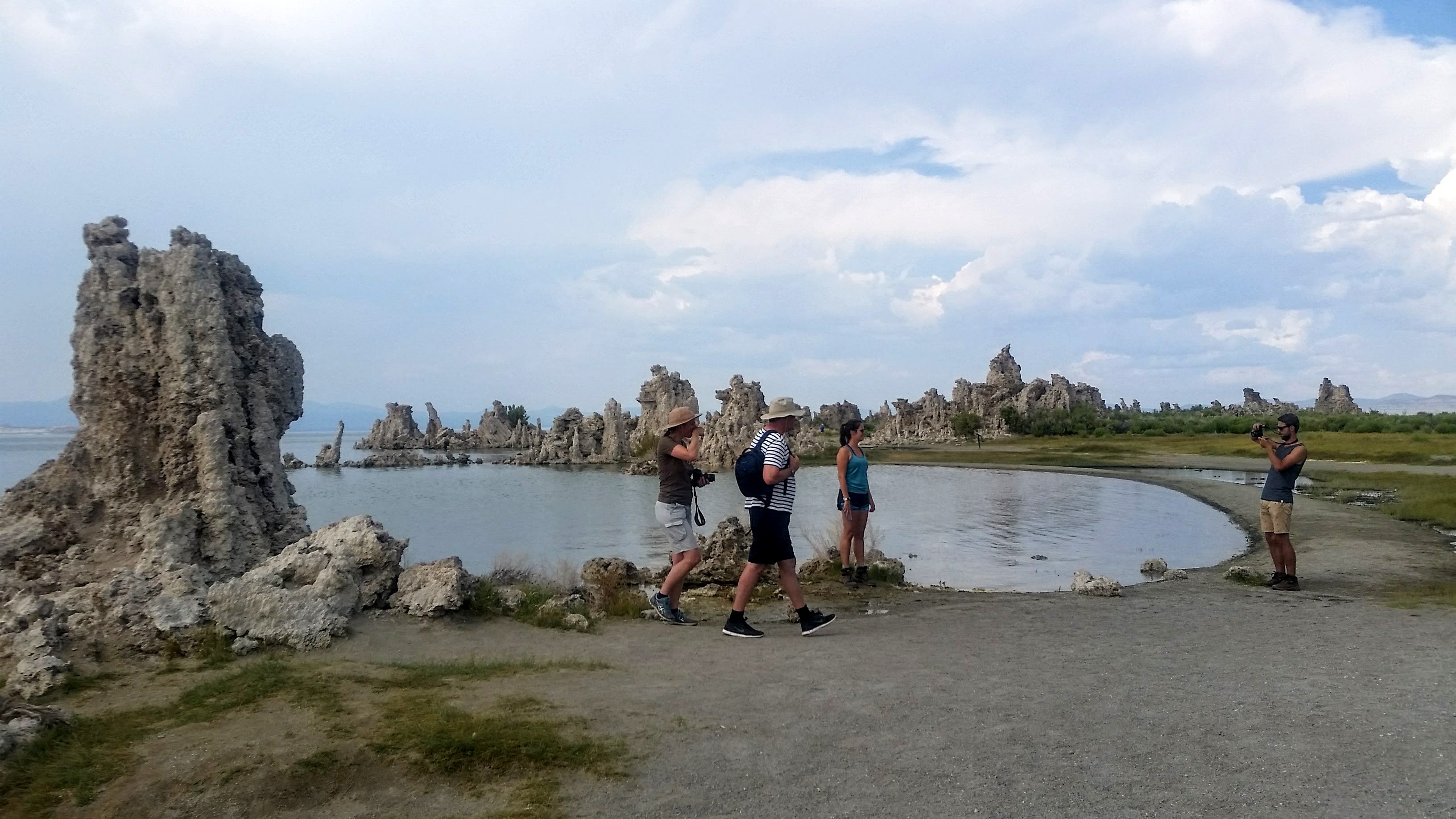