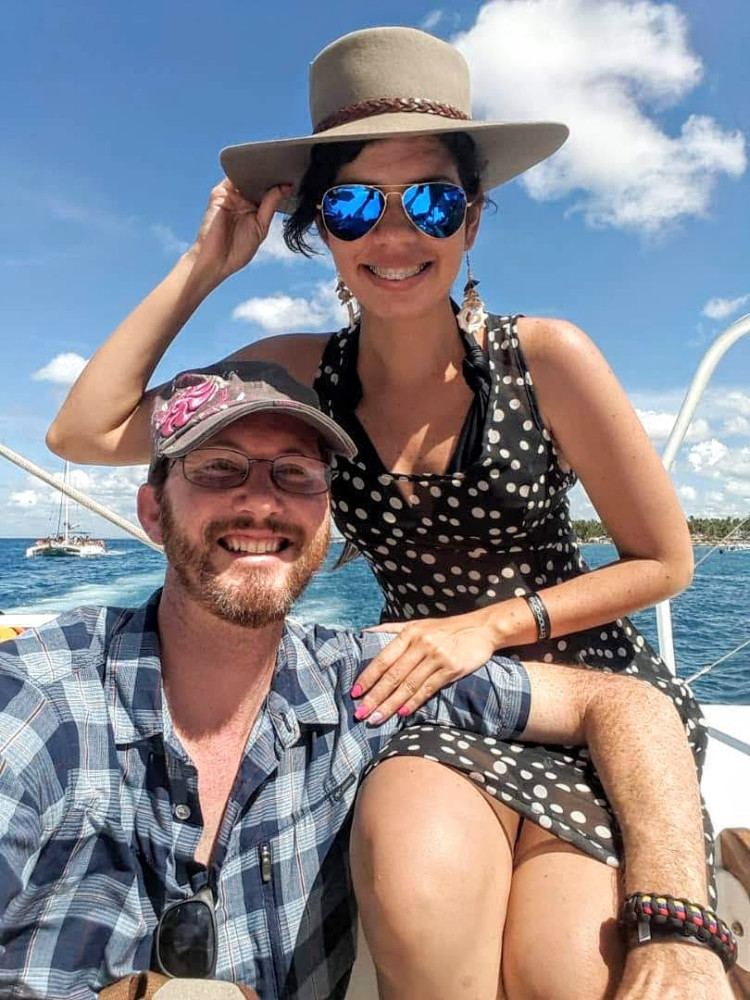 August 15th, Dominican Republic - Bright and early we embarked on a minivan shuttlebus at our hotel, that had already been collecting tourists from neighboring hotels, and I was slightly irked that the available seats weren't side by side. So for a precious hour of our vacation we were separated. Finally we turned off the big main highway to take a small road that wound through walls of thick scrub until we came to the cute little coastal town of La Romana. Here were joined a whole bunch of other tourists who had been disgorged by other minibuses, and were ferried out by small boats that could beach on the white sand out to bigger catamarans that could not come in. From thence, with despacito blasting on the sound system we and about three other large catamarans departed as a fleet bound for the Isla Saona. 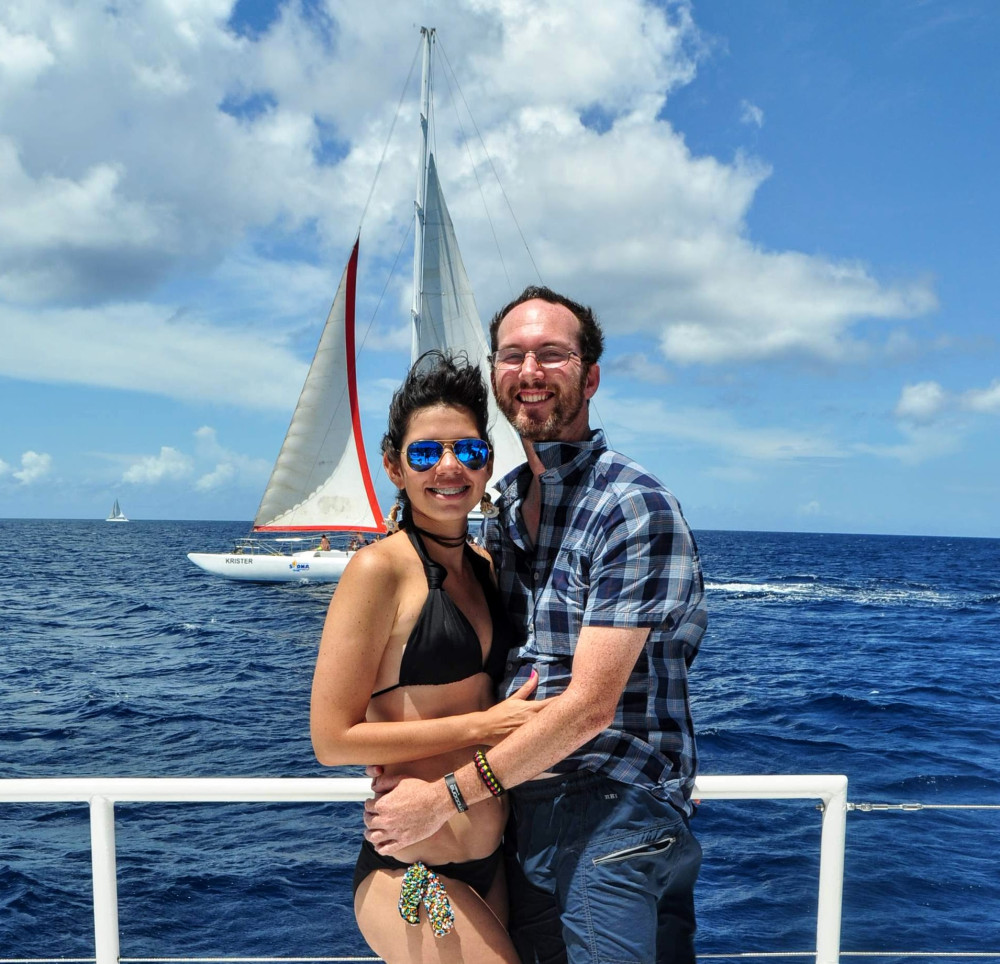 Look look, she's Cristina, I'm Kris, and the boat behind us is the Krister! (click for bigger version because I know you need to confirm this!)

Plastic cups of rum and coke were passed around freely ... and I dreaded to see them soon flying into the water by the score but I actually didn't see this happen at all. The only thing that I saw go into the water was my own sunglasses, which leapt from where I'd hooked them over the top button of my shirt, and scuttled across the deck like a crab to dive into the water before I even knew what happened. Soon after getting underway the crew raised the sails and doused the engine, much to my pleasure. The sun was bright and warm, the air was fresh, Dominican and latin music continued to play festively on the sound system, many people danced, the rum and coke flowed. I could definitely understand why this was rated "#1 of 546 things to do in Dominican Republic" by Trip Advisor!
Other passengers seemed to once again be from all over the map, but Americans United Statesians seemed very underrepresented, with only one or two people seemeing to come from there (actually the only one I can positively remember talking to was a US/Dominican citizen and had moved back to DR from San Diego because it was "too expensive" there). I guess they prefer to go to more developed Caribbean countries? 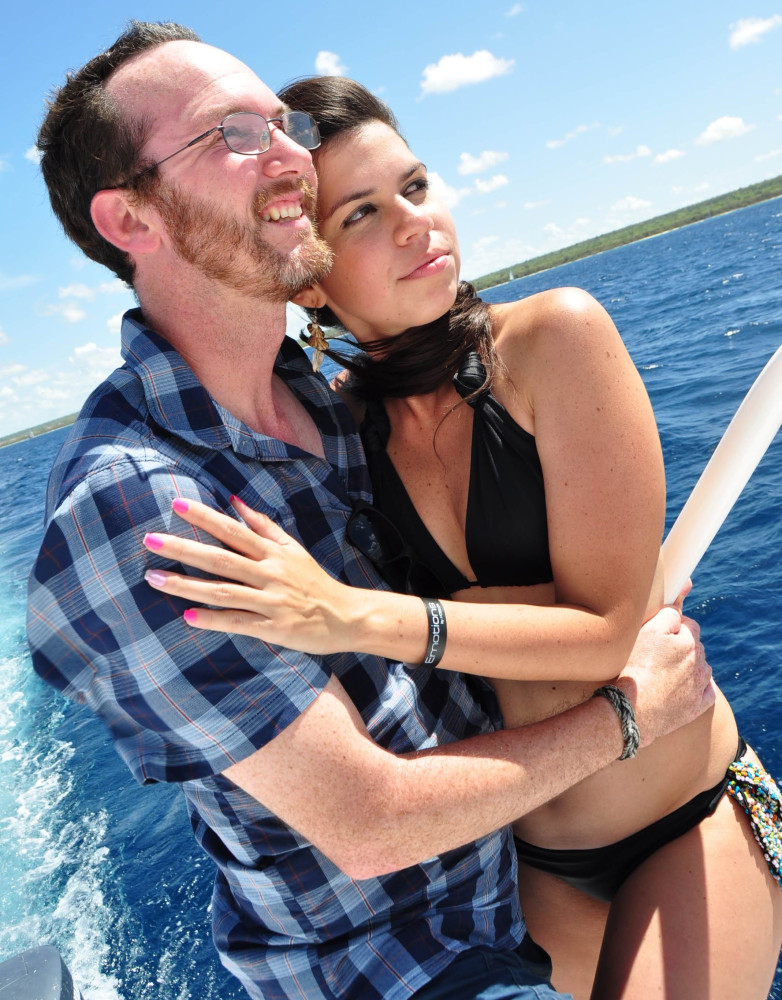 I really like her sort of Mona Lisa smile here (:

Also on board was a professional photographer who makes his money taking pictures no doubt of couples like us and then selling us the photos. I felt he was quite alright at it and later on the beach where he had his laptop set up under the palm trees on an otherwise wholly electricity-less undeveloped island he burned his 46 pictures of us onto a CD, which I paid for and then wondered where the heck I'd find a CD reader in this day and age. 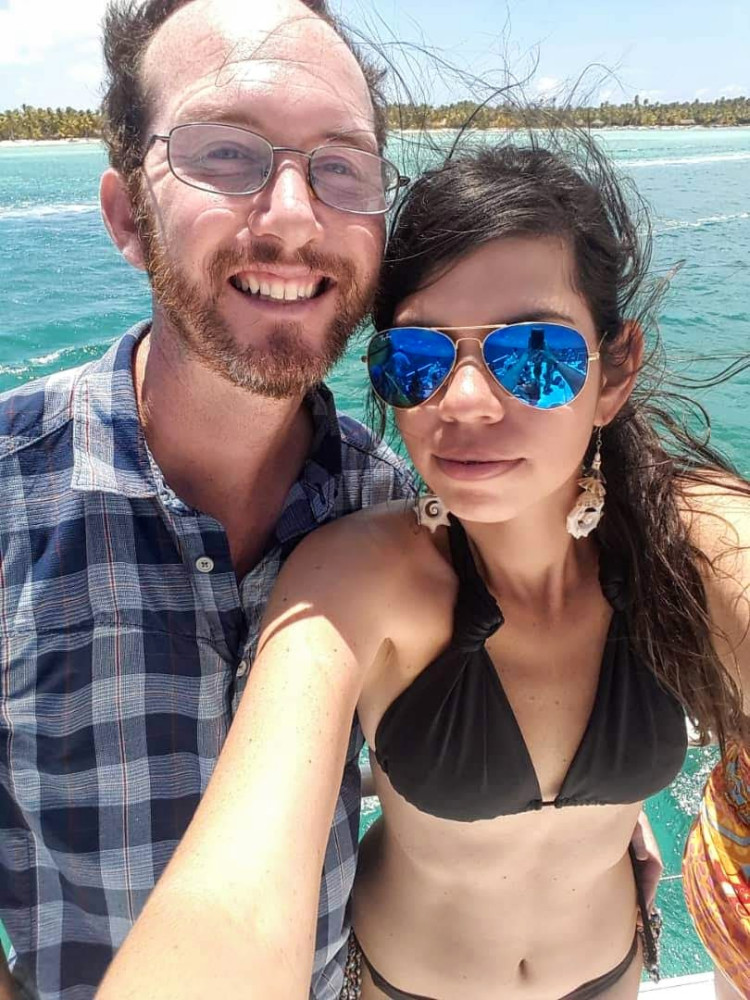 Though I quite rather think we got some cute ones ourselves

Finally we pulled up to the turqouise waters around a classic Caribbean island of flat aspect with nothing but palm trees and white sand beach as far as the eye could see in either direction. The sails were doused, anchor dropped, and once again the smaller boats nosed up like ramoras to take us all aboard. The square nosed little landing craft took us the short distance to the beach and off the front end we were like storming the beaches of Normandy! Okay maybe not quite. Too soon? 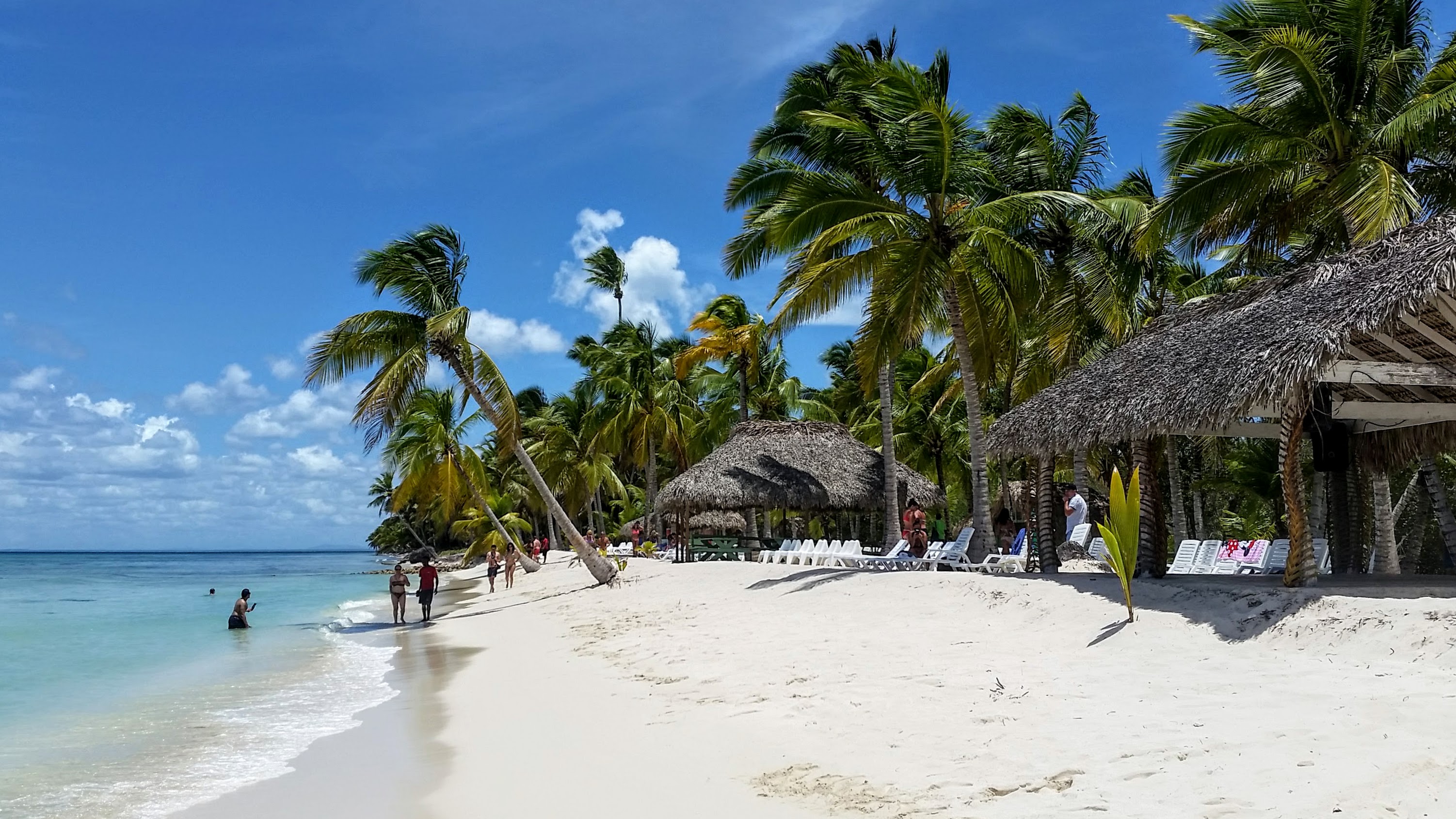 The beach had many rustic cabanas and beach chairs. We were told that lunch (bbq, included) would be at 1:00 and we'd depart at 3:30. Until then we were set free! The sand was hot on our feet, the beach was beautiful. We splashed out into the water, which was crystal clear and a pleasant temperature. While lovingly twirling her around in the weightlessness of the water I brought up something that had been on my mind -- let's make this officially official official. You know, "facebook official." She readily agreed, I think we hardly needed to have a talk about it at this point, but clarity of communication is really key. And these crystal clear waters seemed conducive to clarity ;)

In what seemed like no time we saw people queuing up for lunch and we went ashore for feeding. There was a picnic table just beside the food table that was almost abandoned because of all the bees around it. Yes honeybees, not yellowjackets. Someone must have spilled a lot of rum and coke on the table (since bees don't care about your meat, only sugar). She seemed unafraid of the bees herself so we sat at this conveniently vacant table laughing at our good fortune. Even, I was about to gently remove a bee from her cup and she said "no, es lindo," -- she knows the way into my heart!
Food was some delicious bbqed chicken, pasta and watermelon. Also rum and coke continued to be free flowing. 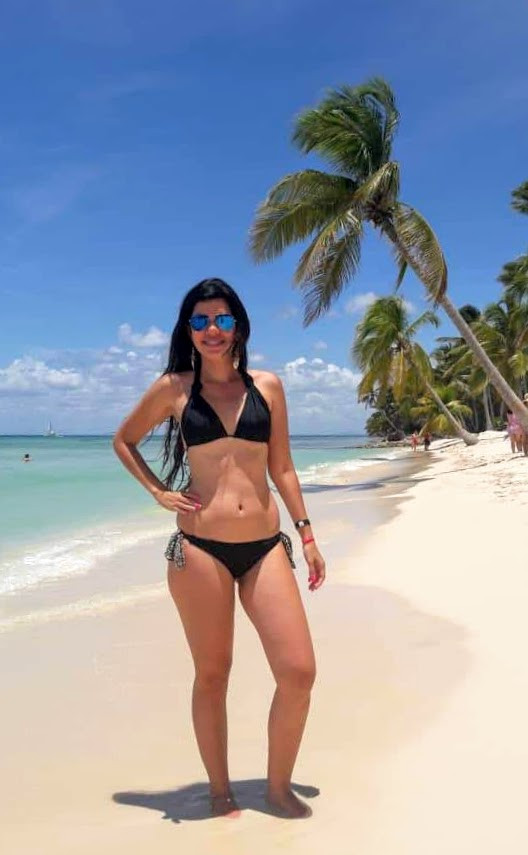 I really wish we had gotten the photographer man with his relaly good camera to take a picture of us in about this location. He stopped taking photos once we got off the boat though. We took one with her camera but I wish I had realized her phone camera really isn't very good, we should have at least used mine! :-X

We then resumed our frolicking in the delightful waters until we saw all the tender boats pulling up their anchors and starting their engines. I thought we'd return to the big catamaran but instead, once boarded on the little vessel we motored up to coast of the island to a place where there had once been a big dock and now just the pilings remained, and we were given snorkles (I dreaded to wonder if it had been cleaned since someone else's mouth had been on it) and told we had half an hour to see all the fish here. Cristina, not a swimmer, kept her lifejacket on like most of the passengers, and I towed her out of the crowd in the immediate vicinity of the boat like some kind of adorable gorgeous little barge. I think she really enjoyed it and maybe next vacation we should book a scuba diving excursion .... but maybe we should work on her swimming first.

Once we reboarded we headed up the coast a little further and were let out again in a place where the shallow water extended really far out from the island and everyone frolicked about in the waist deep water here. By now many strangers had met eachother and there was more joking around and chatting between groups that hadn't come together, the alcohol having been flowing all day probably helped as well --in fact now they seemed anxious to empty their rum stores, wading out to us with cups--, and everyone was very friendly and having a grand old time. Then we re-boarded, returned all the way back to La Ramada at high speed by motor in this craft (but still with the despacito and other latin music -- we joked they only had once CD as we soon recognized the same songs returning, but no one minded). Bus back to the hotel once again I was unable to sit beside Cristina, hey not to sound clingy but we were getting down to 18 hours left together for who knows how long! 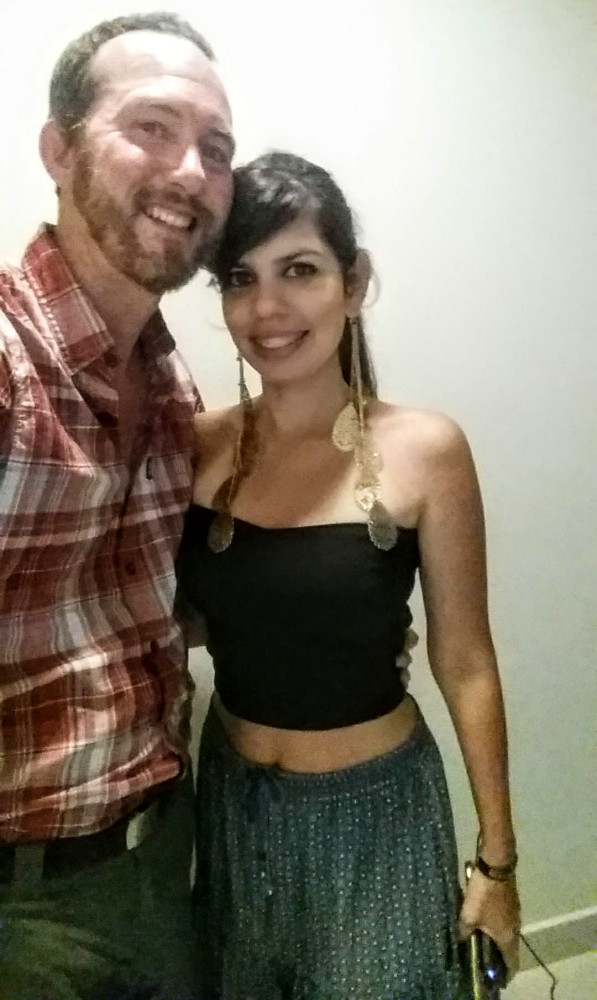 That evening we got all dolled up (or she did, I am like an undomesticated beast that cannot be dolled up) to finally go out to that hotel discotheque, but ultimately ended up chatting in the deck chairs by the beach. I'm not one normally to weigh in on fashion but I just loved her outfit: long skirt, corsetty shirt, long jangly earrings ... ::heart eyes:: 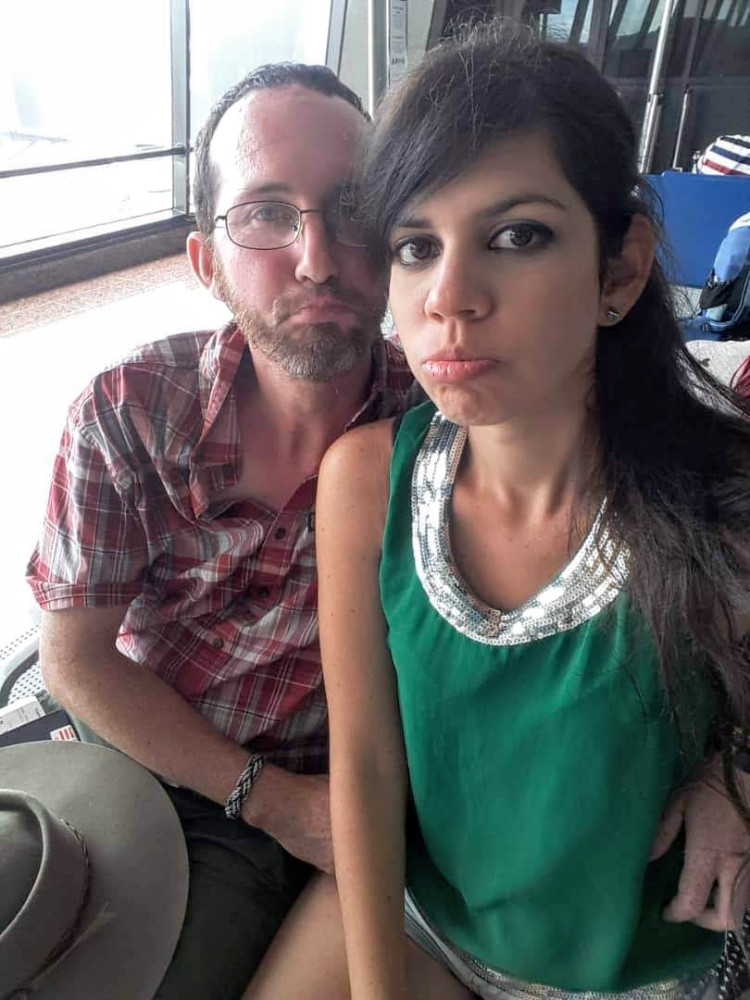 Playing up our sad faces at parting

August 16th - Her flight was at 11:40 and mine at 12:40. Despite having more than enough time we planned to arrive at the airport at 8:00 "because this airport is very lazy," as she said. Sure enough it well and truly took a very long time for her to check in with the Venezualan airline, which seemed to distinctly not have its shit together. Then we stood in line at COPA, the Panamanian airline, for my ticket, which was faster but we were among the last in line since we'd been busy with the other. Only after she had checked her checked luggage did we realize she still had the honey I'd brought her in her carry on. We were both very afraid it would get confiscated at security, since honey is considered a liquid and can't be carried on in quantities over 2oz ... when her bag made it through the x-ray without being stopped I wanted to rejoice and give her a high five but like smugglers we had to furtively hide our joy until we were well away. And THEN when we sit at our gates (our flights were side by side gates using the same seating area!) she pulled out bottles of water and a soda for each of us from her carry on ::facepalm:: if I had had any idea I would have told her to make sure she didn't have anything ELSE that could hae gotten security's attention on her bag! Good work security ahahaha. Kindly airline official allowed us to hug until the last possible minute after everyone else had boarded and they were closing the gate. Despite her flight being officially an hour before mine it had been a delayed and then I had literally just enough time to walk over to my gate, stand for maybe two and a half minutes, and board my plane. The end.

Posts from This Journal “cristina” Tag

Posts from This Journal “cristina” Tag